We strive to rethink everyday living with a more eco-friendly perspective, which is why The Spruce has partnered with Treehugger, a modern sustainability site that reaches more than 120 million readers each year, to identify the products that are leading the charge in cleaning products that are less harmful to Mother Earth. Check out the 2021 Best of Green Cleaning Awards here.

There are lots of reasons to move into a tiny home, and one of the most popular is how eco-friendly they are. In fact, it’s the third most common reason people choose to live tiny, according to a research study done by Maria Saxton, a PhD candidate at Virginia Tech. In the same study, she found that the ecological footprint of people living in tiny homes was almost half of the average American’s footprint.

But what exactly makes a tiny home so much less harmful to the environment than a traditional home? A lot of their eco-friendliness hinges on their small size and the personal choices of the people living inside. We’ll explore that and more as we look at five reasons tiny homes are so eco-friendly.

The size of tiny homes ranges from 100 to 400 square feet. That’s not a lot of space, especially when you compare it to the average American home, which is 2,300 square feet. But when it comes to being eco-friendly, being “tiny” is a really good thing.

The smaller the space, the less energy it needs to power, heat, or cool the home, which is good for the environment and your wallet. This means that even if someone used a traditional heating and cooling system hooked up to fossil fuels, they’d still have a smaller ecological footprint than a traditional home.

The small size also allows tiny home owners to get experimental with renewable energy sources that would be too expensive to install in traditional homes, like a completely off-grid solar or water system.

Paul O’Connor and Annett Welss live in a tiny home in Byron Bay, Australia, with five chickens and their cat, Franky. Almost three years ago, they decided to move off-grid and use solar energy as their main power source.

Their 15-panel system is enough to power their entire home, all of their appliances, including an air conditioner, and their electric vehicle.

“We don’t have to sacrifice any modern-day amenities or luxuries, but in our case, they don’t cost the earth,” Welss said.

They’ve also set up a 10,000-liter rainwater system, which they use for all of their water needs, including laundry, showers, dishes, drinking and cleaning.

Both systems have left their utility bill at $0 per month, while reducing their ecological footprint. Win, win!

The limited space in tiny homes almost demands that most people downsize in order to live comfortably. Less consumption equals less waste, which is better for the environment.

In Saxton’s study, most people reported downsizing to move into their tiny homes. Once they moved in, most saw a huge decrease in their shopping habits.

“Apart from weekly grocery shopping, we only buy things when we really need them,” Welss said. “Since we live in a small space, we have to be mindful of storage, and we don’t want to accumulate stuff.”

Less shopping combined with not having to pay utilities on their off-grid power and water system  has allowed them to save money and invest in an electric car.

Composting toilets have become common in both mobile and stationary tiny homes. This is because they eliminate the need for a black water tank and the compost produced can be used to improve the health of the soil. However, they are not a must in a tiny house build, and there are pros and cons to them.

The primary drawback of composting toilets is the price (and possibly the smell, but a urine diverter and a good ventilation fan can help). They can range from a couple hundred dollars to almost $1,000. But it might be worth it. Older toilets use between 3.5 and seven gallons of water per flush, and energy efficient toilets use over a gallon, according to the Environmental Protection Agency. How much water does a composting toilet use? Zero.

Welss and O’Connor opted for a renewable biogas waste system, which turns food and human waste into fuel for cooking. They also created a natural reed bed filtration system to filter their greywater, so they can use it again in their garden.

5. Builders Can Use Recycled or Sustainable Materials

Tiny houses are so small owners can experiment with using different recycled materials or alternative building techniques that would otherwise be too expensive in a traditional home.

Recycled wood, metal, natural wool insulation, and concrete are just a few of the eco-friendly materials commonly used in tiny house builds. They can also help cut down on the cost to build a tiny house and reduce the amount of waste that ends up in landfills. Even purchasing a pre-owned tiny home is good for the environment, because you’re reusing those materials.

As tiny homes become more popular across the globe, its eco-friendliness is just one of its many benefits. It’s important to note that most of its eco-friendliness rests on the choices of the people who live inside. But, the small size makes it easier and more cost-efficient to make those eco-conscious choices. 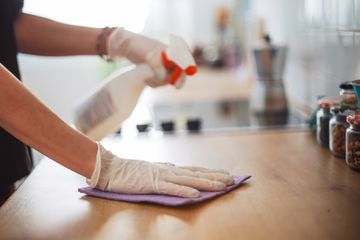