Melissa Epifano
Melissa is a news writer for The Spruce. She covers a wide range of topics including trends, decor ideas, and design tips.
Learn more about The Spruce's Editorial Process

Future historians and design experts could easily call the last few years up until now the "Mid-Century Modern Revival" era. The design movement that spanned several decades seems to be stretching out into another long trend cycle for the foreseeable future. Its simplicity and timeless characteristics make it appealing and almost too easy to work into any room—whether it's already designed with this style in mind or has a different look completely.

To pay homage to the style, there are endless mid-century modern-inspired options out there that will keep you aligned with your budget and design goals. 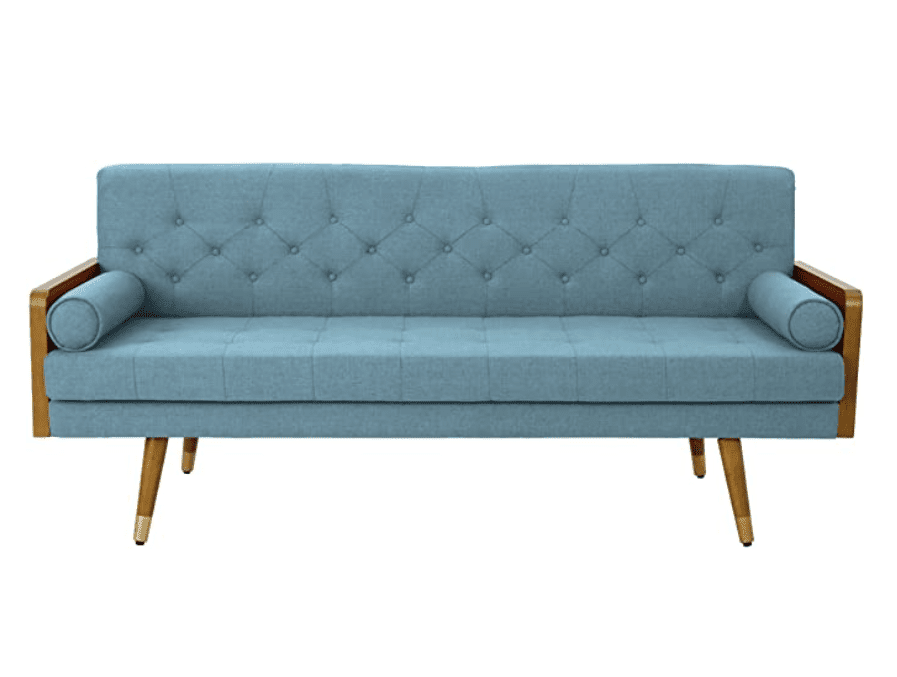 Tapered legs and sharp lines make this sofa a great choice when you're trying to design a living room inspired by mid-century modern design. The blue fabric is a much-needed characteristic that'll make it stand out from any classic gray, cream, or beige-colored couches. 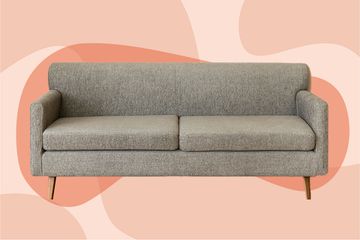 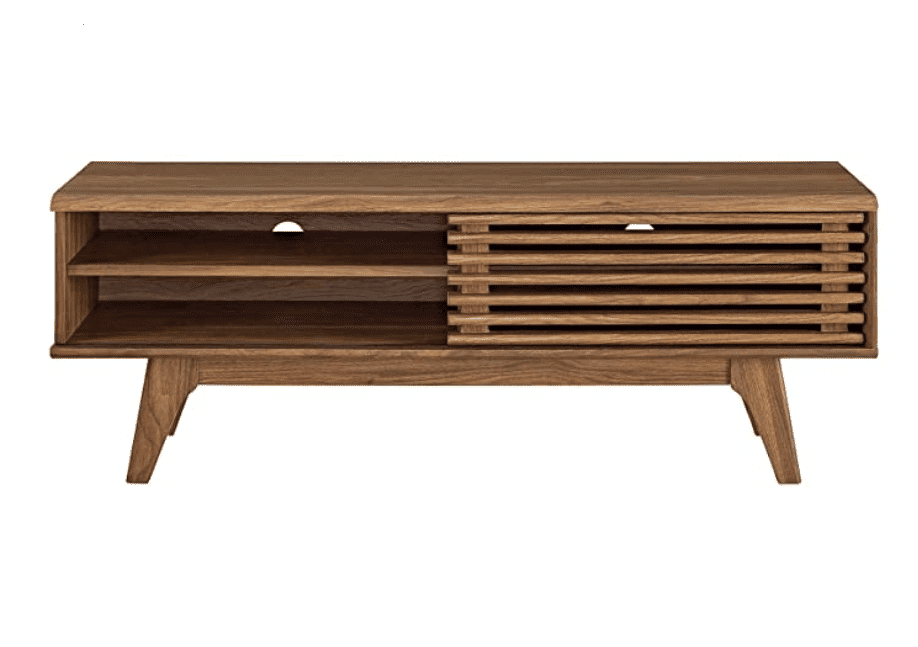 One of the best ways to incorporate mid-century modern-inspired design is through media consoles—they're both functional and stylish. There are plenty of options that come in the classic mid-century modern silhouette and you'll be boosting the available storage space in your home and creating a nice home for your TV. 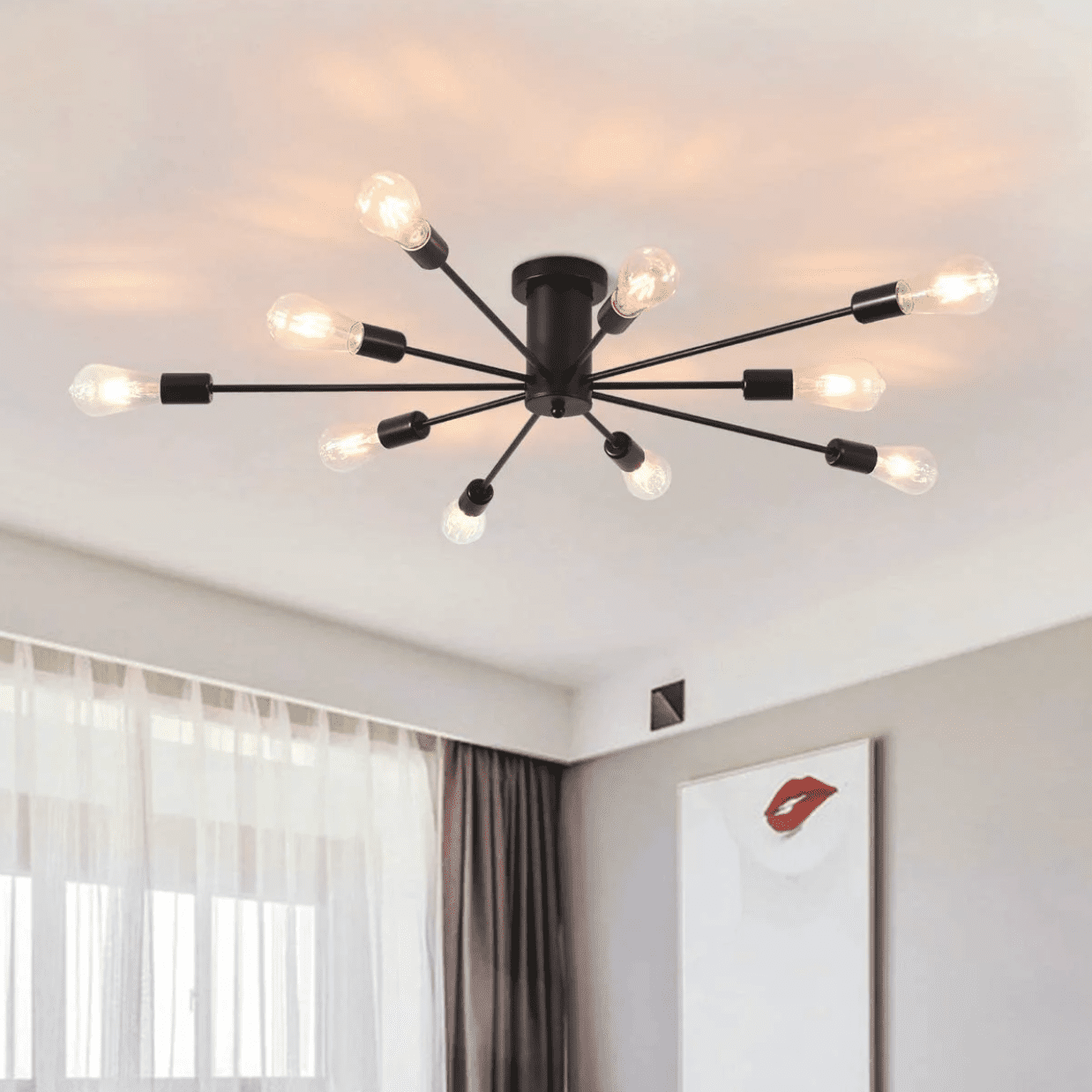 Sputnik-style chandeliers are named as such because of their resemblance to the first artificial satellite that was sent up to space in 1957. The long prongs of these light fixtures stick out like the antennas on the satellite. Though they looked different decades ago, this modern version is a nice nod to the original with a more updated take on the shape. 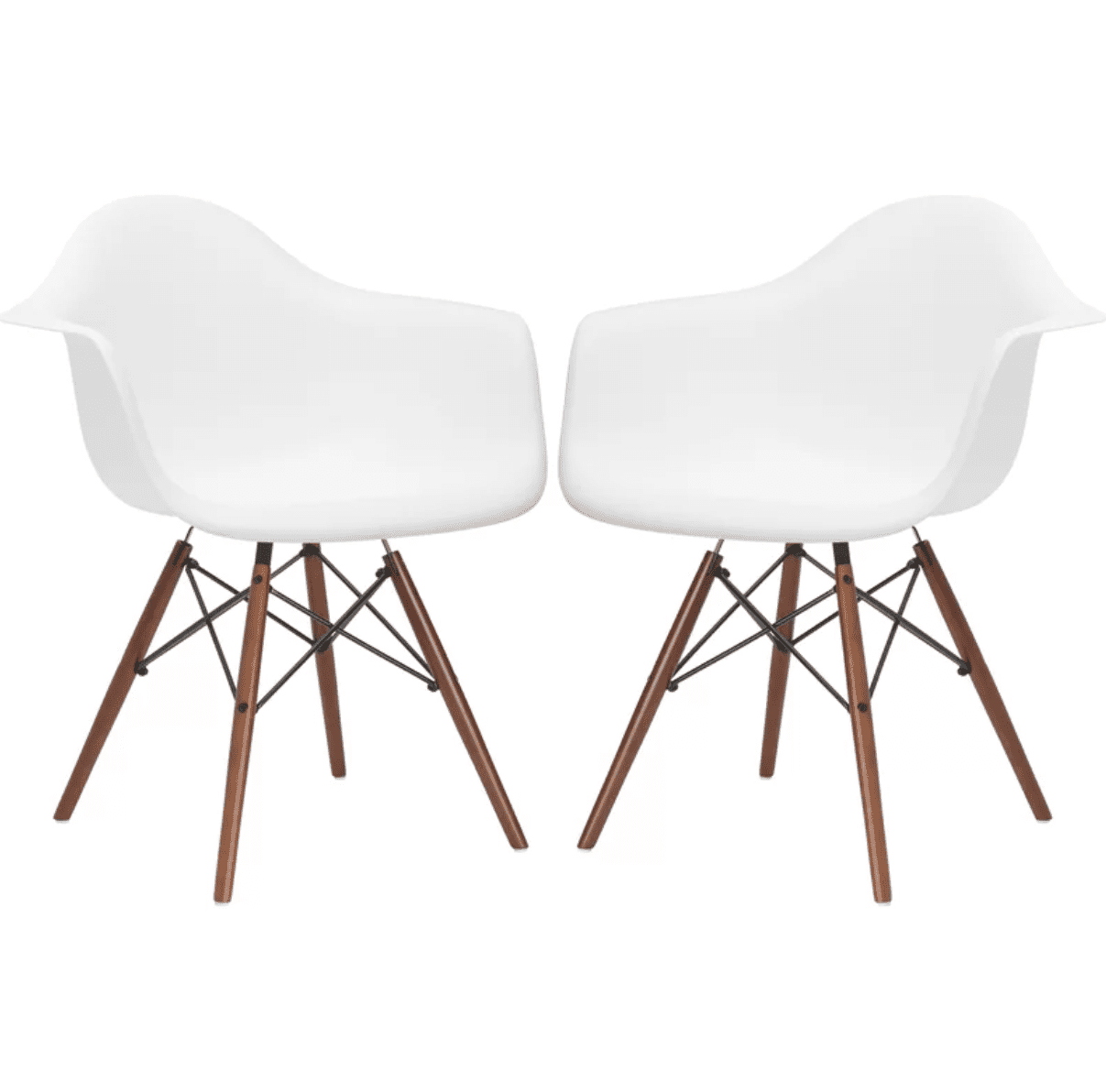 Architect Eero Saarinen was responsible for designing quite a few fantastic furniture items during the mid-century modern era, including the famous Tulip table and Tulip chairs. The tops of this two-piece set look similar to the originals, but rather than the rounded pedestal base, these have wooden tapered legs. This seating set is a fantastic and affordable addition to any dining room or kitchen. 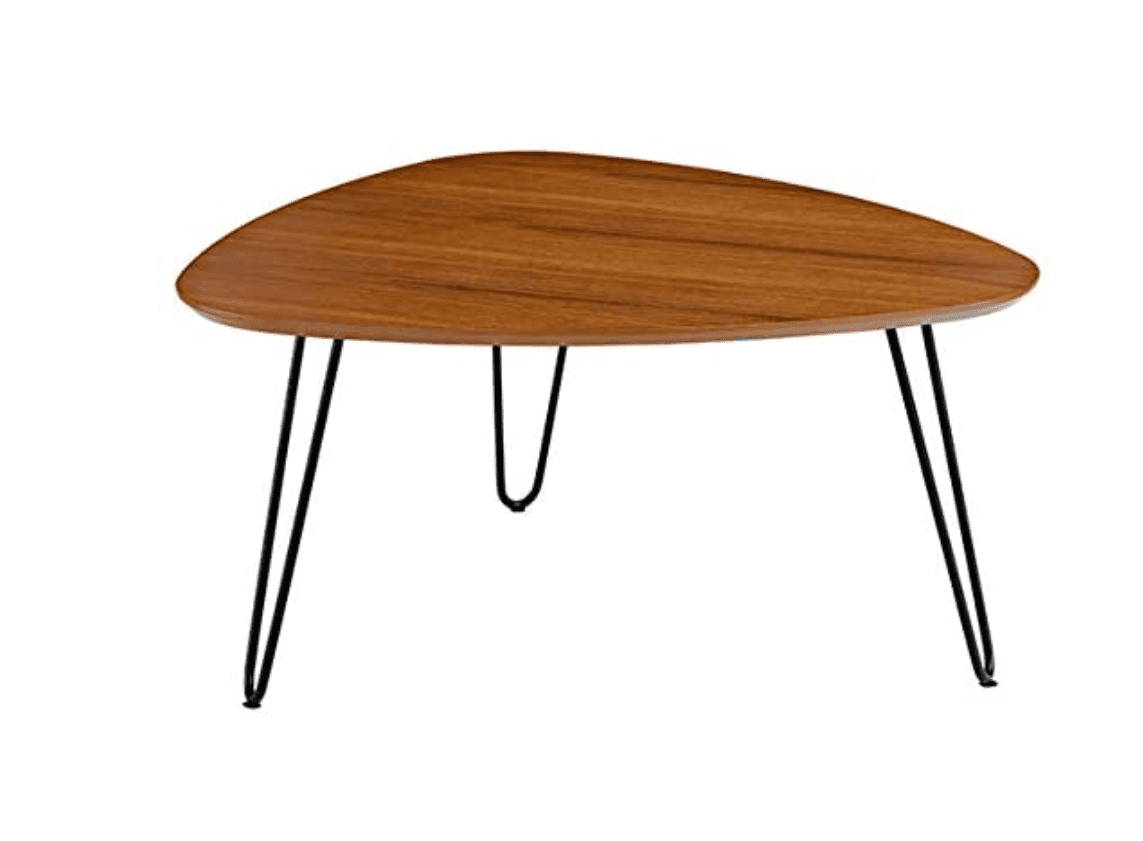 Tapered legs are undeniably mid-century modern, but they're not the only popular style. Hairpin legs were also extremely popular and have also seen a resurgence recently. Utility-wise, they were made of little material and stylistically they fit into the simplistic and sleek appearance homes were implementing. Coffee tables, such as this one, are ideal for showing off the shape and look and really embody the style. 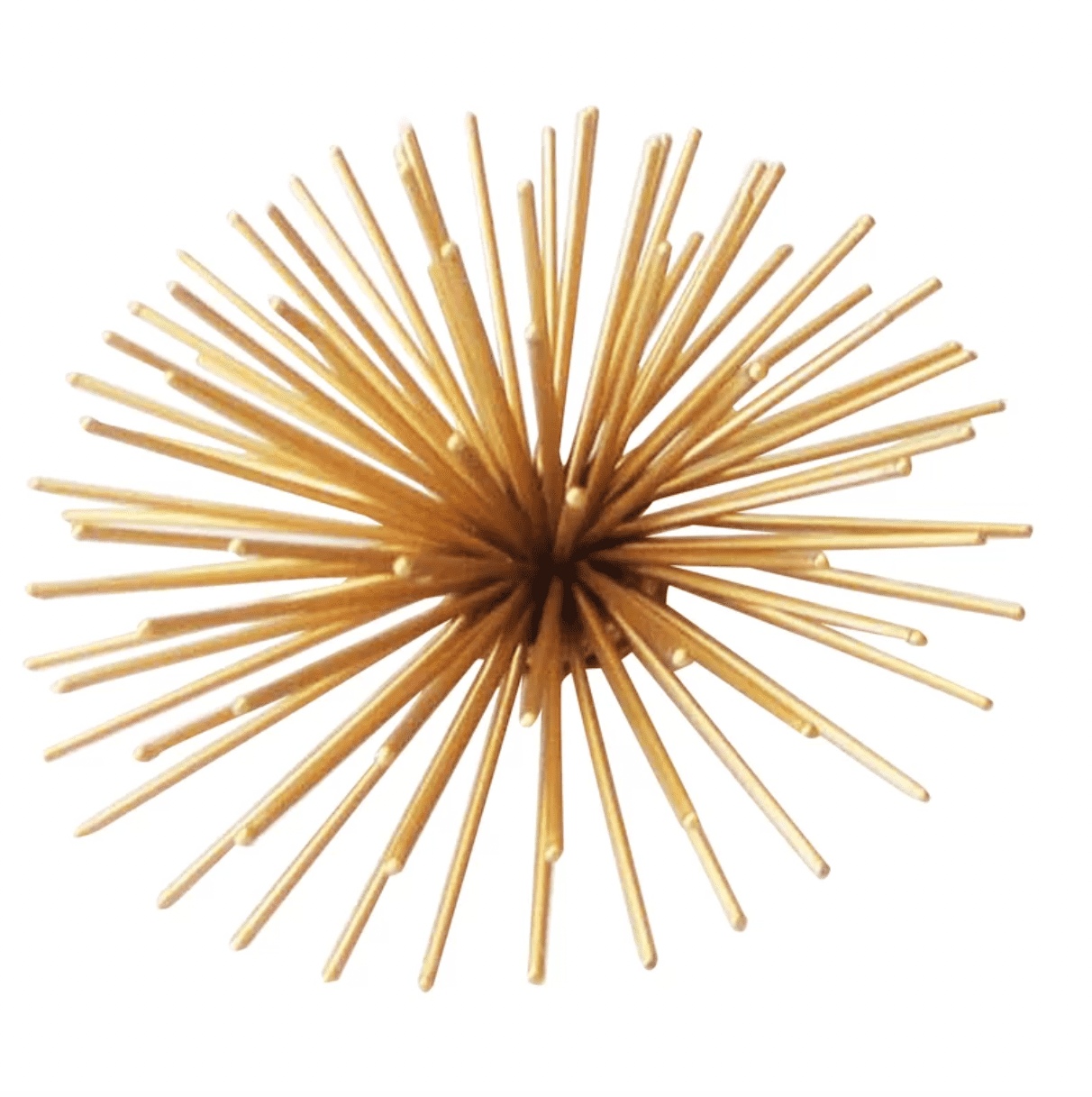 Sputnik didn't just inspire chandeliers, its look, along with other starburst shapes, was reinterpreted through wall art, textiles, and other decorative objects, too. What's wonderful about a sculptural piece like this is that it adds texture and a flash of metallic in a space that's most likely already full of wood, natural colors, and sleek lines. 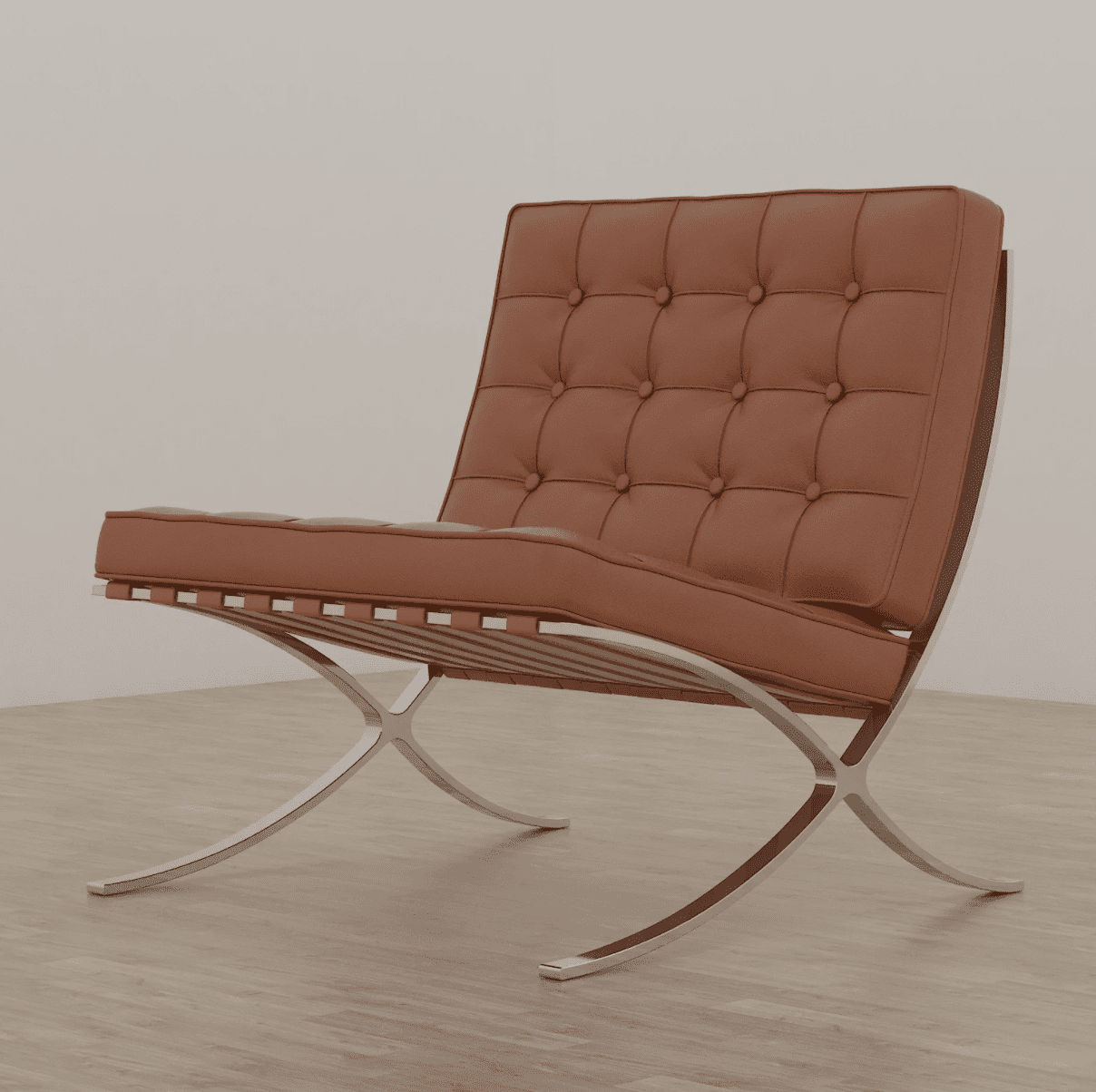 Although it would be pretty cool to own an original Barcelona chair designed by Ludwig Mies van der Rohe and Lilly Reich, it's a quick way to drain a decor and furniture budget. Fortunately, models that look pretty similar to the first authentic design aren't too hard to find. These wide, comfy leather chairs look fresh when styled in the corner of a living room or sitting opposite a mid-century couch. 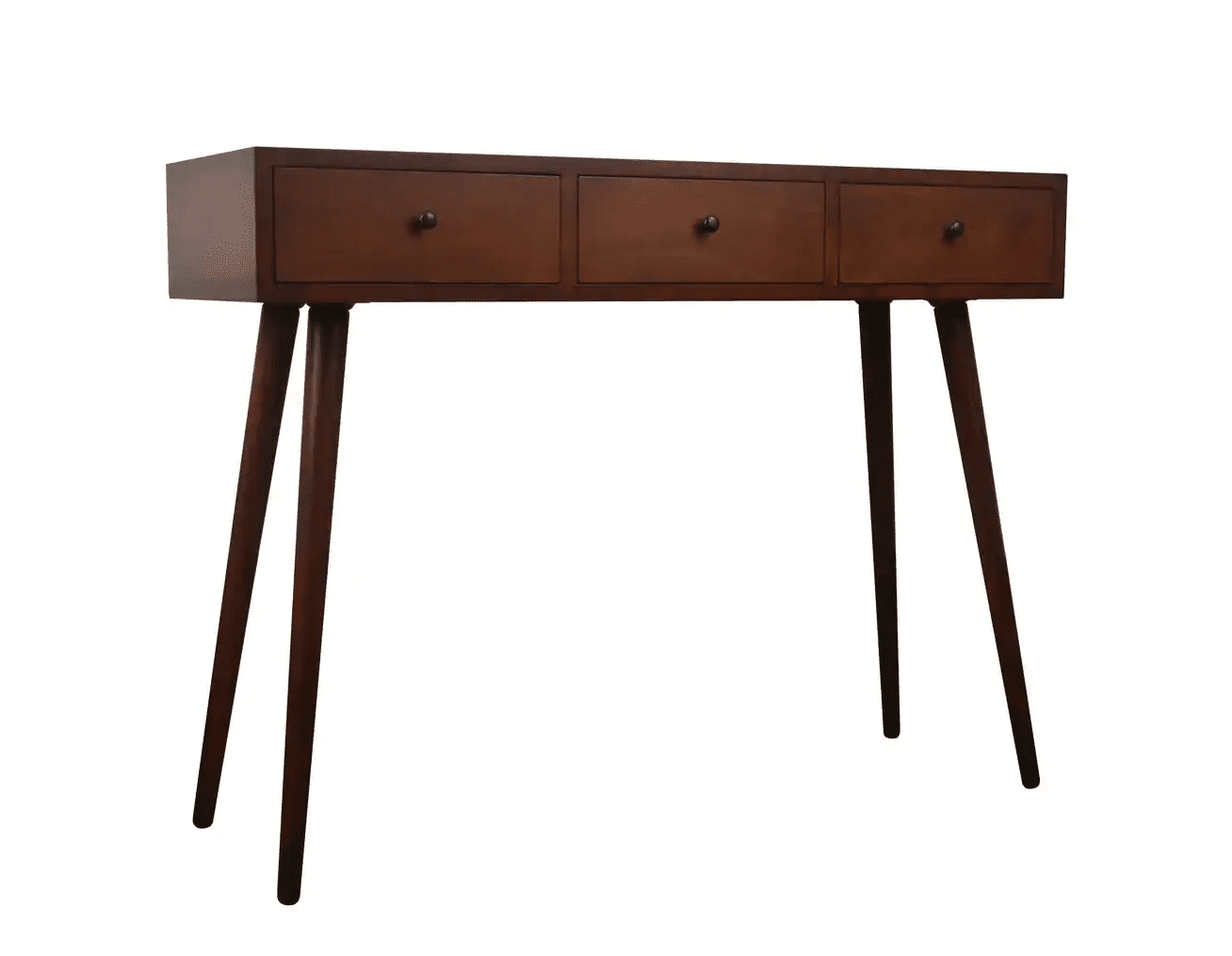 A splash of mid-century can be introduced into your space the second anyone sets foot inside. Console tables are a perfect way to implement the hallmark characteristics of the era in just one piece of furniture. Hang up an asymmetrical mirror above it or decorate the top with a retro vase to jazz up the simple design. 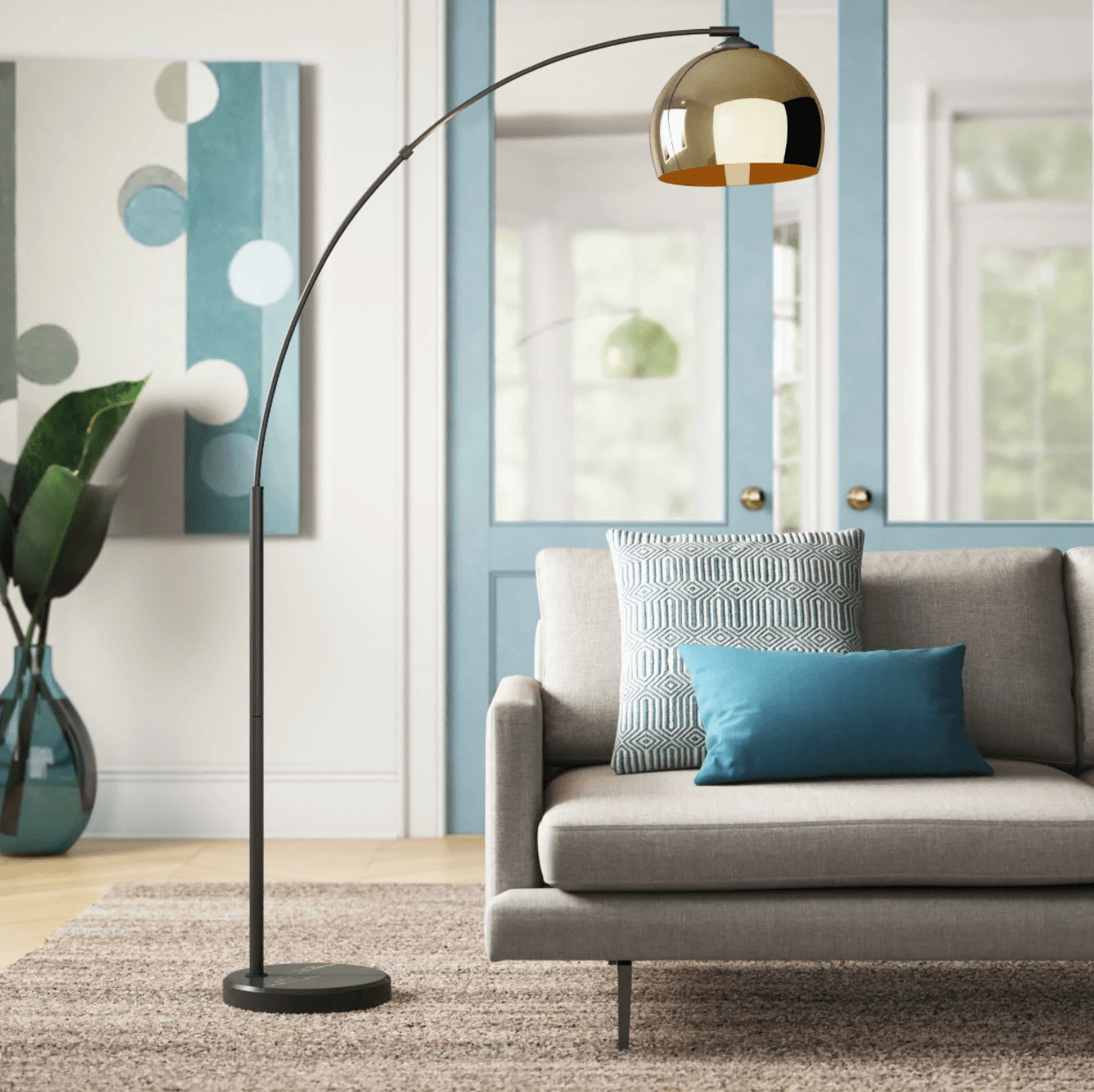 Balanced is a great way to describe mid-century modern homes. The natural and minimal foundational elements are often countered by a few bold bits of color or metallic finishes. This arcing floor lamp brings a nice glint into a subdued space and the rounded shapes nicely balance out any hard lines found in tapered legs or rectangular furniture pieces. 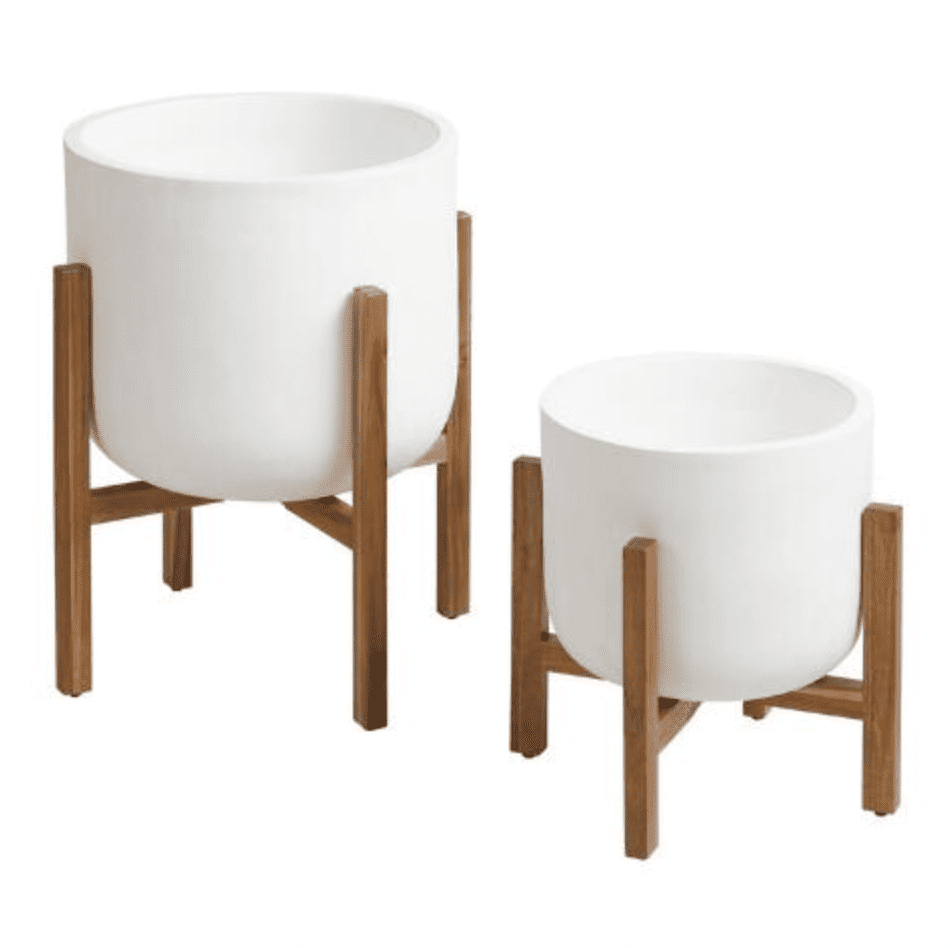 The demand for mid-century modern planters isn't slowing down any time soon. Wooden legs and smooth pots are indicative of what's considered to be an MCM planter. There are plenty of styles that look just like this nowadays, many of which have unique twists, patterns, and colors. These have Spanish flair and could easily fit into homes with a European or Mediterranean design focus as well as mid-century modern spaces. 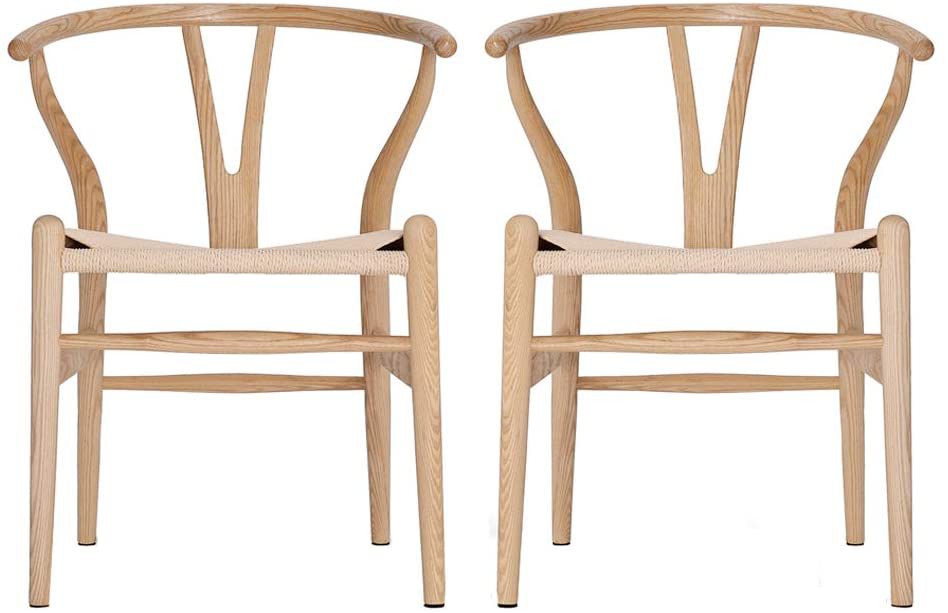 When it comes to fluid design styles that can easily be blended with others, mid-century modern often appears at the top of the list. The shapes, materials, and colors that are typically staples in this design style are fantastic candidates for mixing in with rooms decorated in a different manner. These chairs (which resemble Hans J. Wegner's iconic wishbone chair) would also work beautifully in contemporary, Scandinavian-inspired, modern farmhouse, and coastal-style homes. 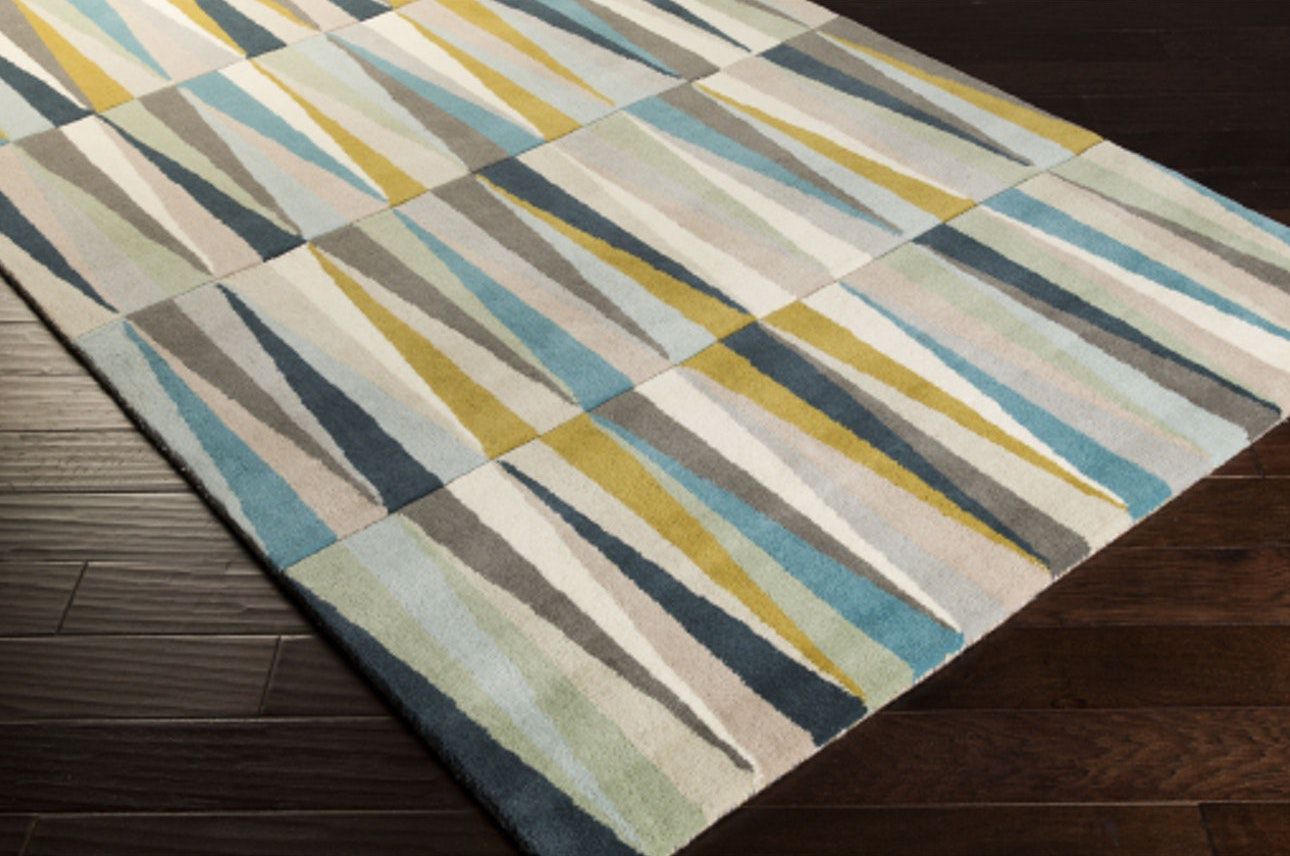 Teal, chartreuse, orange, and olive are just a handful of colors that often showed up as accents if not primary hues in mid-century modern homes. When blending several of these together, they work as a complementary palette and work well in rug form. The sharp triangular pattern in this version makes it feel even more modish, and because it's on the floor, it won't feel too noisy or overwhelm the room. 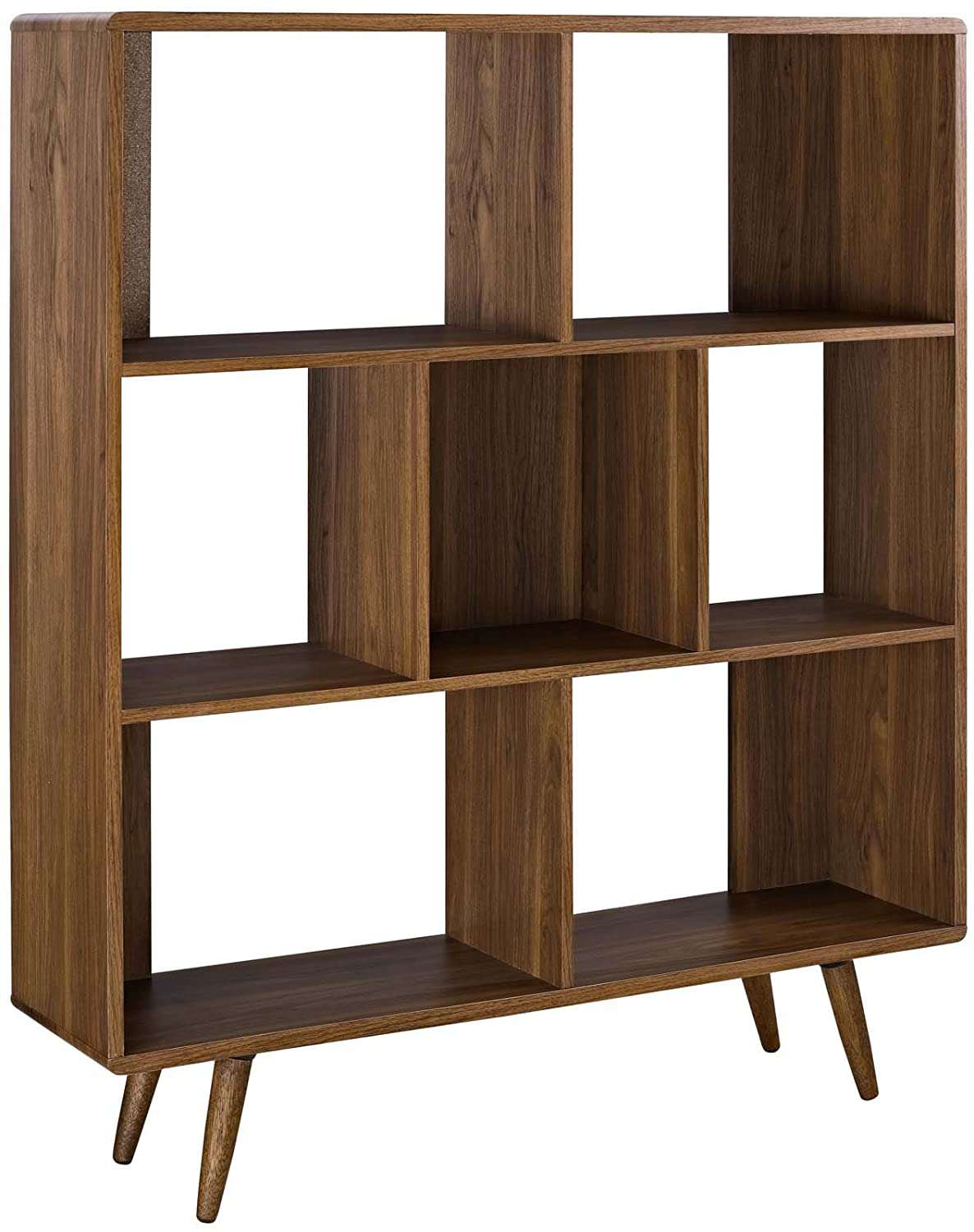 Display your best mid-century modern decorative objects and all your favorite books on the shelves of this wooden unit. The angled legs and square frame completely capture the era and it's a fitting piece in offices, living rooms, and bedrooms. A retro record player could easily be stored here, too. 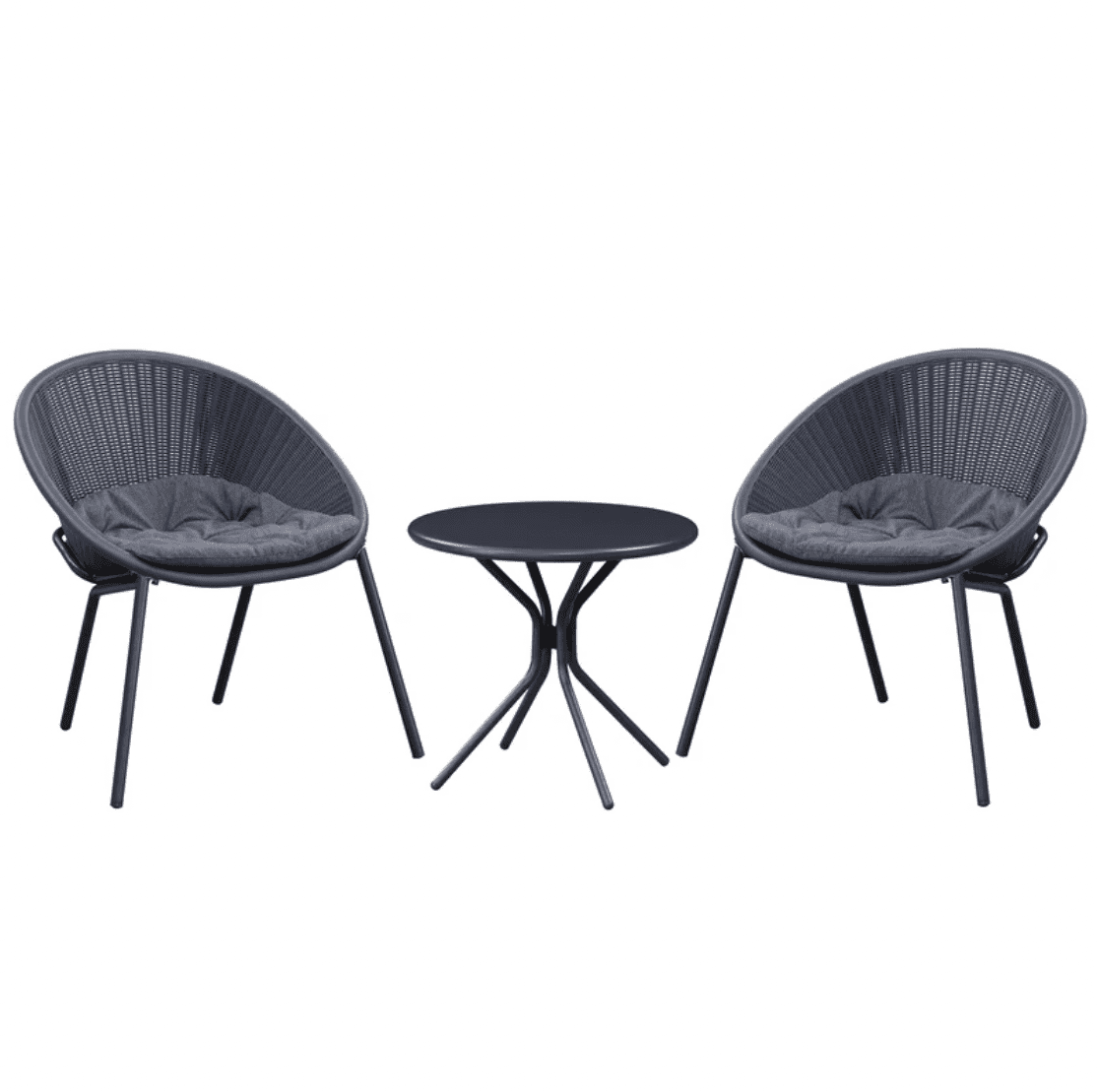 Infusing your home with mid-century modern-inspired pieces shouldn't stop indoors. Fully embrace the look on your patio, deck, or front porch with a bistro set that looks as if it's pulled from one of the MCM style capitols—Palm Springs. The gray color makes it timeless, but the saucer shape of the chairs is a tribute to the era. This three-piece option is rust-resistant and the cushioned seats make lounging much comfier. 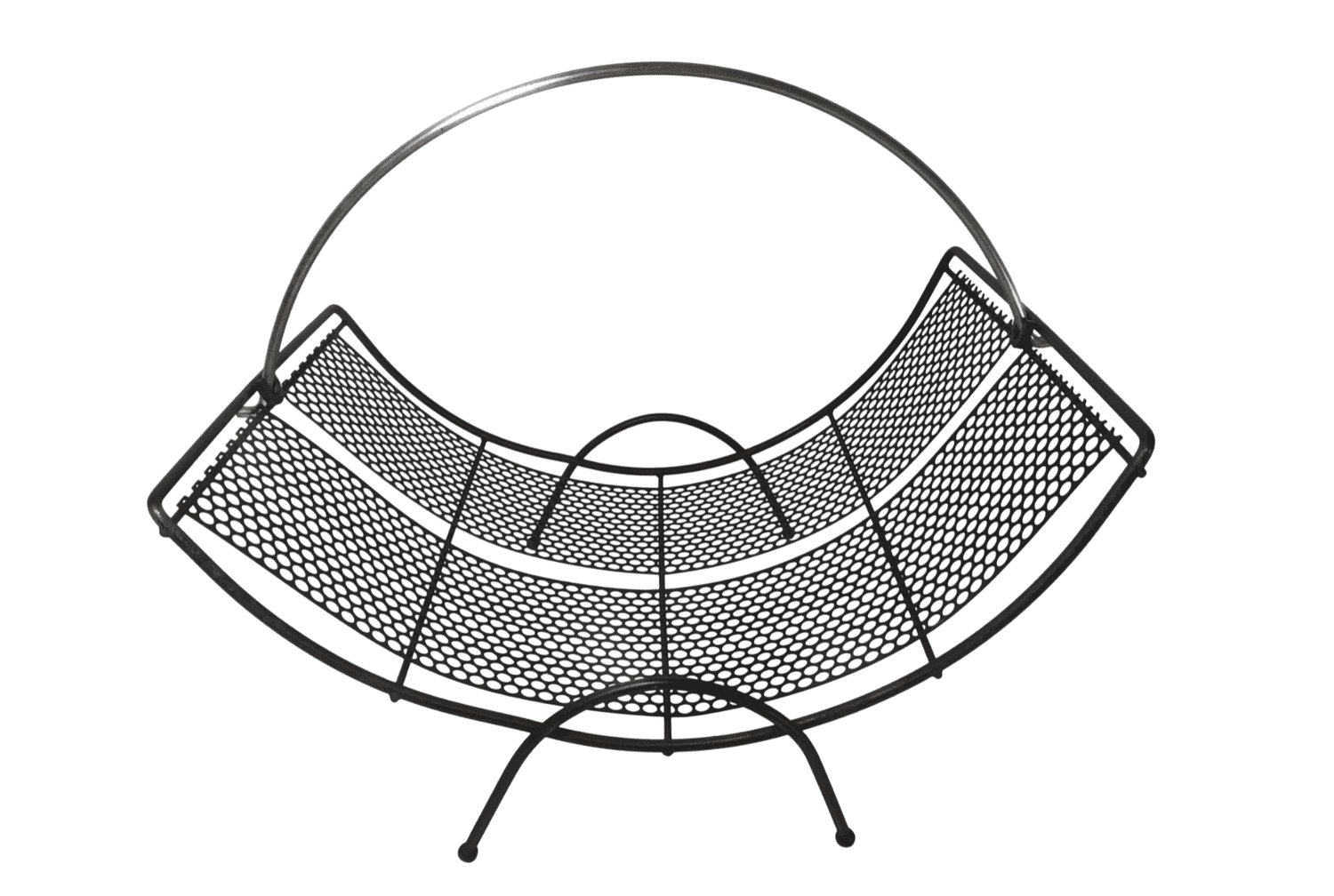 If most of your home is filled with boxy furniture or items with angular edges, this sleek but rounded magazine rack is a perfect accent to break up the scene. Even if it's not filled with magazines or books, it's a great spot for a throw blanket as well.

The Home Depot Mid-Century Modern 23.5 in. Silver Round End Table 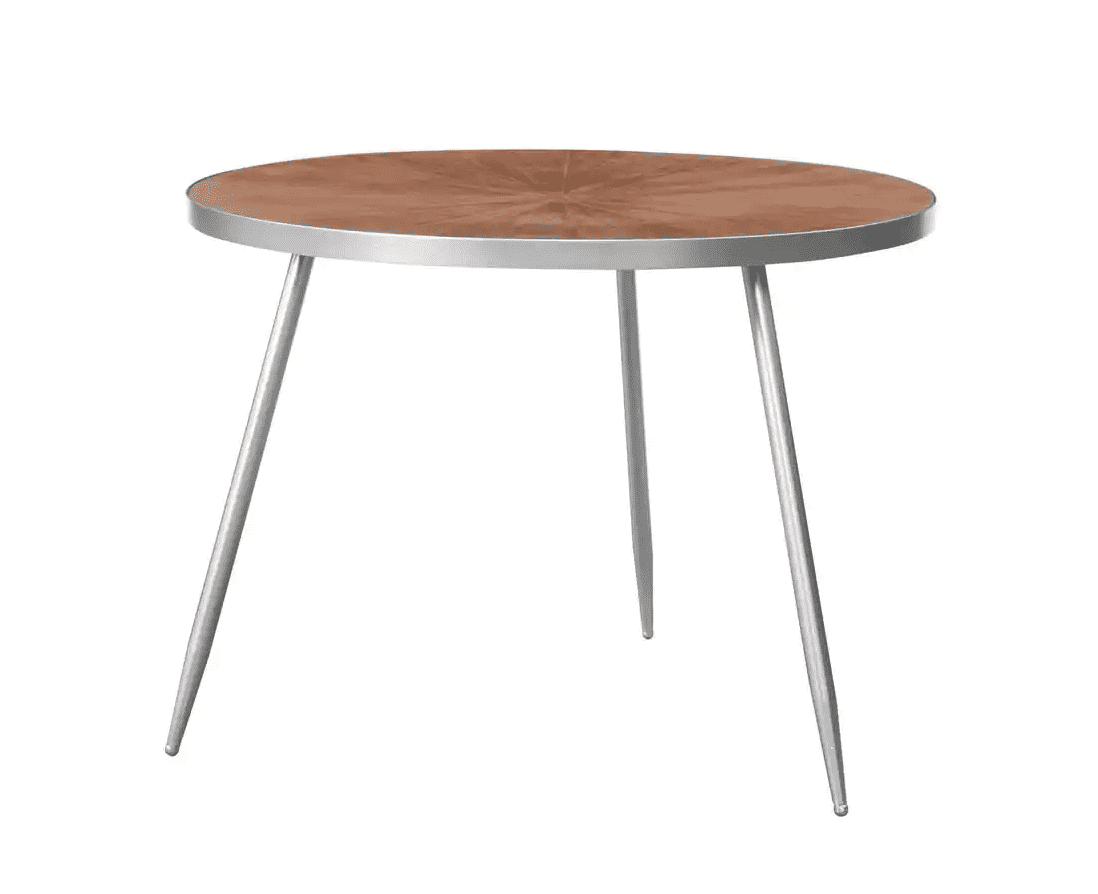 The silver and wood finishes on this end table are particularly telling of what was popular during the mid-century modern boom. The Space Age began in the middle of this era, and it's understandable that metallic sheens, satellite-inspired shapes, and futuristic silhouettes all began popping up in homes. This table is a great balance of these features and feels more grounded thanks to the wood top. 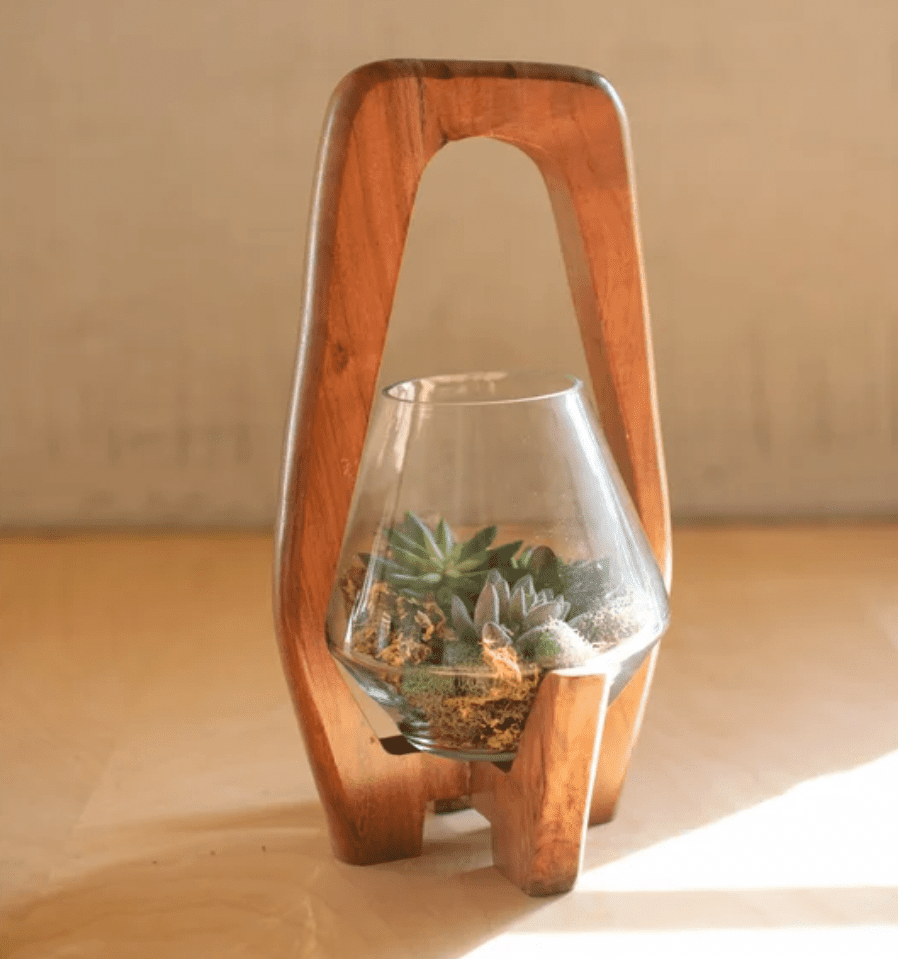 Whether this vase is used for a candle or plants, the geometric dimensions and blend of wood and glass make it a fun pop of mid-century modern style that can easily be added to any room. The holder comes in two sizes, meaning they're fantastic for creating vignettes on tables, bookshelves, and in empty corners.