What to Know About Chinoiserie 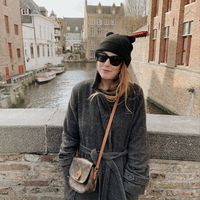 Kaitlyn McInnis
Kaitlyn McInnis is a lifestyle expert and writer specializing in global interior design trends and styles which she is able to experience first-hand through her extensive travels. Her work has appeared in Travel + Leisure, Forbes, Homes & Gardens, and Real Homes. Kaitlyn also worked for AskMen.com, where she managed an international team of writers and experts.
Learn more about The Spruce's Editorial Process

The term “Chinoiserie,” which comes from the French word Chinois (Chinese), is a mostly a European and American misrepresentation of various Asian countries's cultures, histories, and lives that have been overgeneralized and grouped together under one umbrella term. It's not like the French drain or German chocolate cake, which are items named after their creator's country of origin. Chinoiserie is named for the country being appropriated by Europe and the United States.

“Chinoiserie isn't really the purview of Sinologists. It was and remains identified as a non-Chinese take on Chinese decorative motifs and materials, specifically made to appeal to a non-Chinese audience,” explains Kim Dramer, author and specialist in Chinese archaeology.

“It brings to mind richly decorated walls and furniture featuring Orientalizing motifs, and novel materials: lacquer, porcelain, jade and silk, among others. Chinoiserie can be viewed as a sort of reinvention of these materials in new forms for new markets.”

London-based architect Z He grew up seeing the Chinoiserie motif in homes of friends and family in Guangzhou. She notes that although Chinoiserie style did not originate in China, it has still been embraced by the Chinese for its fictional portrayal of Chinese life.

“Because the style is largely fictional, Chinese people were equally captivated by these imaginary landscapes and motifs—a reversal that I find fascinating,” she told The Guardian. “In drawing rooms from Hong Kong to Hampstead, they created a very European version of the East. It bore some relation to reality, but it was very romanticized. It reflected the China they wanted to discover.”

“I think Chinoiserie has always been more or less popular and remains an identifiable and desirable style today,” adds Dramer. “That being said, I think it will regain any popularity it might have lost over the years because it is now easier than ever to add elements of this style to any decor.”

Availability and price of hard and soft products with Chinese motifs is more accessible and affordable than ever. Many chain stores offer, for example, pottery and pillows with these motifs. Some are manufactured here; but others are imported directly from China.

There's also a new appreciation for more natural and basic materials like bamboo, stoneware and rattan with clean lines and minimal surface decoration. “This is different from the old-style Chinoiserie that was heavy on expensive silk, lacquer and porcelain, and depended upon a loaded surface decor,” adds Dramer.

Regardless of whether Chinoiserie is using the trendy materials of decades past or the present, the design style exoticizes and fetishizes Chinese and other Asian cultures.

Chinese imports have been popular in America since before the birth of the country, says Dramer. Remember the Boston Tea Party? That tea was imported by the East India Company from China, not India. Further, there were different varieties of loose tea (tea bags were not yet invented) packed in those 240 chests thrown into Boston Harbor. Americans had significant knowledge of tea.

That tea (black and green varieties) was to be served in Chinese export porcelain vessels. This was porcelain manufactured in China for a non-Chinese market. It was not for home consumption in China, says Dramer. This porcelain for export included balustrade sets, coats of arms painted on porcelain, etc., all forms and motifs never found in China.

Problematic? Certainly, there have been examples that are ridiculous. Think about the chinesische kabinette in Schonbrunn palace plastered in blue and white porcelain or the walls of houses of patrician merchants in East Africa . Or, the Chinese House in Sans Souci built by Frederick the Great with its supposed depictions of Chinese people. “Once Meissen porcelain finally succeeded in manufacturing hard-paste porcelain, its depictions of Chinese were quite ridiculous—which we can view as offensive today,” explains Dramer.

“I don't think people use Chinese decor because they are interested in China,” says Dramer. “They use it because it looks exotic and/or beautiful. I also don't think they need to be familiar with Chinese culture to enjoy Chinoiserie.”

“The only aspect of Chinoiserie that I find offensive is the use of the Buddha as a decorative motif. Common sense and respect would let you know that it's not appropriate to put a Buddha in your bathroom with a battery-operated votive candle,” adds Dramer. “Also those grotesque fake Confucius sayings really upset me. Let's just say that they are very inventive—and often not in a good sense.”

Finally, Dramer suggests avoiding jade, porcelain, and other sought-after materials that are valued in Chinese culture. These materials currently in the West are being bought by the Chinese in the international auction houses. “These objects were often looted by Europeans or Americans,” says Dramer. “It is considered a patriotic act to purchase them for return to China. This Qing (Ching) vase is, perhaps, the best known example.”