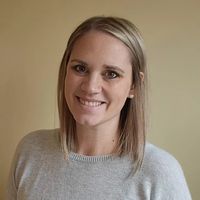 Ashley Ziegler
Ashley has been writing for The Spruce since January 2020. Her several years of experience has included contributions to Romper, Femestella.com, InspireMore, Moms.com, Introvert Dear, This Is My Brave, as well as various other publications.
Learn more about The Spruce's Editorial Process

All Free Clear is a liquid laundry detergent that is free of fragrance, dyes, and harsh chemicals, which makes it a great formula for sensitive skin but not ideal for those who prefer their laundry to smell fragrantly fresh or feel soft and fluffy.

View On Amazon View On Home Depot View On Walmart
4.9

We purchased the All Free Clear Liquid Laundry Detergent so our writer could put it to the test. Keep reading for our full product review.

If you have sensitive skin, it can be tough to find a laundry detergent that is safe for you and cleans well. All Free Clear is a liquid detergent that is free of harsh chemicals, fragrances, and dyes. However, since it’s made from such a basic, stripped-down formula, it lacks the performance most consumers crave with their detergents. Read on to learn more about the cleaning performance, how this liquid detergent affects clothing texture, price, and more.

Ease of Use: Mostly Mess-Free

Typically, we use laundry detergent pods because they’re quick to grab, easy toss into the washing machine, and aren’t messy. Liquid detergents get a bad rap because they leak and spill and get sticky. We currently have a 9-month-old and even switched from her (dreamy-smelling) Dreft detergent to the family’s standard pods because the Dreft bottle feels sticky and was constantly coated with spillover detergent. So, we were prepared for the same experience with the All Free Clear detergent.

It came in a standard bottle with a handle and a cap that is used for a measuring cup. When it arrived, everything was packaged well, and there were no leaks. The cap came off easily, the bottle was large enough to hold a good amount of detergent but not so big that it was uncomfortable or hard to pour some detergent into the cap. After tossing the detergent into the washing machine, we put the cap back on the bottle and didn’t experience any spillover onto the bottle or my hands.

The lid/measuring cup is a smaller and taller design than most detergents (like Dreft) so maybe that’s why we didn’t experience any spillover. We used this detergent for a few rounds of laundry and the only time we really noticed a mess/spill was during a sudden lapse of not paying attention.

We did a few loads of laundry with this detergent, and overall, it did its job. Everything that just needed a basic clean went in dirty and came out clean (which is the main thing you can ask of a detergent). One time, we didn’t realize my husband’s shirt had a small reddish-orange spot on it so we didn’t pretreat it, but we noticed it as soon as it came out of the dryer because the spot was there clear as day. I’m not sure what the origin of the stain was so it’s tough to say if any other detergent would have removed it.

We also washed a baby shirt, which we had intentionally stained with marinara sauce. We poured some of the detergent directly on the stain before throwing it in with the rest of the load. There were still remnants of the stain afterward (if you were looking for it, it wasn’t overly obvious if you weren’t specifically examining the area). So, we would say this detergent does well with basic cleaning but not treating stains.

Scent and Texture of Fabrics After Wash: Not ideal

Since this detergent is missing the chemicals that soften and perfume the clothing, the results are rougher and stiffer. When the clothes don't smell clean, they don't feel clean to us. The clothes did not smell like anything, which is better than having a bad odor. After a couple of rounds of using this detergent, we added some scent boosters and dryer sheets, which helped a bit, but defeats the purpose of getting rid of those chemicals. The fresh-smelling and fluffy laundry feel is something you have to sacrifice in a detergent for it to be safe on sensitive skin.

My 3-year-old daughter has eczema, and we usually wash her clothes separately from the rest of the family because her skin can get easily irritated. But, with All Free Clear, we felt totally comfortable tossing her clothes in with ours, and it did not irritate her skin one bit.

Since this detergent is missing the chemicals that soften and perfume the clothing, the results are rougher and stiffer.

Retailing at around $15 for the concentrated formula, it's about 14 cents per load, which is fairly low compared to other detergents marketed as safe for sensitive skin. Many other brands claim to have all or mostly organic ingredients, which may be why their higher prices. Either way, you get some serious bang for your buck with All Free Clear.

Competition: Several major brands compete, but this is the least expensive

Seventh Generation Free & Clear Laundry Detergent: This laundry detergent retails for around $15 for 100 ounces, costing about 23 cents per load. It is marketed similarly to All Free Clear in that it’s designed for sensitive skin. The difference is that it says it’s made from “biobased,” natural ingredients.

Dreft Hypoallergenic Liquid Laundry Detergent (Baby):  If you’re looking for a detergent that has that “new baby” smell, then Dreft stands alone. It’s one of many when it comes to laundry detergents that are formulated for super sensitive skin. Dreft retails for around $10.20 per 50 fl oz bottle, which translates to 32 cents per load. It is designed for sensitive skin but isn’t made from “all natural” ingredients. It is formulated to remove some tough stains and has the dreamiest scent ever. It’s pricier than All Free Clear but performs differently.

If you need a laundry detergent that is safe for sensitive skin and you’re on a budget, All Free Clear is your best bet. It delivers clean clothes but lacks scent, heavy-duty stain removers, and fabric softener. This isn’t a high-end detergent, but it's a tough performer. It provides a good wash and delivers on its promise to not irritate skin.

The 10 Best Laundry Detergents of 2023, Tested and Reviewed