Girls Who Build is a series of profiles of women who build...like girls. Yes, that's right. Girls are powerful and so are these women, especially when it comes to creating beautiful and useful pieces from wood, metal, and more. These girls are kicking butt in an historically male-dominated industry, and we cannot get enough! Here we find out how they got started and how you can, too.

We recently connected with woodworker and DIY enthusiast, Anika Gandhi, to discuss how she stumbled into the world of home improvement, why she became a blogger, and how her former professional life in electrical engineering perfectly prepared her to be a woman in a traditionally male-dominated medium.

Anika Gandhi is the creative force behind Anika’s DIY Life, a website that features her woodworking projects and plans. She has built 90 percent of the furniture in her home in Orange County, CA. You can also find Anika on Instagram.

Growing up in Bangalore and Delhi, India, Anika didn’t have much access to DIY projects, but she was always very crafty—often drawn to things like painting and embroidery. But that all changed once Anika was living in Northern California with an 18-month-old who needed a workspace of her own.

Anika first moved to the US in 2002 to pursue a graduate degree in electrical engineering. Nine years later, while on the hunt for a fun piece of kid’s furniture that wasn’t plain white or primary colors, she found the online world of IKEA hacks. She jumped into the rabbit hole, and soon found furniture plans to build a small table and chairs. Thanks to influencers like Ana White and Jen Woodhouse, Anika realized, “This looks like something I can do and I’m going to try it.”

After building the pint-sized set, she was hooked. “It was so fun. Just the feeling of building it and taking the boards and transforming it into something... was amazing.”

From Only Owning a Power Drill to Building Her First Workbench

Prior to her decision to build the table, Anika and her husband only owned a power drill. But once she decided that this was her new hobby, she bought a pocket hole jig—a small tool to help her more efficiently join pieces of wood together. Then, after begging the team at Home Depot to cut all of the boards for her first few projects, she realized she needed a saw, too.

“I was like, you know what, I can build so many things. But I really need a miter saw.”

Her husband agreed, but he was concerned about where, exactly, she would use the saw. To assure him she wouldn’t turn the floor of the garage into her workshop, Anika bought herself some 2x4s and fashioned them into a workbench. Her husband gave her the saw for her birthday that year.

As Anika continued to explore what she could build, she was repeatedly inspired by the women she found online. “I was so in awe of all the things that they were sharing and really, in the back of my mind, the first few years that I was building, I was thinking like a blogger.”

Finally, in 2016, as Anika transitioned from working full-time as an electrical engineer to being home with her two children, she decided to start her blog. Today, Anika’s DIY Life has turned into a platform where she inspires others who are like she was in 2011—people who have never touched a power saw.

Since that first table, Anika has furnished almost her entire home with handmade pieces. She ran through a few favorites as we chatted, naming a beveled coffee table as one of the most complicated, and most rewarding.

She also named a media cabinet—her first attempt at creating something large-scale.

“I built [it] when I was pregnant with my son, like six or seven months, and it was my first big build. I call it my middle child. I literally finished it a month before he was born.”

Sharing the Small Details and Mistakes

But, large or small, every single project is a reminder that you need to be precise and careful, and each project holds a lesson. This is a priority for Anika to remember as she shares with her audience—mistakes happen, and especially at the start of the woodworking journey. She stays extremely mindful that beginners need to know every single step required to truly succeed.

“As we keep making more and more things, there are all these little details, the basic steps that become inherent to us that we [forget to] share,” she said. “When you’re starting out, some things are hard because no one has told you those things yet! So I try to show people all those nuances.”

Because her blog caters to beginners, she’s also passionate about only showing simple projects that require simple power tools. But no matter how simple a project may be, there is always room for error.

“Every project has something that doesn’t work out and you have to just figure it out. Most recently, I’m building these floating shelves for my kitchen. Last week, I was trying to cut these boards but my table saw kept going out of alignment. I couldn’t figure out why things weren’t working out but now I know every time I change something I really, really have to check and double-check.”

As someone who didn’t discover her love of building until adulthood, the people in Anika’s life are particularly impressed by her growth. And not only as a woodworker but also as one who shares her process with the world. When her parents visit, in particular, they’re impressed that their crafty kid has grown up to furnish her entire home.

Her own children are following in her footsteps, too. “My son is a daredevil… he wants to run the saw. My daughter is more crafty, so she loves painting things.” Anika balances both of their ideas by letting them help, while her husband is happy to let all three take the reins. “We just changed the floors in our kitchen and that was the first time he actually touched a miter saw… and I had to show him how to use it,” she laughed.

As she continues to fill her home with her DIY pieces, Anika also creates projects that she gives to friends or sells at cost—everything from tables to turntable consoles. But she encourages people to still try on their own, first.

“Just get started. Every project you make, you can get a little more complicated and grow your skills, but just start. Progress is better than perfection.”

As our conversation came to a close, we asked if Anika has ever felt she stood out in the industry as a woman who builds.

“I’ve always been in a male-dominated field. I was an electrical engineer, and then in my work, I was the only woman engineer across the three departments,” she explained. “So I’ve always been in a male-dominated area and I’ve never felt like an imposter. I’ve never felt like, ‘I am here but there’s something I can’t do that these men can do.’ And no one has ever told me that I cannot do something because I am a woman.” 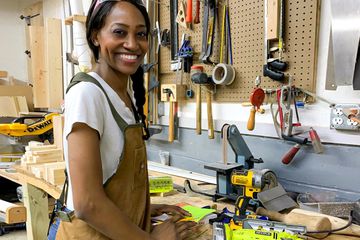