During the May 10 episode of Antiques Roadshow on PBS, the experts met with celebrity chef Carla Hall, famed children’s author Marc Brown, humorist John Hodgman and theater power couple Rubén Blades and Luba Mason. Impressively, each guest had items appraised that were both sentimental and valuable. Let’s recap what was appraised and how much they’re worth.

The Newest Season of Antiques Roadshow Has a Star-Studded Twist

Creator of the hit public television cartoon series, Arthur, Marc Brown has created thousands of illustrations in his 44-year career. Roadshow experts met the beloved children’s author at his Massachusetts home to appraise his artwork and a few pieces from his folk art collection.

A collector as well as an illustrator, Brown owns several American folk art portraits of children. He purchased a Joseph Whiting Stock painting in 1980. It was of a little girl holding a doll, which was done in the late 1840s. Brown paid $6,000 for it and it’s now worth $15,000-$18,000 at retail.

Another special portrait of his could be worth $125,000 if they can prove that it’s by famed husband and wife team Ruth and Samuel Shute. It’s another portrait of a child, and Brown bought it under the assumption that it was in fact a Shute painting. However, the expert couldn’t give it that designation just yet. Brown paid $30,000 for it, and it’s worth $25,000 as it is.

The Roadshow team joined the host of The Chew and her mother in Washington D.C. to appraise several family heirlooms and collectibles.

They were both blown away when they discovered that a high chair that’d been in their family for generations could convert into a stroller. It was made between the 1880s and 1920s in the same time period as their family table. Both pieces were made by the Wolverine Manufacturing Company in Detroit, Michigan and can sell for $100-$400 dollars each.

As a chef, Hall collects items that she can use in her kitchen. She appraised her grandmother’s ice cream scoop, valued at $15-$30, and a trio of turquoise soda fountain bottles valued at $40-$120 each.

Also belonging to her grandmother, were three handbags that Hall had stored in her closet. The first bag appraised was an alligator-skin bag from the 1940s, made in Havana Cuba. The purse features the head and legs of the gator and is monogrammed “FMG” after her grandmother Freddie Mae Glover. It’s valued at $150-$200.

Another monogrammed purse was a first of its kind for the appraiser. It was made by Patricia of Miami in the 1950s and featured a large pearl “F” and gold bugle beads on the front. It’s valued at $150-$200.

The last was a cream and grey lizard bag with black suede made by Sydney California in the late 1950s. To Hall’s surprise, it’s now worth $300-$350.

The experts joined Hodgman in Maine to look at some of his treasure. An author and correspondent on The Daily Show, Hodgman loves writing. He describes his “collections” as tiny hoards of shiny things that catch his eye.

His love of collecting vintage Little Blue Books began when his mom sent him a copy of How to Prepare Manuscripts. He didn’t spend much on them, he said, but today his collection is with about $60. And, as more famous people take interest in the books, their value will increase, the expert said.

Hodgman also had a cash register he found in an antique store appraised. It’s believed to be the same cash register that was featured in a children’s book One Morning in Maine by Robert McCloskey, but it hasn’t been confirmed. He paid $900 for it, and it could sell for three times that if it’s proven to be the same register from the book.

Last but not least is Hodgman’s Alice and Martin Provensen illustration from The Animal Fair done in 1973. He paid $8,000 for it, and it can be insured for that amount.

Acclaimed musicians and actors, Blades and Mason had several pieces of art appraised at their home in Chelsea, New York.

The first piece appraised was a lithograph of the play How To Succeed In Business Without Really Trying by American caricaturist Al Hirschfeld. Mason is featured in the drawing, with Hirschfeld’s daughter Nina’s name inconspicuously written in her hair. She paid $1,200-$1,300 for it and can be insured for $2,000.

The second piece appraised was a Hirschfeld original of The Cape Man that Mason bought as a gift to Blades. It was Blades’ only Broadway play, and he met Mason there. She paid $3,000-$5,000 for it, and it can be insured for $10,000.

There were some shockers in this week’s episode of Antiques Roadshow, which proves that celebrities are a lot like regular people. We all accumulate items that have sentimental value to us, and sometimes we’re shocked when we find out just how much they’re worth. Stay tuned for new episodes airing May 17 and 24 on PBS.

8 Ways to Decorate with Antiques 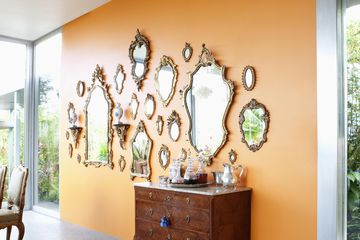