For most people, the most exciting thing we’ve taken home from work is a pen. But that’s not the case for guests on the May 17th episode of Antiques Roadshow, which is featuring celebrities getting items appraised for the first time in its 25 seasons.

Roadshow experts met up with actor Ronny Chieng, cartoonist Mo Willems, journalist Soledad O’Brien and fashion designer Christian Siriano to appraise some of their most beloved possessions, including mementos from their careers. Let’s recap the show and some of the most interesting items appraised.

The experts met with the Crazy Rich Asians actor in his New York City home to look at some items from his time on set, pieces from his watch collection, and a unique find at a garage sale.

First was a copy of the script for Crazy Rich Asians. It includes lots of notes, annotations and highlights by Chieng. It has a lot of personal significance to him, but the movie’s success places the script’s value at $1,500.

He also showed a piece of sheet music that was recorded for the film. On a trip to Los Angeles, Chieng got to see the recording for his character Cousin Eddie’s theme music. He got a copy of the sheet music signed by conductor Brian Tyler, and it’s valued at $750.

Chieng was pretty shocked to see how much his film memorabilia was worth and had a few other personal items appraised, including three watches. The first was a vintage Seiko, believed to be worn by Bruce Lee. Chieng paid $1,400 for it. The expert said it probably wasn’t worn by Lee and is worth about $1,500. The second watch was an Omega given to him by his father. He had it fixed for about $100 and it’s worth $500 today. The last watch was a Rolex that his father paid about $1,000 for and is worth about $5,000 today.

Last, he had a copy of the complete collection of Shakespeare's work that he bought at a garage sale in Australia. It was printed in 1935 by Oxford University Press and formerly owned by the first female aeronautical engineer at the University at Sydney. He paid $10 for it, and it’s worth that much today.

Inspired by the funnies in the newspaper, Willems was a huge fan of Peanuts creator Charles "Sparky" Schulz. When he was young he wanted to be a syndicated cartoonist and wrote a letter to Schulz asking for his job after he died. Willems went on to create the children’s book series Elephant and Piggie and Don't Let the Pigeon Drive the Bus!

In an Altoids mint tin labeled “Sparky’s Nib”, he a pen nib used by Schulz. It was given to him by the Charles M. Schulz Museum after he got close to Schulz’ widow, Jean Schulz. Willem actually used it to illustrate one of his books with it, and it’s valued at $500-$1,000.

“It’s the culmination of almost all of my childhood professional dreams,” Willem said.

He also showed an original Peanuts comic strip that Schulz made in 1954, featuring the character Lucy. It still has the white out marks on it, and Willem said he intends to donate it to the Schulz Museum one day. He covered his ears when the appraiser quoted it being worth $50,000-$75,000.

Willem also had several cartoon books featuring work by other great cartoonists appraised at about $5-$15 online.

The experts met the Matter of Fact host in Dutchess County, New York, where she had several pieces from Africa and the post-Civil War era for them to appraise.

“I don’t collect things because I think they have monetary value,” she said. “They have to spark a little joy in me.”

While shooting in the Congo for PBS, she found a mask by the Kuba tribe and a sculpture by the Bena Lulua people. The expert explained that while the pieces look like they were used in rituals, they were actually created for sale to tourists and are worth about $150-$300 each.

She also showed several controversial Black figures and mechanical banks that she purchased on the street for $5-$9 each. She and a friend bought them because they didn’t want someone else to buy and use them in ways that dishonor their backstory.

They were made after the Civil War by people who were angry about the newly freed Black slaves. The figures depicted demeaning caricatures of Black people and were marketed to children. Today they’ll sell for less than $100 each.

“I like knowing the backstory on it. I think it’s an interesting and sometimes uncomfortable history so I’m glad to know it and at least I can make a thoughtful decision on how we’ll display them somewhere.” O’Brien said.

Siriano grew up in Annapolis, MD, and won Project Runway when he was 21 years old. That launched his career into designing for the stars. He invited Roadshow experts to visit his workshop, The Curated NYC, in Manhattan as well as his Connecticut home to appraise several dresses and pieces of furniture.

Appraisers saw his dress for actor Billy Porter, which he wore at the Oscars in 2019. The gown is made of silk velvet and cost $7,500 to make. The Roadshow expert recommended he insure it for at least $15,000.

Siriano’s yellow gown for Celine Dion cost $20,000 to make and can be insured for at least three times as much, because it was worn by the world-famous singer. It’s also a different style of gown and was labor intensive to make. 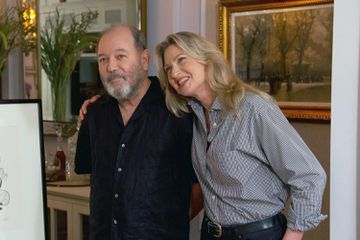