For most bathroom sinks, the drain stopper apparatus is a pop-up assembly that works by means of a small vertical rod attached to a pivot rod below the sink. This lift rod slides up and down through a small hole in the back of the faucet body. The pivot rod moves a linkage inside the drain tailpiece, lifting or lowering the stopper as needed.

Installation of a drain stopper is usually fairly straightforward and simple, but occasionally the process can become a little more complicated due to variations in the fixture or fittings.

Sink stoppers are available in different metal finishes for the visible drain ring and stopper to match whatever faucet hardware you have. The lower drain assembly can be made of durable metal or less expensive plastic. Professional plumbers sometimes feel that metal assemblies are preferable, but plastic pop-up assemblies are generally fine for DIYers, though they can be slightly prone to breakage if you over-tighten the nuts during installation.

In addition to the traditional pop-up stoppers that use a lift rod, pivot rod, and internal ball to lift and lower the stopper, there are now spring-loaded sink stoppers that have none of these pivot parts. These stoppers resemble the type of drain stopper now very popular for bathtubs. These spring-loaded stoppers open and close simply by pushing down on the stopper from inside the sink; one push down causes the stopper to lock in the closed position, the next push releases the stopper and allows the internal spring to push it back up to the open position. These stoppers are worth considering, as they are quite easy to install. They do, however, require the user to reach through standing water to release the stopper and drain the sink.

When professionals are installing a complete bathroom sink and faucet assembly, they often do the work while the vanity top is still removed from the base cabinet. It's much easier to attach the faucet and various drain parts during this time, while you have open access. That's the process shown in the project demonstrated here. However, in many situations you'll be installing the stopper assembly on a sink and countertop that's already in place—usually working from below the sink, inside the vanity cabinet. The process for installing the pop-up stopper assembly is the same, but the work will look a little different and you may find it a little more difficult due to the limited access.

Watch Now: How to Install a Pop-Up Drain Stopper

Learn What to Call the Parts of the Bathroom Sink 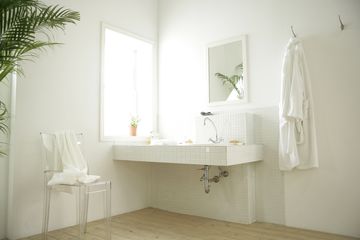