Walls are routinely removed in homes. This is a project that opens up space, provides greater flexibility, and often corrects poor home remodels by previous owners.

This means that, as a do-it-yourselfer, you can remove a non-load-bearing wall with relative ease—once you confirm that it does not bear loads.

Basics of Removing a Non-Load-Bearing Wall

Older houses were segmented into many small rooms to control heating or because milled lumber was incapable of spanning great distances. Today's inexpensive laminated veneer lumber (LVL) had not yet arrived.

Newer, post-World War II houses began to adopt the open floor plan with beams that could span those distances. These houses typically have a single large communal area that includes a kitchen, dining room, family room, and two or three bedrooms.

Why You Have Non-Load-Bearing Walls

Even if the purpose of the wall is not to bear loads, it may exist for other reasons: sound blocking, energy segmentation, privacy considerations. You will often find these types of non-load-bearing walls:

31 Fabulous Feature Walls for Every Room in Your Home 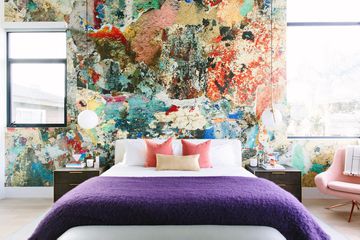 The Secret of Removing a Non-Load-Bearing Wall

Home shows often have hosts and homeowners bashing walls with sledgehammers. Instead of that, your approach to removing a non-load-bearing wall will be more surgical. Bashing down a wall with extreme force is needlessly messy and dangerous. In fact, this approach may not even work.

Removing a non-load-bearing wall can be dangerous in many respects. First, the process of removing the non-load-bearing wall touches on many hazardous elements and activities: live wires, sharp metal (even glass and razor blades), vermin, heavy items falling on you, and other types of injuries. For this, always be fully suited up with safety gear. Second, if you mistakenly remove a load-bearing wall, you risk severe damage to your home that can be extremely costly to fix.

Watch Now: How to Tell If a Wall Is Load-Bearing

When to Call a Professional

Determining whether an interior wall is bearing or not bearing loads can be a tricky business. You can get the opinion of a contractor or structural engineer who will charge you an hourly or flat fee to check out the wall.