The Best Band Saws for Any Home Improvement Project

Michelle Ullman
Michelle Ullman is a home decor expert and product reviewer for home and garden products. She’s currently the commerce editor for home improvement and tools on The Spruce. She has been writing about home decor for over 10 years for publications like BobVila.com and Better Homes & Gardens, among others.
Learn more about The Spruce's Editorial Process
Reviewed by
Deane Biermeier

A band saw is a power saw with a long, sharp-toothed blade that offers excellent control for cutting wood, metal, and other commonly-used building materials. We researched dozens of band saws from the best tool brands, evaluating ease of use, accuracy, safety features, and overall value.

Our best overall pick is the JET JWBS-14DXPRO 14" Deluxe Pro Band Saw, which stands out for its powerful and smooth performance, durable construction, and customizable sawing.

Here are the best band saws.

View On Amazon View On Home Depot View On Toolnut.com
What We Like
What We Don't Like

What do buyers say? 92% of 100+ Amazon reviewers rated this product 4 stars or above.

The JET JWBS-14DXPRO band saw is a high-end professional-style machine for cutting wood, metal, and much more. It sports a two-speed poly-v belt drive system to cut at 1,500 or 3,000 surface feet per minute (sfpm). This two-tier speed function allows for extra precision when you’re making your cuts, allowing you to customize your approach based on your materials and project. The saw can slice into material as wide as 13.5 inches and as high as 12 inches.

This floor-standing band saw has a 15-inch by 15-inch sturdy and stable cutting surface that can tilt 10 degrees left and 45 degrees right, letting you tailor the tool to your needs, particularly when making delicate cuts. It has a resawing function and a full cast iron frame. This machine also has ball bearing guides, an adjustable table angle and numerous safety features, such as a blade tracking window. It even has a storage shelf enclosed in the base. This is a great band saw that can do just about anything, but it is designed more for experienced and professional users, and is priced accordingly. 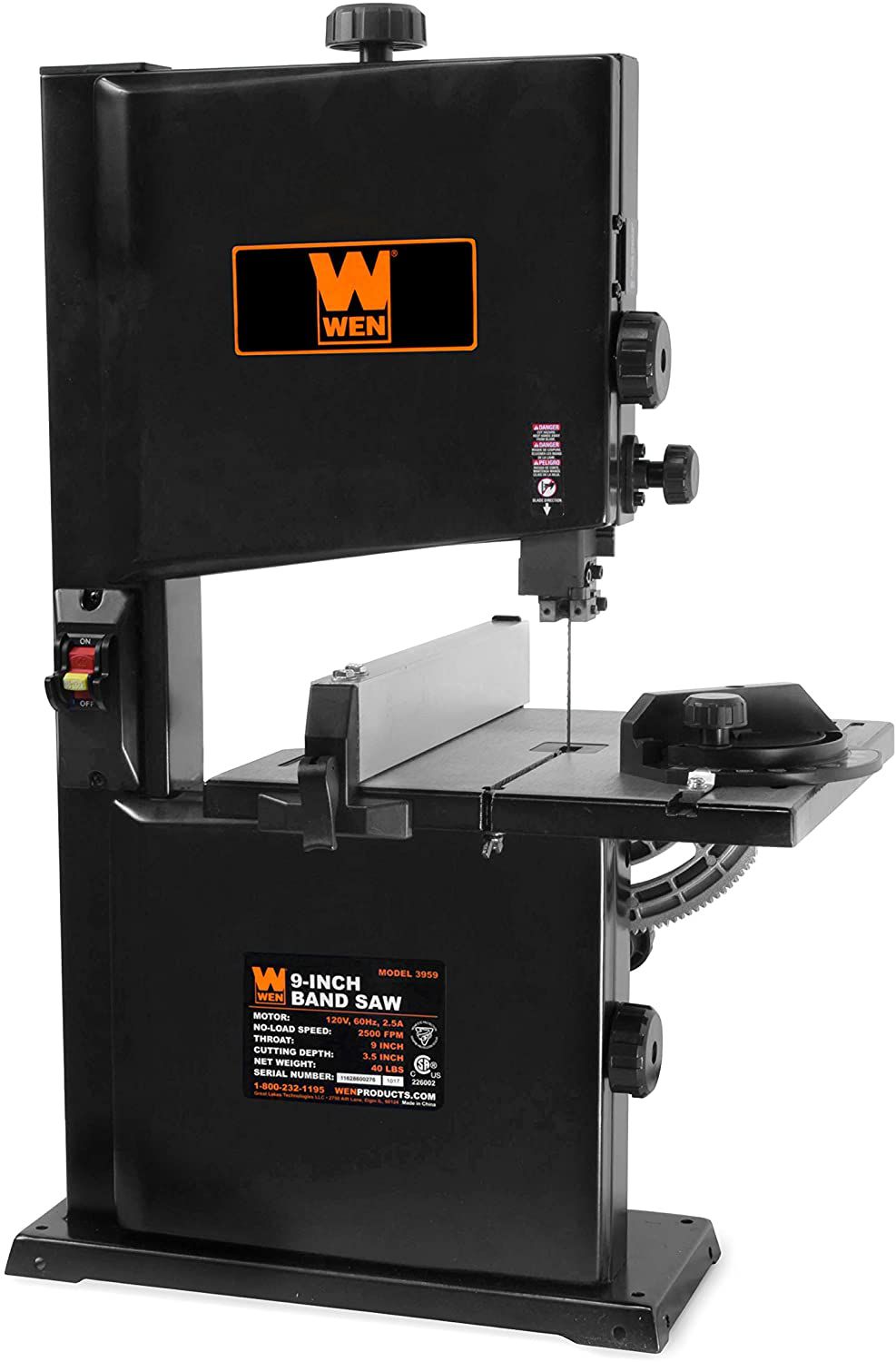 Not everyone needs a large band saw for cutting through wide or long boards and other materials. If you mostly work with smaller boards, or only expect to use your band saw on occasion, a more compact machine that’s still powerful enough to get the job done, yet won’t hog up too much space in your workshop or garage is all you need. And the WEN 3959 9-Inch Band Saw fills that need perfectly.

The band saw comes with a ¼-inch blade, a 2.5-inch dust port, a miter gauge for setting boards at precise angles, and a rip fence to keep your cuts straight. 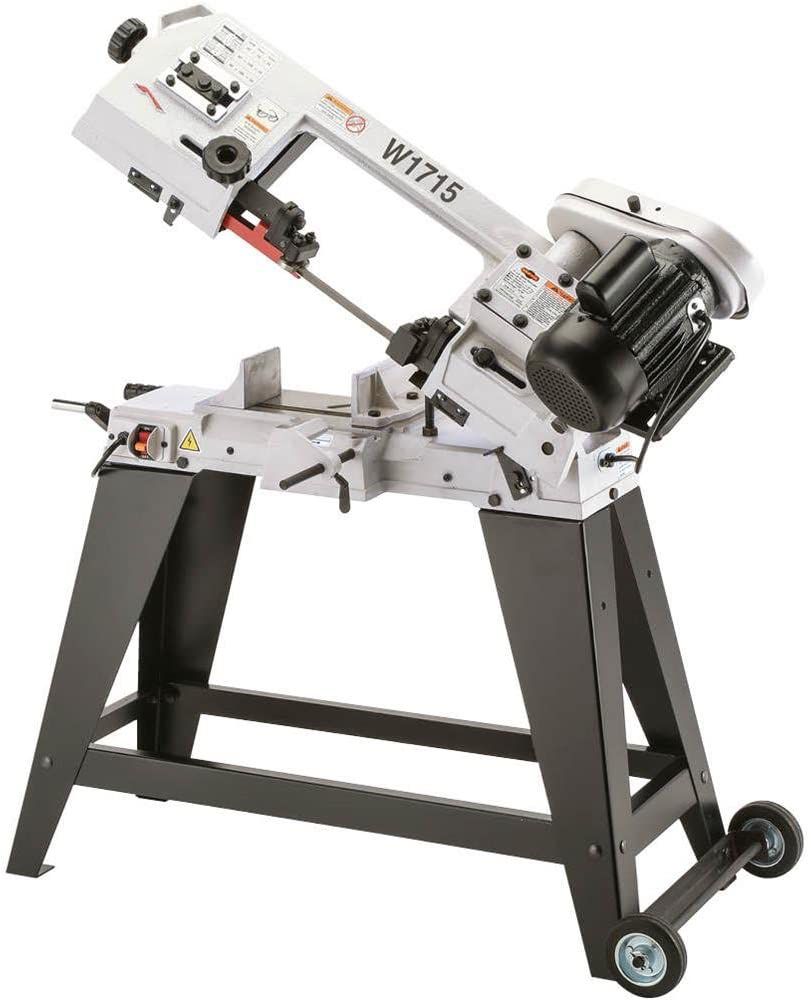 Buying a great metal-cutting band saw can be a little more difficult than finding a reliable, affordable woodworking band saw. However, the Shop Fox W1715 Metal-Cutting Bandsaw is an excellent option that works well on everything from steel and aluminum to copper or brass, as well as wood and plastics.

This Shop Fox band saw comes on its own wheeled stand, so you can easily move it right where you want it. The blade easily adjusts for either horizontal or vertical cutting, allowing you to tackle more complicated designs or cuts. The saw has three speeds— 78-, 108- and 180- feet per minute—for a range of options when you’re slicing through metal. Additionally, the band saw allows for cuts anywhere from 0 to 60 degrees and has a beveling vice for a sturdy grip. With this Fox Shop band saw, you get ball bearing blade guides, onboard blade tension and tilt knobs, automatic safety shut-off features, and a feed rate adjustment handle. The saw is powered by a ¾-horsepower motor and features a two-year warranty. 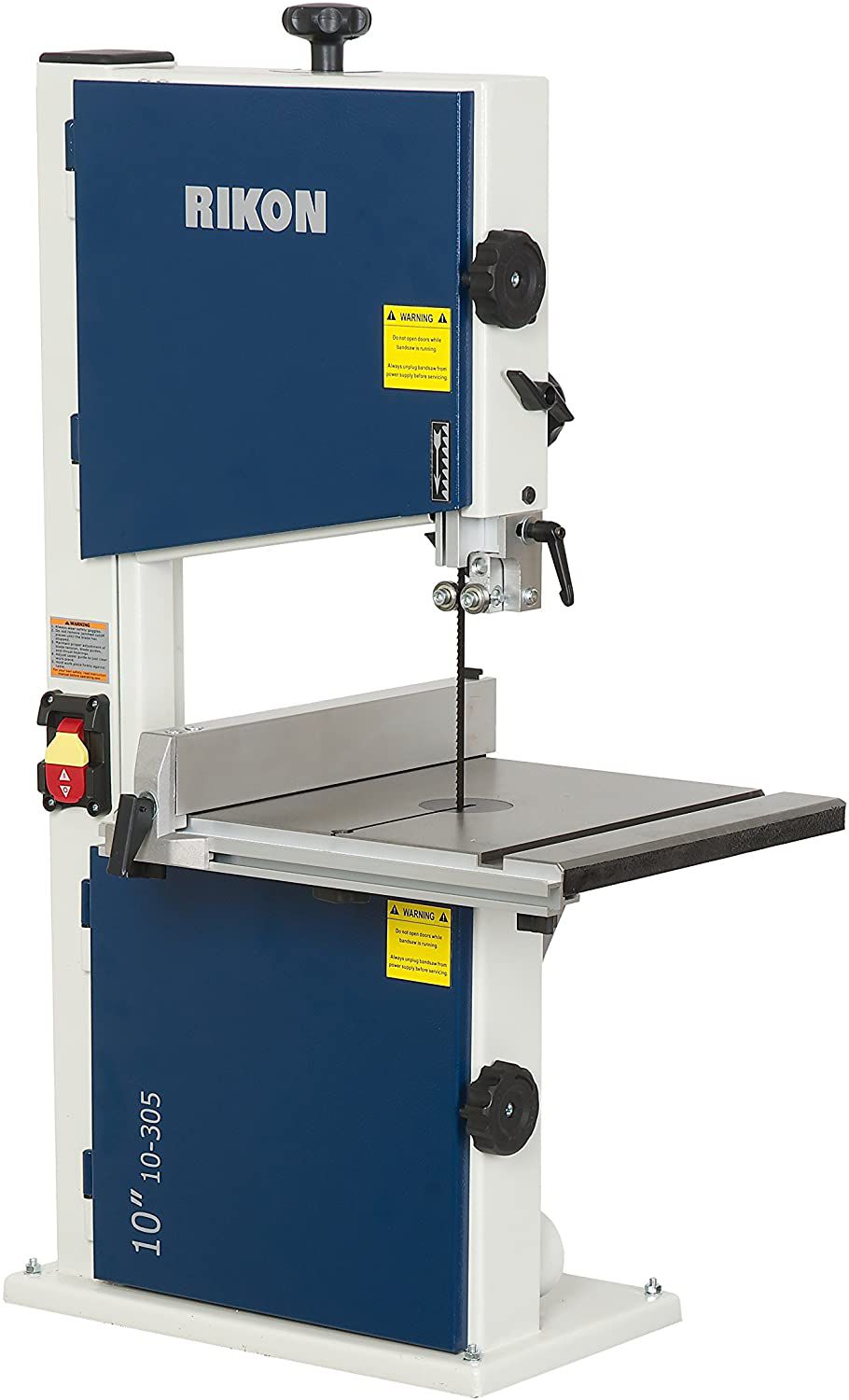 Resawing refers to the process of cutting a piece of wood into multiple pieces rather than planing, which is removing a strip of wood along the surface. For example, you could turn a 1-inch thick board into multiple ⅛-inch-thick veneers or two 3/8-inch boards. It allows you to get more out of a piece of wood and create a pieces of furniture with mirror grain designs. To make the job of resawing easier you’ll want a ½-inch wide blade with 3 teeth per inch. This allows for a smooth and precise cut that’s still strong enough to get into the grain.

Pair this ½-inch blade with the Rikon 10-305 Band Saw for optimal resawing every time. This reliable benchtop band saw features a large 13-¾-inch by 12-½-inch cast iron table—larger than many competitors and ideal for woodworking projects. The 1/3-horsepower motor gives you plenty of power while the guide post is easy to maneuver with handle. Additionally, the rip fence can be moved or removed for optimal range. The Rikon band saw also has a steel construction and a 2-½-inch dust port.

The Rikon 10-305 can fit ½-inch to ⅛-inch blades. It is a great option for all types of woodworking, and particularly good for resawing.

“While many people consider the tools and environment when thinking about safety measures, they often forget that they themselves can also pose a safety hazard. When working with power tools that can latch on to things—anything that spins or turns falls into this category—it's important to wear clothing that isn't too loose. This also means removing any dangling jewelry like necklaces and bracelets.” Andrew Wilson, home improvement contractor and founder of  Contractor Adviserly. 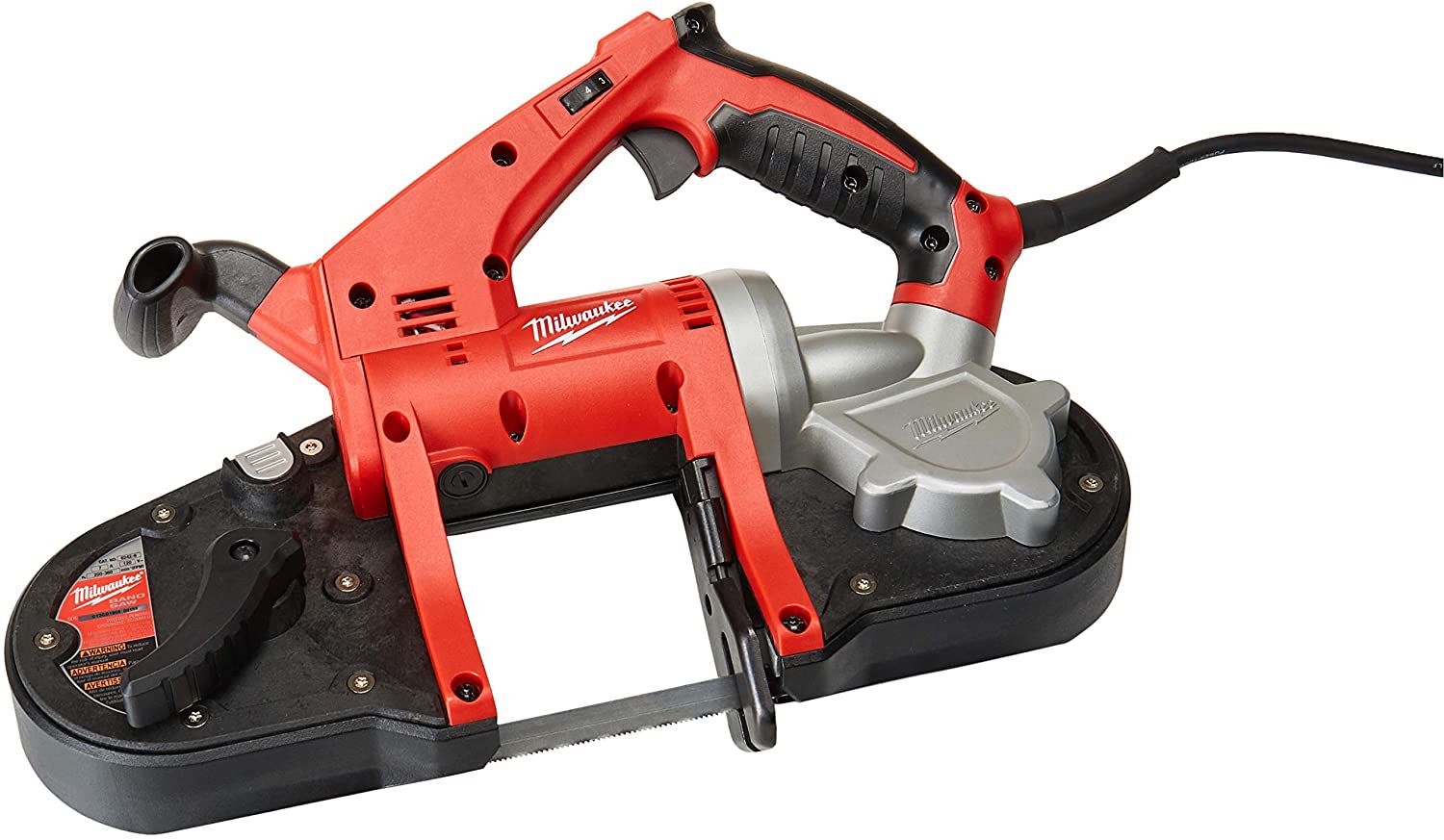 View On Amazon View On Home Depot View On Acmetools.com
What We Like
What We Don't Like

Not everyone has the space or need for a benchtop or stand band saw. A portable option can be the right fit for anyone who likes to work outdoors, bring their saw from worksite to worksite, or generally likes to save space. The compact Milwaukee band saw is a great option for a reliable, portable band saw that can get the job done.

Ideal for cutting pipes and metal working, this band saw is lightweight and easy to move. At less than 10 pounds and only 16 inches in length, you can wield this tool in any scenario and the handy grips make any movement feel natural—even overhead cutting. It features a variable speed system ranging from 200 to 360 rpm so that you can cut through copper or steel exactly at the right speed. You can adjust the shoe without tools and eject the blade easily. It even sports an aluminum gear casing in case you drop it. It has a 3-1/4-inch cutting capacity. This Milwaukee saw comes with a blade and a carrying case as well.

These Are the Best Oscillating Multi-tools for DIY Projects 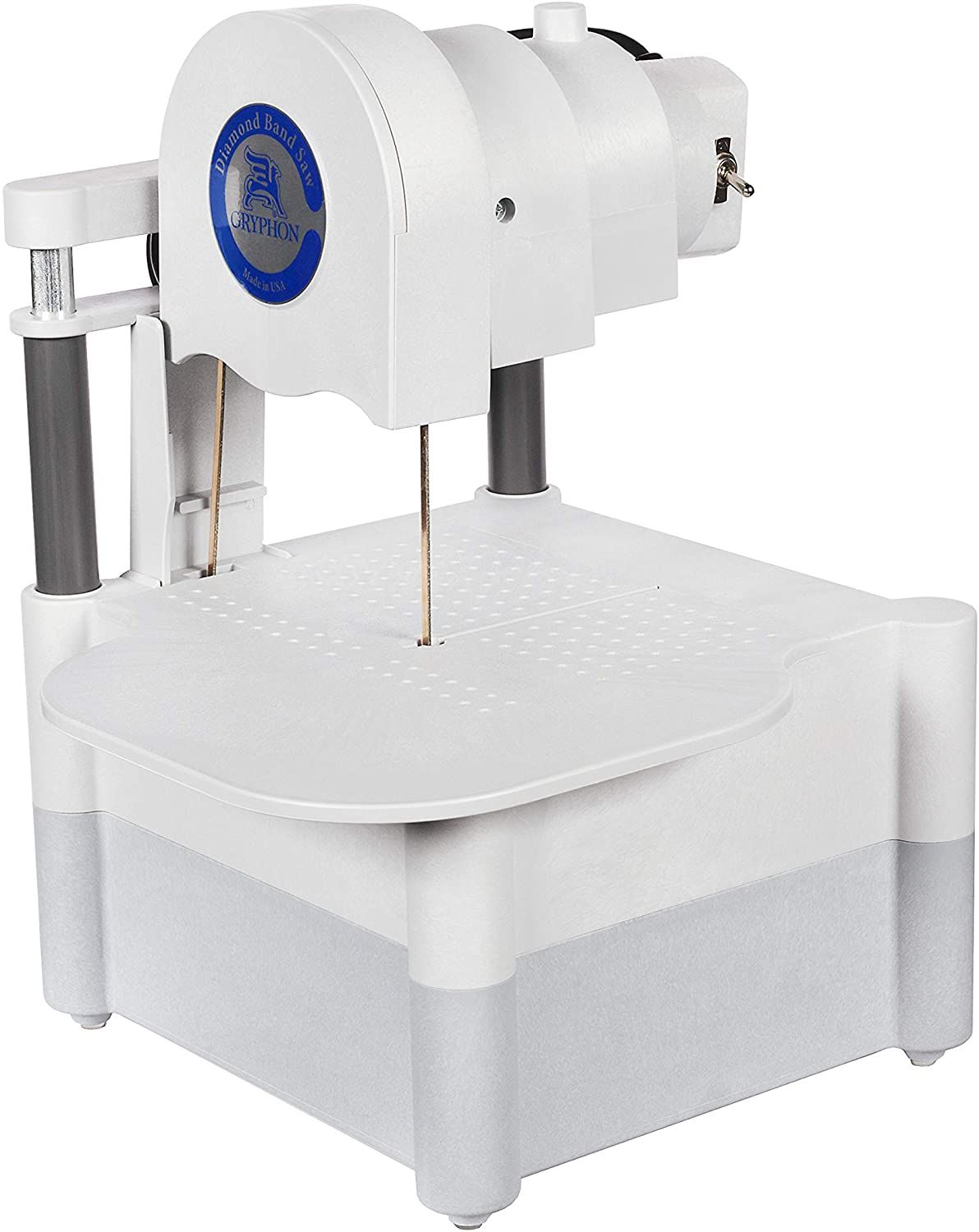 This machine has a very simple design with fewer features than the big wood-cutting band saws. This band saw can be paired with a diamond edged blade and operated at a high speed to slice through glass. It also has an easy-to-use water cooling system. The ⅓-horsepower tool is no frills and very effective. 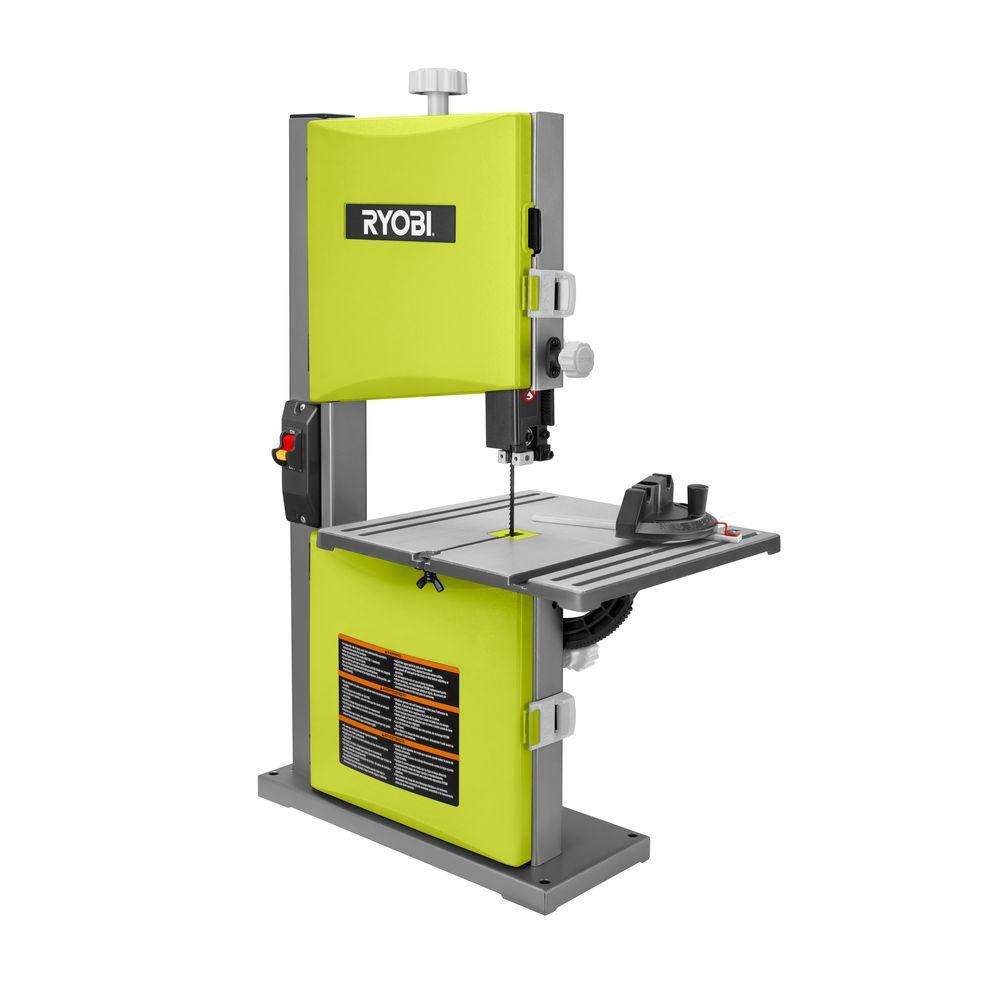 Courtesy of Home Depot.
View On Amazon View On Home Depot
What We Like
What We Don't Like

With that distinctive Ryobi design, the 2.5-amp, 9-inch benchtop band saw is an excellent option for a variety of work. This machine uses an induction motor for cutting pipes, wood and a variety of other materials. It features a 3-1/2-inch cutting height with rapid setting blade tensioners and a blade-tracking window. This Ryobi band saw also feature aluminum wheels and ball bearing supports. It allows for blades that are between ⅛ and ⅜-inches in width.

This band saw is set apart from the others for its reasonable cost and solid performance. Its a great option for amateur woodworkers and crafty people. It can be a thoughtful gift option as well.

Our top choice of band saw, the JET JWBS-14DXPRO (view at Tool Nut), is powerful, versatile, and durable enough even for a professional, but is also well suited to the workshop of an avid DIY woodworker or hobbyist. If you need something less expensive, however, the Ryobi 2.5-amp 9-inch band saw (view at Home Depot) has all the performance you need at the price you’ll like.

What to Look for in a Band Saw

There are two basic types of band saws: those that stand on the floor and those that sit atop a bench or table.

Floor or freestanding band saws are large machines with an attached stand or cabinet. They take up considerable floor space, but have the power and the capacity to tackle larger, harder, and thicker materials. Still, the average DIYer doesn’t need this level of performance.

Benchtop band saws sit atop your workbench or table, and so require less floor space. While many are quite powerful, as a general rule, benchtop band saws aren’t quite as powerful as their freestanding counterparts. However, they are more than adequate for tackling the typical DIY project around the home.

There are also compact, cordless band saws that are useful for construction sites or other jobsites where you’ll be working in tight quarters, doing overhead work, or working with small materials. These saws are often used to cut metal, as well.

There are two numbers that make up a band saw’s cutting capacity: throat and cutting depth.

Throat is a measurement of the distance from the saw blade to the vertical column of the frame. This determines the maximum width of material the tool can handle. When a manufacturer includes a measurement in the tool’s name or description, for example “18-inch,” they are referring to the throat. As a general rule, freestanding band saws have larger throats, typically over 16 inches, while benchtop tools have throats between 12 and 14 inches, although many small machines have a throat measurement of 9 or 10 inches.

Cutting depth is a measurement of the distance from the band saw’s table to the upper blade guides. This is the maximum thickness of material the saw can handle. Between 6 and 12 inches is the most common range of cutting depth.

This article is edited and updated by Michelle Ullman, the tool expert for The Spruce. She has extensive experience not only in writing about all things related to the home, but also in carrying out various DIY projects, including landscaping, painting, flooring, wallpapering, furniture makeovers, and simple repairs.

For this roundup, she considered dozens of band saws, evaluating each for basic features, extras, and customer feedback, as well as input from Andrew Wilson, home improvement contractor and founder of Contractor Adviserly.