The 7 Best Bathroom Exhaust Fans of 2020

Eliminate odors and control humidity with these bathroom fans

Written by
Erica Puisis
Erica Puisis is a writer specializing in interior design. She writes about home products for The Spruce and has also contributed to TechDigg and Smart Home Solver.
Learn about The Spruce's Editorial Process
Erica Puisis 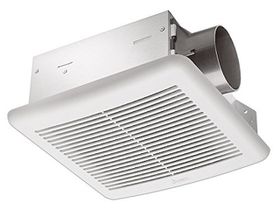 If you’re looking for a bathroom fan that provides sufficient airflow without noisy operation, consider the popular Delta Breez SLM70H. This fan is described as a “sanity saver” by homeowners fed up with noisy bathroom exhaust fans.

With a power level of 70 cubic feet per minute (CFM), this fan will handle bathrooms up to 70 square feet in size. It features a brushless DC motor that’s energy efficient and reliable thanks to “soft start” operation that allows the fan to quickly but smoothly reach full speed.

The unit operates at 2 sones and includes an indicator light as visual confirmation that the fan is on. Though Delta describes this fan as ‘virtually silent,’ reviewers report soft audible noise.

Buy on Amazon Buy on Lowe's

The Broan 688 is rated for 50 CFM and is best fit for small bathrooms of under 50 square feet. It earns frequent praise in reviews for being especially easy to install and can be mounted in the ceiling or wall. However, the somewhat limited CFM may not be the best fit for bathrooms in need of serious moisture management.

This budget bathroom exhaust fan operates at about 4.0 sones, which is considerably louder than other models. Some people find the increased noise level to be a good match for providing bathroom privacy. The bottom line is that this bathroom exhaust fan is great for tight budgets and smaller bathrooms. 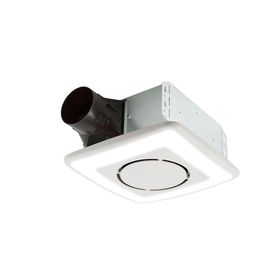 This model from NuTone’s InVent series provides 110 CFM to provide abundant air movement combined with a soft surround LED light you can wire separately or together with the fan.

The built-in LED light runs around the perimeter of the exhaust fan grill for even light distribution. Unlike some other models of bathroom exhaust fans that have a light feature, users find that this model is bright enough to light the bathroom, even as a standalone light source. You won’t need to worry about replacing the light source anytime soon—the 12W LED light source is rated for 25,000 hours of use.

!f you’re concerned about removing moisture from the air, keep the area this fan is serving to 110 square feet or less. The fan operates at around 1.5 sones, making it relatively quiet, but not silent. 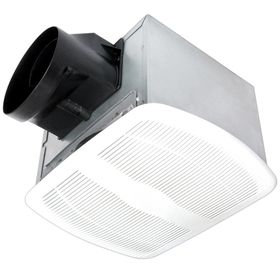 This model from Air King moves air at 80 CFM and operates at just 0.5 sones, but what really sets this fan apart is the integrated humidity sensor. You can program it to kick on when the room surpasses a preset humidity threshold (as high as 80 percent).

Other important things to know about this fan is that it’s Energy Star-certified for efficient operation and is UL-listed for damp environments (like above the shower). It can be installed in rooms up to 80 square feet. Some reviewers did mention that the fan is a little larger than expected, but that it wasn't necessarily a dealbreaker.

Heat things up while keeping moisture away, thanks to a bathroom exhaust fan with heater—like the Broan 9093WH. This combo model includes an exhaust fan, onboard heater, and light.

Step out of the shower or warm up your morning routine with the help of the 1500-watt heater that provides a direct source of heat into your bathroom. A 100-watt incandescent bulb provides plenty of light power to illuminate the room, while the 7-watt night light is just bright enough to help you find your way in the middle of the night. The 70 CFM exhaust fan provides sufficient air movement for bathrooms up to 65 square feet. The unit includes a four-function wall switch that lets you operate each function separately.

For an incognito bathroom exhaust fan, consider the Hunter Sona Bath Fan with Light. This decorative exhaust fan looks more like a conventional flush-mounted light fixture, but inside is a motor capable of moving 110 CFM. It’s a top choice if you’re designing a bathroom that is beautiful and functional.

The Hunter Sona uses two 60-watt light bulbs to provide illumination and includes the option to install a smaller 7-watt bulb for a soft nightlight. People agree that this exhaust fan for bathrooms looks beautiful and could easily be mistaken for only a light fixture. However, the frosted coating on the dome does diffuse the light, so you will need a second source of light in the bathroom as well.

At 3.0 sones, this bathroom exhaust fan is considerably louder than some other top models.

If you don’t have access to an external vent but still want to improve circulation and air quality, consider a duct-free bathroom exhaust fan. The Broan 682 utilizes a fan to produce air movement and a charcoal filter to absorb odors.

A duct-free bathroom fan is a good choice for basement bathrooms or bathrooms with no attic access. In lieu of an external vent, the hardwired fan moves air across a filter to purify it before recirculating it in the space. That means the fan does a good job of improving air circulation and clearing odors in powder rooms and half baths but isn’t recommended for larger bathrooms or for controlling high humidity levels.

Because the unit doesn't hook up to a duct, the product description doesn't include how much noise it produces but keep in mind that it’s not a silent unit.