Written by
Brigitt Earley
Brigitt Earley is a lifestyle writer who covers home decor and gifts for The Spruce. She is a former RealSimple.com editor whose work has also appeared on Apartment Therapy, Reviewed, and more.
Learn about The Spruce's Editorial Process
Brigitt Earley

Our Top Picks
Best Overall:
CB2 Marble Chess Game at CB2
"Equal parts decor piece and functional game, this minimal marble set is hand-carved and polished in India."
Best 2-in-1:
MoMA Chess & Checkers Set at West Elm
"Everything comes housed in a sturdy wooden box, with a lid that doubles as a (reversible) game board."
Best Splurge:
Jonathan Adler Acrylic Chess Set at Jonathanadler.com
"Step up your chess (and decor) game with this 70s-inspired acrylic set, which makes for a great permanent display."
Best Budget:
Chess Armory 15” Chess Set at Amazon
"Unlike other budget-friendly sets—which often come in plastic or cardboard—this set is made of a classic walnut wood."
Best for Beginners:
Winning Moves Games No Stress Chess Set at Amazon
"Action cards, which detail rules of the game and provide helpful hints, make the game a bit less intimidating to newcomers."
Best Travel:
Hey! Play! Wooden Book-Style Chess Board at Amazon
"When folded in half, this full-sized chess board resembles a book—perfect for display on your book shelf or desk."
Best Colorful:
PRINTWORKS for Anthropologie Chess Game at Anthropologie
"A fresh update on a classic game, you won't mind leaving this punchy orange set out on your coffee table."
Best for Kids:
The Noble Collection Harry Potter Wizard Chess Set at Amazon
"Harry Potter fans will appreciate this set, which is a miniature recreation of the wizard chess set depicted in the movies."

When it comes to board games, chess has one of the longest histories. Today, the two-player game is still played by millions, from beginners to advanced competitors, around the world. It's also a compact game that's perfect for road trips, camping, and backyard fun.

If you’d like to try your hand at the game, here are the best chess sets for all skill levels and needs: 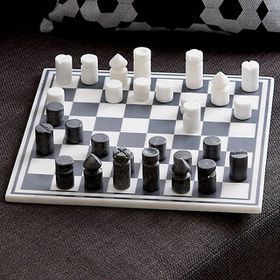 We think this sleek gray and white game is about as sophisticated as you can get. The Banswara marble game board and pieces are hand-made by artisans in India, yielding a smooth finish with an ever-so-slight sheen to catch your eye.

It’s not traditional by any means—the board is heavy, making it more of a permanent decor piece than a game you can assemble and disassemble on a whim. Plus, the pieces are not your typical Staunton-style—they are modern interpretations.

Though a beginner might have some initial trouble identifying pieces, it should become natural in no time. 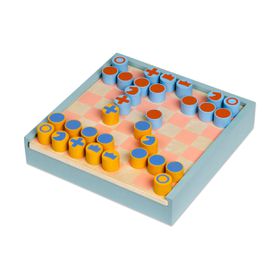 You'll never have to choose between chess and checkers again with this colorful set, which gives you the option to play either. Made of sustainably grown rubberwood, the set includes 32 chess pieces and 24 checker pieces, along with a reversible game board which also doubles as a lid for the storage box. A bright pastel color scheme makes gameplay extra fun. 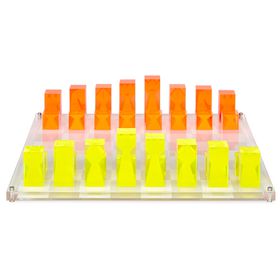 There's no denying it: this set is an investment. But, if you're looking for a piece that will serve not only your chess needs but your decor needs as well, it's a great option.

Both the chess board and pieces are made of acrylic, lending the set a retro vibe that's only accentuated by its oversized construction. Depending on the look you're going for, you can choose between an electric orange and yellow or smoke and clear color scheme. Each of the 32 pieces are screen printed with their character silhouette (Kings are given a cheeky mustache, while the slightly smaller Queens have a clearly defined pout).

While you'll surely want to leave this work of art out on display, if you do choose to store it, you can do so in the included box.

When it comes to budget-friendly chess sets, the vast majority of options are plastic or cardboard—not exactly what an avid player is looking for. But this set turns that school of thinking on its head—for about the same price as your average board game, you can get this nice, slightly more compact wooden chess set.

All in all, it’s a great mirror of other much pricier sets. It features a walnut wood board with traditional style carved pieces, plus flips to reveal individual felted storage compartments for each game piece. When you’re ready to table the game for the time being, simply stash pieces there, fold the board in half, and you have a convenient storage case. 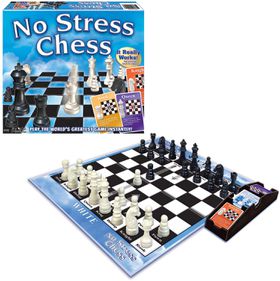 Buy on Amazon Buy on Bed Bath & Beyond Buy on Kohls.com

If there’s any downside to the game of chess, it’s that there’s a definite learning curve. It’s not the type of game you pick up and can do with your eyes closed in no time. It requires knowledge of the game, skill, and strategy.

The good news: game sets like this one make learning a little bit easier. Kids and adults alike will appreciate helpful teaching features, like “action cards” that detail illustrated the rules of the game and helpful hints, including the way each piece can move. The double-sided game board itself is also illustrated to help remind a new player where to position pieces during play.

What you sacrifice with this particular setup is refinement. The board and pieces are cardboard and plastic, respectively. But it’s a price many learners, particularly those with children, are willing to pay, as they say, it really does make learning a breeze.

The 5 Best Books About Chess Openings

Buy on Amazon Buy on Kohls.com

If you want to have the option to play chess while on the go, look no further than this folding set. At 11 x 11 inches, it's the size of a standard chess board—no sacrifices here. It folds in half for easy transport and storage, and the interior has enough space to hold all of the 32 wood Staunton pieces. Plus, the edges are meant to resemble a book spine, so you can display it on a book shelf without a problem. 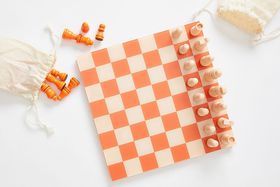 Freshen up your chess play with a more vibrant board. Exclusive to Anthropologie, this set from Printworks has all of the normal fixings of your usual chess board, in a bright orange color palette. The board itself is plexiglass, which is surprisingly durable and easy to clean in case of any messes. At 9.75 sq. inches, it's slightly smaller than your usual board, which makes it great for those with limited space. All of the 40 wooden game pieces come in a cloth bag for easy storage and transport—and the entire set comes in a minimal, turquoise and orange box that you won't mind showing off.

For kids, choose a game set with a little more whimsy to hold their attention through long rounds of chess. This set mirrors the traditional-style sets, so they’ll learn the rules of the game and have no problem switching to a more traditional game board once they get older, but will better capture their interest for the time being, as it’s a highly detailed miniature recreation of the wizard chess set depicted in Harry Potter and the Sorcerer's Stone.

The game, which is officially licensed by Warner Brothers, looks just like it does in the movies. Though hard molded plastic, each two- to four-inch game piece is expertly and intricately designed for the most realistic look. If there’s any downside, it’s that, because the pieces are large and intricate, they tend to crowd the board a bit. At the end of the day, this shouldn’t bother novice and recreational players, but it is a consideration for anyone engaged in more serious play.

The 8 Best Board Games for Kids in 2020
Final Verdict

The best overall chess set is the House of Staunton Grandmaster Chess Set (view at Amazon), which boasts a sturdy board, well-made pieces, and a moderate price tag. However, if you’re new to the game of chess, we recommend the Winning Moves Games No Stress Chess Set (view at Amazon). It comes with 56 “action cards” that detail the rules of the game and provide helpful hints to make chess less intimidating to newcomers.

Why Trust The Spruce

This roundup was written by Brigitt Earley. She has written and edited hundreds of gift guides and articles about consumer products for various publications over the course of the last 10 years. Though not an avid player anymore, she learned to play chess at a very young age.