Add some more power to your DIY projects

Michelle Ullman
Michelle Ullman has written hundreds of articles on home decor since 2011. She's a self-taught decor expert who contributes to several publications.
Learn more about The Spruce's Editorial Process

A power drill is a must-have in every DIYer’s tool kit. With the right attachment, you can drill all sorts of holes, drive screws and nails, pull screws out, buff or sand rough materials, and mix paint and other liquids.

While cordless drills admittedly win in the “most portable” category, they can’t compete with corded drills when it comes to power, speed, and the ability to keep on working as long as you want to without having to stop for a battery recharge or replacement. Plus, without the weight of a heavy battery pack, corded drills typically weigh less than their more portable cousins, which can be a big factor in comfortable use during long work sessions.

Along with power, when choosing a corded drill you'll want to consider rotational speed, measured in rotations per minutes, as well as the tool's chuck size, which is the clamp on the front of the drill that holds the bit in place. A 3/8-inch chuck is standard on most drills, but heavy-duty models typically have a 1/2-inch chuck, and lightweight tools often have a 1/4-inch chuck.

Here are the best corded drills for all of your DIY needs. 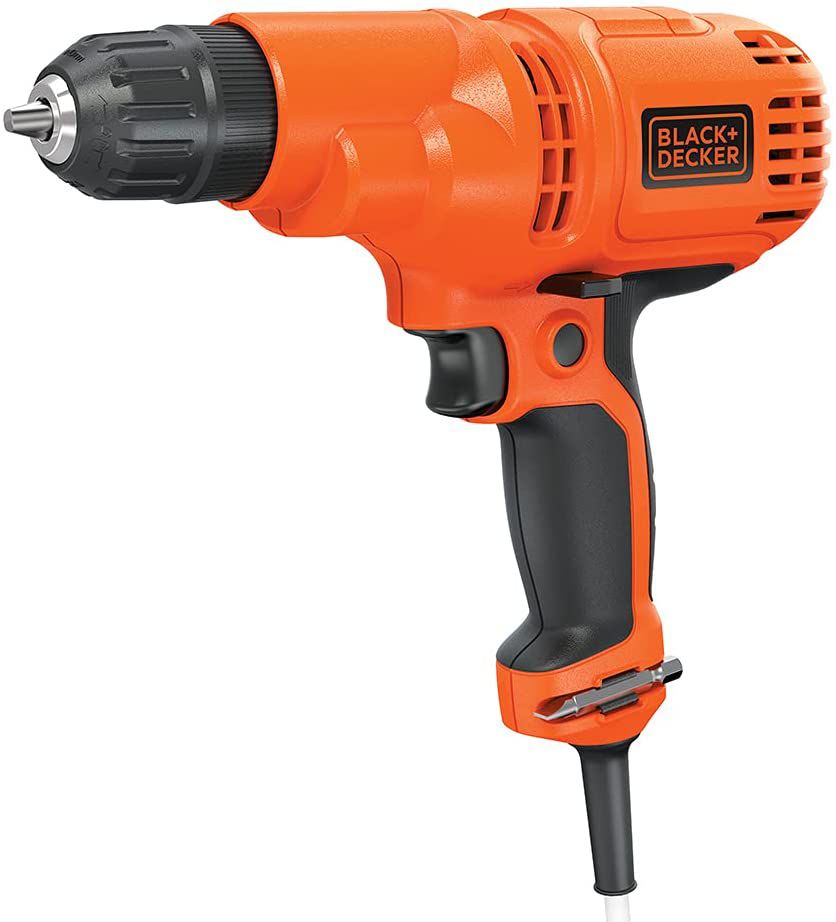 Don’t let its compact size fool you. The BLACK+DECKER corded drill packs a powerful punch with its variable speeds. The 5.2-amp motor provides a lot of juice with a constant power button for quickly powering through most any job around the home. It comes in at just 3.5 pounds that include an On Board Bit Storage chamber in the hollow of the handle. The 3/8-inch drill with keyless chuck has a one-handed forward/reverse slider and variable speed switch for accurate drilling. Put it on slow for hardy metal to get a precise hole and pump it up to bite through masonry and wood in minutes. This little workhorse adjusts from drilling wood, drywall, and metal to taking on sanding and buffing jobs with attachments.

This pick is great for the DIYer who wants a drill that weighs less and can last a long time. This pick gets high remarks for the power it provides in a lighter frame with a small price tag. Many have gone from a cordless back to a corded and are impressed with how much better this handles. 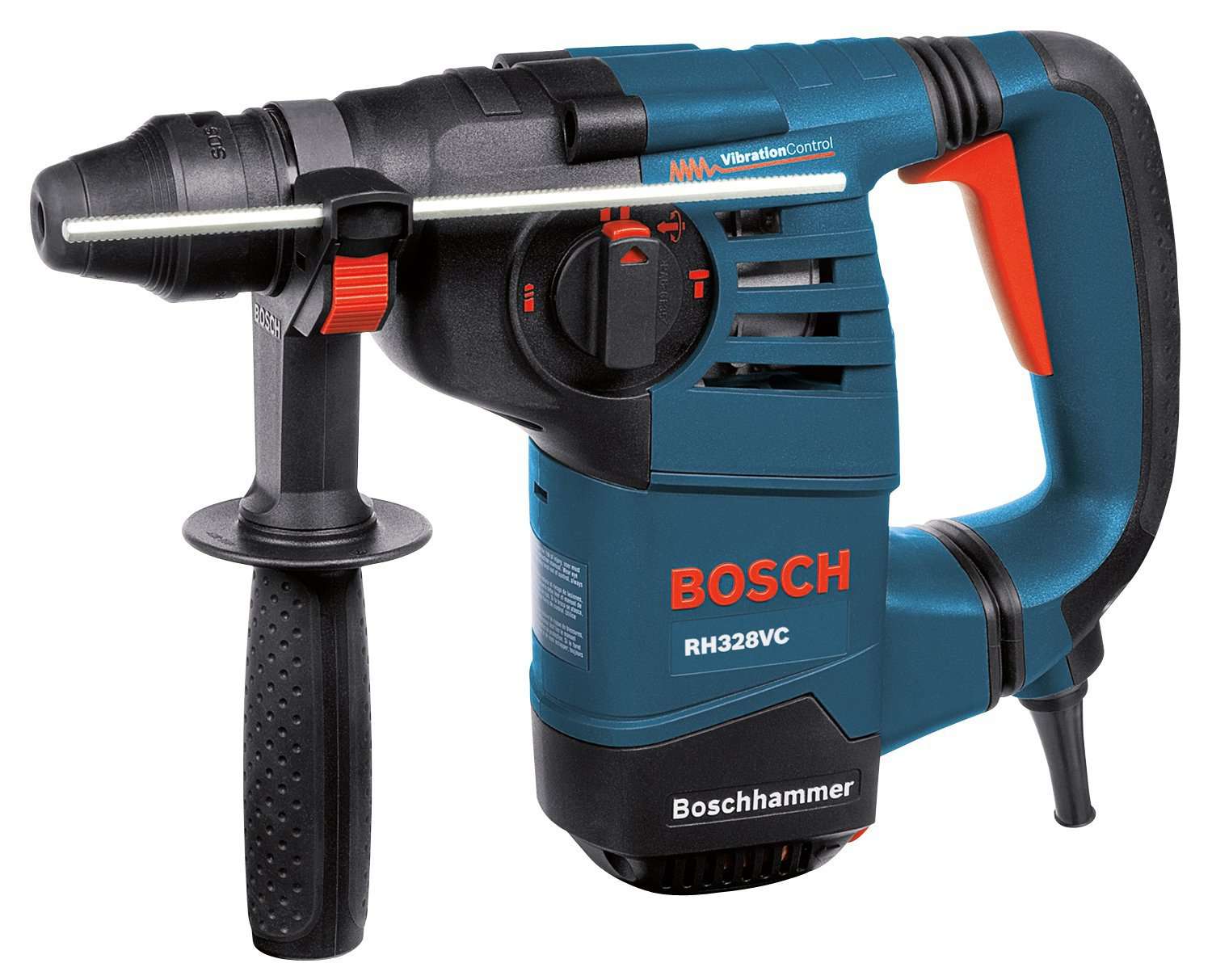 A good hammer drill is ​heavy duty. These tools not only have the rotating movement common to all drills, but also add in a slight "hammering" burst of energy to increase the drill's power. The rapid hammering motion is powerful enough to fasten a railing to concrete or take down an old steel fixture tied to a house’s foundation.

The Bosch 8-amp hammer drill can drive quickly into concrete and is tough enough to remove stubborn tile, drywall, and more. And thanks to its vibration-control design, even demolition jobs or remodel won't put too much strain on your hands. The power-to-weight ratio is impressive at 8 amps and 2.6 foot-pounds impact energy, yet the tool is a lightweight 7.7 pounds. It's 1-1/8-inch chuck holds the largest bits for the utmost in drilling power.

If all that isn’t impressive enough, the three modes of operation on the multifunction selector make this drill powerful and versatile: choose from rotation only, hammer only, or rotation plus hammer. The Bosch Vario-Lock feature puts the drill in neutral so you can choose from 12 different positions to get the job done right.​ 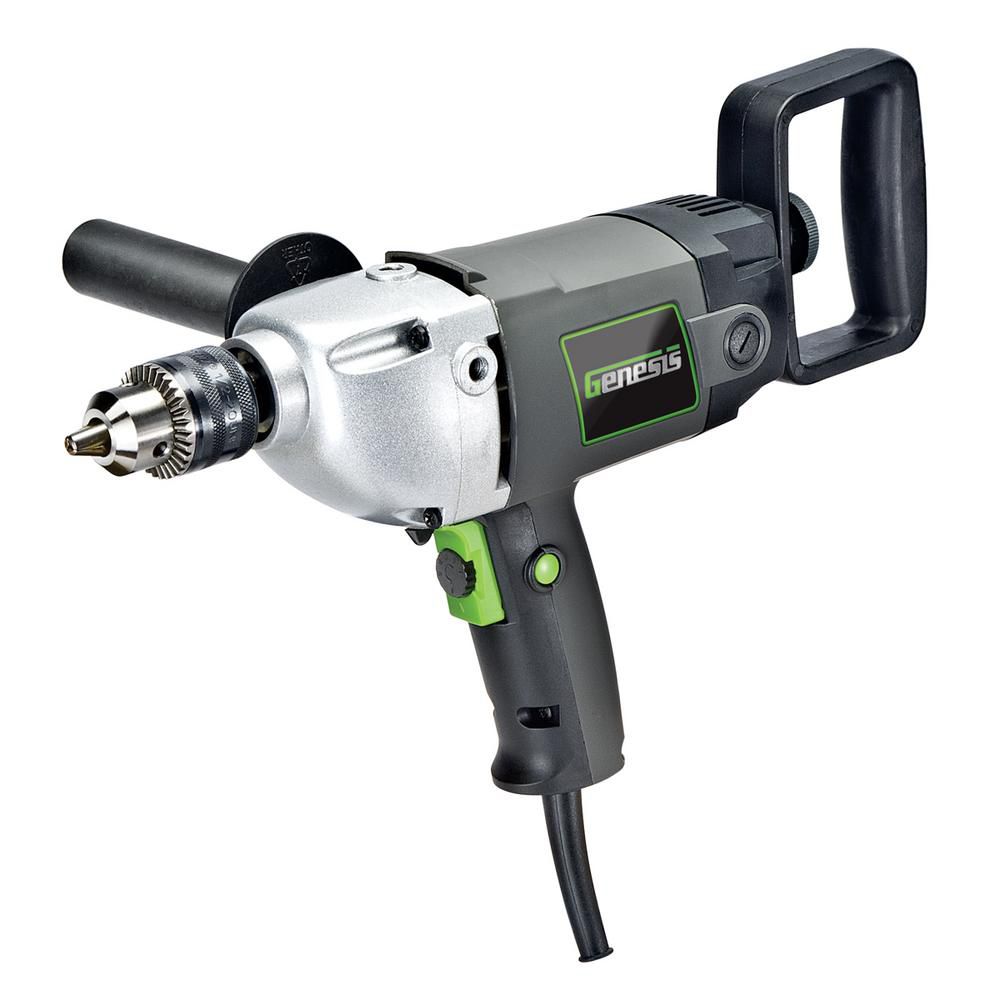 View On Amazon View On Hardwareandtools.com

Reliable and inexpensive for all it can accomplish, the Genesis Variable Speed Spade Handle corded drill has a powerful 9-amp motor that does a laundry list of duties. The hard-working drill has a 1/2-inch chuck that works well with the larger bits needed to mix mud or drywall putty. The variable speed power is delivered through a ​gearbox that is encased in a protective housing made of die-cast aluminum. With 120 volts, the motor can drill through steel and wood, mix paint, mud, or compound. The lock on ​button makes for less effort for long jobs and the variable speed dial on the trigger allows for the exact speed that you need for any job from 0-850 rpm. 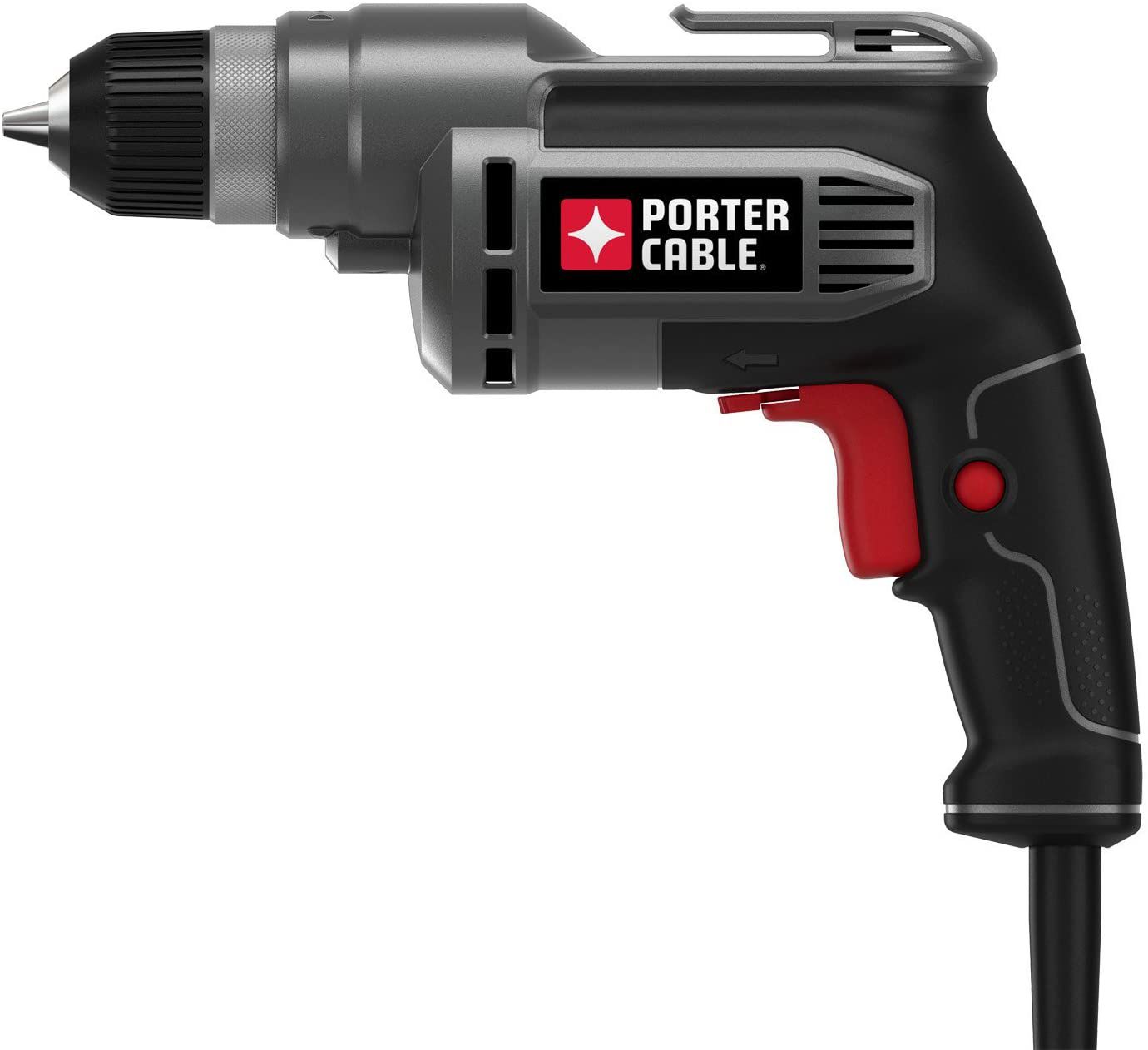 This popular PORTER-CABLE drill is designed for high-performance as well as comfort. If you have a job that is going to be a long, repetitive one that requires bit changes as you head to the finish line, this pistol grip drill gives as good as it feels. The keyless 3/8-inch chuck allows for quick and easy bit changes. The 6.5-amp motor offers power with a 0-2,500 rpm variable speed trigger. A lock-on button gives solid control for this comfortable and ergonomically designed pistol grip drill that is ideal for prolonged use on big or little jobs. The versatile and powerful drill can get through steel and wood jobs with the PORTER-CABLE hand-position options offering better control and comfort than many of this drill’s counterparts on the market. 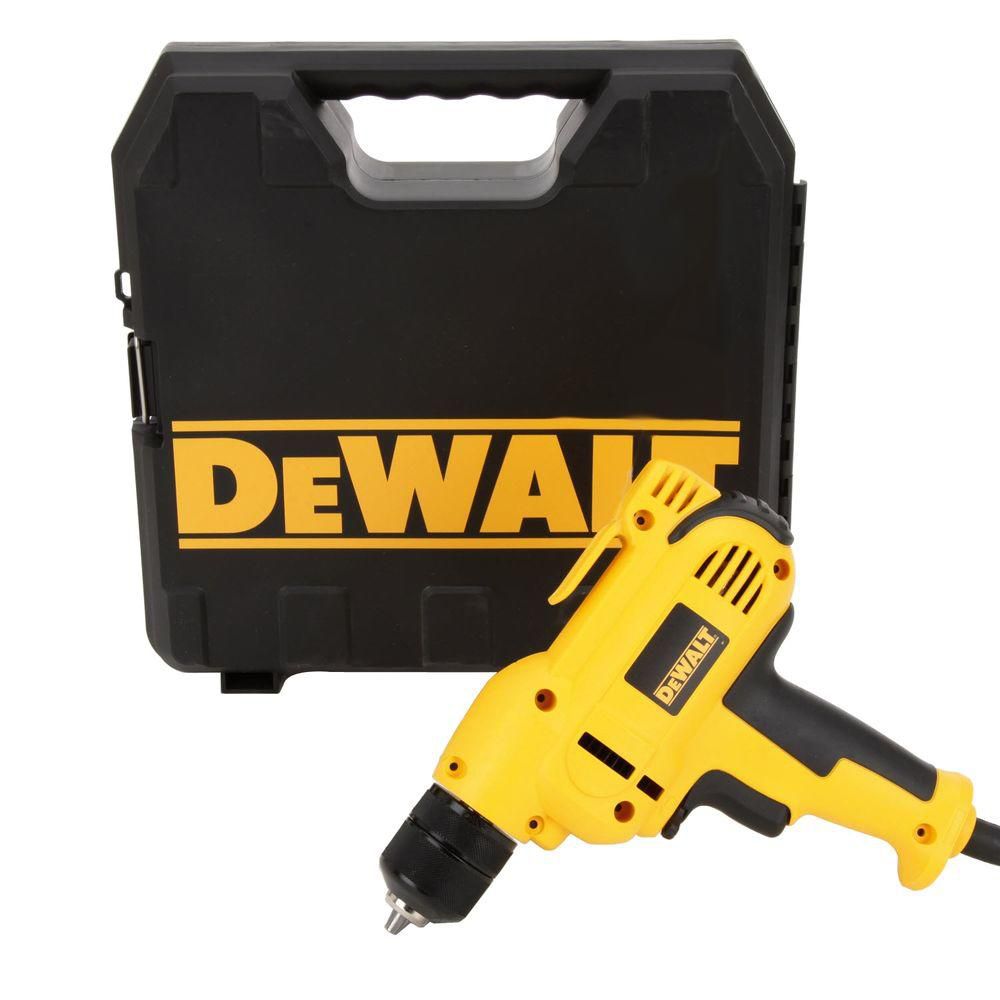 Powerful and tough, this drill will show up for any big job and not give up until complete. The DEWALT 8-amp motor is primed for heavy-duty jobs and grinds away at steel all day long without missing a beat. The soft grip paired with the 3/8-inch, all-metal, ratcheting keyless chuck allows for better bit retention on slippery sheets of steel. Powerful and rugged, the speed-reversing drill can move through sheets of steel with ease. The reversing trigger has a variable speed to get in and out of tough spaces quickly when drilling and fastening.

As a bonus, the all-ball-bearing construction gives the drill a long life to get through project after tough project. 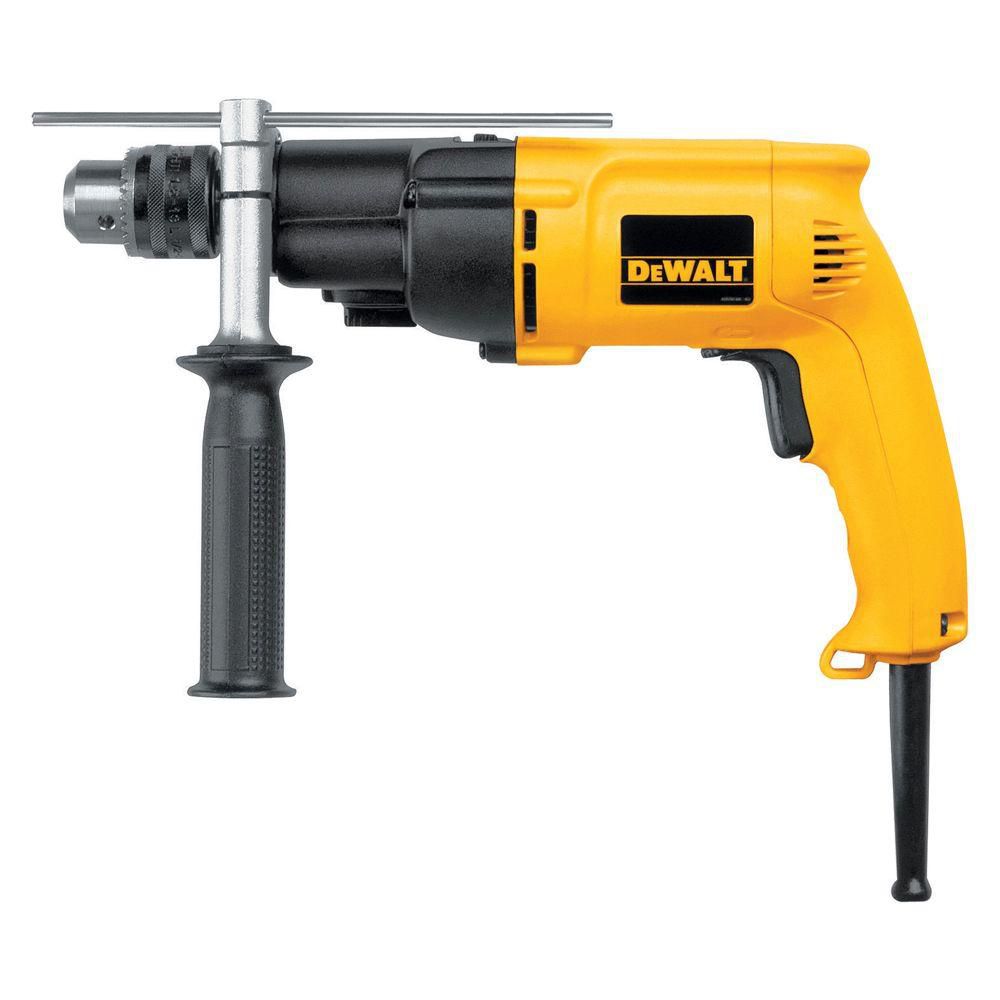 The hefty hammer function on the DEWALT DW505K belies the lightweight of this hammer drill, which is just over 4 pounds. It has a 360-degree side handle with depth rod for better control and depth accuracy. It offers high performance with a dual-mode as well as overload protection. You can get more exact hole placement on your work surface with the variable speeds that are easy to manipulate from the soft pistol grip handle design. It has a high-torque gear system to tear through jobs, from framing to fastening. 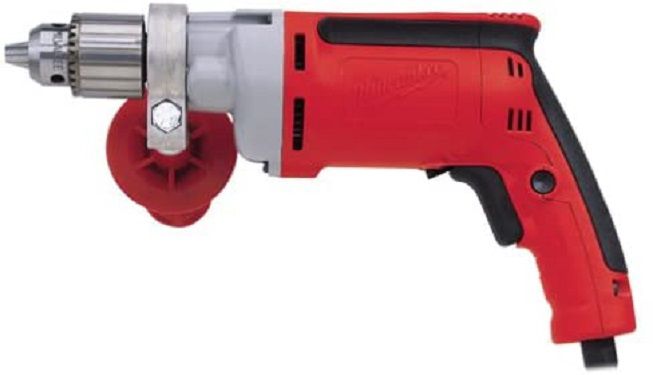 Even though it has a powerful motor, this baby hums due to the quiet rotation of its helical-cut steel gears. With an 8-amp motor and 1/2-inch keyed chuck that can handle pretty much any bit that you may have, the Milwaukee will get through long, hard jobs without complaint. The clutch is designed to limit the max amount of torque the drill can apply to a fastener so that you have a consistent depth throughout the project. The side handle designed for control on the Milwaukee is needed once the drill is on the job due to the serious torque. The longtime tool company is known for creating easy-to-use and hard-wearing products that last year after year, job after job. 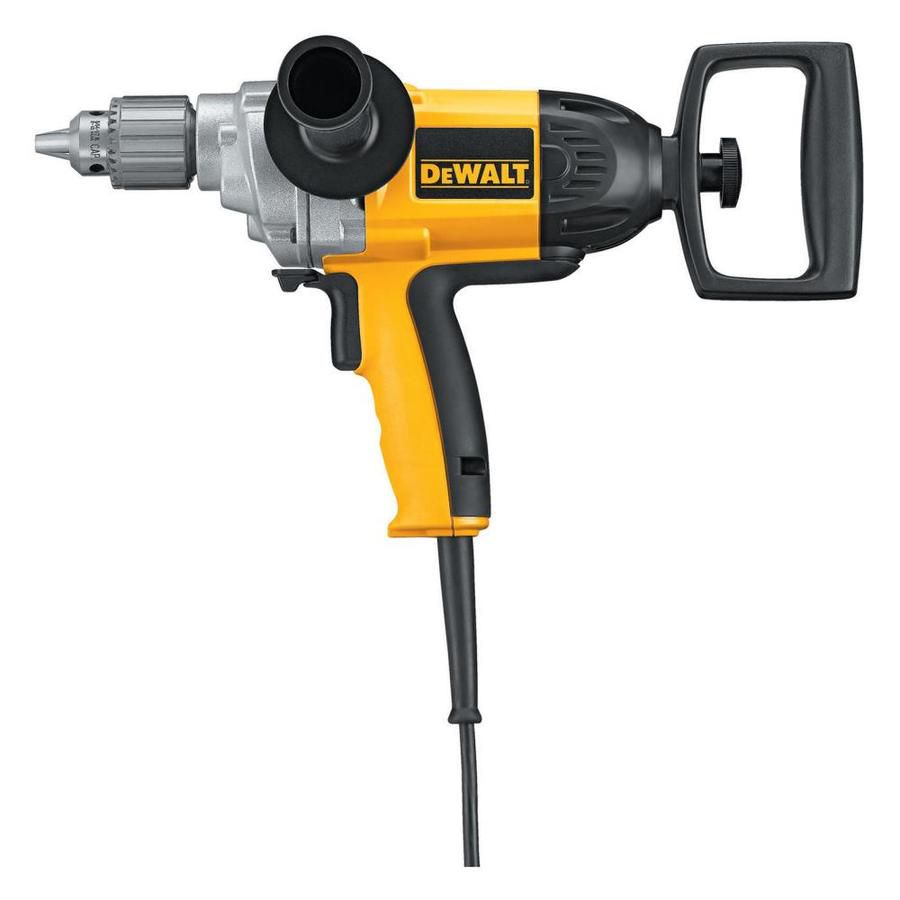 One of the more powerful drills in this category, the DEWALT has a 9-amp motor with a variable speed range of 0 to 550 rpm. It gives great torque for many big jobs, from mud mixing to drilling and driving screws. It’s lightweight at 7.5 pounds and delivers a lot of power without causing arm exhaustion as you manipulate the 120-volt motor that gives out 600 watts of power. The rear spade handle has two positions and the side handle has three positions for those larger applications that need all the control you can manage with such a powerful motor. This bad boy with an ergonomic soft handle delivers without wearing you out. It is a superior machine on the hole saw drilling in steel, auger bit drilling in wood, self-feed bit drilling, spade bit drilling as well as mixing and more.

What to Look for in a Corded Drill

The big advantage to choosing a corded drill over a cordless model is power. Corded drills, which run from your home or worksite’s 110-volt electrical supply, rather than a battery as with cordless drills, have plenty of nonstop muscle to get the job done.

Amps measure the power of a corded drill’s motor. Most of today’s corded drills have motors that fall between 5 amps and 10 amps, with the higher number being more powerful. That’s important, because the stronger the motor, the more torque—that’s the force with which the drill bit rotates—the tool possesses. Still, don’t automatically assume that you need the most powerful drill; for general around-the-house tasks, a 5-amp to 7-amp motor is usually sufficient. But if you routinely drill through hard materials, such as masonry or metals, you’ll find a higher-power drill is better suited to your needs.

The chuck is the clamp at the front of the drill that holds the bit in place. When purchasing drill bits, you need to select bits the same size or smaller than your drill’s chuck.

The three most common chuck sizes are:

You’ll also want to consider the ease of switching out drill bits.

Rotation speed refers to how many full revolutions the bit makes per minute (rpm.) As a general rule, corded drills have maximum rotation speeds of 200 rpm to 2,000 rpm. For typical DIY tasks around the house, 500 to 1,000 rpm is sufficient. Don't assume that the faster the drill, the more powerful it is—that's not necessarily true, as it's the amount of torque, not speed, that determines how well a drill penetrates hard materials.

Many lower-end drills have just one maximum speed, but higher-end drills often have variable-speed settings, letting you choose from two or more speeds. Usually, lower speeds are best for drilling into harder materials, while faster speeds are suited to softer materials.

This article is edited and updated by Michelle Ullman, the tool expert for The Spruce. She has extensive experience not only in writing about all things related to the home, but also in carrying out various DIY projects, including landscaping, painting, flooring, wallpapering, furniture makeovers, and simple repairs. For this roundup, she considered dozens of corded drills, evaluating each for basic features, extras, and customer feedback.