Get ready to get rolling with these fast-paced options

Dice games are fun, portable, and often move quickly, making them a great option for parties or family game nights. And depending on the pieces you're using, playing with dice may help younger kids with skills like math, reading, or color identification. Since dice games may require fast thinking and usually have very concrete outcomes (if you roll a six, there's no way to make it a five), younger children may end up feeling frustrated. Depending on the game, you can guard against this by simplifying the rules or letting them team up with an adult or older sibling.

We researched dozens of dice games, and here are our choices for families, kids, game nights, and even outdoor play. 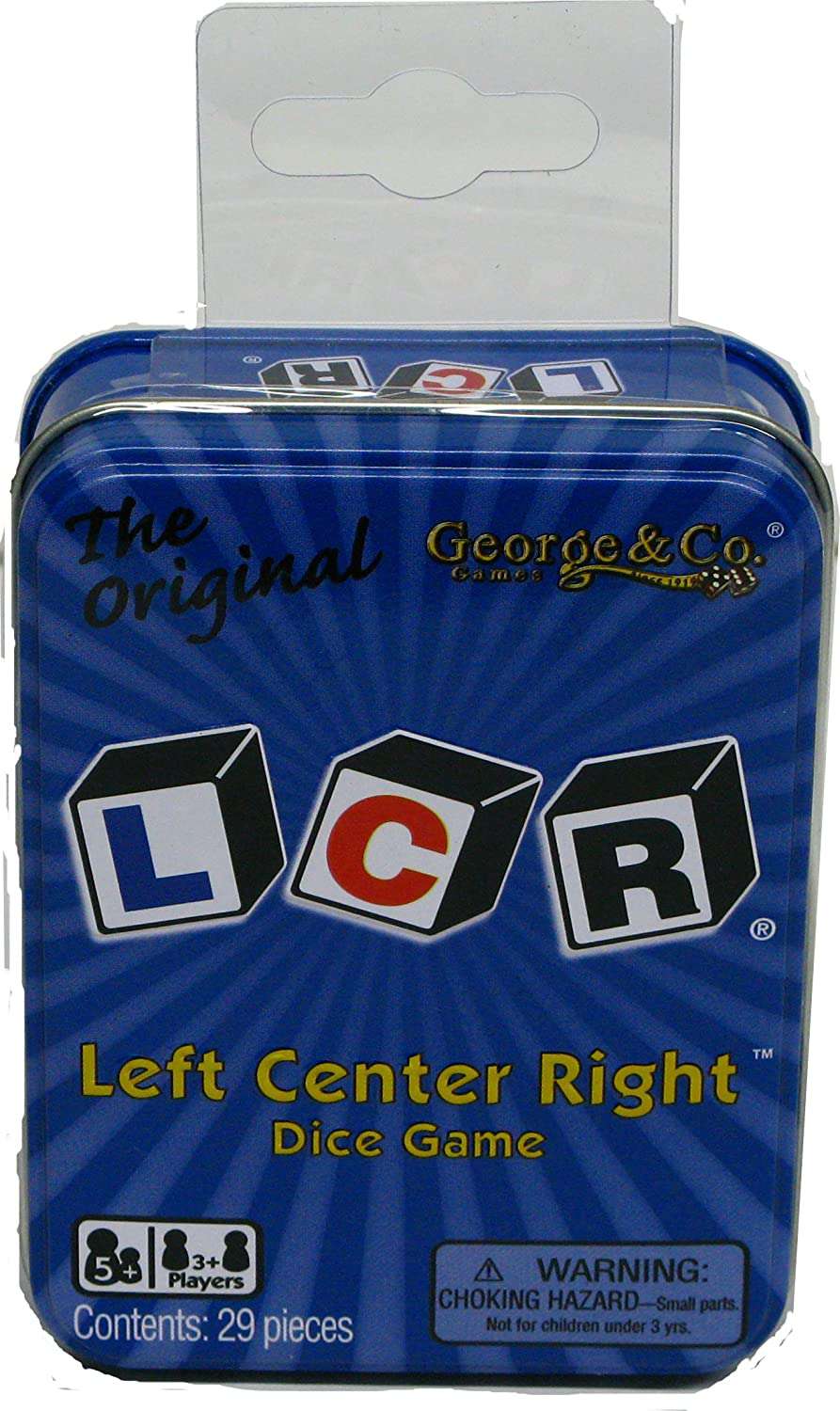 Players: Three or more players | Age Range: 5 years and up | Length of Play: Not listed

The biggest problem with playing Left, Center, Right? This quick-moving game, also known as LCR, can be quite addictive. It's suitable for children ages 5 and older, making it a great option for family game nights, and you'll need at least three players. Note that you don't need the official game to play, although it makes it more straightforward; if you only have regular dice, you can designate certain numbers for the letters.

To play, you roll the dice (there are three total) and pass chips, and the game is entirely based on luck rather than strategy. If you roll "L" you pass a chip to the person on your left, "R" you do the same but to the right, and "C" means you put a chip in the center. (Some groups might up the ante by playing with coins instead of chips.) Some sides have dots, and if you roll one of those, you do nothing. As you run out of chips, you roll fewer dice, and the game ends when only one player has chips left. They get to keep those—as well as the center pot. There's really no limit on how many people can play, but since the game only comes with 29 tokens, you may need to create new ones for additional players. 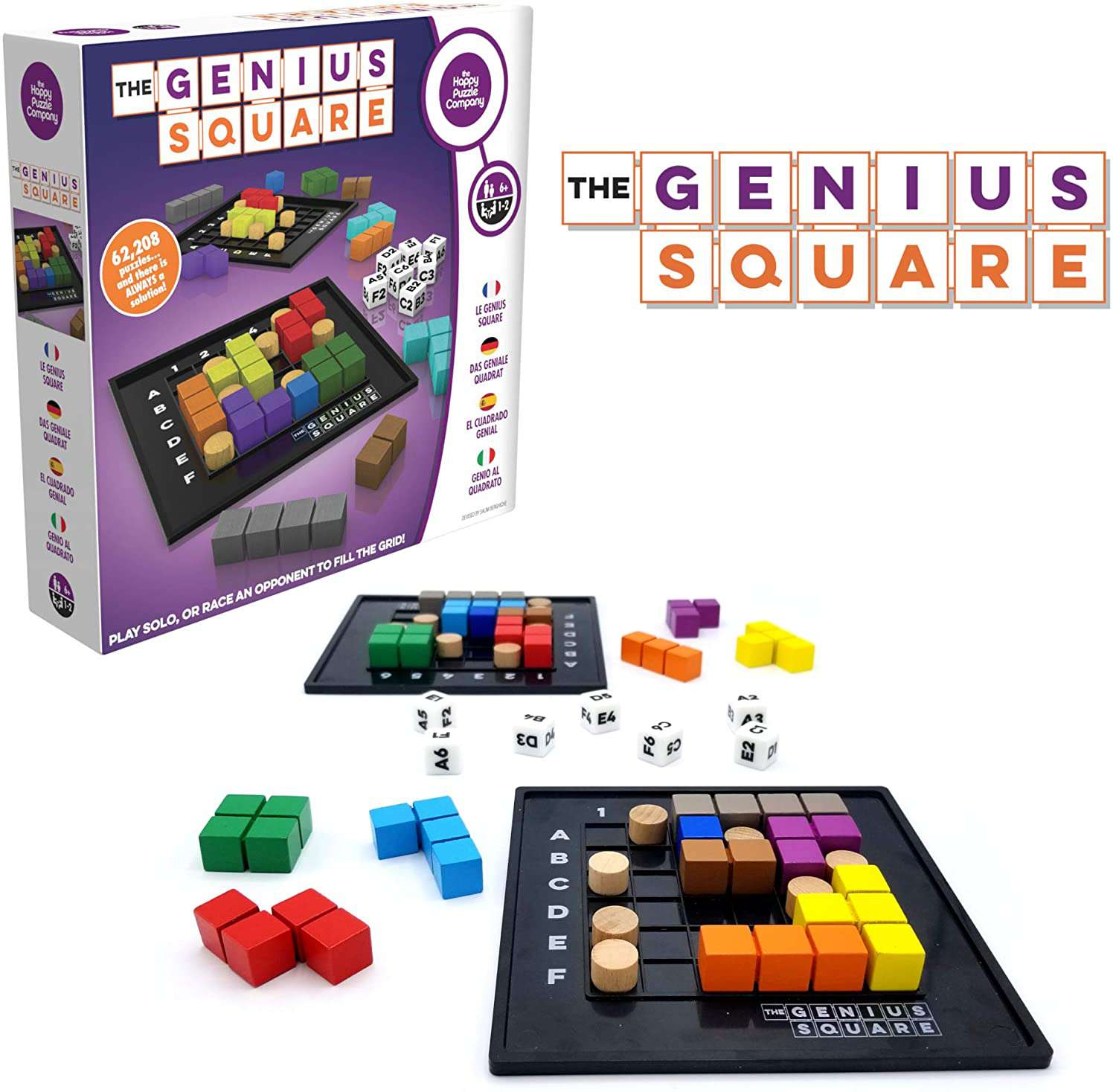 View On Amazon View On Fatbraintoys.com

Players: One or two players | Age Range: 6 years and up | Length of Play: Less than one minute per round

Genius Square is recommended for kids ages 6 and older and works for either one or two players, each of whom has their own grid-shaped board. In this game, the seven dice determine where each person puts blocker pieces on their grid. When the game begins, the two opponents must race to fill their board with the nine pieces, each of which has its own shape. Most rounds are finished in less than one minute.

The game doesn't get old because thanks to the randomness of the dice outcome, there are more than 60,000 grid possibilities. It's also a great way for kids to practice skills such as logic, spatial reasoning, and problem-solving. Think of it as a screen-free and more interactive version of popular video games like Tetris. 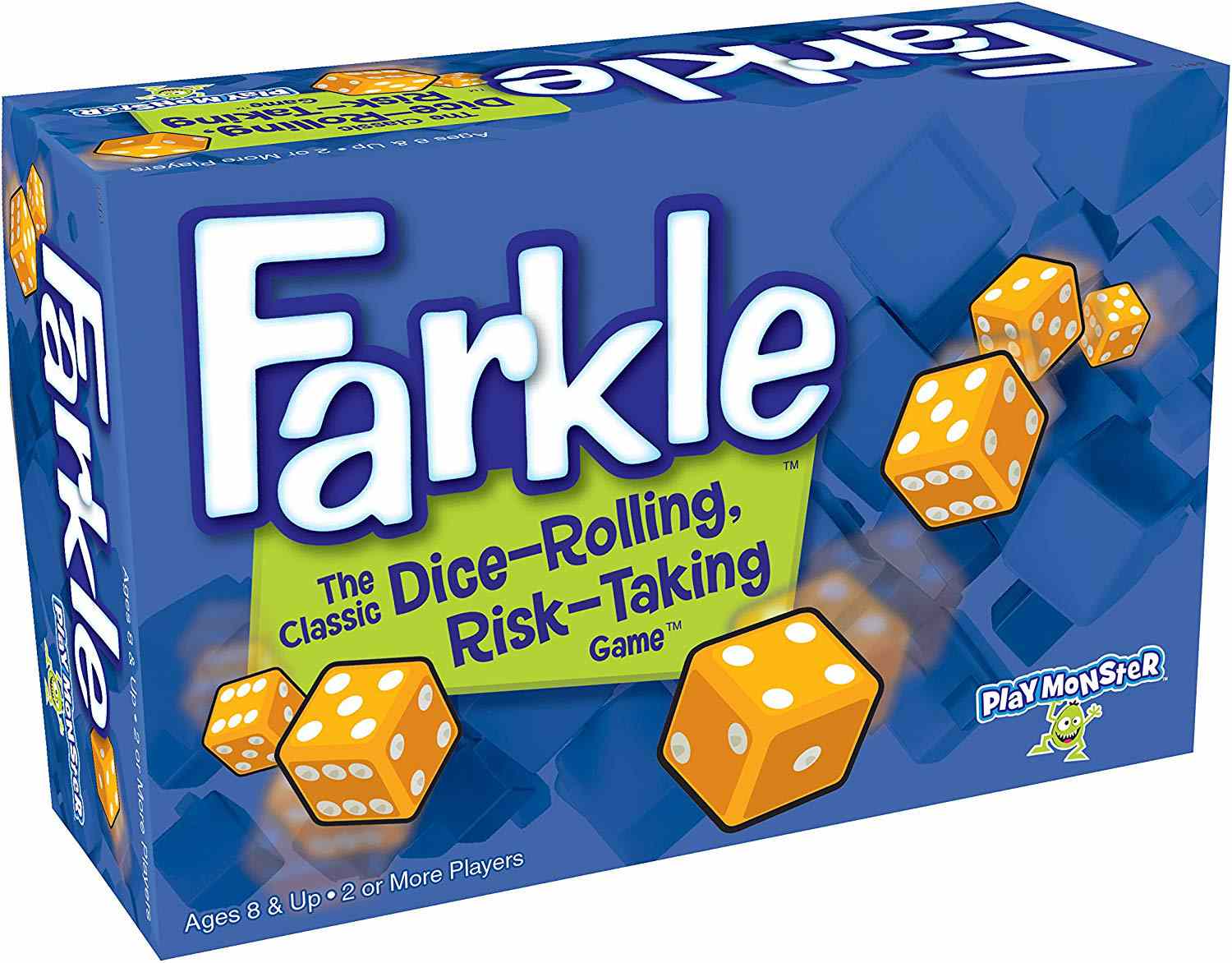 View On Amazon View On Kohls.com

Players: Two or more players | Age Range: 8 years and up | Length of Play: About 30 minutes

Farkle, which is aimed at kids 8 and older and takes about 30 minutes to play, is a fun way for them to start to learn about taking risks. The game mixes both chance and strategy, and it's fun for families because adults can also be involved in the teaching process. It's also not so fast-paced that younger children will feel lost, and there are no timers or buzzers to worry about.

The goal is to earn the highest score in the game above 10,000 points. You earn points based on the combination you roll, and when nothing is earned, that's called a "farkle." When this happens, you lose your running total and start over, so you'll need to balance wanting to keep rolling for more possible points or stopping and staying safe. Farkle is sold in three different sizes: This traditional version, which comes with a score pad; the Dice Cup version (just dice and a cup); and the Nano Keychain, which is a small cup with tiny dice inside. 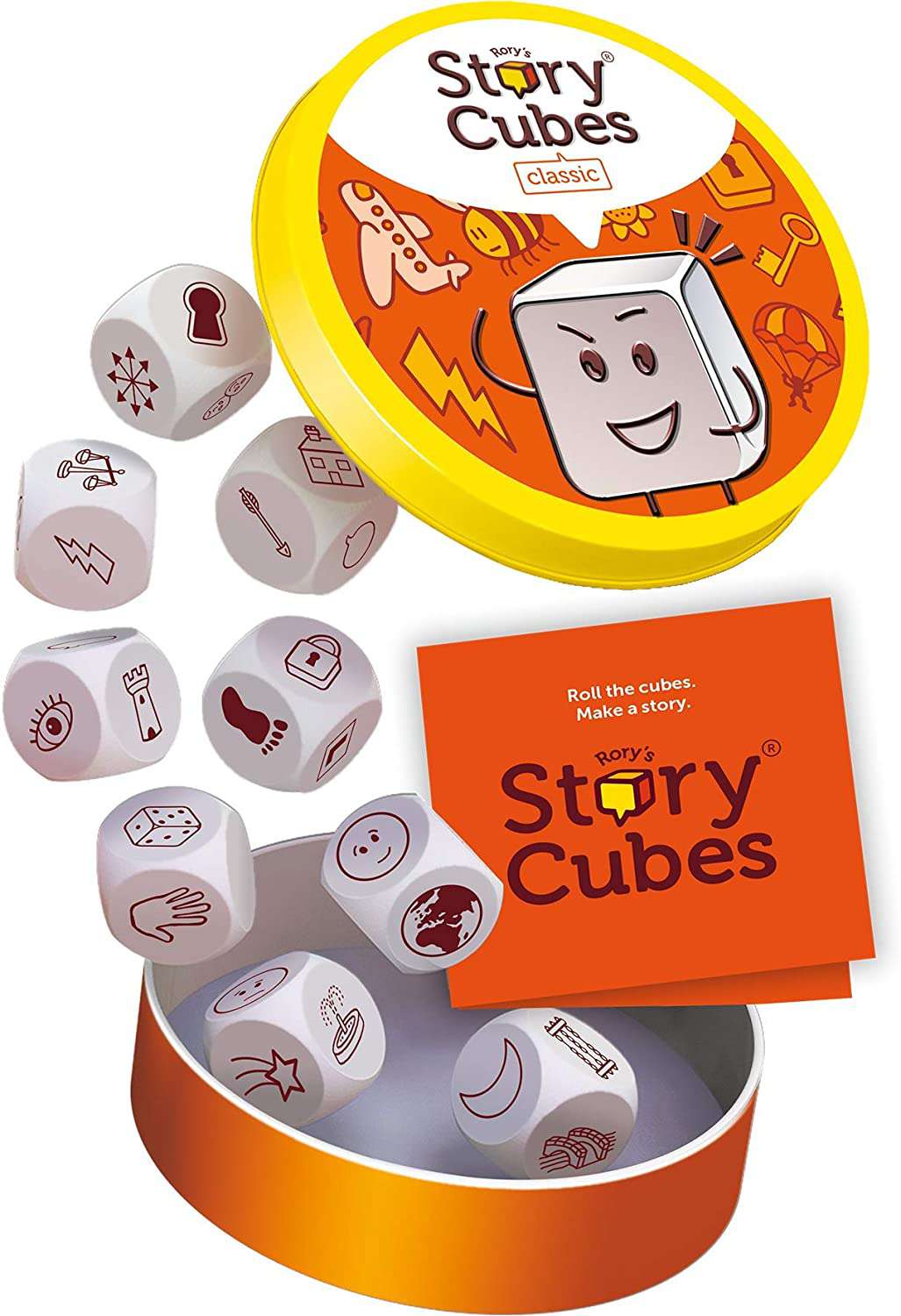 Players: One or more players | Age Range: 6 years and up | Length of Play: Not listed

This game encourages even the youngest kids to use their imaginations and express creativity. There are nine dice, and each one has six sides for a total of 54 icons that are open to different interpretations. You can play in different ways, but the point is to use the dice to tell a story, and you're encouraged to begin with "Once upon a time…"

Some players might roll and split dice into groups of three for beginning, middle, and end. Others might choose the first image that jumps out at them. The creators of the game say there's no wrong way to play and that often your first instincts are the best. This pack comes with three Story Cubes with different themes: original classic storytelling, travel, and actions. For an added challenge, ask your older kids to write up the story they've created and read it aloud. 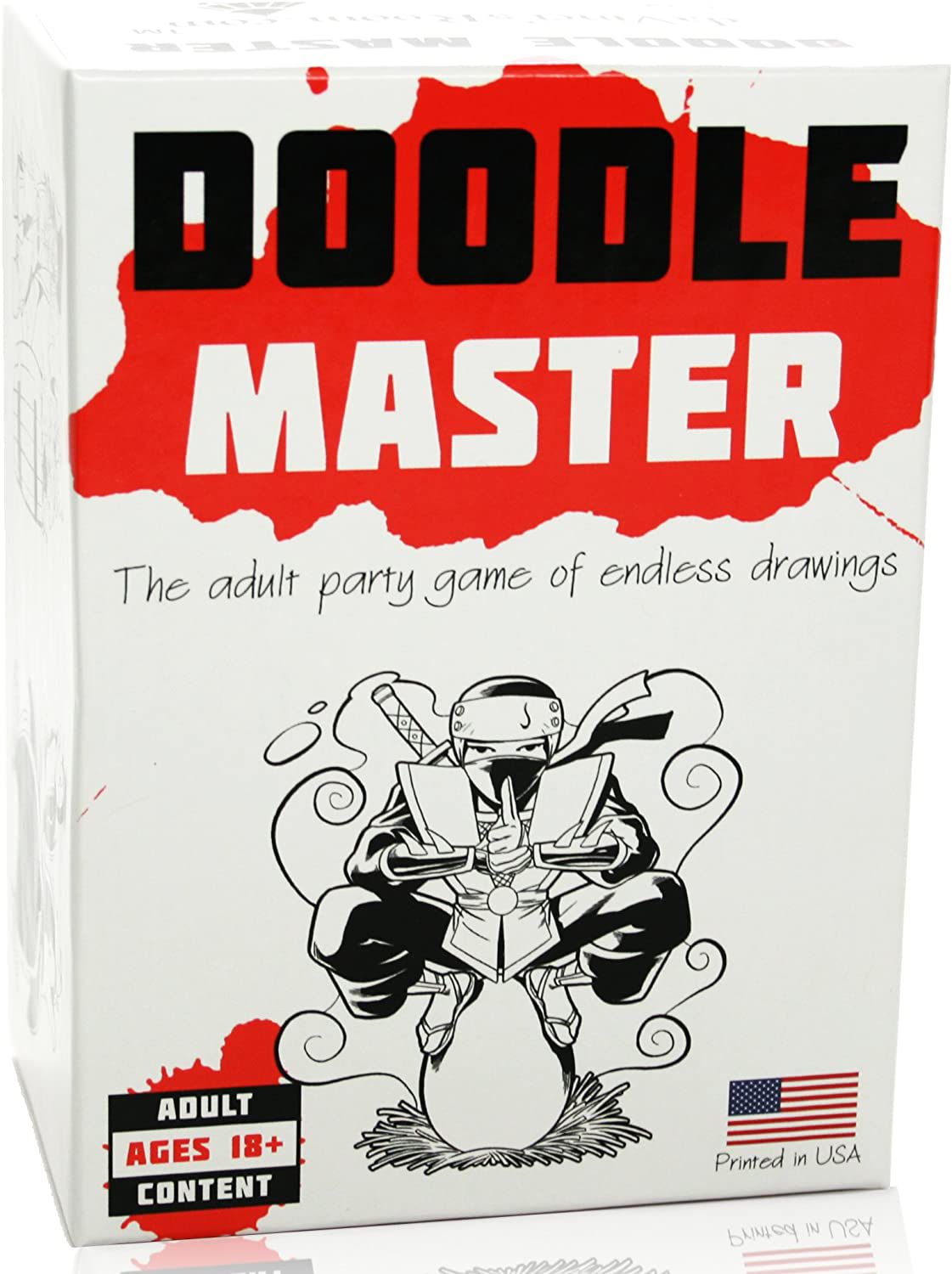 View On Amazon View On Davincisroom.com

Players: Three or more players | Age Range: 18 years and up | Length of Play: Not listed

This game is a bit like Pictionary with an NSFW (or kids!) twist. Players roll the dice, choose both a character and scenario card, and based on the corresponding numbers, will be required to draw a funny or outrageous scenario. The clues are estimated to be about 70 percent "clean" and 30 percent inappropriate.

Examples might include "real estate agent +  twerking" or "penguins + enjoying a fart." You earn points either by drawing pictures that others can identify or by guessing what others have depicted. The game is definitely aimed at the 18 and older crowd thanks to a handful of sexual references—both obvious ones and innuendos. 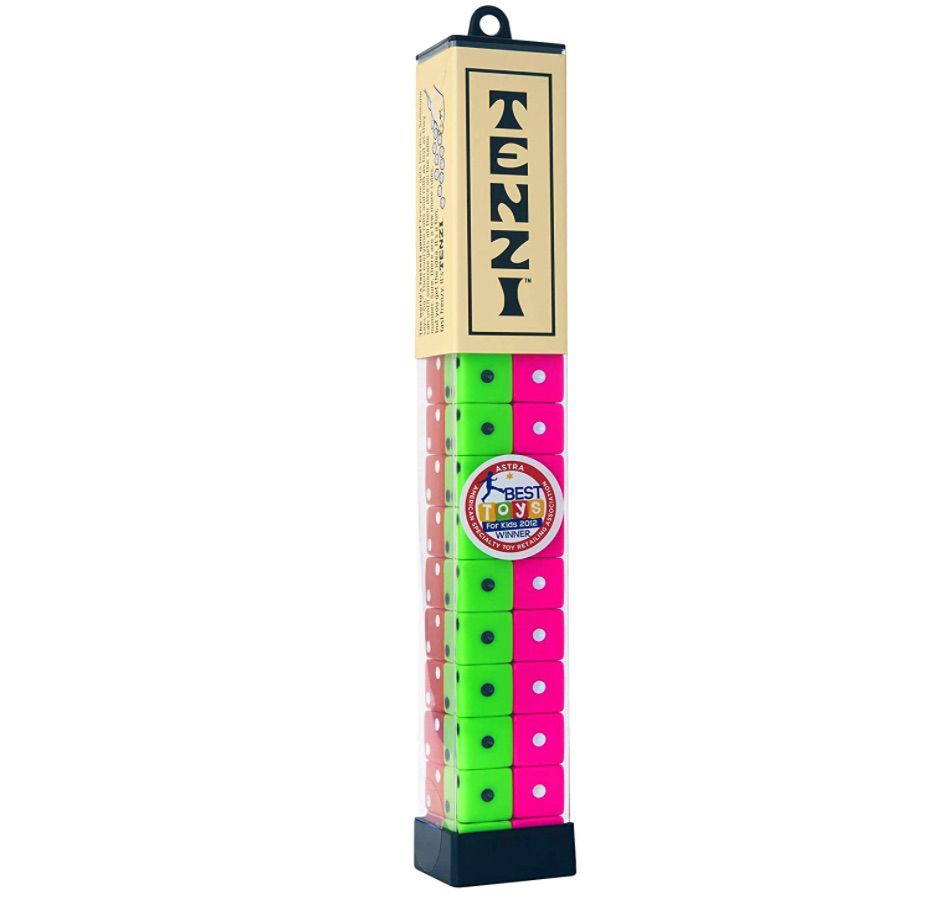 Players: Two to four players | Age Range: 7 years and up | Length of Play: Not listed

There's a reason why teachers love to play Tenzi during math class: It teaches kids to recognize numbers, and it also helps them learn to react quickly. Aimed at children ages 7 and older, the game moves at a rapid pace. Each person gets 10 dice, and the object is to roll them quickly and repeatedly until they all land on the same number (this is called a "Tenzi," and you get to yell it out).

Tenzi is fun for game nights because it's easy to learn and each round goes quickly, making it easy for players to jump in and out. You'll also get instructions for playing nine other variations, and it works best with two to four people. In this version, you'll get four sets of differently colored dice, but you can also buy others separately if you'd like to add more players. 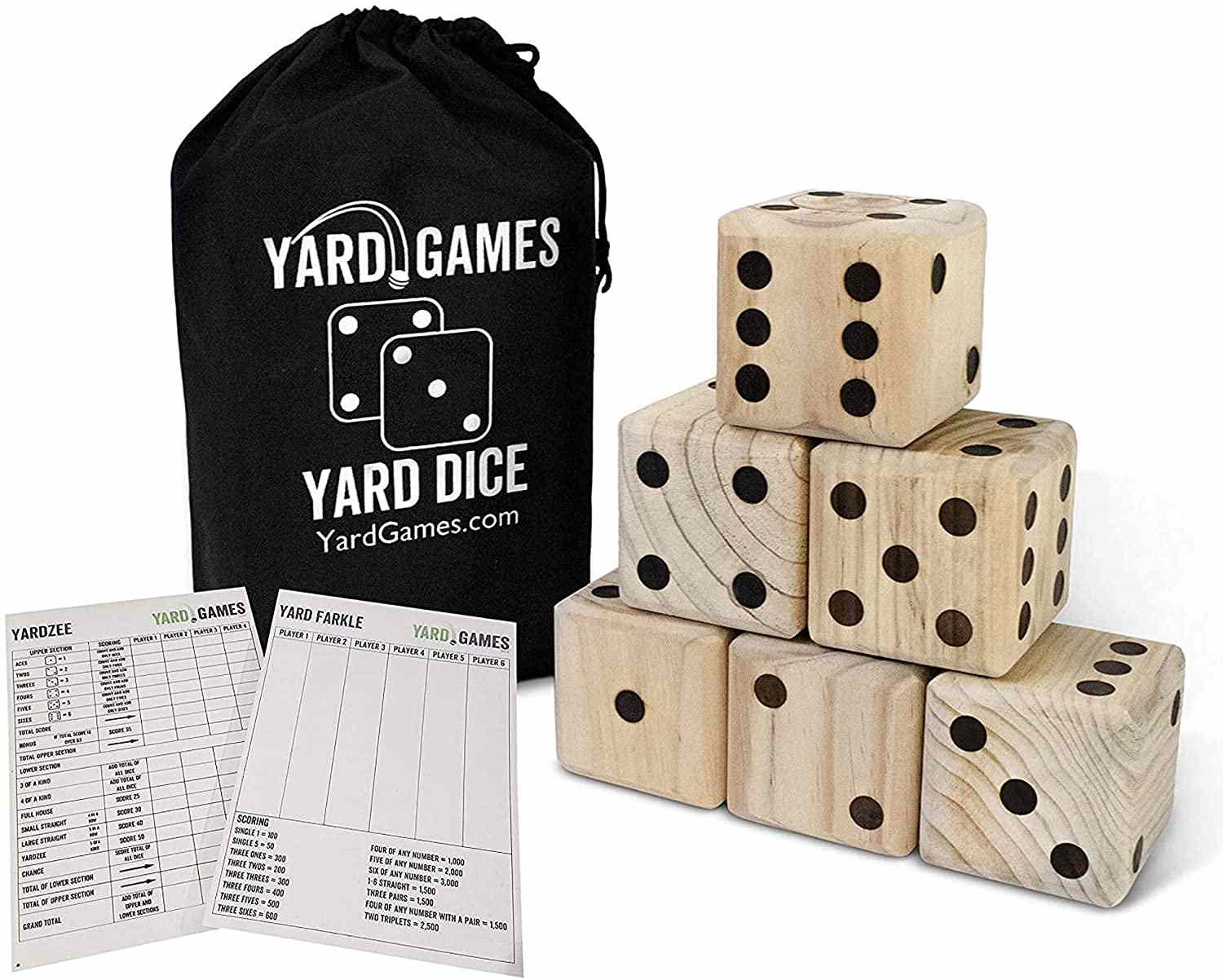 Players: Not listed | Age Range: 8 years and up | Length of Play: Not listed

These 3.5-inch wooden dice won't get lost in the grass, and you can use them to play Yard Farkle and Yardzee. Laminated scorecards for those two are also included, along with instructions for other dice games. The dots (did you know they're also called pips?) have been applied using heat branding, making them durable and visible during play.

The dice are made from sanded but unfinished solid pinewood, but some people add their own protective sealant. They come with a drawstring bag for easy transport and storage, and you'll get six dice total. 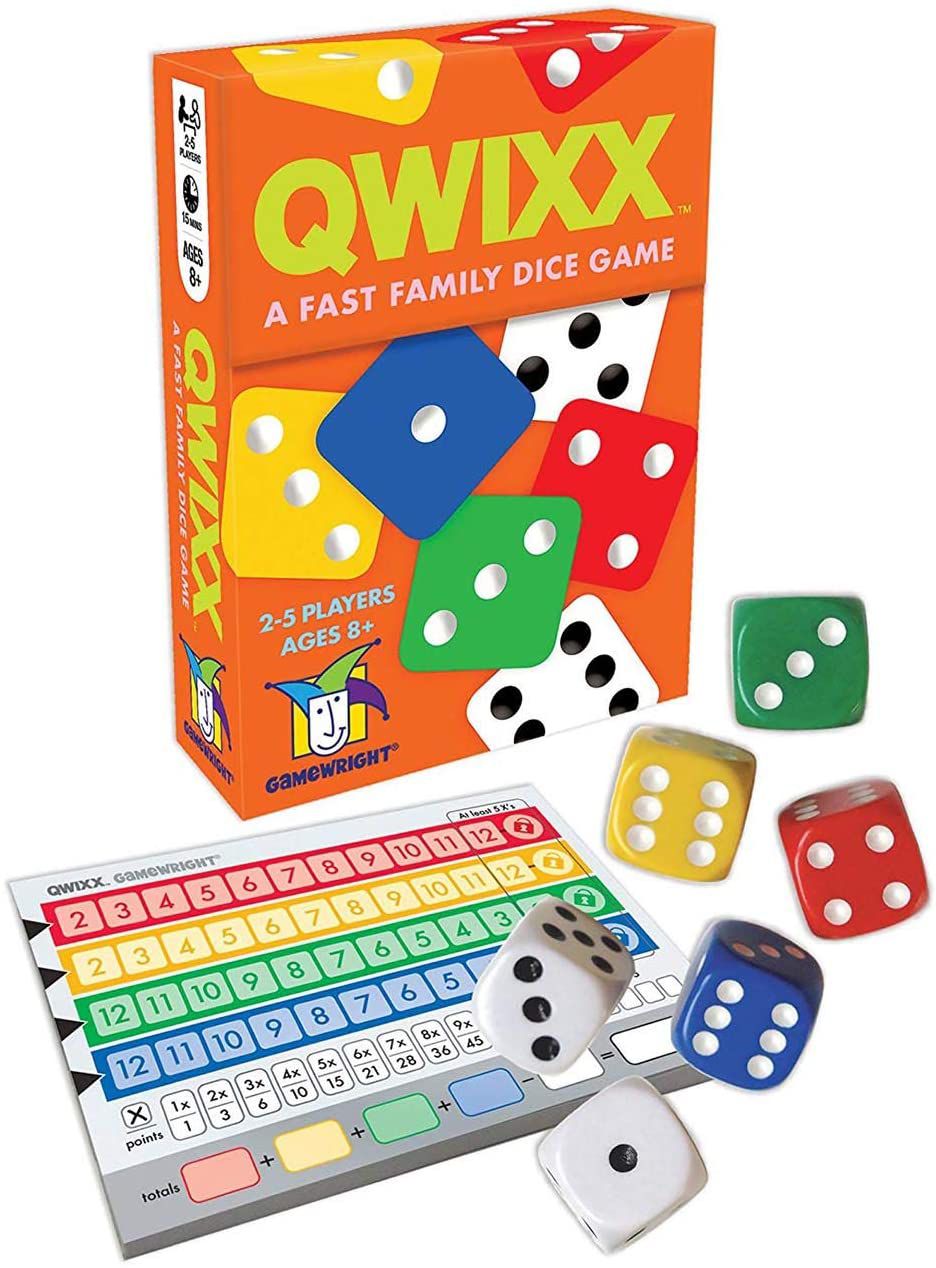 This game is a little bit like Bingo but with dice. All players are involved in all rounds, so there's no waiting around for your turn. As people take turns rolling, everyone gets the chance to cross off numbers from their individual score sheet by quickly adding the numbers on the dice (don't tell your kids, but this also gives them a chance to practice their fast math facts).

As the name suggests, the game moves quickly, and there are specific rules to follow. One is that you can only cross out numbers moving from left to right. Others involve what the active player is allowed to do, such as adding other numbers to the white dice totals. The object is to be the first person to cross off two color rows. The rules might be simple, but the game keeps players engaged—and wanting to play more—because they're forced to take risks and make fast decisions.

Lexi Dwyer has written about board games, card games, and trivia games for The Spruce. She's a huge fan of the adrenaline rush one gets after playing Tenzi and also loves the creative spirit of Rory's Story Cubes.