Fast-paced, portable, and fun decks to liven up game night

Written by
Lexi Dwyer
Lexi Dwyer is a parenting and lifestyle writer for the Spruce. Her work has appeared on digital media outlets like Fatherly, What To Expect, and Today.com
Learn about The Spruce's Editorial Process
Lexi Dwyer

Our Top Picks
Best Strategy:
Exploding Kittens Card Game at Amazon
"While the game may seem complicated, it’s quick and easy for players (seven years old and up) to learn."
Best for Large Families:
Mattel Games Apples to Apples at Amazon
"This hilarious, easy-to-learn game will draw a crowd in no time, and fun variations will keep them there."
Best Strategy:
Jax Sequence at Amazon
"This game offers an alluring combination of luck, variables, stealth, and strategy that will have kids and relatives hooked."
Best for Young Kids:
Mattel Games UNO at Amazon
"This classic color- and number-matching game is easy for kids to pick up and impossible for them to put down."
Best for Families with Teens:
Atlas Games Gloom at Amazon
"Its dark subject matter and storyline-driven gameplay will convince teens to drop their phones and join you."
Best Design:
Asmodee Dixit at Amazon
"This museum-worthy game asks players to make up their own tales, inspired by the illustrations at hand."
Best Conversation Starter:
Skybound Superfight Card Game at Walmart
"Once you master this argument-based game, you can add expansion packs with themes like horror and anime."
Best Grownup-Inspired:
Kids Against Maturity Card Game at Amazon
"The perfect intermediary between Apples to Apples and Cards Against Humanity, this game is a hit among older kids."

Although some card deck games should definitely be labeled NSFFGN (not safe for family game night), there are plenty of options that kids and adults can play together that will guarantee both laughs and bonding time.

The beauty of a card game is that it can also be tossed in a tote bag and pulled out when you've got time on your hands—like during a vacation, at the park, or at home before dinner. There's also a beautiful simplicity to them: Most don't have overly complicated rules, and there's usually no board or game pieces to bother with, so new players (such as younger children) will have a gentle learning curve.

Here, our favorite family card games that are well suited to families with kids of all ages:

This popular, 15-minute game, which is described by its founders as "a highly strategic, kitty-powered version of Russian roulette," has sold millions of copies. How to play? You pick from the draw pile, and if you pull an exploding kitten card you're out, unless you can use another card in your hand to take action. That might mean defusing with a "kitten yoga" card, deploying the "weaponized back hair" card, or playing your "rub the belly of a pig-a-corn" card, which allows you to peek at the top three cards in the pile. Obviously there's a fair amount of luck and chance, but you'll also need to strategize as you figure out which cards to play when, and as the draw pile gets smaller, your chances of pulling an exploding kitten get larger, thus increasing the tension.

There are several expansion packs available, and many families felt they were key to having the most fun, even as a group of four—otherwise the game went too quickly. The game is aimed at players age 7 and older, although younger children will be able to play with a bit of patience and direction. The subject matter is silly rather than overly vulgar, but beware that your kids may be laughing about "portable cheetah butts" and "bat farts" for weeks to come.

"But most people attracted to this game will love the ridiculous drawings of bats farting or cats shaped like hairy potatoes, all in Matthew Inman’s signature humorous style. Our players found the pictures hilarious, and they added a big fun factor to the game. Even the text on the instruction sheet is fun and slightly silly."—Danielle Centoni, Product Tester 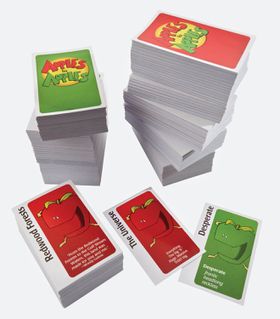 This fun and familiar game can be played with up to 10 people, and chances are that people of all ages quickly grasp the concept. Players take turns being the judge, which little ones will appreciate as it helps balance out the power dynamics. The basic premise: Red cards list nouns (people, places, things, events) and green ones have adjectives. Each player is dealt seven red cards, while the green ones are left as the draw pile. The judge flips over the top green card, and reads it aloud. The other players must then put down the red card that they think fits best with the green one in play. Note that the goal is to wow the judge (you can argue your point), so that might mean picking a combination that you suspect they will appreciate—for example, "glamorous BigFoot" might trump "glamorous supermodel" for the right judge.

If you win a round, you get to keep the green card, and the goal is to rack up a certain number of cards, which based on how many people are playing. The original version is recommended for kids ages 12 and up, but Mattel also makes an Apples to Apples Junior Edition (available on Amazon) for children ages 9 and older, and a Disney-themed version (available on Amazon) for the 7-and-up crowd. Variations in the rule book include "Crab Apples" (choose the word that is least like what's shown on the green card) and "Apple Turnovers" (players get green cards, and the judge reads out a red one). 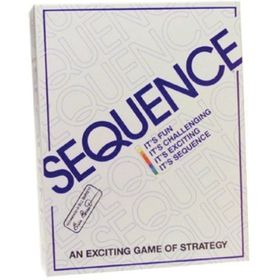 If dominoes and Gin Rummy had a baby, it might look something like this classic game, which has been popular for several decades. The object is to build straight rows of five chips (called sequences). As you do so, you'll need to also block other players and attempt to remove their pieces using certain cards, such as jacks.

With two or three people, Sequence can be played individually, but for larger groups (up to 12), you'll need to divide into teams. The game has an easy point of entry since reading isn't required: It's recommended for children 7 and older, and can help them develop skills such as logical thinking, cooperation, and strategizing. 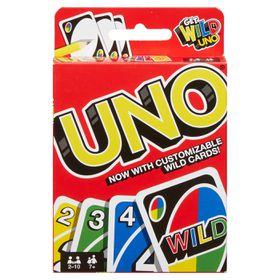 Iconic and perennially beloved, Uno is a game that can be customized for the age and skill level of the players. (Although it's recommended for children 7 and older, this is another game that little siblings might be able to join.) There are many rule variations, and some families even create their own, but the basic outline is simple enough for younger kids to understand.

The object is to rack up 500 points across several rounds, which one can do by getting rid of their cards first, since they'll earn points for whatever cards their opponents are left holding. As they play, kids and parents can discuss the different ways to strategize, and whether it's better to be offensive (trying to get rid of as many cards as possible), or defensive (trying to keep a low value in your hand so a winning player can't score those points).

If your kids don't have the stamina to play to 500 points, simply declare the winner at the end of each short round, which might also be the best strategy if you're playing with sensitive little ones. 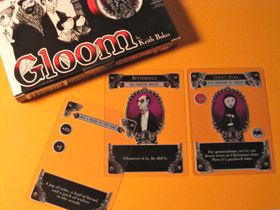 It can be hard enough to get your teens to join you for dinner, let alone an extended family game night, but this quirky, cleverly illustrated option just might be cool enough to lure them off FaceTime. Gloom is storyline-driven and designed for two to four players, and the object is to inflict tragedy (and eventually death) on your own characters, while creating happiness and good cheer for your opponents. Each player is in charge of a family of eccentric types (characters include the Lurking Butler and the Creepy Clown), and the innovative design of the transparent plastic cards means everyone can easily see the score and progression of the game.

The darker subject matter makes it best for older kids (13 and up) or more mature tweens, and each round takes about an hour to play. Not only are there several expansion packs available (such as Unwelcome Guests and Unpleasant Dreams), there are also multiple themed versions of the standalone game, including Gloom in Space and Gloom of Thrones.

9 Best Board Games for College Kids and Young Adults

This gorgeously illustrated game, designed for two to six people, helps spark imaginative storytelling. It works well for players of all ages, although it's technically suggested for children 8 and older. The cards were illustrated by Marie Cardouat, known for her work on games like Steam Park and Marrakech, and have a dreamy, museum-worthy look to them.

In Dixit, a player is asked to make up a tale inspired by the imagery, and the others at the table must try to guess which card they're referencing. Although expansion packs are also available, the game's creator, Jean-Louis Roubira, has said that part of the challenge of the game is to find new and surprising associations even about pictures you've already seen. Some families might even decide to mix things up by creating their own rules, for example, all associations during a given round must be related to a favorite sport, movie, or vacation spot. 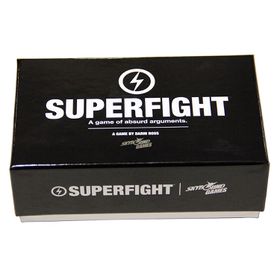 Buy on Walmart Buy on Barnesandnoble.com

Do your children love to argue with you? Now they can channel those feelings with this lively game that's perfect for kids 8 and older. Here's the set-up: The white cards represent characters and the black ones stand in for attributes. Each player picks three of each type and uses a black and a white card to create the character that would be most likely to dominate in a fight. (Examples might include a zombie/with a beard full of bees, Your Mom/throws fireballs, or Abraham Lincoln/armed with the force.)

The fun really starts when each player starts defending their character. The group votes to decide the winner, and if there's a tie, those two players must do a face-off (again, more verbal banter) using only character cards. Although it's a silly premise, parents have said they enjoy how much the game reveals about how their kids think and reason things out. Expansion packs are focused on themes such as horror, 1980s, 1990s, and anime.

Are your kids ready to graduate from Apples to Apples but you don't dare show them Cards Against Humanity? This popular pick, which is heavy on the potty humor, is exactly the right compromise. The structure is similar: Players are each given 10 answer cards, and take turns playing the role of judge, which involves reading the question card and selecting the best answer—which, let's be honest, is usually the worst.

Note that this game is not for the faint of heart: Parents should be prepared for references to things like "tipped-over Port-o-Potty," "turd burglar," and "the kid who wipes boogers under the desk." There are a few innuendos tossed in for the adults, but if you're concerned, you can always opt to edit the deck ahead of time.