Make sure your family and house is protected

Erica Puisis
Erica Puisis writes about home products for The Spruce and specializes in interior design and plant care. She's contributed to Forbes and smart home blogs like Smart Home Solver and TechDigg.
Learn more about The Spruce's Editorial Process 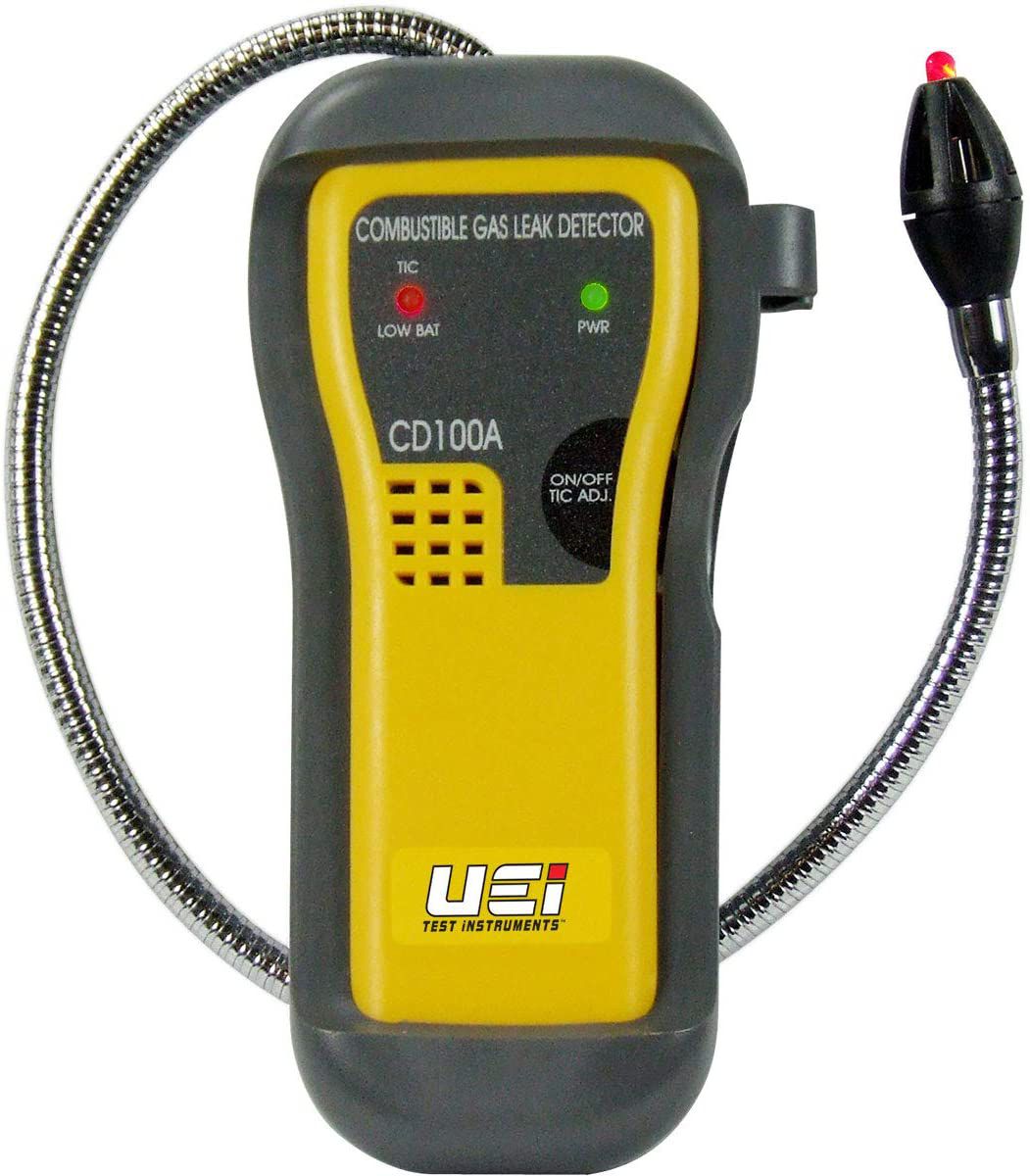 What do buyers say? 88% of 600+ Amazon reviewers rated this product 4 stars or above.

A versatile gas leak detector will assist you in finding leaks from multiple combustible gases, including methane, natural gas, propane, and more. The CD100A Combustible Gas Leak Detector from UEi Test Instruments is a top choice for homeowners looking for a handheld and easily operated device.

The UEi CD100A uses a semiconductor sensor to detect and alert you to any present gases, including combustible gases listed above along with acetone, jet fuel, ammonia, benzene, and butane. The key to using this gas leak detector correctly is letting the unit warm-up before use and then adjusting the sensitivity dial until you hear a steady series of clicks. As you use the 18-inch long probe to check gas lines behind stoves, furnaces, water heaters, dryers, and more, listen for the click rate to rapidly increase. The faster the clicking, the higher the concentration of gas.

This particular model gets a lot of praise for being easy to use and reliable for homeowner use. One reviewer was looking for “a simple, inexpensive, and reasonably rugged device” and said that this model turned out to be all those things. Just keep in mind that this is not a continuous monitoring device and it gives no readout of gas concentration in PPM. Instead, this device excels at what it’s intended for—to indicate the presence of gas leaks or give you peace of mind that none exist. 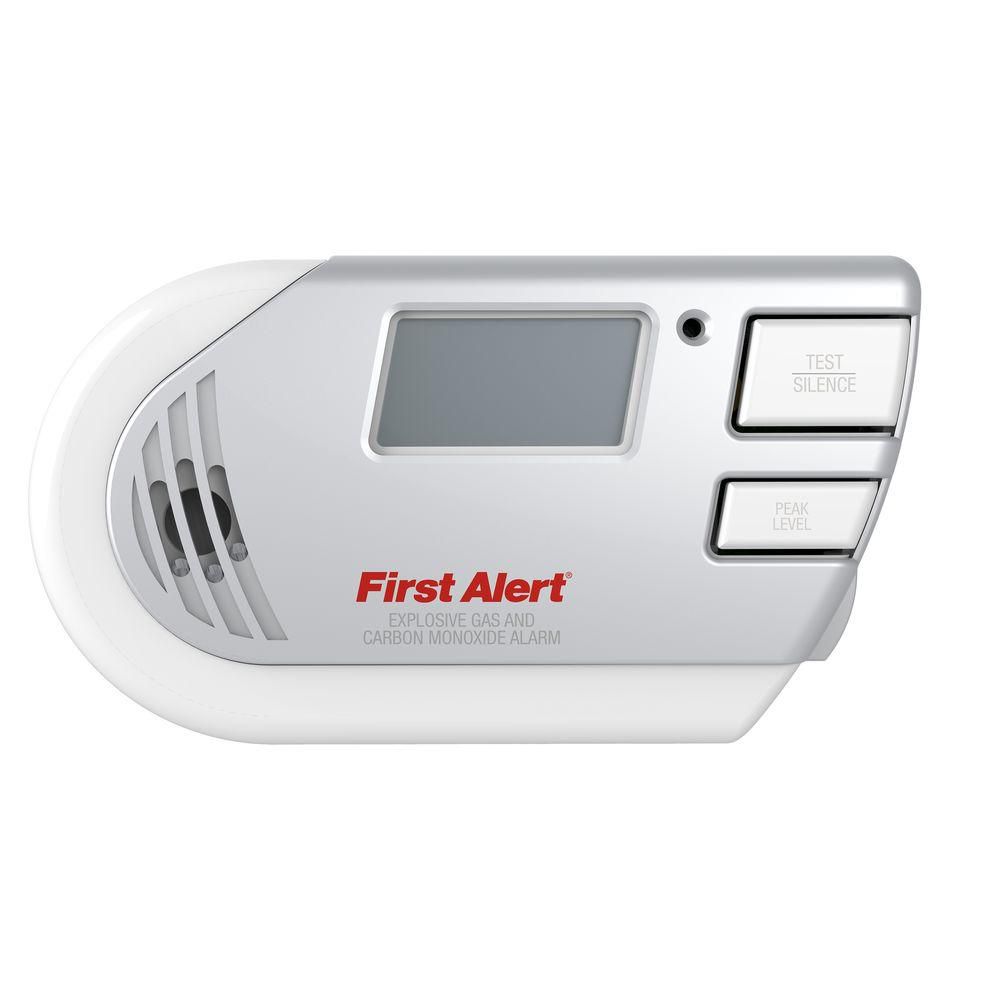 If you’re looking for a plug-in gas leak detector that’s on-duty day and night, consider the First Alert Explosive Gas and Carbon Monoxide Detector. Similar in size and shape to a standard carbon monoxide detector, this model from First Alert is also equipped to detect natural gas or methane, propane, and carbon monoxide.

Plug in this gas leak detector to a standard household outlet, and it will monitor for hazardous gases in your home. A 9V battery back-up ensures that the device will keep on the watch even in the event of a power outage. The digital display will illuminate with the current hazard level when the alarm is activated, or when you push any button. This is an easy way to keep on the watch for serious gas leaks, but several would be needed for adequate coverage of an entire house. While complaints about this unit aren’t common, a few people didn’t appreciate that this plug-in gas leak detector utilizes one outlet but usually blocks the other one from use.

The Best Carbon Monoxide Alarms to Keep You Safe 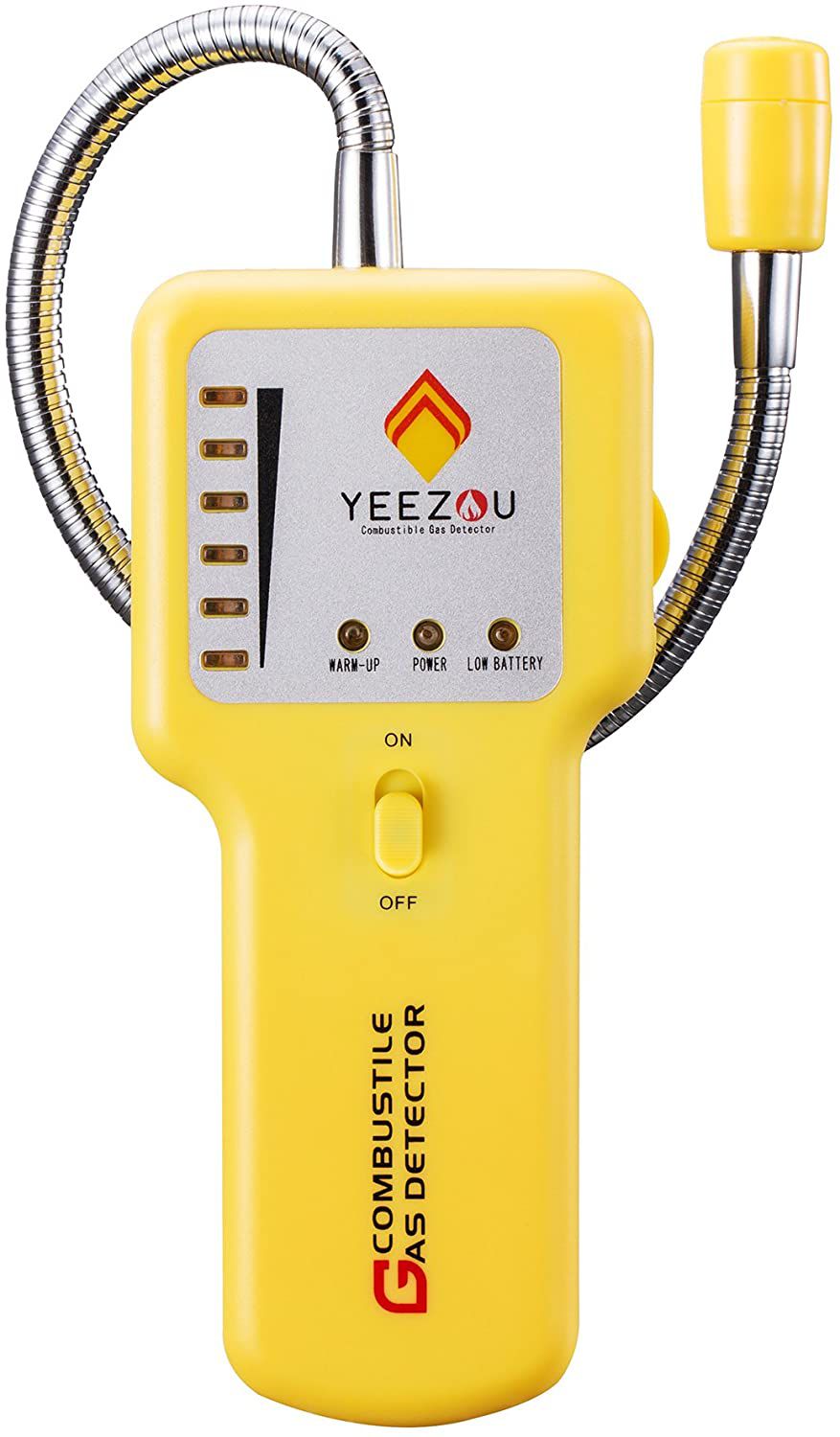 If you want a gas leak detector that fits in the palm of your hand, pick up the Techamor Y201. This is an affordable option for confirming whether there are any leaks present in your home or office space. The device includes a sensor tip for detecting natural gas, methane, propane, gasoline, and other flammable gases.

Like other gas leak detectors equipped with a probe, the Techamor Y201 has a flexible gooseneck to check hard-to-reach areas. It should be noted that this probe is only 12 inches long, while some other models feature 18-inch probes. Even still, most people had no problems using it to access out-of-the-way places. This gas leak detector utilizes three AAA batteries and has an estimated battery life of 20 hours, making it useful for covering even large homes.

Some reviewers expressed frustration adjusting the sensitivity on this handheld leak detector, but others point out that the key is to be carefully read in the included instructions. Once the device is warmed up and sensitivity is adjusted in clean air, you’re ready for leak detection. The Techamor Y201 will alert you to the presence of gas with both audible and visual indicators, thanks to a loud 85-decibel alarm and red LED lights. For a homeowner that needs to know if a gas leak exists and get a relative sense of how strong it is, this handheld gas leak detector is a good device to have on hand.

Ensuring that there’s no combustible gas leaks on a work site is an important part of safety and eliminates unnecessary fire risk. Contractors often carry a heavy duty gas leak detector to check for leaks from pipes and fixtures. The Ridgid CD-100 is a well-built device that will offer reliable service for contractors in the field or at home. One key feature of this gas leak detector for contractors is the fact that the sensor can be easily replaced, adding to the usable lifespan of this device.

The Ridgid features sturdy, rugged housing with five soft press buttons to control operation. A 16-inch flex probe enables you to position the sensor near suspected leak sources, while a five bar LED display provides an indicator of the presence of gas. One thing that makes this gas leak detector for contractors stand out is the fact that it provides a three-way alert to the presence of gas—an audible alarm, visual LED reading, and tactical vibration. On a loud worksite, the addition of a vibrating indicator ensures that any alert to the presence of gas isn’t overlooked or drowned out by ambient noises. 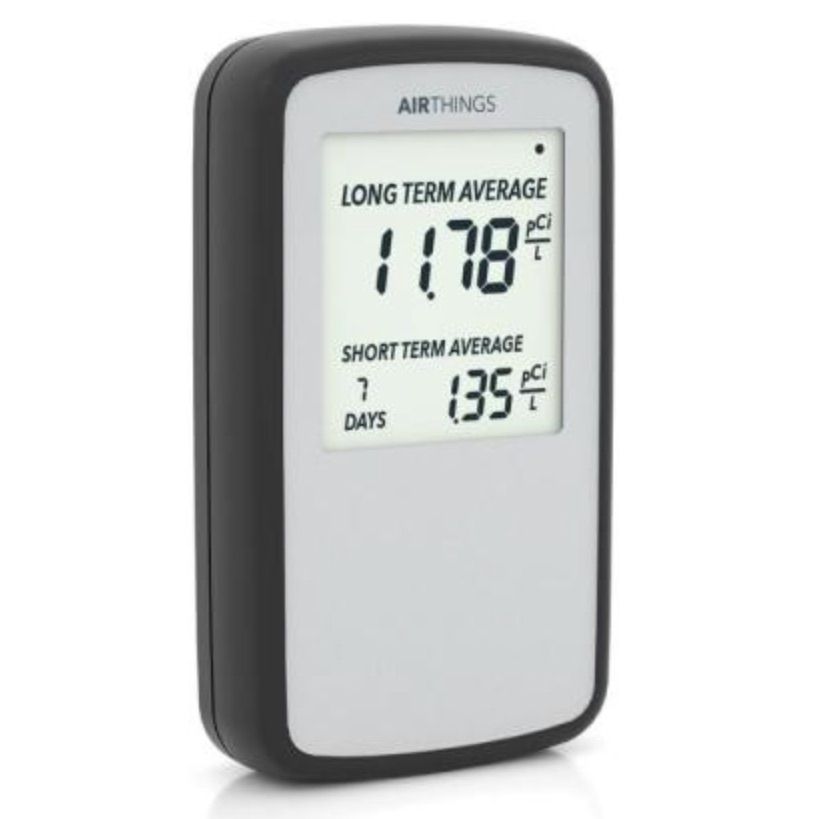 Radon is a naturally occurring radioactive gas that can leak into homes through cracks in the foundation, loose-fitting pipes, floor-wall joints, and other entry points. To keep tabs on radon levels and ensure they’re within safe limits, consider a radon gas leak detection device like this model from Corentium.

The Corentium Home Radon Detector is a compact device with a digital display that provides an initial radon reading in 24 hours. From that point forward, the device will track and display radon averages for the last day or week, along with a long-term average for comparison purposes. While some people felt the device had some inconsistencies, most people agreed that its readings are a useful way to keep tabs on the level of radon gas leaking into your home, especially over a period of time. It also provides faster insights than conventional radon tests that are conducted by mail. 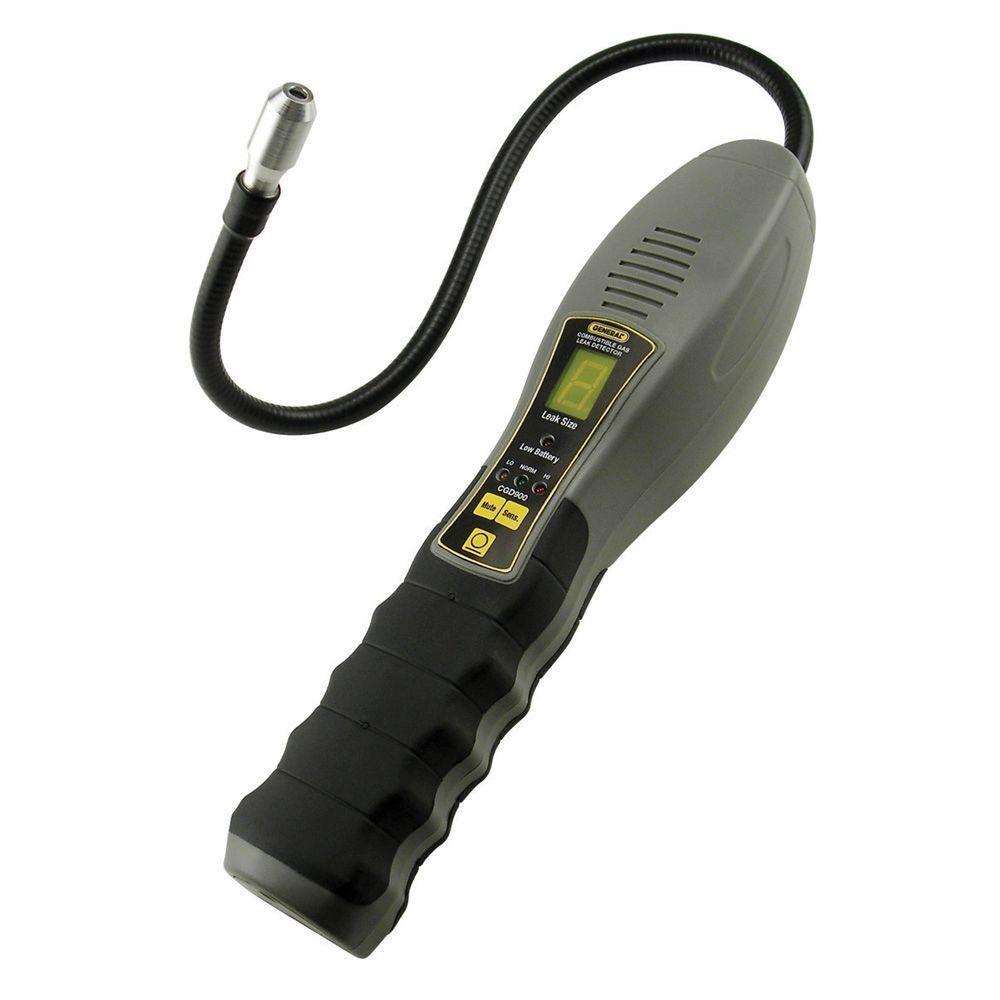 The Mine Safety and Health Administration (MSHA) sets forth operating standards for devices used in potentially explosive closed mining areas, and such devices must be labeled as "intrinsically safe". The General Tools CGD900 is an intrinsically safe gas leak detector that’s commonly seen in industrial and mining applications but offers useful features and benefits to anyone.

The CGD900 does its work with heat-sensor technology designed to detect harmful levels of the majority of combustible gases, such as methane, propane, butane, acetylene, and alcohol and gasoline vapors. In addition to an audible alarm indicating the presence of a gas leak, the unit has a digital display with a reading from 1 to 9, which indicates the relative size of the leak. Keep in mind that the digital display isn’t a read-out of the amount of gas present but is useful for determining whether a leak is of a minor or major nature. The device’s sensor is located at the tip of a 17-inch flexible probe, so it’s easy to use this intrinsically safe gas leak detector even in tight spaces.

"Probably the most important features are the gases detected and that the sensor has been certified by a nationally recognized testing laboratory. This should provide more assurance that the device will actually do what it is supposed to."—Brian Metzger, Fire Protection Engineer, United States Fire Administration

Campers, motorhomes, travel trailers, and other RVs rely on propane for basic operations like heating and cooking. But having a propane source in an enclosed space can be a hazard if a leak occurs. To keep tabs on the situation, your RV should be equipped with a propane gas leak detector, like this model from MTI Industries.

The MTI Propane Gas Alarm is a popular pick for RV enthusiasts who are replacing expired or defective leak detectors for their campers or motorhome. People report that the device offers simple installation and typically mounts easily into the space left by a former leak detector.

"The most common cause of gas leaks in the home is a faulty gas line or appliances such as a furnace or water heater. Portable appliances like generators and grills, as well as motor vehicles, can also be a source of toxic gases in the home. It is important to maintain and operate all appliances as they were intended to be operated."—Brian Metzger, Fire Protection Engineer, United States Fire Administration 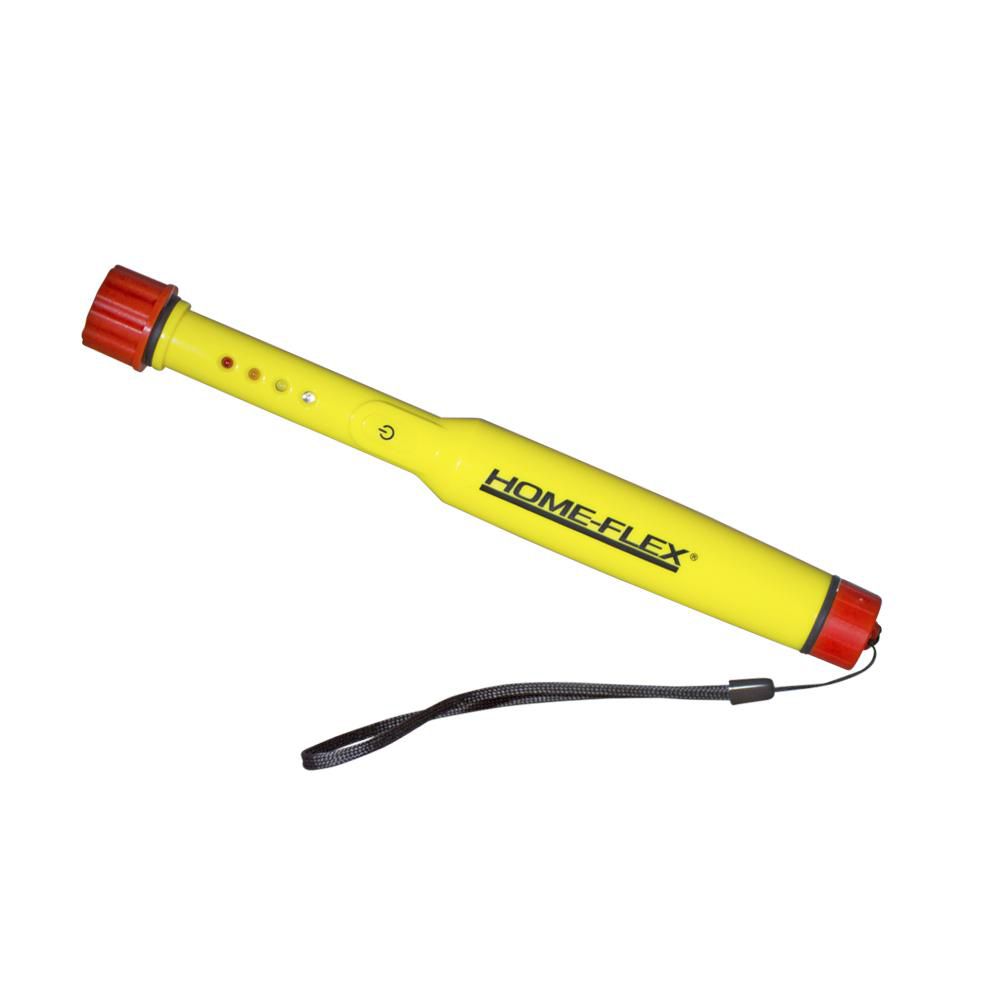 While safety is not something you should put a price on, it’s helpful to know what your affordable options for a gas leak detector include. For under $30, you can pick up a pen-style gas leak detector that is easy to use and can detect the presence of natural gas, liquid propane, butane, and methane. While this is more limited in scope than some higher-powered gas leak detectors, it can help to detect some of the most common household gases.

The Home-Flex Electronic Gas Leak Detector features a sensor at its tip, protected by a cap when not in use. Don’t forget to remove the cap before attempting to use the gas leak detector for more accurate results. The device runs on just two AA batteries and it’s small enough to slip inside a drawer or keep in your toolbox. Many users have found these gas leak detectors to be a quicker way to find small gas leaks than using the conventional soap bubble detection method. One reviewer summed up this device by pointing out that its value is in detecting minor leaks you may not be able to smell with your nose that could quickly turn to a major problem.

What to Look for in Gas Leak Detectors

Different products are designed to sense the presence of specific gases in the air. For home use, most people opt for a device that monitors for either natural gas or carbon monoxide. However, if you want to cover all your bases, some detectors provide more comprehensive protection, monitoring for all of the most common combustible gases.

"Some devices are capable of detecting multiple gases," says Metzger. "Examples of common toxic gases that can be present in a home are Radon and Carbon Monoxide (CO). A common combustible gas would be natural gas, which is primarily methane."

There are several styles of gas leak detectors, ranging from handheld units to plug-in alarms and even simple liquid sprays. If you want to monitor for gas leaks 24/7, you’re probably better off with an alarm-style unit that’s similar to a smoke detector. However, if you just want to check for gases periodically, a handheld unit or spray might do the trick.

You should also consider the sensitivity of your gas leak detector, measured in ppm or parts per million. Why does this matter? Consider this: Prolonged exposure to carbon monoxide can be harmful at just 10-24 ppm. If your detector doesn’t sense the gas until the concentration reaches 50 ppm, your family could be breathing in this toxic gas for quite some time before the sensor alerts you.