Get to work ASAP with these essential tools

Written by
Austin Fracchia
Austin Fracchia is a writer specializing in home design, DIY projects, and technology. He has written for Best Reviews, TechDigg, Wikimotive, and more.
Learn about The Spruce's Editorial Process
Austin Fracchia 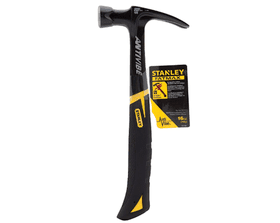 Stanley is a big name among tool manufacturers, so it's only natural that their 51-163 16-Ounce FatMax Xtreme takes the top spot for good hammers to buy. This one goes beyond what most hammers offer in design and build. While it easily can drive nails into hard and thick woods with its 16-ounce, all-steel construction, it does it in a way that is meant to protect the user.

Hammering repeatedly can lead to many problems with hands and wrists over time. The vibrations of each impact can stress the bones and tendons holding everything together. If you will be using a hammer a lot, this one minimizes the dangers by absorbing most of the impact of each strike. The handle is also designed to reduce the torque placed on the wrists and elbows as you swing.

Buy on Amazon Buy on Home Depot Buy on Walmart

The toughest hammer isn't always the best for some projects. If you are looking for a versatile hammer to use for more delicate projects, the Tekton 30812 Double-Faced Soft Mallet will get the job done. The dual soft faces are better for hitting surfaces you don't want to damage as you apply a lot of force to each strike. This is perfect for protecting fragile surfaces or completed finishes while you hammer.

The body of the hammer is meant to keep the whole tool light if you need something that you can comfortably carry and use for long periods of time. The shaft and handle are made of tubular steel, which reduces the overall weight of the tool. The soft, rubber grip will also keep the hammer comfortably planted in your hands while you swing and strike.

Sometimes, finding a good hammer is a matter of personal preference. For some people, nothing can quite compare to the feel and weight of a wooden handle. Wood is old school tech, but with hammers like the Stanley 51-106, it still has a lot to offer. Wood is a great choice when you want a hammer that you can shape to your hand. It offers a level of ergonomic customization that metal and rubber simply can’t match.

Like other wood handles, the 51-106 will change to fit your grip the more you use it as the wood slowly wears over time. Don’t worry, this is natural and rarely compromises the overall strength of the hammer. The wood is heat treated and polished to a visual shine to increase its overall strength. The shaft is also tempered in its weak spots to reduce the possibility of chipping and splitting the wood as you strike.

Rubber handles have become more popular over the years as more people have wanted a comfortable grip with the strength of hardened steel. The IIT 32380 12 Oz Stubby is meant for light-duty projects where you will find yourself hammering for hours on end. The lightweight, ergonomic handle is covered in a soft rubber comfort-grip that will work for both right and left handed individuals.

This hammer falls right in between heavy and light options. The steel head is strong enough to survive repeated abuse for long projects, while the weight is convenient for the times you need a little extra force in your swing. At eight inches in length, it is also a perfect size for carrying around on your toolbelt when not in use.

For hammers, the weight will often influence how much force you can put down on a nail. As a result, this also affects how tough of a surface you can hammer. Lightweight hammers like the Maxcraft 60626 8-Ounce are perfect when your project involves lighter or softer woods. At 8 ounces, this hammer is small and light enough to comfortably carry in your hands. To eliminate fatigue on your hand, the weight and contoured handle grip will feel great for hours.

The head is also magnetic to help you start the nail as you hammer. For one-handed use, simply attach the head of the nail to the hammer and swing down.

On the opposite end of the weight spectrum are the heavy hitters. Hammers that forget about shedding the ounces are the tools of choice when you need to drive a nail through tricky wood or even soft metals. The Estwing T3-18 will give you 18 ounces to play with when you want extra force and durability behind your swing.

Despite the size and weight, this hammer comes with shock reduction grip to minimize the amount of shock and vibration your wrists absorb after a strike. This type of design tries to keep the shock in the hammer, so your bones and ligaments don't take the brunt of the force. The hammer is properly weighted between the head and claw, which is forged directly with the handle as one piece for a well-balanced feel in your grip.

A club-style hammer offers the most weight and strike force for people who need something just short of a sledge hammer. They tend to be heavy, long and the tool of choice when the nail refuses to go into the wood. The Stanley FMHT56009 Fatmax earns its name, coming in at four pounds and 12 inches long. The handle length will give you some extra leverage in your swing while also allowing you to use both hands for more strength and stability.

The fiberglass construction tries to find a happy medium between the durability of metal and flexibility of wood. The material is strong enough to resist strikes that would shatter other hammer shafts. At the same time, it is light enough to keep the Fatmax from being too heavy to comfortably use for long projects.

Want a good hammer that is more versatile than just driving nails into wood? A good claw, the rear end that lets you remove things like nails and damaged screws, can be a useful addition for projects that require some deconstruction. The Craftsman 18-Ounce Flex Claw takes the traditional hammer claw to the next level by adding a solid pivot point for a degree of adjustability. Since you may find nails in surfaces at different, uncomfortable angles, an adjustable claw can move to provide you the best angle to pull a nail out.

The claw locks at four different positions, so you can quickly set the rear end to the desired angle as you work. For hammering, this tool also includes a large striking face and a weighty 18-ounce for a solid swing and impact with each stroke.