What to Buy Toy Reviews Gifts for Kids

Exercise their imagination with their favorite movie toys

Written by
Julie Evans
Julie Evans is a writer and editor who has worked with a host of diverse companies including Microsoft, USA Today, Realtor.com, Brit + Co, CafeMom and SheKnows among others. She reviews toys and home improvement products for The Spruce.
Learn about The Spruce's Editorial Process
Julie Evans

If there’s one thing a wizard needs, it’s a wand. This one is a recreation of the famous wand of Harry himself. Magic happens when you wave it, and a light goes on. Another wave of the wand, and voila! the light goes out. Kids can amaze and entertain their friends and family with these powers. Who knows what other magic they’ll be able to make with it as well?

The wand measures 14" in length, and it’s officially authorized by Warner Brothers, so you know it’s the real deal. It runs on two AAA batteries and comes in a fun box that can be used to store it when it’s not being used for magic. 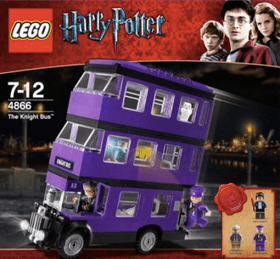 Harry Potter plus Legos — what could be better for little wizards who like to build? This Lego Kit lets kids build their own purple triple-decker Knight Bus. There are 281 pieces in all, and it comes with mini figures including Harry Potter, Stan Shunpike and Ernie Prang, the driver. A shrunken head and Hedwig the owl are also included. Customers who have purchased it love the little details like a dangling chandelier and a bed that slides when you move the truck.

It’s recommended for kids 7 to 12 and will keep them busy for awhile, both building it with all those purple bricks and then playing with the bus when it’s finished.

This set of figurines from the Harry Potter series will fuel hours of creative fun and take kids straight into the magical world of Hogwarts and beyond. It comes with 20 figurines in all and includes everyone from Harry Potter himself to Ron, Hermione, Dumbledore and even Voldemort (He-Who-Must-Not-Be-Named).

Each figurine is about 1.65" tall, made of die-cast metal and is perched on top of a sturdy base. They’re perfect for all sorts of magical make-believe and customers rave about their realistic details. While they’re recommended for ages 3 and up, older kids and adults are likely to love collecting them too. 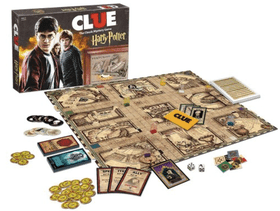 Harry Potter meets the classic Clue board game for magical mystery in this fun board game. Instead of finding out who has been killed as in the traditional game, it’s the players’ job to find a student who has disappeared from Hogwarts. Choose your character — Harry, Ron, Hermione, Ginny, Luna or Neville — then move around the board trying to uncover who made the student disappear, which spell they used and just where the student is being held. Once a player has a guess, they take it to Dumbledore’s office to see if they’re right.

It’s not as easy as it may seem though, as moving wheels on the board bring up secret passages, moving staircases and even (dun, dun, dun), the Dark Mark. The game is recommended for ages nine and up, and you need three people to play. It’s a great addition to game night for fans of Clue and Harry Potter or anyone who likes to solve a good mystery.

For all the angsty, passionate, magical musings of a teen, this Harry Potter journal is just the thing. It can be used to record their innermost thoughts and magical journeys of their own.

While it contains some amazing images from the Harry Potter films to feed the imagination and fuel inspiration, there are also 192 lined pages that are just waiting for them to fill with their own magic. From sketches to quotes, spells and more, they can record anything they want. There are four journals to choose from — Gryffindor, Slytherin, Hogwarts and Deathly Hallows — choose the one that best suits them, or they can aim to collect all four. The journal comes with a ribbon placeholder, an elastic tie to keep it closed and pocket in the back to keep pictures, notes or anything else.

This fun game puts Harry Potter fans to the test — just how much do they know about their favorite series? There are 1,000 trivia cards included, and they the feature pictures from the movies as well to make playing extra entertaining. Questions cover everything from characters and creatures to the places where the magic happens.

Three to six players can play at a time, and the recommended age for the game is three and up. Pretty much anyone who has read the books or watched the movies can play. The questions vary in difficulty, and there’s sure to be something to stump even the most ardent fans. Bragging rights are at stake with each game.

Let the magic start early for the tiniest of tots with this gorgeous plush owl that looks an awful lot like Hedwig, Harry’s beloved owl. Soft and fluffy in a snowy white, the owl stands 13" high and features elegant black markings and willowy wings.

Recommended for ages 3 months and up, this charming owl will be a hit with fans of all ages. It’s the perfect way to introduce little ones to Harry Potter and the wizarding world and let them create magical scenarios with an owl of their own.

Potterheads and gamers rave about this role-playing video game that takes players into scenes from the pages of the third book in the series: Prisoner of Azkaban. Players can immerse themselves in the wizarding world and play as Harry, Ron or Hermione, while using each character’s individual skills and abilities as they fly about Hogwarts to try to battle evil forces and win the game.

It’s a not as easy as waving a wand, however. They'll have to dodge the Dementors and use spells to maneuver the magical challenges and take evil down. It’s rated “E” for everyone and is available for various gaming platforms.