Loosen or tighten nuts and bolts quickly and easily

Michelle Ullman
Michelle Ullman is a home decor expert and product reviewer for home and garden products. She’s currently the commerce editor for home improvement and tools on The Spruce. She has been writing about home decor for over 10 years for publications like BobVila.com and Better Homes & Gardens, among others.
Learn more about The Spruce's Editorial Process

If you spend much time on auto repair or DIY projects that involve repetitive tightening or loosening of nuts and bolts, you likely know how tiring those movements can be to your hands and wrists. The solution? An impact wrench, which is a handheld tool designed to make quick work of the task, sparing you a great deal of strain.

Impact wrenches deliver tremendous torque—turning power—along with bursts of extra hammer-like impact. That means that even rusted, oversize, or difficult-to-turn nuts and bolts don't stand a chance against these powerful tools. They are especially useful for tightening or loosening lug nuts; a 1/2-inch impact wrench is a mainstay in the tool collection of anyone who does a lot of work on cars.

As with many power tools, there are corded and cordless models of impact wrenches, as well as tools powered by air. Most DIYers, hobbyist mechanics, and homeowners prefer the cordless versions, but you'll get more power with a corded tool, and the maximum power from a pneumatic impact wrench, although those are generally used in auto shops, not in homes.

When choosing an impact wrench, you'll want to consider the amount of torque it has, the speed at which it turns, and the number of extra impacts it delivers during use—2,000 to 3,000 impacts-per-minute is typical.

Here are the best impact wrenches across a variety of categories. 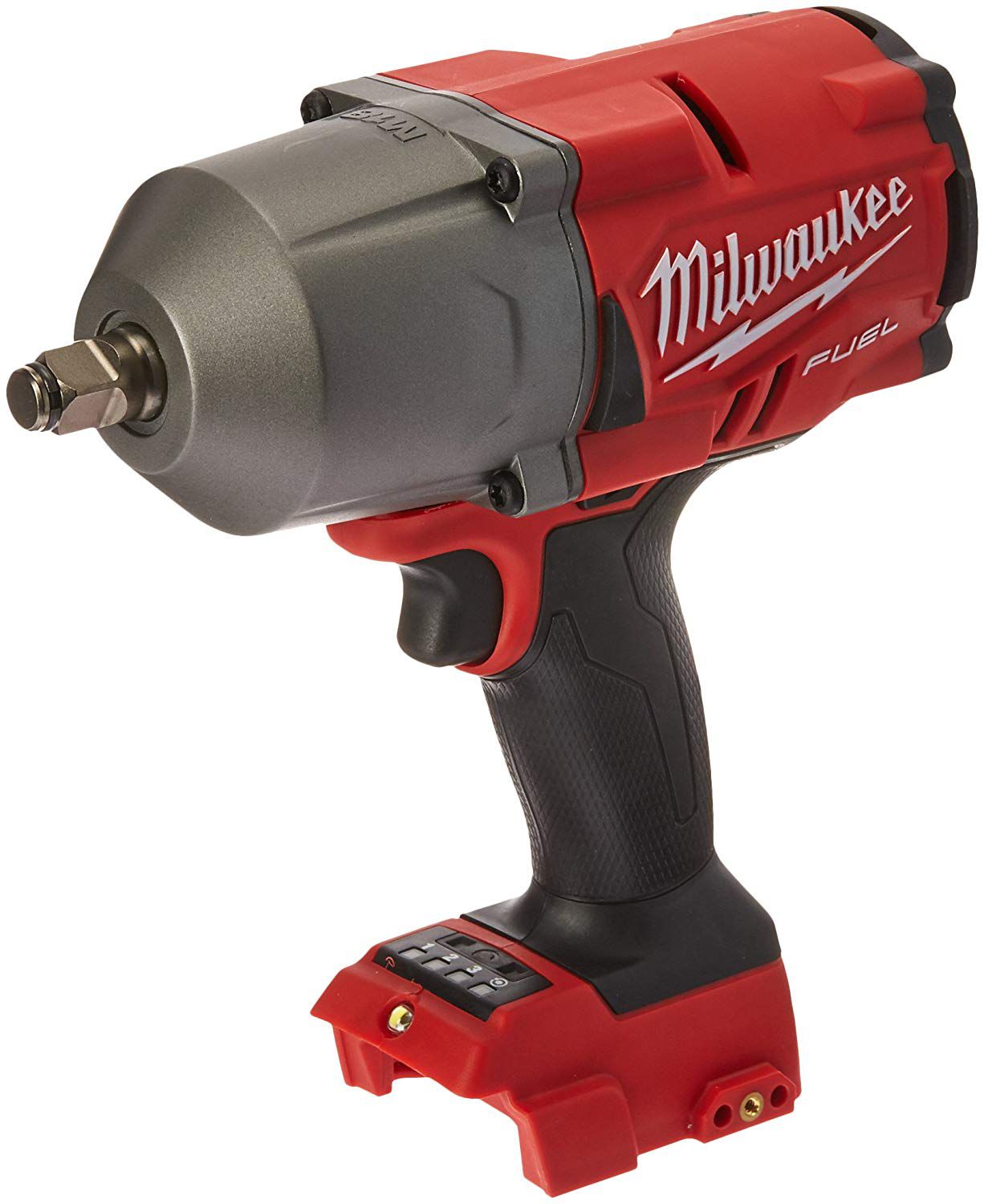 From assembling the patio furniture to removing stubborn lug nuts on vehicles, the Milwaukee Fuel High Torque 1/2-Inch Impact Wrench can handle almost any job. The cordless high torque wrench has a four-mode drive control with bolt removal that makes it a stellar choice for serious weekend warriors. You'll appreciate the L-shaped handle with rubber over mold that offers a comfortable grip while plowing through lengthy jobs.

The tool is just over 8 inches in length and has a bright LED light that covers a wide swath of work area. The friction ring cuts back on difficult socket changes, and the Redlink Plus intelligence prevents the tool from overheating or overloading and damaging the many moving parts. It is one of the more powerful wrenches on the market for its size and has 1,000 foot-pounds of fastening torque and 1,400 ft-lb of nut-busting force. 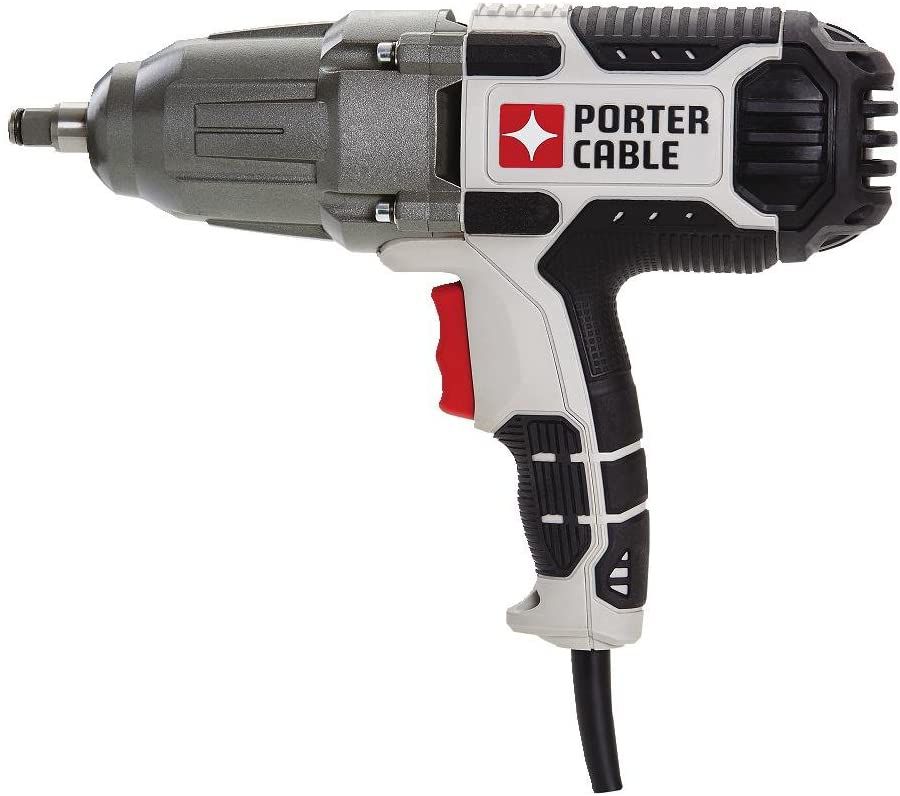 Just because a tool isn't expensive doesn't necessarily have to mean it's low on power or performance. PORTER-CABLE makes a powerful line of tools, and they are affordable to boot. The tool company’s PCE211 7.5-amp ½-inch impact wrench is one of the better reviewed models on the market. It has 450 ft-lb of torque with 2,200 rpm, so you're not sacrificing anything with this impact wrench. The forward-and-reverse rocker switch is easy to manipulate with one hand, and the grip is comfortable to hold. This is an ideal tool for removing lug nuts on commercial vehicles as well as quickly changing out nuts and bolts on lightweight items such as furniture, shelving, and door hinges. 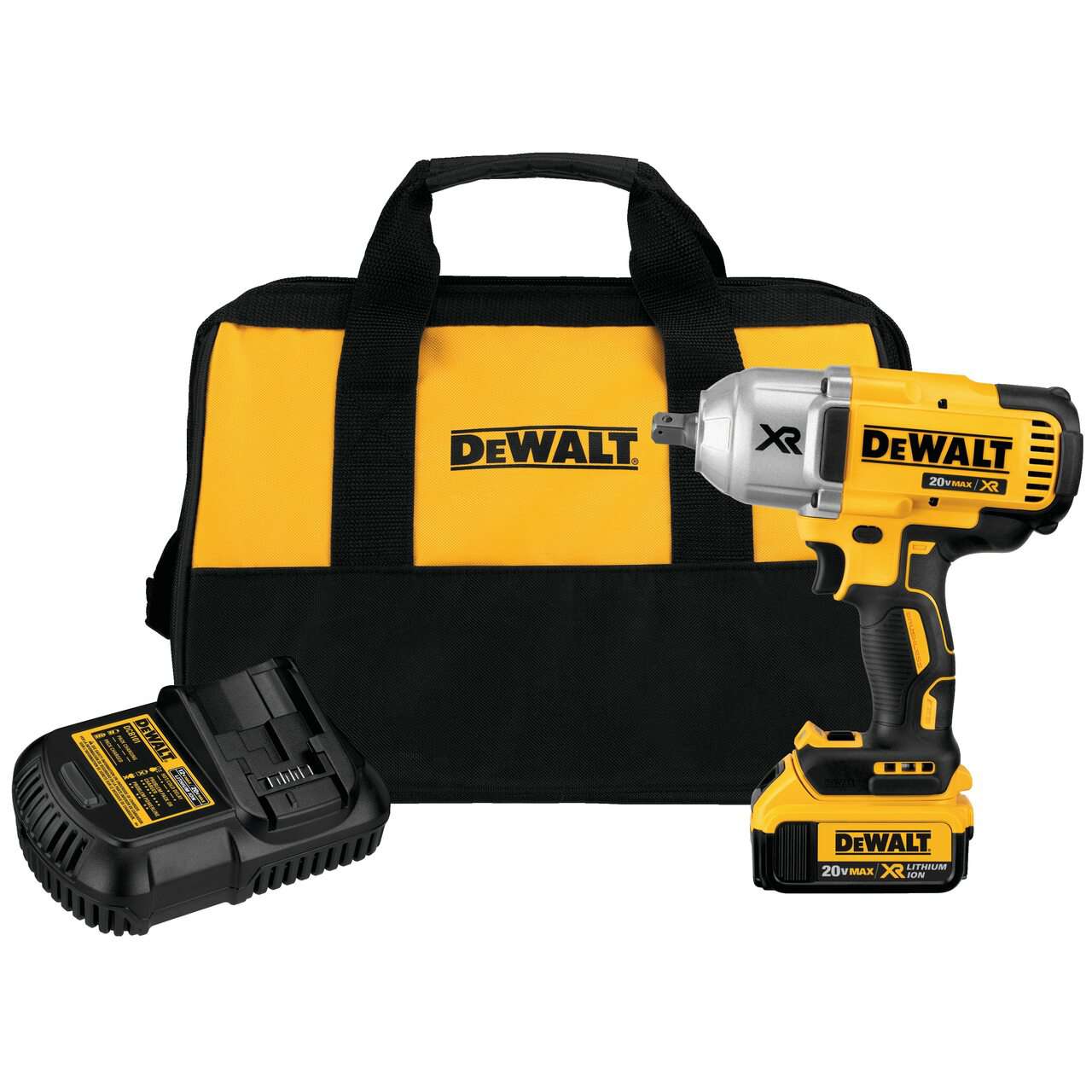 For those just starting out or who want to buy an all-inclusive starter package that includes the battery, charger, and carrying bag, this wrench kit deserves attention. Designed for comfort and power, the DEWALT DCF899M1 20V Max XR Brushless High-Torque Wrench Kit packs a punch. And it has all the high-end features that you would want in a wrench kit.

With up to 700 ft-lb of fastening torque, 1,200 ft-lb of nut-busting force, and 2,400 impacts per minute, the DEWALT kit is powerful. It is small and lightweight, measuring just 8-13/16 inches and weighing in at 7.2 pounds. The impact wrench is versatile with multi-speed control to be used in a wide range of odd jobs. It has a bright LED light with a 20-second delay for tight, dark spots and a half-inch anvil with detent pin. 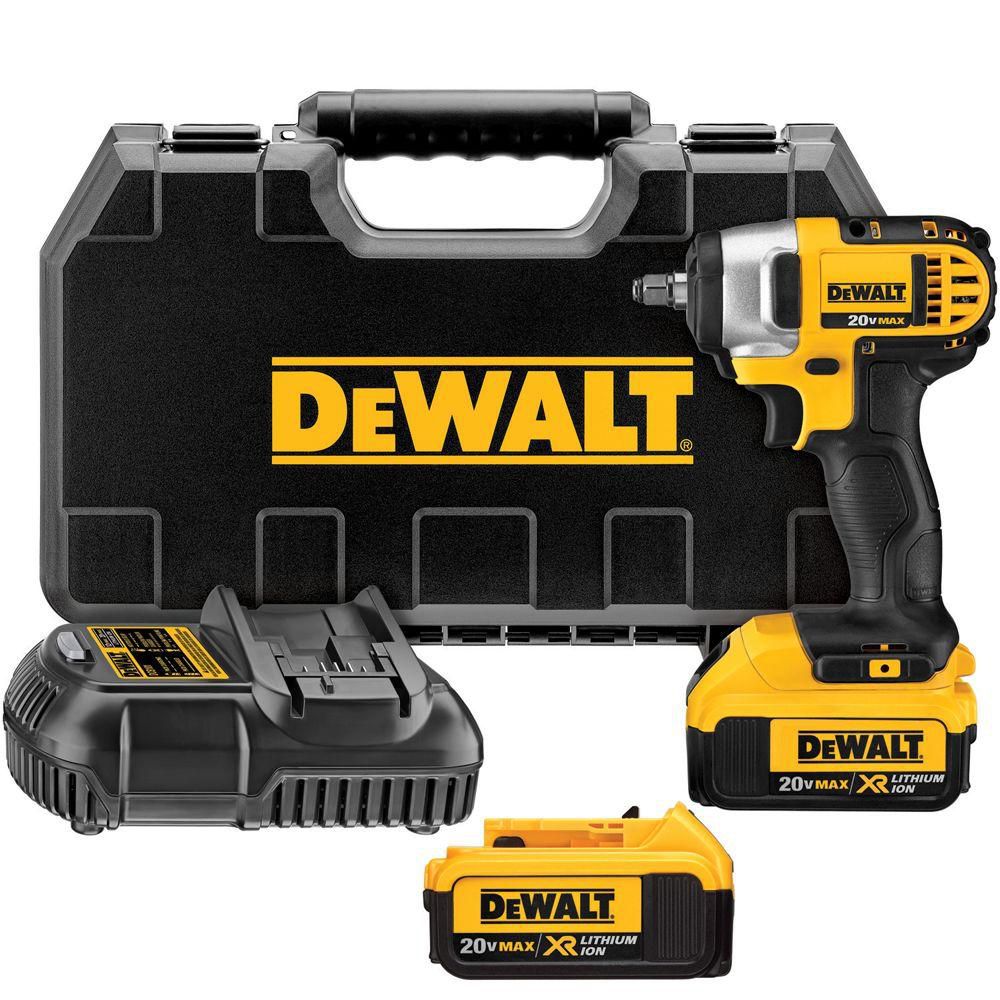 For jobs that require power but no fuss, the DEWALT 20-Volt Max Lithium-Ion Cordless Impact Wrench Kit offers maximum torque without the inconvenience of a long cord. The tool has 130 ft-lb of maximum torque and 2,700 ipm that works on fasteners in even tough wood, masonry, and metal in no time. It is a breeze to use in small spaces, and cuts through rusted bolts or oxidized lug nuts quickly and easily. It is also stocked with items for long-term use in places that may not have easy access to power.

The kit includes two 20-volt lithium-ion batteries with built-in fuel gauge so you can go longer and faster on those difficult jobs that put you in a tight squeeze. The three front-facing LED lights offer brightness to dark workspaces. It’s also one of the smaller impact wrenches with the most torque at 3.4 pounds. 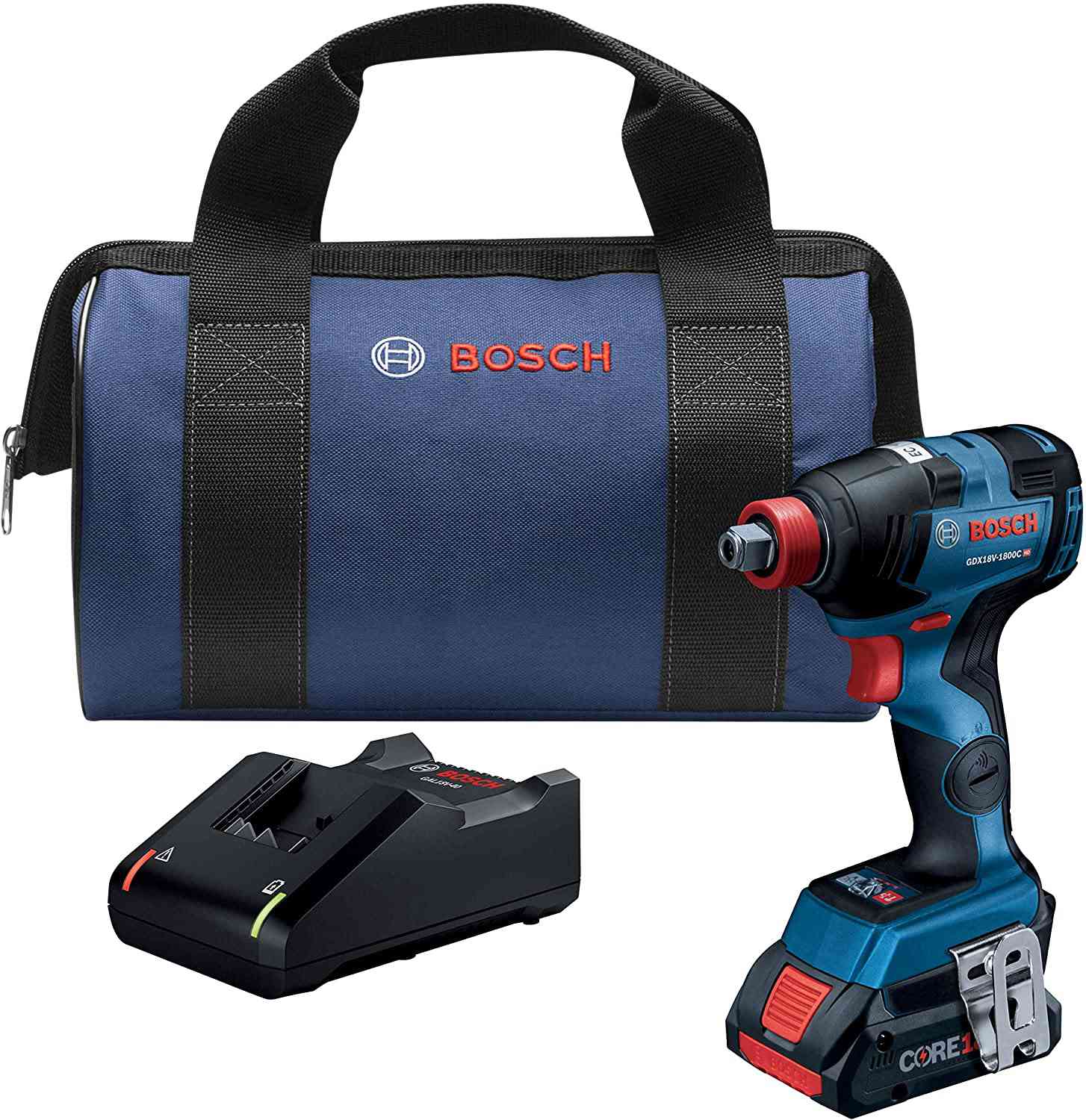 Sometimes a tool that is required to do two things at once actually does one thing better than the other. This isn't the case with the Bosch Freak 18-Volt Impact Wrench. It’s both a driver and a wrench, and it makes quite an impact at both.

It uses ¼-inch hex screwdriver bits and ½-inch impact sockets. The practical tool quickly switches between screwdriver and nut-driver bits (as well as sockets), so you won’t have to search around for an adapter for the more complicated jobs that require different tools. The powerful brushless motor delivers a maximum of 150 ft-lb of torque and up to 4,200 impact-per-minute for professional power and impact.

The Freak comes with battery, charger, and soft case, as well as a belt clip to keep it near at hand. 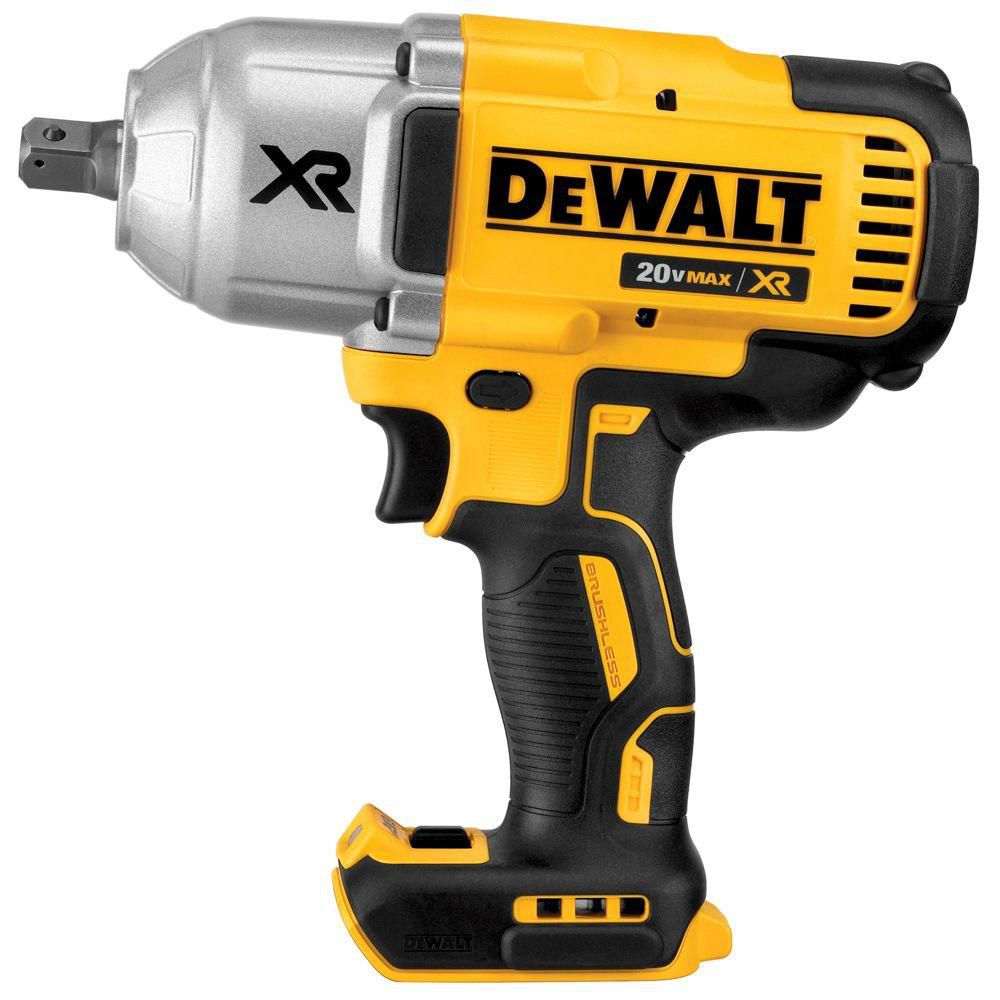 Removing stubborn lug nuts can be a painstaking task, so you'll want to invest in a heavy-duty tool that can get the job done quickly. Our top pick is the DEWALT 20V Max XR Lithium-Ion Cordless Impact Wrench because it has 700 ft-lb of maximum fastening torque, 1,200 ft-lb of nut-busting torque, and a brushless motor that will extend its life. Choose from three speeds—0-400/1,200/1,900 rpm—depending on your needs.

A ½-inch anvil with a detent pin makes the wrench resistant to breakage and the annoying shearing that so often comes with lug nut removal. It can handle drops from as high as 8 feet with its compact design and durable casing. This impact wrench also has an LED light with a 20-second delay for use in dark spaces. 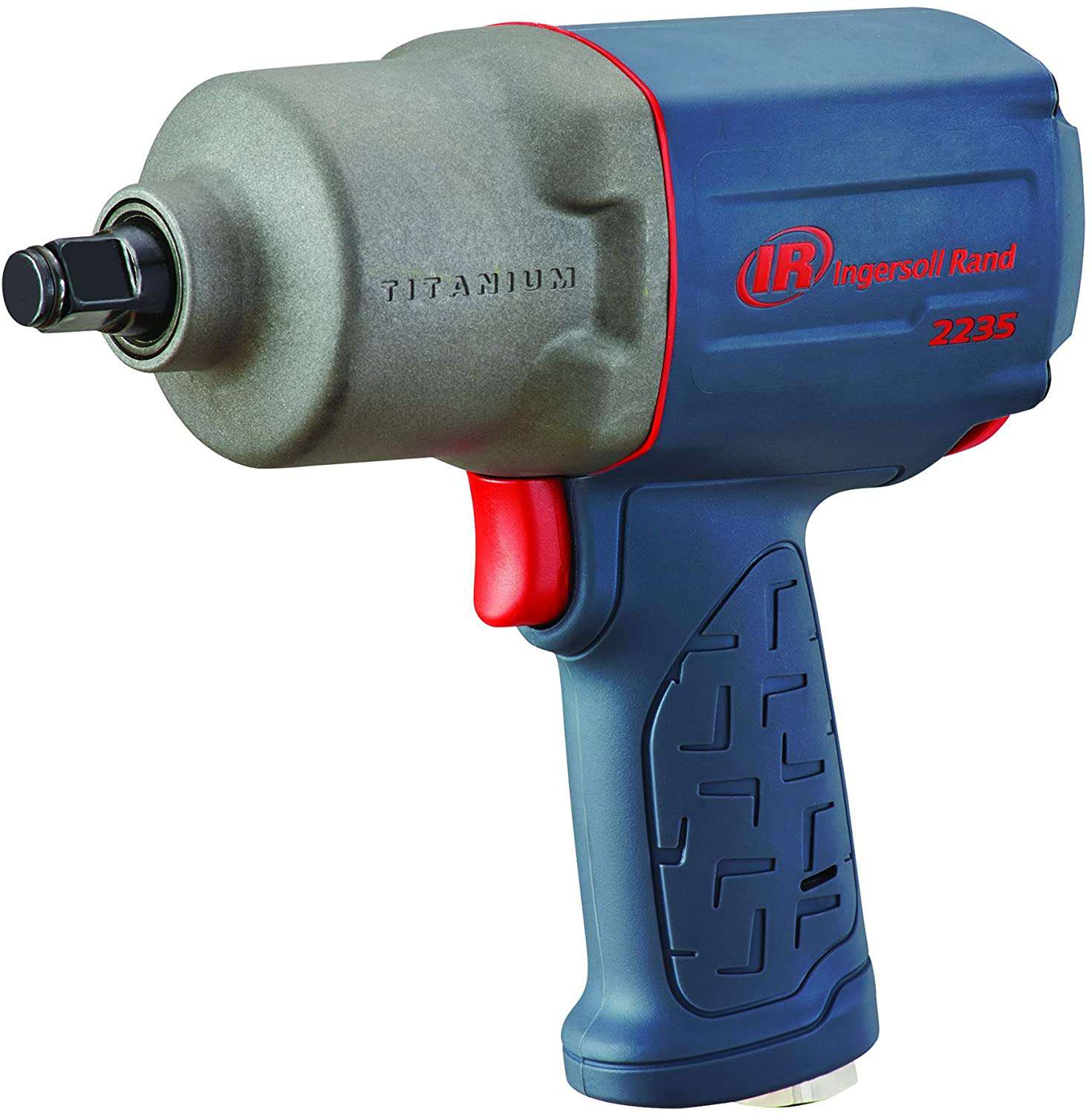 If you're looking for a high-performance tool that is lightweight but still able to pull off big jobs, the Ingersoll Rand 2235TiMAX Drive Air Impact Wrench is a great option. It has a well manufactured drive mechanism to put out serious spin ability with 1,350 ft-lb of nut-busting torque. Ingersoll’s ½-inch air impact wrench is known for its power-to-weight ratio, as it weighs in at only 4.6 pounds and has a four-position power regulator (which makes the torque easy to adjust).

This heavy-duty tool has a 4-position power regulator, so you can fine-tune the power to your needs, and it's very easy to switch the forward/reverse mechanism with just one hand. Note that you will need an air compressor capable of delivering at least 6 cfm of air at 90 psi for reliable performance of the impact wrench. 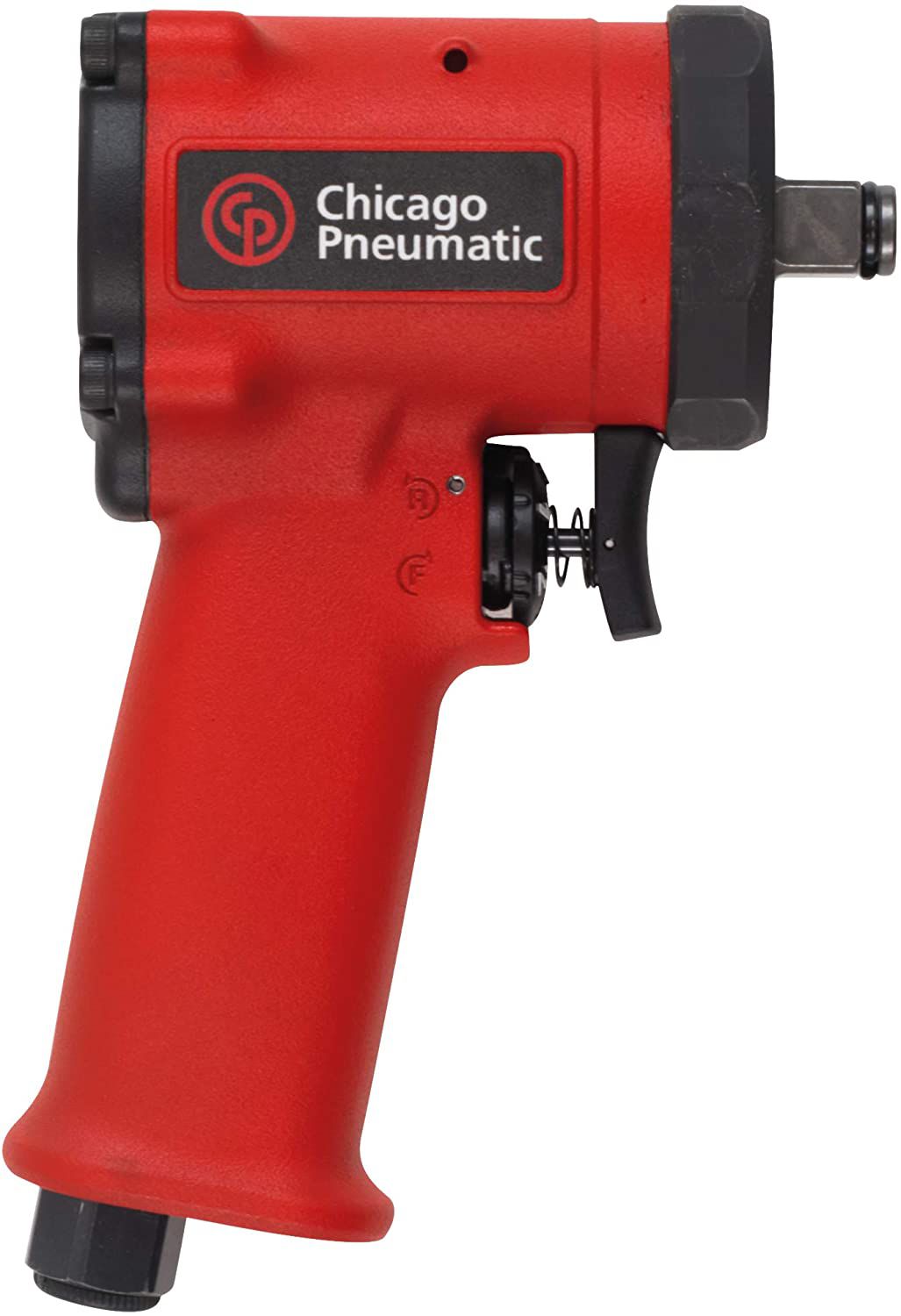 The Chicago Pneumatic CP7732 ½-Inch Stubby Impact Wrench is an absolute workhorse. Its stubby shape can easily maneuver in tight spaces, and it packs a powerful punch with 450 ft-lb of torque and up to 9,000 rpm. Use it to pull out stubborn stripped screws or oxidized bolts that are squirreled away in an inconvenient location. It's the perfect tool for working on transmissions or other deep-in-the-engine car parts.

The tool has a one-hand operation trigger with three position settings that come in both forward and reverse. Plus, this tool works well for people who are left-handed and right-handed. Remember that it requires an air compressor that can deliver at least 5 cfm at 90 psi for power, which is not included.

The Milwaukee Fuel High Torque Impact Wrench (view at Home Depot) is one of the most powerful impact wrenches for its size; it makes quick work of even the toughest nuts and bolts, letting you loosen or tighten them with ease. But if you merely need an impact wrench for simple tasks around the house or garage, and don’t demand the utmost in power and torque, you’ll find the PORTER-CABLE PCE211 (view at Amazon) is very reasonably priced and a great choice for the average DIYer.

What to Look for in an Impact Wrench

There are three basic types of impact wrenches: those powered by air, AC current, or batteries.

Pneumatic, or air-powered impact wrenches, are standard in auto-repair shops, but aren’t so popular for at-home or DIY use. These tools are very powerful, lightweight, and generally less expensive than electric impact wrenches, but require an air compressor to work and are generally more tool than required outside of a professional auto shop.

Corded impact wrenches are next in line when it comes to power, but tether you to the closest electrical outlet. Still, if you need a lot of power and don’t want to be bothered keeping track of a battery’s charge level, this could be the right choice for you.

Cordless impact wrenches are the most popular type for homeowners, DIYers, and those who do car repair as a hobby. On the plus side, these tools give you the utmost in freedom to use them wherever needed. On the downside, you’ll need to keep track of the battery life, cordless tools tend to be heavier than the other two styles, and they are a little less powerful when it comes to torque.

An impact driver is all about torque; that’s the tool’s twisting force. Some manufacturers state the torque in foot-pounds of force, while others use inch-pounds. Don’t automatically assume that you need the highest amount of torque; too much torque and you’ll find your fasteners snap in half.

As a general rule, you’ll find impact drivers with torque as low as 100 foot-pounds (1,200 inch-pounds) and as high as 1,000 foot-pounds, as well as everything in between. But for most people not working in professional auto shops, a tool towards the lower end of that range is more than sufficient, while a tool in the mid-range is suited for most automotive work.

The rate at which an impact driver spins is measured in revolutions per minute. As a rough guideline, most cordless impact wrenches have maximum speeds of anywhere between 1,000 and 3,000 rpm, with the middle of that range being average. Some impact drivers have variable speed controls so you can choose from two or three different settings depending on your needs.

This article is edited and updated by Michelle Ullman, the tool expert for The Spruce. She has extensive experience not only in writing about all things related to the home, but also in carrying out various DIY projects, including landscaping, painting, flooring, wallpapering, furniture makeovers, and simple repairs. For this roundup, she considered dozens of impact wrenches, evaluating each for basic features, extras, and customer feedback.