The 8 Best Lighting for Bathrooms

Brighten up your space

Written by
Camryn Rabideau
Camryn Rabideau is a freelance writer specializing in decorating and design. She covers home products for The Spruce and has also been published on Food52, Martha Stewart, and USA Today.
Learn about The Spruce's Editorial Process
Camryn Rabideau 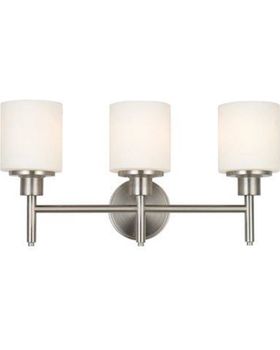 Buy on Wayfair Buy on Birchlane.com

One of the best bathroom light fixtures, no matter your decor style, is the Zipcode Design Knouse 3-Light Vanity Light. This chic, versatile design is the perfect wall-mounted fixture to put over your bathroom sink, and it comes in four traditional metal finishes to match any home.

This light fixture is damp-rated, meaning it can be used in damp locations without worry, and you can mount the three glass shades up or down, depending on what style you like better. The fixture requires three 100-watt bulbs, and reviewers say the sleek design helps to bring a modern touch to any bathroom. Several people say they love how much light this bathroom fixture provides, and you can’t beat the affordable price.

The 8 Best Light Bulbs for Bathrooms in 2020

Tired of straining your eyes as you try to blend your makeup in a dimly lit bathroom? You need more light, and the Chende Hollywood Style LED Vanity Mirror Lights are the perfect (affordable) solution. This kit comes with 10 dimmable LED vanity light bulbs that you can arrange in any formation, and they give off a bright “daylight” light that will make makeup application a breeze.

Each of these bulbs is 2-inches in diameter, and you can adjust the length between them on the 12-foot wire. Then, you just stick the bulbs onto your mirror, and you can turn them on and off using the dimmer switch. They can be installed in just a few minutes—no tools required—and reviewers say the lights are amazing, especially for the reasonable price point. Many note that these are a must-have for any makeup vanity or bathroom setup. 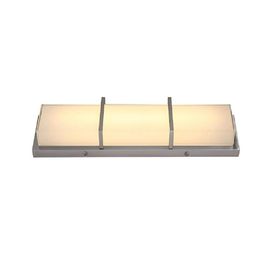 LED lights are beneficial for several reasons, including that they use significantly less energy than traditional lights and will also last for many years without needing new bulbs. If you want to install LED lights in your bathroom, one highly rated option is the Allen + Roth Brighton 3-Light LED Vanity Light, which is sleek and modern.

This vanity light comes in a few metal finishes, and you can choose from several lengths, including 20- and 27-inches. It uses an 18-watt integrated LED for maximum efficiency, and it’s damp-rated for safe use in bathrooms. The frosted shades diffuse the light for the perfect level of brightness, and the fixture is compatible with a variety of dimmer switches. Reviewers say the Allen + Roth Brighton LED Light is high-quality and looks incredibly modern, and many love that they won’t have to change any light bulbs for years to come!

Buy on Amazon Buy on Houzz

Light fixtures are notoriously expensive, but the Hardware House Saturn 4-Light Bath Fixture is a total steal at under $50. The light has a more traditional look and silver nickel finish, and its four lights will illuminate your whole bathroom—plus, there are matching ceiling lights and sconces if you need other fixtures for your home.

This light has four Alabaster glass shades, and it requires 60-watt light bulbs. Reviewers say it’s a great product to use above the mirror in your bathroom, as it puts off a ton of light. Many note that its appearance is high-quality, but a few say you have to be careful during installation, as the metal will bend if not handled properly. 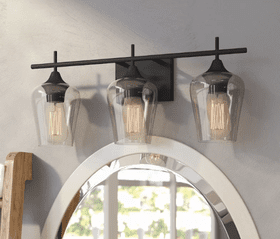 If you like to dim the bathroom lights and take a relaxing bath at the end of the day, you’ll need a fixture that’s compatible with a dimmer switch. You’ll find everything you’re looking for with the beautiful Mercury Row Hockerson 3-Light Vanity Light, which has a clean-cut, contemporary design.

This vanity light has three wine glass-shaped shades that can be mounted up or down, depending on your preference. It comes in three classic finishes and uses 60-watt light bulbs. Plus, it can be connected to a dimmer switch so you can dim the lights to set the mood in your bathroom. Reviewers simply can’t get enough of this contemporary bathroom light, which they say is stunning and makes a perfect finishing touch on any room. 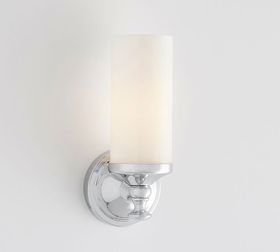 Some people prefer sconce light fixtures in their bathroom, and you can’t go wrong with the Mercer Single Tube Sconces, which have a classic, elegant design. They come in four sleek metal finishes to match your decor, and you can buy them individually or in sets of two.

These sconces are damp-rated for use in bathrooms and other indoor locations, and they have frosted glass shades that provide a warm, bright glow. The fixtures are made from steel and zinc, and they’re designed to be used with 60-watt light bulbs. They’re the perfect accent to put on either side of your bathroom sink or incorporate into other areas of your bathroom. 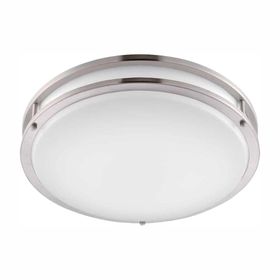 Flush mount is another term for a ceiling light, and you’ll love the simple design of the Hampton Bay Brushed Nickel LED Round Flush Mount Light. Its clean design will blend in with just about any decor, and the fixture is Energy Star listed, meaning it uses significantly less energy than traditional fixtures.

This brushed nickel fixture uses just 25 watts of power, yet produces the equivalent of a 90-watt light output. The LED light has an expected lifespan of 50,000 hours, and you can attach it to a standard dimmer. The fixture is damp-rated, so it’s safe to use in the bathroom, and reviewers say it’s attractive, easy to install, and incredibly bright. Some even go so far as to say it outperforms its reasonable price point! 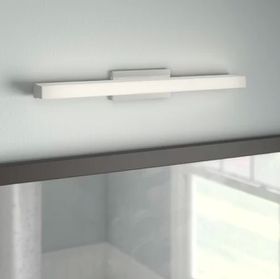 If you prefer the streamlined look of bath bars, the Orren Ellis Salcedo 1-Light Bath Bar will be just your style. This sleek bathroom light is wet-rated for use in damp locations, and its sleek design will be the perfect addition to any modern home.

This bath bar has a metal base and acrylic shades, and its LED bulbs have a brightness of 1115 lumens. It can be attached to a dimmer switch, which customers recommend using, as the light is very bright! Reviewers say this light goes beautifully with most bathroom decor and it's well-made. One customer even went so far as to say that the quality was "beyond what they had expected."