The 7 Best Miter Saws of 2022 for Perfect Angled Cuts

Michelle Ullman
Michelle Ullman is a home decor expert and product reviewer for home and garden products. She’s currently the commerce editor for home improvement and tools on The Spruce. She has been writing about home decor for over 10 years for publications like BobVila.com and Better Homes & Gardens, among others.
Learn more about The Spruce's Editorial Process
Reviewed by
Johnathan Brewer

Reviewed by Johnathan Brewer
Johnathan Brewer is a home improvement expert with over two decades of professional experience as a licensed general contractor specializing in kitchen and bath. He has been featured on HGTV’s “Super Scapes,” “Curb Appeal the Block,” “Elbow Room,” DIY Network's “House Crashers,” "This Old House," and OWN Network's Emmy award winning show, “Home Made Simple.” Jonathan is also a member of The Spruce Home Improvement Review Board.
Learn more about The Spruce's Review Board

Miter saws provide smooth crosscuts—cutting straight across the wood’s grain—but where they really shine is in creating perfect miter or bevel cuts.

We evaluated miter saws based on accuracy, reliability, durable construction, versatility, and overall performance. Our top choice is the DEWALT 12-Inch Sliding Compound Miter Saw, which excels in all areas.

Here are our favorite miter saws. 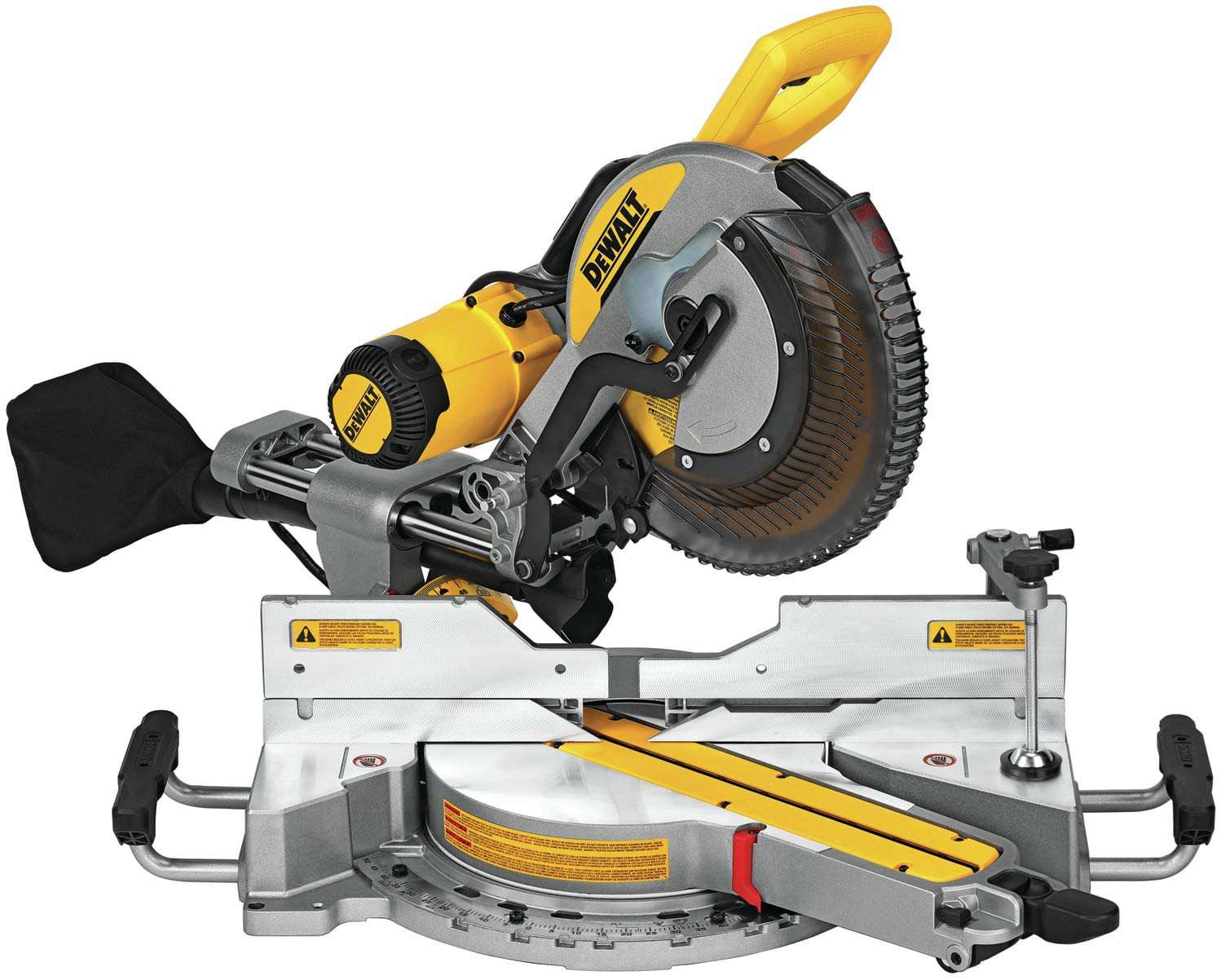 If you need to cut larger boards, including 4 x 4s or lumber up to 14 inches wide precisely and quickly, you’ll appreciate the size and power of the DEWALT 12-Inch Sliding Compound Miter Saw. This versatile tool has sliding guiderails to allow for larger or longer materials—with a special setup included in the instruction manual, you can even crosscut boards up to 16 inches across, which is especially handy if you are building cabinets, a deck or fence, or preparing lumber for hardwood flooring. But it's not only good for working on large boards; you can of course also use the tool to precisely cut baseboards, moldings, and other trim pieces.

The saw has a 15-amp motor with a no-load speed of 3,800 rpm. It adjusts for miter cuts up to 60 degrees to the right and 50 degrees to the left, and bevel cuts from 48 degrees to the right or left. Ten positive stops on the stainless steel detent plate make quick work of precisely cutting at common measurements. And you won’t need to worry about excessive sawdust; the highly efficient dust collection system captures over 75 percent of dust, although you still need to wear protective eyewear as with any power saw.

These Are the Best Oscillating Multi-tools for DIY Projects 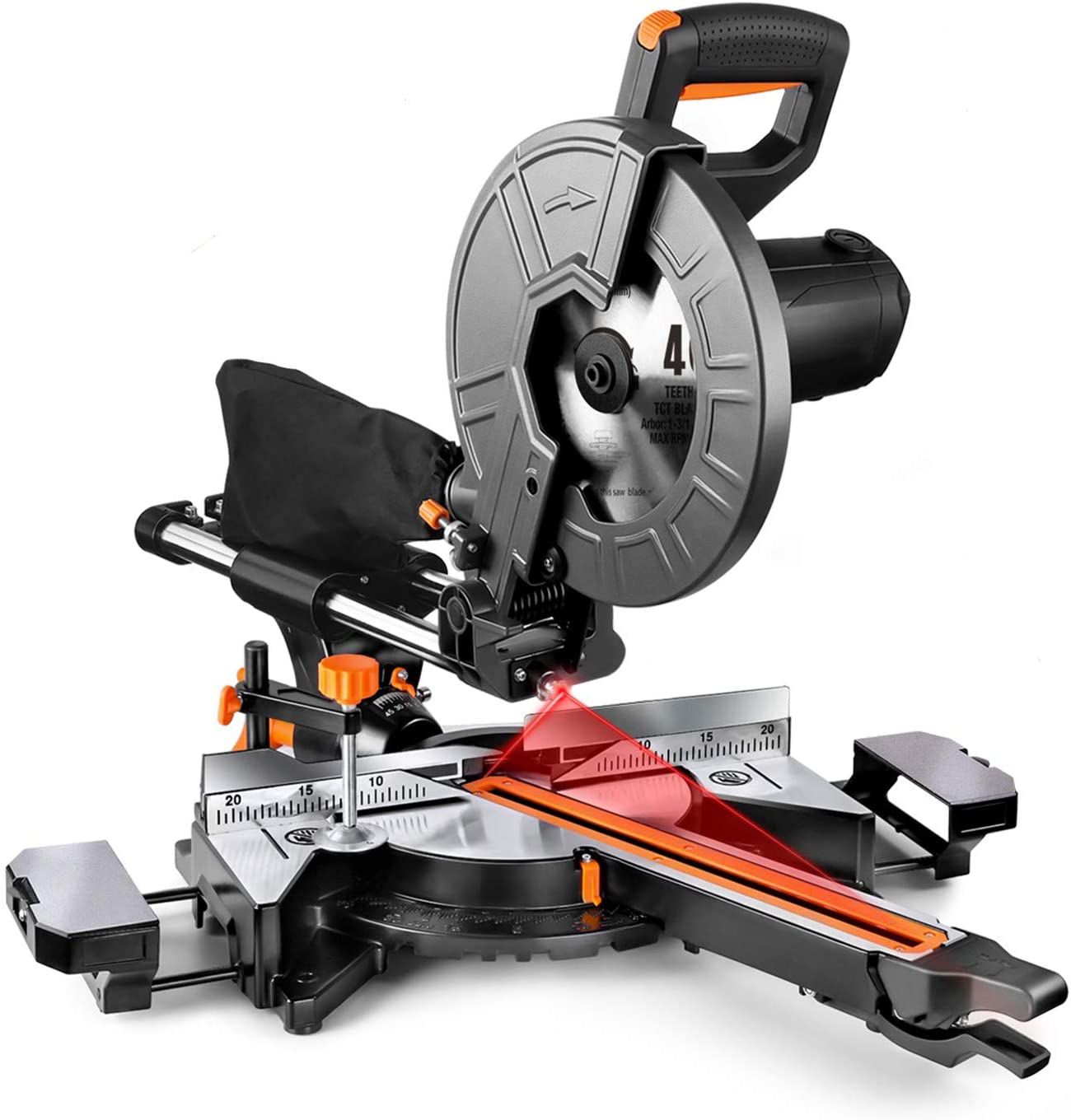 Crosscuts, bevel cuts, miter cuts, working on boards as big as 13 inches across, slicing through wood, plastic, and metal: the TACKLIFE 10-Inch Compound Sliding Miter Saw does all of these things and more.

This feature-packed saw comes with three 10-inch blades—one with 48 teeth for multipurpose use and two with 40 teeth for cutting wood and plastic—a laser guide for the utmost in accuracy, an extendable table for stability when cutting longer materials, an iron blade shield for safety, and a chip bag plus dust port to keep sawdust to a minimum.

The saw has a 15-amp motor and two speeds: 4,500 rpm for speed, or 3,200 rpm for precision. That's an unusual feature for a miter saw. You can adjust the bevel angle from 0 to 45 degrees, and the miter angle from -45 degrees to 45 degrees. This is a great saw if you are cutting wood for crown molding or baseboards, or make furniture with beveled or angled trim.

Here Are the Best Scroll Saws for Precise Woodworking Projects 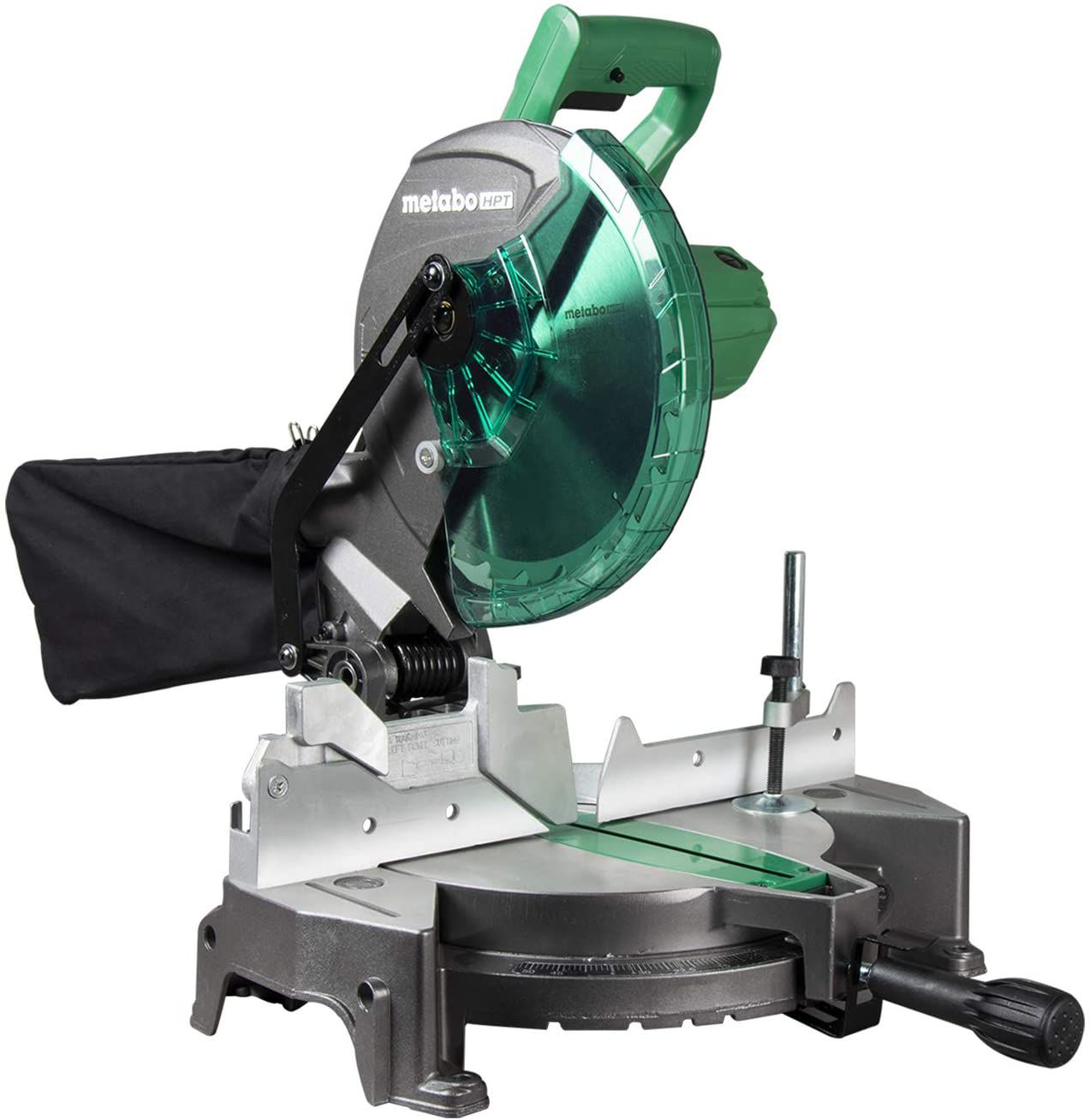 If you only expect to need a miter saw occasionally, or for one big project redoing flooring, making a piece of furniture, or cutting trim, there’s no need to spend a lot of money on your miter saw. Instead, consider the Metabo HPT—that’s the new name for Hitachi—C10FCGS 10-Inch Compound Miter Saw.

While there’s no sliding rails for cutting wider materials—the maximum width is 5-21/32 inches—nor a laser for extra guidance, you do get a saw with a 15-amp motor, a no-load top speed of 5,000 rpm, a bevel range of 0-45 degrees to the left, and a miter range of 0-52 degrees to the left or right. That’s pretty much all you need to tackle most DIY projects around your home or workshop.

If you build dollhouses, models, picture frames, or other crafts that require detailed work on very small pieces, you probably don’t need a large, powered miter saw. Instead, you’ll find a miter box, such as the one from Olson Saw, to be highly effective for your needs and your budget.

Basically, a miter box is a metal box—this one is aluminum—with slots for positioning a small hand saw at just the right angle for making accurate miter cuts. The box has three 0.14-inch slots: one each for 45, 60, and 90-degree angled cuts. You can cut materials up to 2 inches in width and 7/8 inches in depth.

You’ll also get a wooden-handled fine kerf universal saw with a 6-1/2-inch, 42-teeth-per-inch blade. The saw easily cuts through balsa and other soft woods, plastic, copper, and brass, leaving behind smooth edges without any ragged spots requiring further sanding.

The Olson Saw Miter Box is the perfect addition to any crafter’s toolkit, or as a useful tool if you want to cut a few pieces of wood or other materials to use as trim on furniture or around the house. 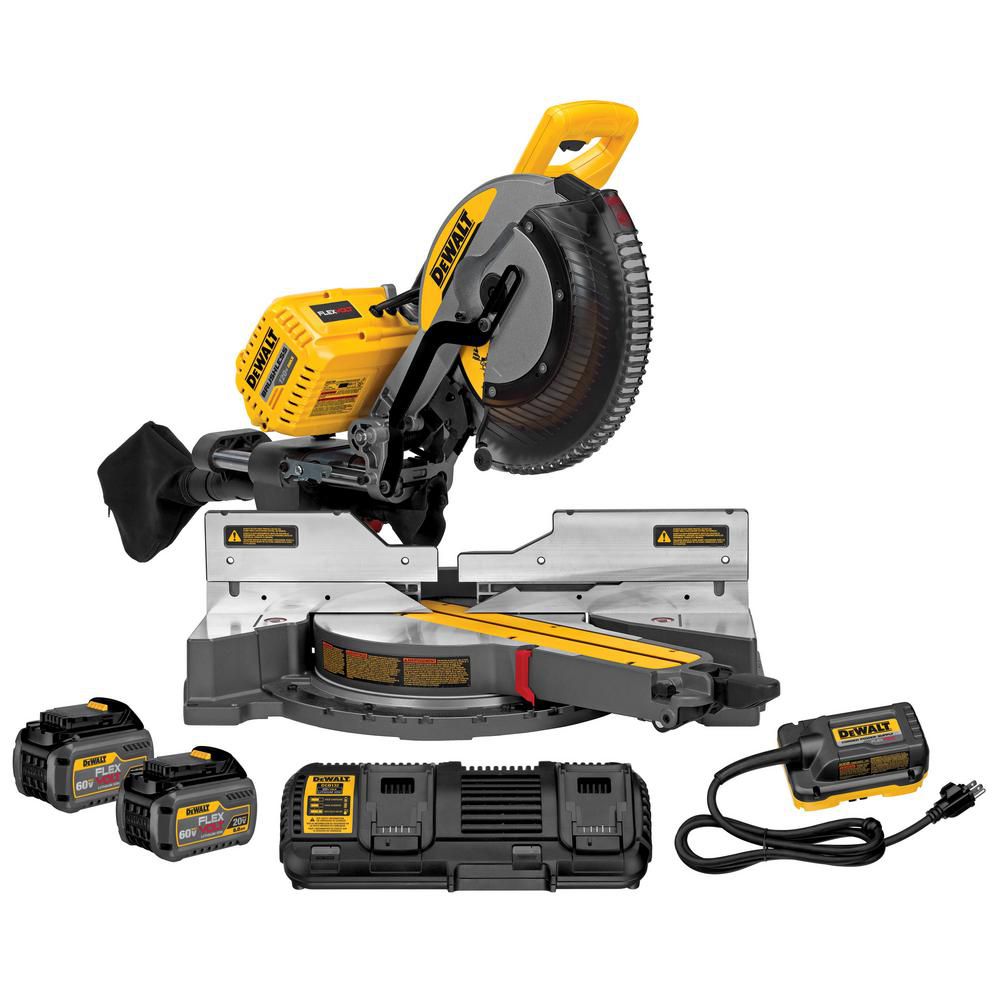 Most miter saws require a consistent power source to work reliably for long periods of time. While this is no problem for garage or backyard projects, it can be a challenge if you are on a worksite far away from an outlet. That is where a cordless miter saw has the advantage. With a large ion-lithium battery, the DEWALT Flexvolt 120-Volt MAX will work in places average miter saws won’t.

The dual compound sliding saw is compact for extra portability. Powered by two 60-volt battery packs, the 12-inch blade will last up to 289 crosscuts on a single charge. Beyond the portability, the saw also includes standard miter settings up to 50 degrees to the left and 60 degrees to the right, and an adjustable back-and-forth slide for wider woods. For longer projects, you can also plug the saw into an outlet with the supplied cord. 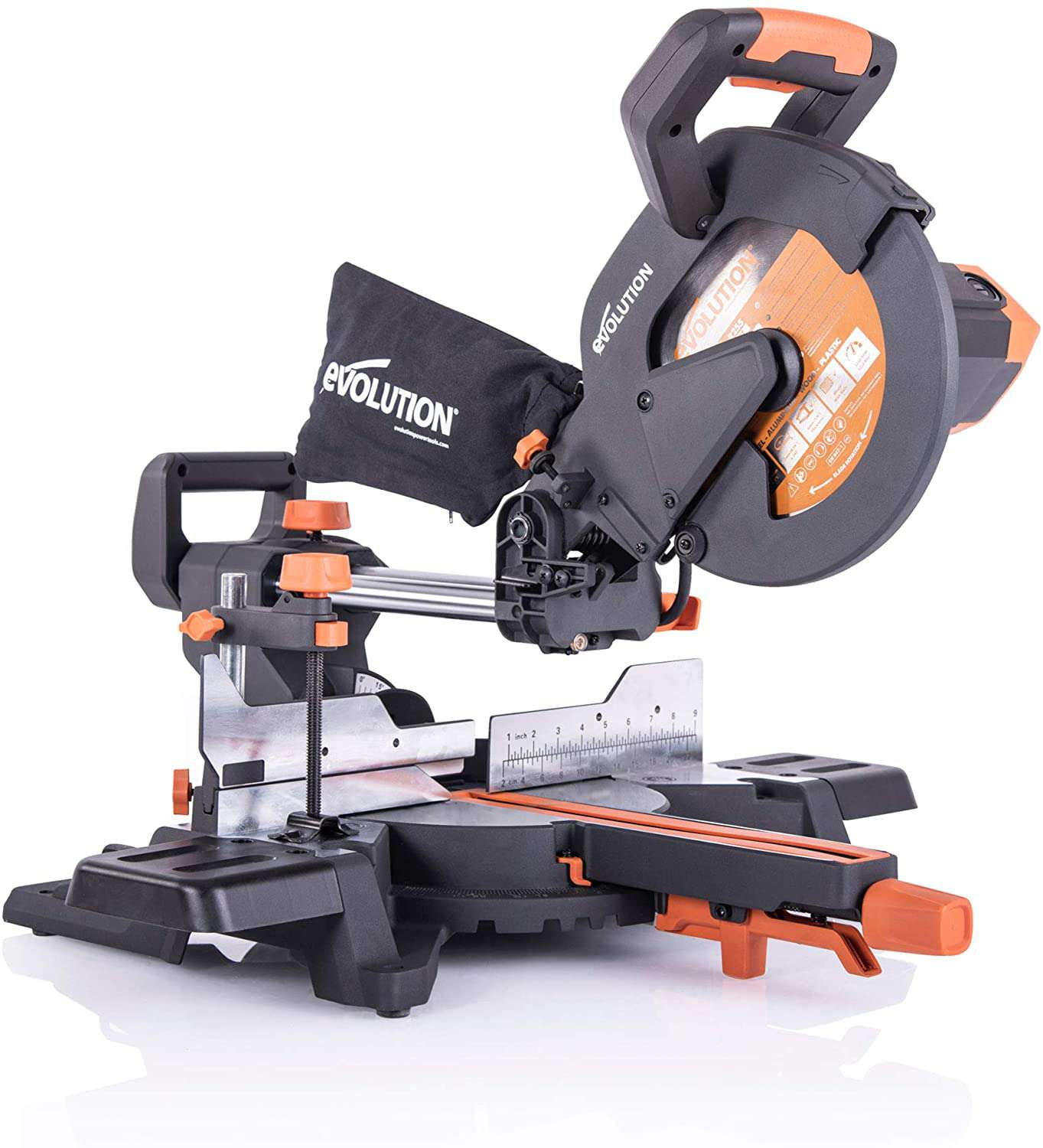 Most miter saws require a change of blades if you plan on cutting materials other than wood. Not so with the Evolution Power Tools 10-Inch Multi-Material Sliding Miter Saw, however. Its premium Japanese tungsten-carbide-tipped blade easily handles a wide range of materials, including hardwood, reclaimed wood with nails, mild steel, rebar, aluminum, copper, electrical conduit, plastic pipes, plexiglass, rubber, and composites.

The saw has a 15-amp motor and no-load top speed of 2,500 rpm. It can crosscut wood up to 11.75 inches wide, and cuts bevels up to 45 degrees and miter cuts up to 50 degrees in either direction. And with the included laser guide, you’ll always know that your cuts are precise. The dust bag keeps sawdust under control for a cleaner workshop. 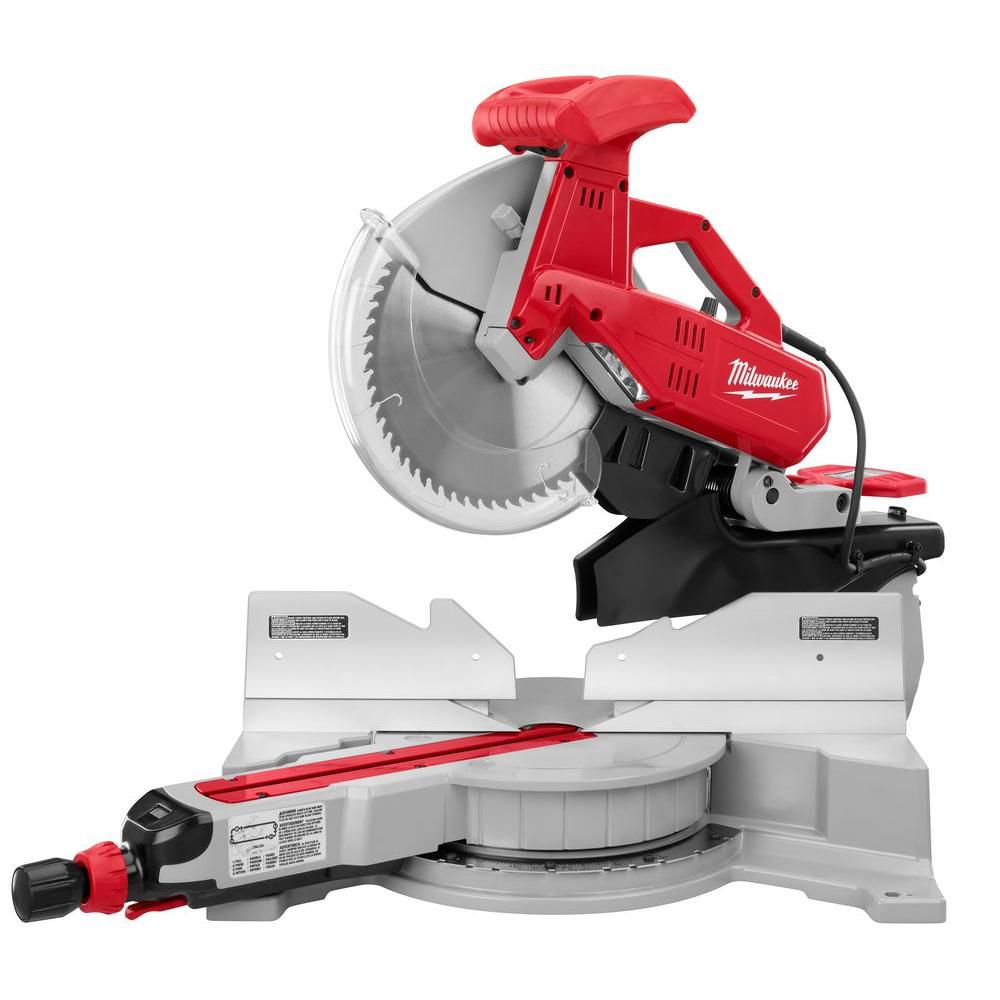 View On Amazon View On Home Depot View On Toolup.com
What We Like
What We Don't Like

Cutting trim, baseboards, siding, and other panels requires a dual bevel for clean cuts on either end of the piece. Since baseboards and other trim are typically long pieces of wood, a sliding dual-bevel blade is the best choice if you'll be taking on such a project. The Milwaukee 12-Inch Dual-Bevel Sliding Saw comes with many handy features in addition to the dual-bevel blade to make cutting trim, baseboards, and similar items quick and painless.

The carbide blade is 12 inches in diameter for wider cuts. When even more width is required, the blade moves back-and-forth on the sliding arm. With a dual-bevel cutter capable of up to 48-degree angles in either direction, this blade is also a perfect choice for people wanting more drastic bevels in their wood cuts. The 15-amp motor is one of the most powerful drivers on the market, capable of up to 3.3 horsepower to chew through denser materials.

The TACKLIFE 10-Inch Sliding Compound Miter Saw (view at Walmart) can handle just about anything you throw at it, including crosscuts, bevels, miters, large boards, wood, plastic, and even metal. That, plus its impeccable performance and many great features win it our top spot. But if you’re just looking for a basic miter saw for occasional use, you’ll find that the Metabo HPT C10FCGS 10-Inch Compound Miter Saw (view at Amazon) is suited to most DIY projects and is very reasonably priced.

What to Look for in a Miter Saw

When choosing a miter saw, you’ll have two choices for the power source: batteries or AC current.

The majority of miter saws are corded power tools that run off your household AC current. The common motor sizes are 10-amp, 12-amp, and 15-amp. But while the lower powers are sufficient for light, occasional use, if you expect to rely on your miter saw for frequent use, cuts through large or thick pieces of wood, or extended cutting sessions, you’ll likely be happiest with a 15-amp motor.

Cordless miter saws generally run on a 20-volt battery. The advantage of these tools is that you can take them anywhere without needing to worry about an electrical outlet or a cord getting in your way. On the downside, they are not as powerful as their corded counterparts and you’ll need to keep track of the battery’s available life to avoid running out of juice midway through a project.

Whether corded or cordless, most miter saws reach a maximum unloaded speed of somewhere between 2,500 rpm and 5,000 rpm.

“One of the biggest dangers with corded tools is the cord itself. Along with potentially being a tripping hazard, it can also be an electrical hazard if the cord is damaged in any way. You want to check that there are no cracks or fraying in the cord before each use.” Andrew Wilson, home improvement
contractor and founder of  Contractor Adviserly.

There are several different types of miter saws, based on the cuts and angles they can achieve. As the name suggests, all miter saws are capable of a miter cut, which is an angled cut across the width of the board, and a crosscut, which is a simple cut straight across the board, but some miter saws go beyond that to include bevel cuts, which are angled cuts that create something like an “overhang” at the cut edge. The five basic types of power miter saw are:

The two most common sizes of miter saw blades are 10 inch and 12 inch, although there are also saws with 8-inch blades for detailed work.

If you only expect to use your miter saw for cutting trim or siding, and don’t plan on cutting anything more than an inch thick or 6 inches wide, a 10-inch miter saw should be sufficient. But if you need to cut larger boards, or just want more versatility, a 12-inch miter saw is the better choice.

This article is edited and updated by Michelle Ullman, the tool expert for The Spruce. She has extensive experience not only in writing about all things related to the home, but also in carrying out various DIY projects, including landscaping, painting, flooring, wallpapering, furniture makeovers, and simple repairs. For this roundup, she considered dozens of miter saws, evaluating each for basic features, extras, and customer feedback, as well as input from Andrew Wilson, home improvement contractor and founder of  Contractor Adviserly.