Improve your skills and spin

Written by
Derek Rose
Derek Rose is the Coffee and Tea Expert for The Spruce Eats. He received an MFA in Creative Writing from Columbia University and a BA in Communications from Marist College.
Learn about The Spruce's Editorial Process
Derek Rose 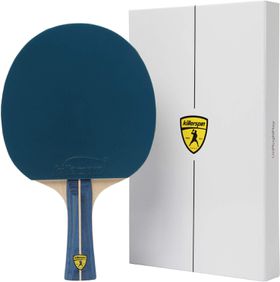 Five layers of premium, lightweight wood. High-performance rubber. Three eye-catching colors—navy blue, mocha, and lime. And a bargain price. The Killerspin JET200 tops our list for its combination of quality, cost, and durability.

It’s a wonderful product for ping pong newcomers looking to improve their skills, families hunting for an affordable way to play a fun game and even experienced players who want a sleek, top-grade paddle.

The JET200 has a flared wooden handle for extra comfort, balanced weight distribution for a dependable shot every time and adherent rubber to provide extra power and spin.

This product is also packaged in a one-of-a-kind personalized memory book storage case. Inside the box is a marker and a section to write down scores of old games or personalized messages, making it a great gift for table tennis lovers.

Buying a budget ping pong paddle can get dicey. You could easily walk into the nearest sporting goods store and find a few different paddles under $10, but, as with most things, paying less might come with drawbacks. Cheaper ping pong paddles are more likely to chip, warp, and have rubber that peels or bubbles. But EastPoints Sports 3.0 paddle is a dependable product, and its starting price is incredibly affordable.

This paddle features a high-tack rubber design for a combination of speed and spin, and the sponge backing beneath the rubber allows it to withstand harder strikes while also providing increased ball control.

While some customers did have issues with the rubber peeling, at such a low price this product can be replaced several times over the years and still be more affordable than other paddles of similar quality.

Like many major table tennis retailers, STIGA rates their paddles in three categories: power, control, and spin. They rank the Pro Carbon as their best in spin, with a perfect 100 out of 100 rating.

This paddle has a 7-ply extra light wooden blade, coated in rubber and two millimeters of cushioning sponge. Two internal layers of carbon give it improved rigidity and response with every strike, and the unique shock dispersion tube absorbs vibration so that all energy is transferred through the handle instead of sending a shock to your hands.

If you’re a ping pong newcomer hoping to increase your skills, the STIGA Supreme Performance will give you a professional paddle at an affordable price. This paddle features STIGA’s top-grade care, with a 6-ply extra lightweight blade, a two-millimeter sponge to absorb vibration and future inverted rubber for a clean, solid strike every time.

What makes this product especially suited for beginners, whether they’re new to competitive ping pong or to the sport in general, is its well-rounded attributes. STIGA grades the Supreme Performance with a 90-speed rating, a 92 spin rating and an 89 control rating. Now, it may seem intuitive to want 100’s across the board, but having a paddle with that level of speed and spin could actually make play more difficult for someone just starting out. Imagine you were still learning to drive and someone put you behind the wheel of a Formula One car. Instead, you would want to start with a car that has excellent dependability and functionality, which sums up STIGA’s Supreme Performance.

Killerspin returns to our list but with a big makeover. Their Diamond TC RTG Premium is the best of the best—exquisitely crafted for the most serious competitors.

The price tag for the Diamond TC RTG Premium may be steep, but compared to paddles in a similar price range, this one tops all for its combination of speed, spin, and control.

This paddle will raise your skills to the next level and provide a distinct advantage over the competition. Its blade is constructed of titanium carbon fiber and seven layers of composite wood, making your every backhand, forehand, and serve lightning quick and deadly accurate.

“I'd never experienced such response and speed when hitting a ping pong ball,” one customer wrote. “Once I adjusted my playing to fit this beauty, it's blown my mind and totally revolutionized my ping pong game.”

The trickiest part of purchasing a ping pong paddle set is making sure it checks all the boxes. Some sets have quality paddles, but maybe it only comes with two paddles when you need four for family and friends to play. Other sets come with loads of products—four paddles, a dozen ping pong balls, a carrying case—but the quality may be lacking. Peeling paddles, balls that bounce as well as rocks.

As an added reason to love this set, JP WinLook offers a free 1-year replacement warranty, allowing you to buy with confidence. Customers praised the company’s customer service, saying that if they had any issues with the product JP WinLook promptly sent them replacement materials, hassle-free.

You may have seen clips of professional ping pongers using the funky penhold-grip. Especially common among Eastern players, this grips looks exactly like what the name suggests: as if you’re holding a pen. The paddle faces at a downward angle, contrasting with the more common shakehand grip.

The penhold style of play is ideal for competitors who stay close to the table during volleys and who don’t want to turn their wrists when going between backhand and forehand. To get the most out of this grip, you’ll want a paddle with a shorter handle, as it provides more comfort, control, and speed, and a small gap of wood between the handle and the rubber.

The DHS 6006 New Series Superstar Penhold is crafted to provide the utmost performance for penhold players, made of imported wood and Chinese rubber. It has a larger blade design, giving players a big sweet spot for their strikes. Keep in mind that this is a heavier paddle than most, clocking in at 9.6 ounces. Again, this is done with penhold players in mind, as the extra weight adds control and shot power without altering the short, quick movements that penhold players are best at.

The 7 Best Ping Pong Tables
Continue to 5 of 7 below.