A good stud finder can make the difference between a successful DIY home project and a disaster. When hammering or screwing things into walls, ceilings, and floors, you need to know what is on the other side. After all, you don't want your heavy television to come crashing down because it wasn't truly anchored into a stud.

All stud finders do the same basic thing, using either electronic sensors or magnets: They detect where support areas like studs and joists are inside the walls. All stud finders can detect wood, most detect metal, and many also detect live electrical wiring. Some finders provide basic detection capabilities that are good for just walls. Others can be used on floors and ceilings. The best stud finders let you adjust the depth to which the sensors penetrate the wall, improving your odds of detecting everything of importance.

To cover all of your potential needs, here are the best stud finders. 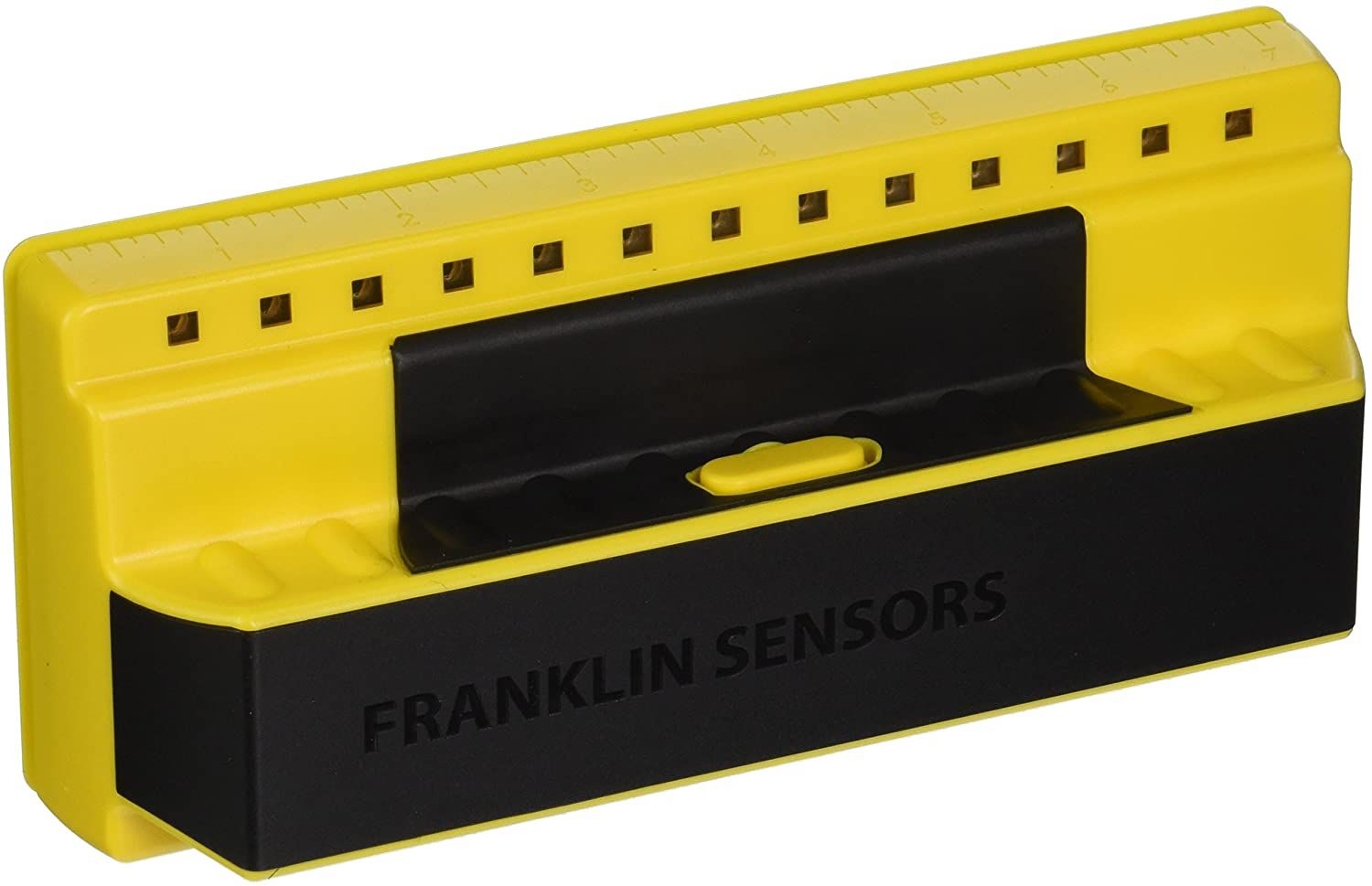 Above anything else, a stud finder needs to be accurate. For a successful project, you need to know what you are dealing with on the other side of the wall. The electronic ProSensor 710 Franklin Sensors Precision takes the top spot because of the accurate and detailed look it will give you; its 13 sensors simultaneously "look" behind the walls or underneath the floors, pinpointing the location of wooden studs and metal objects easily and accurately.

The Precision can scan a wide area of wall while searching for studs underneath. The extra width of the device means you will have a more accurate sense of stud locations as you move the finder along the surface. LED lights on the front will light up, marking the location and width of any stud, so you will know exactly where the stud begins and ends as you work.

"My husband and I used this model during the installation of a closet organizer. We tested three stud finders during this project, and the Franklin 710 was by far the fastest at locating studs. Thanks to its rectangular shape, it was also the only one that could locate a stud in a corner."—Stacey L. Nash, Product Tester

With the BLACK+DECKER BullsEye Line Laser with Stud Sensor, you get two tools in one. It’s the ideal assistant when you are hanging or mounting heavy items that need to be both securely fastened to a stud for support and perfectly straight, such as cabinets, mirrors, heavy artwork, televisions, or shelves.

Use the device first to find hidden objects inside your wall, including studs, metal pipes, wooden support beams, and live AC wires. The device works on drywall, lathe, plaster, and concrete walls. Just depress the power button—you’ll need to keep it depressed with your thumb or finger while you work—slide the device across the wall in your targeted work area, and listen for a beep when the tool encounters a stud or other object inside the wall.

Once you’ve found the stud that you want to use to securely anchor your object, switch the BullsEye to its level function. There’s a small pin on the back of the device you can use to anchor it to the wall, if desired, while you work. On line function, the BullsEye beams a red laser line up to 20 feet horizontally in both directions, giving you plenty of assistance in properly aligning whatever it is you want to hang.

The BullsEye comes with two AA batteries and is covered by a two-year limited warranty.

For the occasional weekend home project, there's no need to break the budget on a stud sensor. You still need to be careful, however, because many lower-priced options lack the accuracy you need to reliably drill into your walls without striking something you didn't expect to be there. Typically, the best budget options offer the basics without the extra detection capabilities. The Zircon StudSensor e50 will give you basic wood and metal stud detection at an affordable price without lacking precision.

This finder packs a lot of handy features within its small price tag. Capable of detecting both wood and metal studs, the finder will flash and beep once it has picked up the edge of a stud. It includes two scanning modes: StudScan for studs up to 0.75-inch deep and DeepScan for targets around 1.5-inches deep. The finder also includes the ability to detect live AC wires to avoid drilling into dangerous electrical hazards.

"The stud finder’s deep scan mode performed with the same accuracy as the standard mode, so it does give you some extra options if you’re working with thicker walls. As far as the live wire indicator, it’s a nice feature, but we’d still cut the power before drilling if you’re unsure of the location of an electrical wire."—Stacey L. Nash, Product Tester 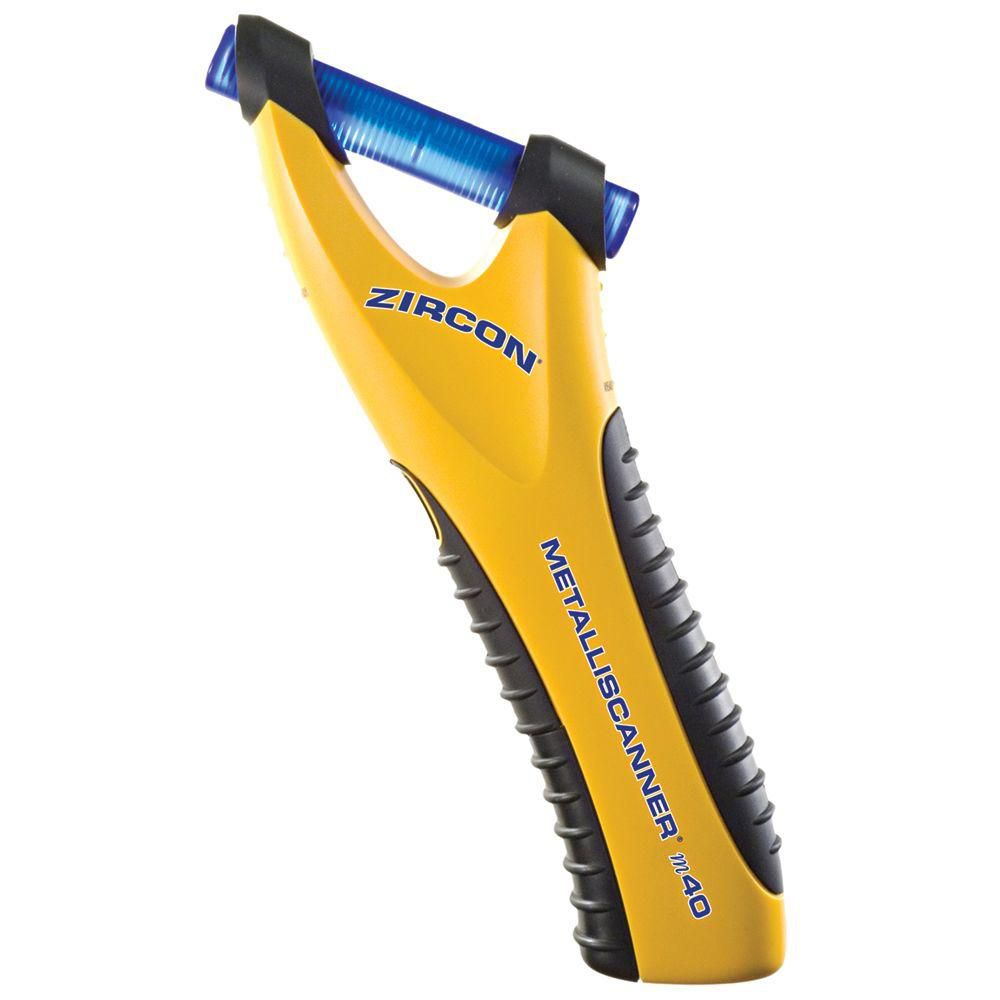 View On Amazon View On Walmart View On Home Depot

Metal is another support material that's often missed by typical stud finders calibrated for wood studs. Even magnetic finders might not register all types of metal, as many metals aren’t magnetic. The Zircon MetalliScanner m40, on the other hand, is custom-designed to detect a wide variety of metal supports and objects behind floors, walls, and ceilings.

The MetalliScanner will detect both ferrous (magnetic) and nonferrous metals behind most types of nonmetal walls, floors, and ceilings. Beyond metal studs and other support structures, this makes the finder great for locating smaller items like screws and nails deeply embedded into the wall up to 4 inches deep. The blue coil lights up as you move the finder to reveal the precise location of any object it detects, making it easy to pinpoint the location of hidden materials. 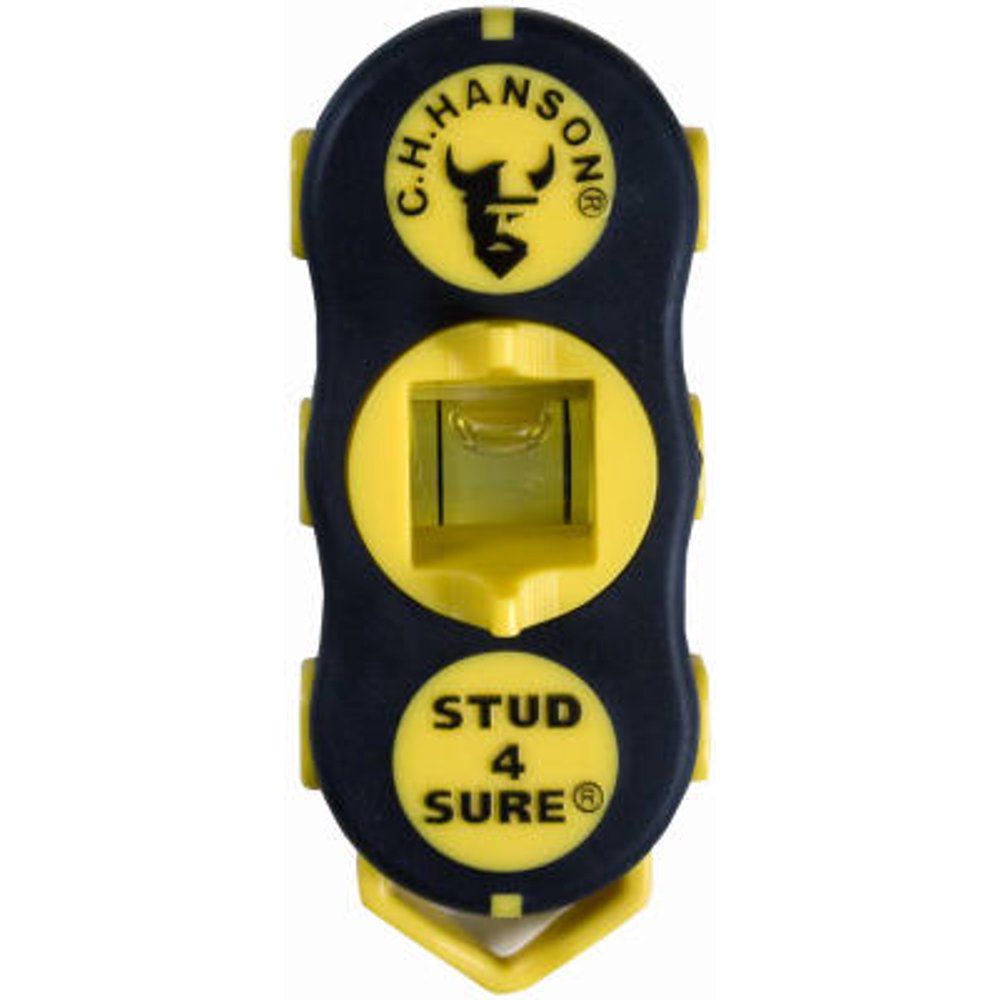 Magnetic stud finders are the old-school cousins of modern, more advanced electronic finders. Despite their simplicity, a good magnetic finder can be a great budget or additional option if you want something that will work without any batteries. Using a built-in magnet, stud finders like the CH Hanson 03040 will naturally be attracted to the nails and screws that hold the home’s frame together, giving you a good idea of where studs are behind the wall.

The finder uses powerful rare earth magnets to find metal studs and fasteners without any need for batteries. The body of the finder also includes a two-way level, so you can hang the finder from a metal stud for accurately leveling walls and other surfaces. A pointed arrow on the bottom will conveniently mark the safe spot for screws and nails, eliminating the need for trial-and-error while hanging pictures, frames, and other objects onto the walls.

"While it might not be fancy, it does accurately locate screws. The trick is having the patience to find them. Wall studs aren’t covered in screws, so it’ll take you some time to brush the CH Hanson across the wall until you hit one. If you don’t have any idea where the studs are to start with, the location process can take a while."—Stacey L. Nash, Product Tester

It’s important to have an accurate idea of the support behind the floors and ceilings if you have a project that requires drilling or hammering into these surfaces, such as hanging a ceiling fan. You certainly don't want a large chunk of drywall crashing down onto the floor or the top of your head. The Bosch GMS120 is a multi-scanning option that is comfortable to hold in awkward positions, making overhead work safer and easier.

The ergonomic design of the finder houses a multi-mode sensor capable of detecting wood studs, metal support objects, and live AC wiring at the same time. This finder is the top choice for floors because it provides a deep 4.75-inch scan depth and can handle materials as dense as cured concrete. The LCD display and audible detection signals also provide plenty of feedback for finding objects underneath the floor surface. 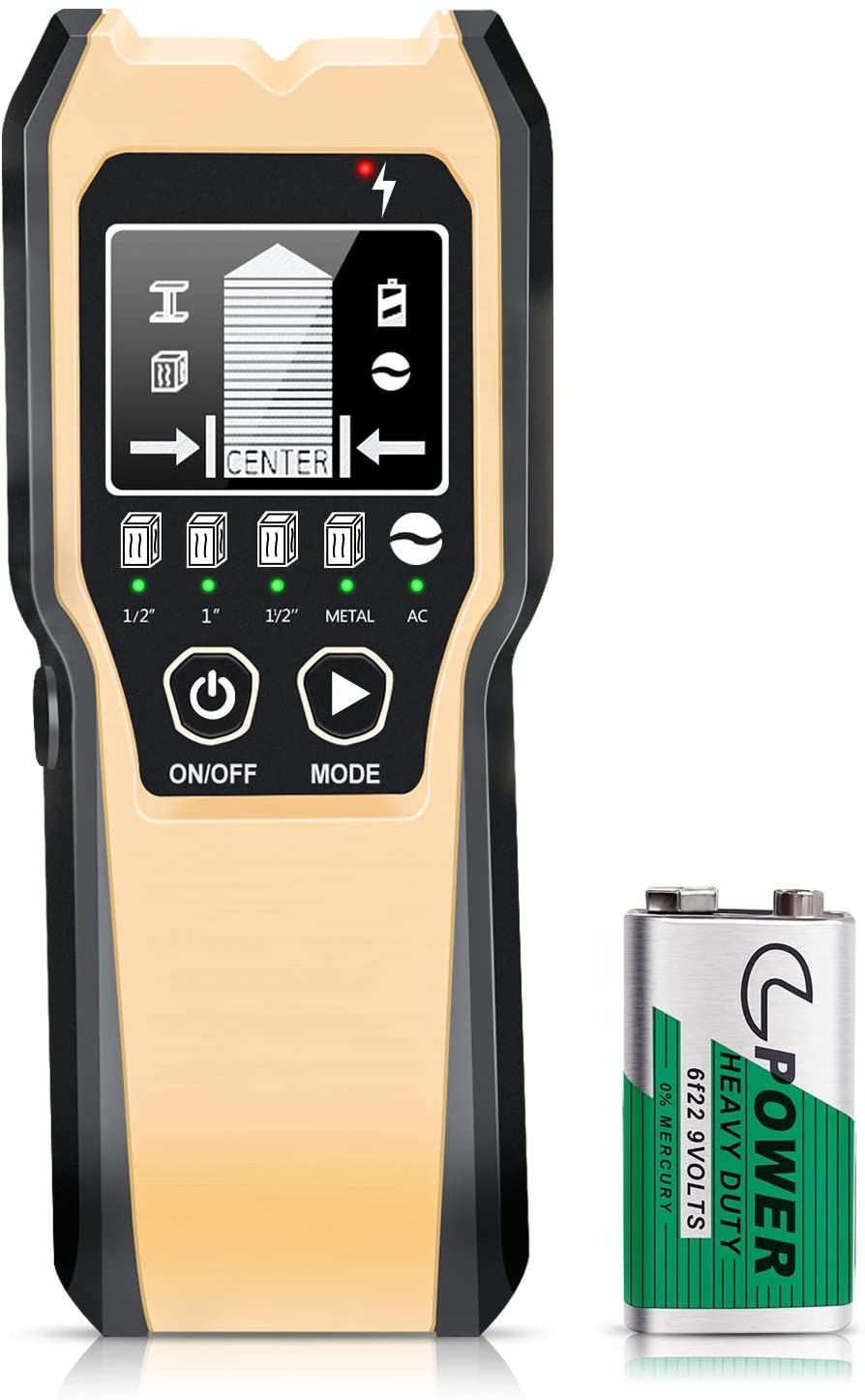 One of the most dangerous things hidden inside walls and ceilings is live electrical wiring. Wiring to the lights, outlets, and switches can kill if you are drilling or hammering into your walls with the power on. But even when the power is off, you can still avoid the headache of severing a wire with a finder that can detect the smaller profile of AC wires, such as the Folai Wall Scanner. If you want to play it safe with electrical wiring, this stud finder will give you extra peace of mind while working.

But detecting AC wires isn’t all this wall scanner is good for; the finder includes five different scanning modes for woods, metals, and AC wires hidden up to 2 inches behind the walls. Using the scanner is a breeze. The large LCD display indicates the depth and direction of studs or other items inside the walls, and the device’s audible beeps let you know if you are moving closer to or further away from the hidden object.

For an accurate and quick stud finder, we recommend the Franklin Sensors 710 Precision Stud Finder. It can detect more than one stud at once, and the deep scan mode allows you to detect studs in thick walls. If you’re looking for something that costs a bit less, however, the Zircon StudSensor e50 Electronic Wall Scanner is a solid option that still provides reliable results.

What to Look for in a Stud Finder

There are two basic types of sensors used in stud finders: electronic and magnetic.

Magnetic stud finders contain rare earth magnets that don’t actually detect wood inside the walls; instead, they detect the metal in the screws or nails holding the studs in place. These stud finders are fairly inexpensive but won’t show you the exact edges of the stud, and they don’t penetrate into the wall as deeply as their electronic counterparts.

Some electronic stud finders let you adjust the depth to which the sensors penetrate the wall. Typically, studs are buried around 1/2 to 3/4 inches behind drywall, but there are times you want to go deeper to find other hidden objects. Or you’re scanning floors for joists, rather than walls. Many stud finders with this feature can penetrate a surface up to 1.5 inches deep.

While all stud finders detect wood, there are other types of materials that might be hidden behind your walls, including plastic or metal pipes and AC wiring. Many of today’s electronic stud finders have modes for detecting these materials, which is very useful when you’re doing more than merely looking for a stud to support a heavy mirror or shelf.

This article is edited and updated by Michelle Ullman, the tool expert for The Spruce. She has extensive experience not only in writing about all things related to the home but also in carrying out various DIY projects, including landscaping, painting, flooring, wallpapering, furniture makeovers, and simple repairs. For this roundup, she considered dozens of stud finders, looking for those with the most features, the best accuracy, and the highest praise from both product testers for The Spruce and actual buyers of the stud finders.