The 8 Best Tower Fans That Cool Down Any Room

The tower fan with top marks is the Seville Classics UltraSlimline

Tower fans are a great way to cool your space and reduce the dust and allergens in the air. We examined numerous floor fans and evaluated them for the most desirable attributes, including out-of-the-box readiness, ease of controlling, and noise level.

Our top pick is the Seville Classics UltraSlimline 40 in Oscillating Tower Fan . We liked its range of settings options, quiet operation, and handy remote control.

Here are the best tower fans with the cooling and features you need. 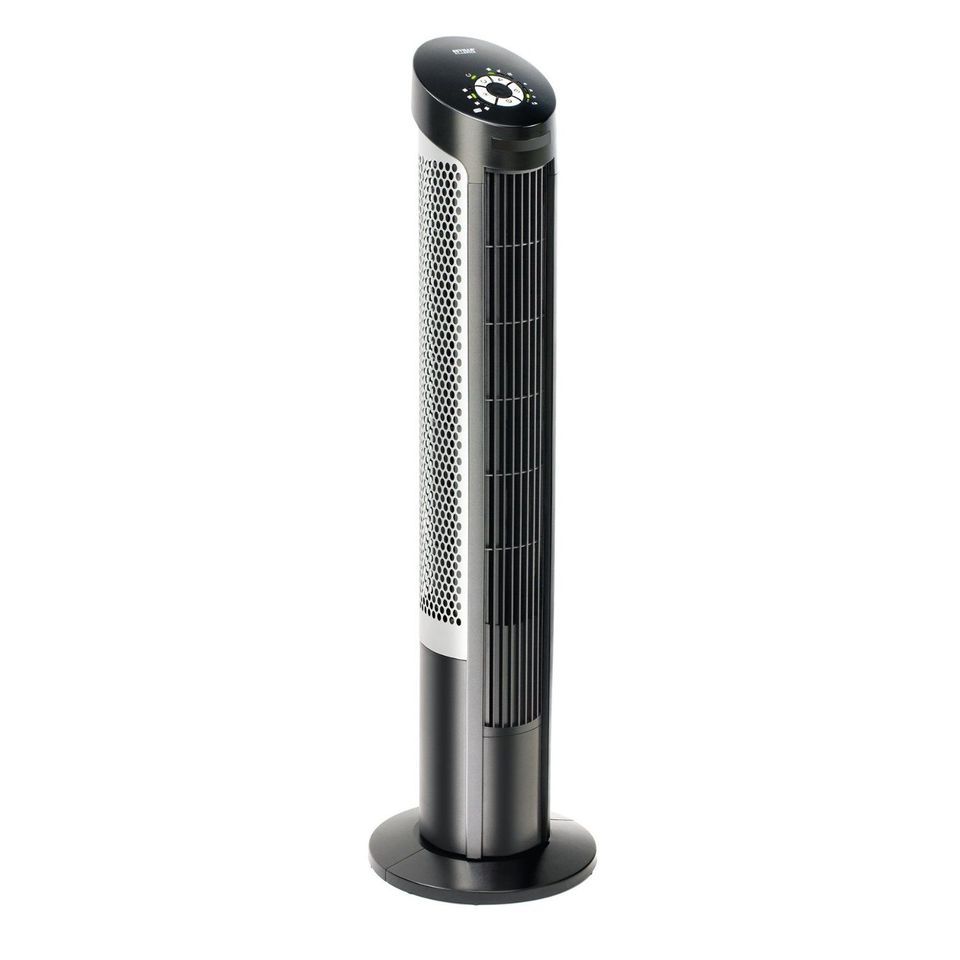 Courtesy of Amazon.com.
View On Amazon View On Wayfair View On Overstock
What We Like
What We Don't Like
Seville Classics' UltraSlimline Tower Fan Blew Us Away

If you want the cooling power and design of a tower fan without taking up a lot of space in your room, the Seville Classics UltraSlimline 40 in. Oscillating Tower Fan is just what you need. It is 40 inches tall but takes up less than one square foot of floor space. This is a very efficient cooling machine with a variety of settings, earning top marks on our list.

Our tester raved about the fan's control features. It has four settings, including an energy-saving Eco setting. It oscillates 75 degrees and has a timer for auto-shutoff. You can customize all these settings on the fan or by using the included remote control.

This fan requires some assembly. Our tester said the only tricky part was making sure the cord was threaded correctly through the base. Once assembled, the fan does best on a hard floor or surface. You can use this tower fan on carpet, but if it is especially plush, it may start to wobble, make more noise, or even fall over on the highest settings.

"With its four-speed settings (high, medium, low and “eco”), the Seville Classics UltraSlimline outperforms other fans in its class. The lowest eco setting provides a gentle breeze of air and minimal noise. The higher settings ramp up the airflow and the noise. The airflow is powerful enough to cool even the hottest room, circulating ambient air and pushing cold air from our air conditioner. You also can choose to have the fan oscillate along a 75-degree arch to ensure everyone in the room gets relief from the heat."—Kelly Hodgkins, Product Tester

It’s hard to beat the budget-friendly price of the Comfort Zone 29 in. Oscillating Tower Fan. For less than $50, you get three speeds, 65 degrees of oscillation, and great cooling power. This fan is smaller than some other tower fans, at just 29 inches tall. It may not reach as far but is a great option if space is limited. It comes in white and has a front dial to control the settings.

The Comfort Zone tower fan also is surprisingly quiet for its budget-friendly price—a great feature for this top budget pick since fans this quiet usually cost much more. Due to its settings, quiet operation, and compact size, it’s ideal for a bedroom, nursery, office, or other small room. It may not be powerful enough to efficiently cool a large living room or family room. If you want to use it in a larger room, consider purchasing two and setting up customized zones. 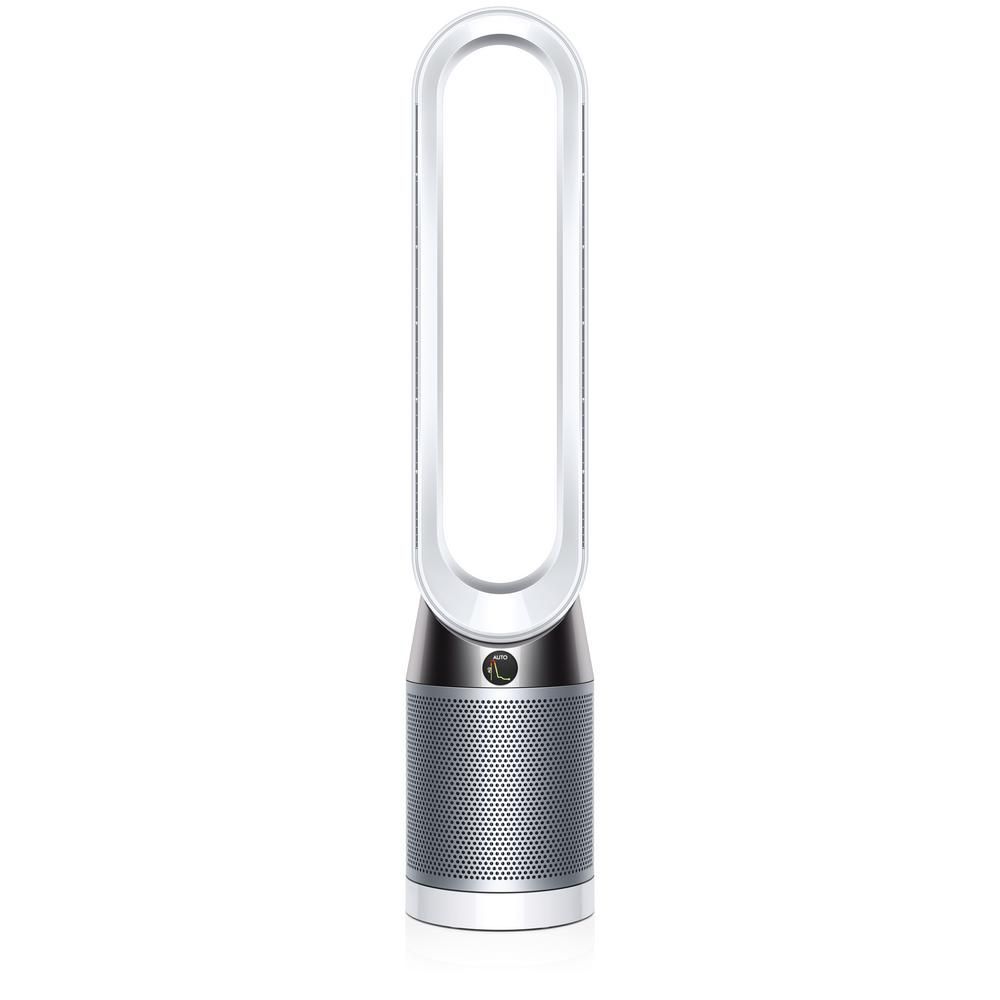 It's probably no surprise that Dyson’s popular Pure Cool Purifying Tower Fan made our list and that it appeared as the best splurge option. This is a pricey tower fan, but the advanced air purifying features, quiet operation, and sleek design continue to make it a fan favorite and earn top marks. The included HEPA filter removes particles as small as 0.3 microns from the air as it circulates air through your room. It oscillates up to 350 degrees and has a display screen that gives you real-time updates about the air quality in your room.

With the optional Dyson app, you can connect your tower fan to your device and change settings remotely. You can also monitor air quality, get updates about filter performance, and even find out when it’s time to reorder filters. If you connect it to your Android, Alexa, or iOS home device, the smart technology can order the filters for you. All you need to do is sit back, relax, and enjoy clean air and cool comfort.

The only drawback to the Dyson tower fan is the price, although that’s a big consideration, considering that it costs at least four times as much than most other options available. If it’s in your budget, you should be ecstatic with the performance, settings, and smart device compatibility of the Dyson Pure Cool fan. 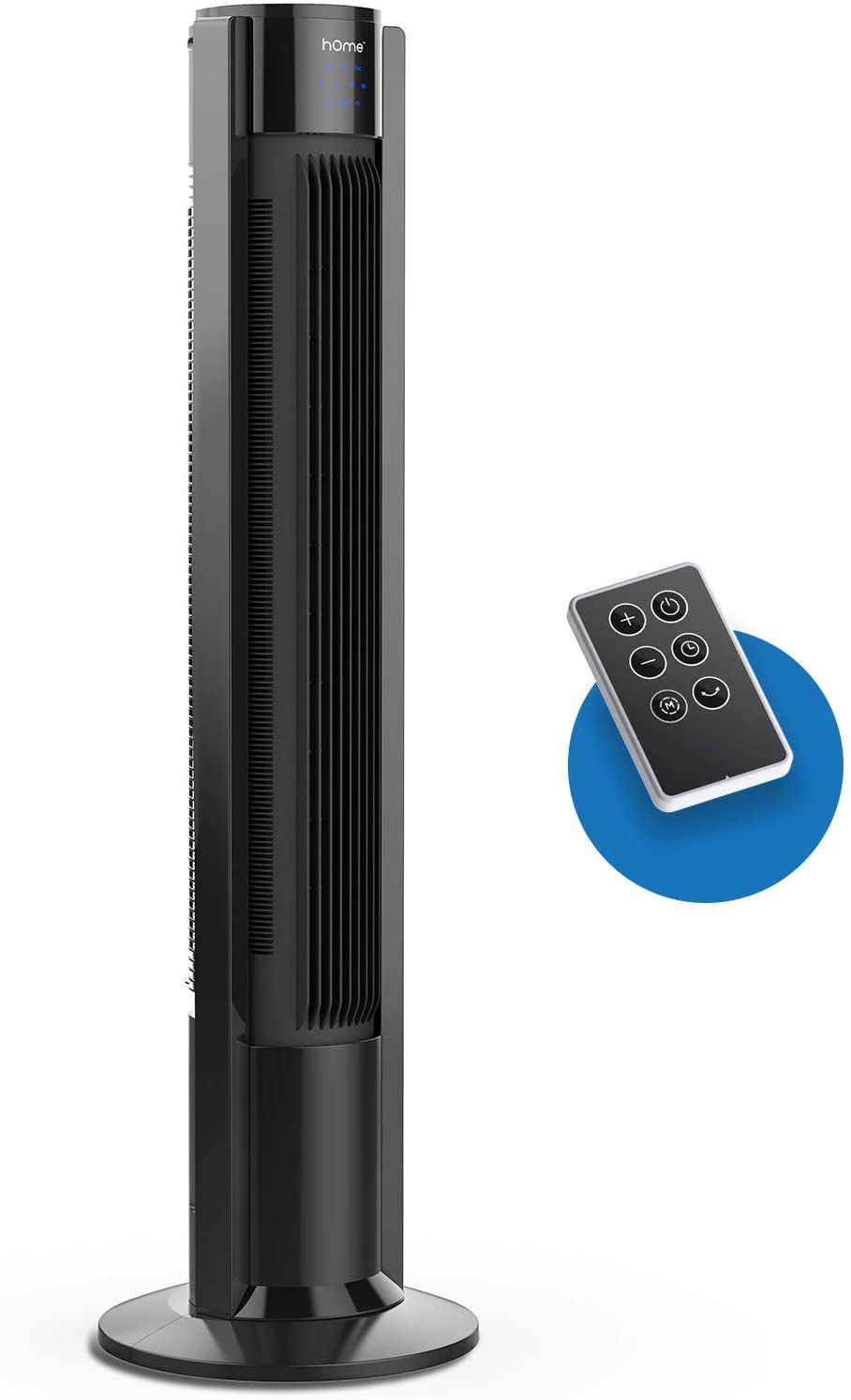 Another reasonably sized tower fan for most rooms in your home, the hOmeLabs 40-inch Oscillating Tower Fan has a slim design and three modes of operation: natural cooling, sleep, or oscillating. Each mode has three speeds for great customization. You can control all of these settings using the control panel or remote. It even has a magnetic storage position for the remote when not in use, so you never have to worry about losing it. The fan does require some assembly, but most customers agreed it was easy to do.

The fan snaps onto the included base to keep it stable. It’s best on hard floors or surfaces, especially when you operate it on the highest speeds. It’s not the cheapest nor most expensive fan on our list. While it is a bigger purchase than some other options, it provides a fantastic value and cooling performance.

The Best Air Conditioners To Keep Your Home Cool

Much of the noise from a tower fan comes from the fan wobbling on the base. That’s why the innovative wraparound design of the Vornado 184 Whole Room Air Circulator Tower Fan is so pleasing: It reduces wobble and the noise associated with it, even on high settings. The fan is powerful enough to cool large rooms, up to 100 feet from the fan, without the noise of a big motor. You can adjust the speed and other settings with the included remote, another perk for using it in a large space.

The Vornado fan is a bit pricey but worth the money. The contoured air outlets ensure that cooling power gets to every part of a large room, something most other fans struggle to do. If you want to cool a large space, this is the best option by far. It is also one of the quietest, with the anti-wobble design and an auto-shutoff sleep option. It doesn’t oscillate, but it doesn’t need to do so to reach all areas of the room.

The 8 Best Combination Fan and Heaters of 2022

Adjusting with a handheld remote control is a top feature of the Hunter 36-inch Digital Oscillation Tower Fan. It has three settings, three wind modes, oscillation, and a timer that you can all control using the included remote, or the digital display on the top of the fan. At 36 inches, it’s not the largest or most powerful on our list but is ideal for a smaller room such as a bedroom or office. With the remote, you don’t even need to get out of bed or stop working to adjust the cooling in your room!

This tower fan also has a timer you can set for auto-off for one, two, or four hours—another great feature for a room where you want to stay cool without focusing your attention on your fan. Its integrated carrying handle makes moving the fan easy and convenient. It is a bit pricey considering its smaller size. But the performance, settings, and remote control make it well worth the cost.

The impressive eight settings on the Honeywell Quiet Set Oscillating Tower Fan offer something for every need, so you can get the most restful night’s sleep. The first four quiet settings are specifically designed for sleep and include Sleep, Whisper, Calm, and White Noise. An optional oscillation setting allows for even greater customization. You can adjust everything on the top of the fan and even set a timer to turn the fan off after one, two, four, or eight hours.

The fan comes with a remote control, a nice addition that makes adjusting it even more convenient. The price point is good, especially when considering all its settings. It is quiet enough to allow for sleep but still deliver powerful cooling and air circulation. You need to assemble the fan, connecting it to the base, upon delivery; most customers said assembly was super-easy. 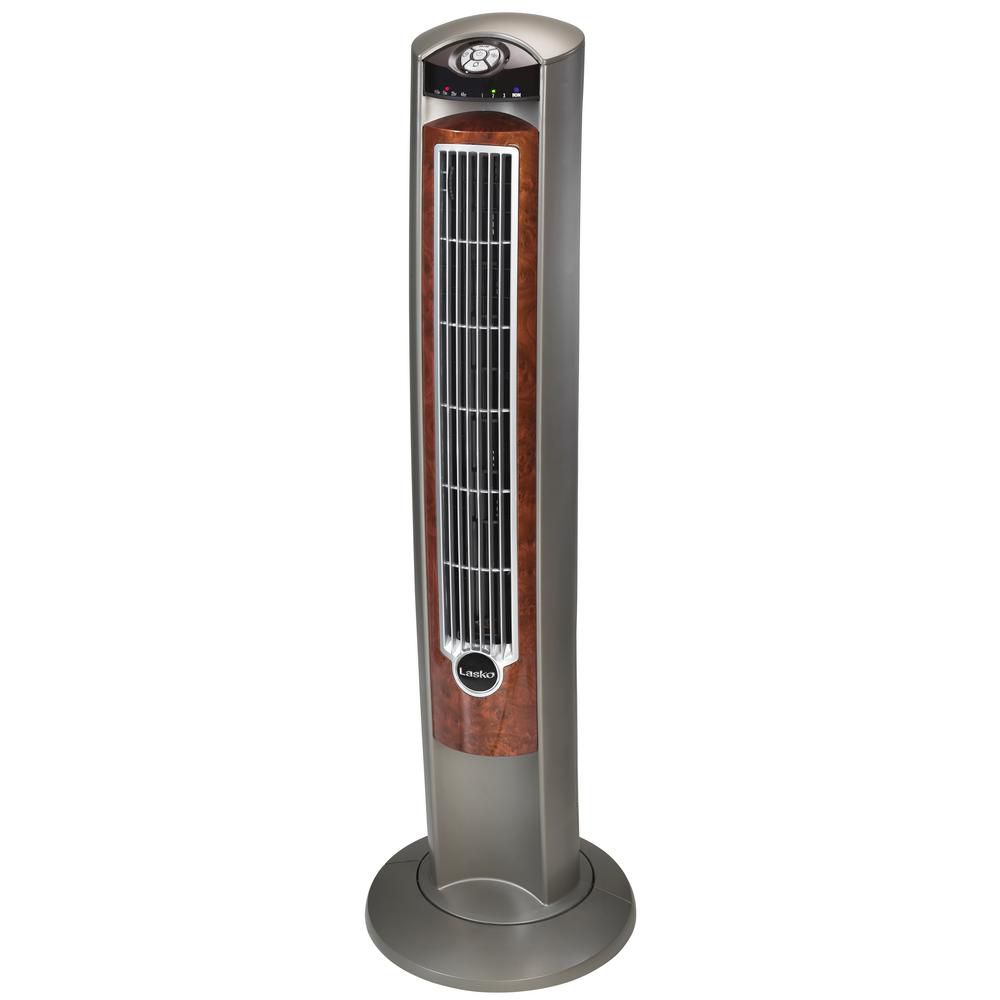 Did you know that you can take the air cooling of a tower fan from room to room? The Lasko Wind Curve Tower Fan is ideal for portability because of its integrated carrying handle. It is slim enough to fit in a variety of spaces and has three settings that can be adjusted via the included remote control. This fan oscillates, delivering cooling power throughout your room.

It is 15.5 pounds, not the lightest on our list. But it is still manageable, and the carrying handle makes it easy to move around your home. This is one of our taller tower fans, which helps deliver cooling power to higher spaces, where warm air likes to stay. Although it takes up a bit more space in the room, its slim design helps keep the overall footprint small.

Our top pick is the Seville Classics UltraSlimline 40 in. Oscillating Tower Fan. It has everything you want from a tower fan, including multiple settings, speeds, oscillation, and a remote control. It’s also available for a price that should work with most budgets. If you have more to spend, the Dyson Pure Cool Purifying Tower Fan is worth noting. It has smart device compatibility, air purifying technology, and cooling power that isn’t available in any other tower fan. It is expensive but performs so well that many customers are happy with their purchase.

What to Look for in a Tower Fan

Generally, tower fans have smaller footprints than other types of fans, but within this category, height and size can make a difference. A tower fan that stands on the floor should be powerful enough to move air throughout a room. One designed for tabletop use might be better suited for personal use or as a room's supplementary (rather than sole) cooling device.

A tower fan's cooling power doesn't just rely on its size—its array of speed settings makes a major difference. Most often, a wider range of speeds makes for a more versatile machine. You can use a tower fan simply to create white noise, add a gentle breeze, or noticeably cool an entire room. A fan with fewer speeds might not provide you with the same options, but in exchange offers simple air circulation.

If you intend to cool down an entire room with your tower fan, make sure to check its range of oscillation, or whether it oscillates at all. Oscillation is important when it comes to complete air circulation. So this feature should be a priority, unless you plan to use your tower fan on one fixed area.

This article was researched and written by Katie Begley, a freelance writer specializing in home and family products. Katie has been writing for The Spruce since 2019. Living in Hawaii, Katie became a tower fan enthusiast for keeping her home cool and comfortable while saving on expensive electric bills. Her top recommendations on this list, some of which she’s used in her own home, consider value, performance, and features such as remotes and timers to make cooling rooms a breeze.