The Best Wireless Doorbells to Add to Your Home

Our favorite is the Honeywell Series 9 Portable Wireless Doorbell

Camryn Rabideau
Camryn Rabideau is a freelance writer specializing in decorating and design. She covers home products for The Spruce.
Learn more about The Spruce's Editorial Process
Reviewed by
Larry Campbell

A wireless doorbell is perfect for novice DIY enthusiasts, apartment dwellers, and homeowners because installation is simple and flexible. “Wireless doorbells are easy to install as they do not require electrical wiring, offering greater freedom for where the homeowner can install the doorbell,” says Kaleigh Bueckert-Orme of Ring.

We researched top options on the market and evaluated them on their battery life, installation, and extra features. Our top pick, the Honeywell Series 9 Portable Wireless Doorbell, has a flexible 450-foot range, and the receiver supports up to six additional doorbells.

Here are the best wireless doorbells. 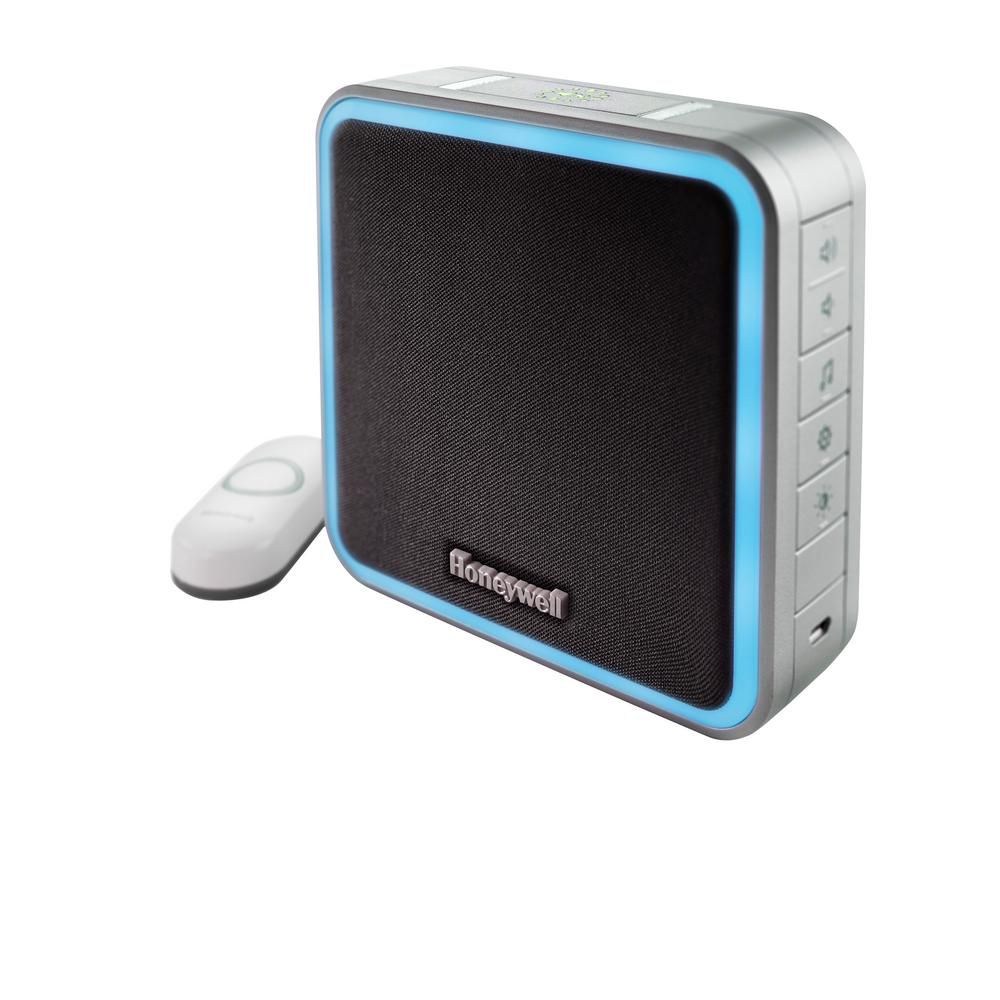 Who else recommends it? BestReviews and Bob Vila also picked the Honeywell Wireless Doorbell.

The Honeywell Home Series 9 Wireless Doorbell is our top pick because its easy-to-install design offers multiple customization features. The unit includes a portable receiver and a push button with mounting hardware.

The square receiver, which can last for up to five years on four C batteries, has a range of up to 450 feet for flexibility when installing the push button. It has an LED halo light, which you can program with seven color alerts, and adjustable volume and chime settings to suit your preferences. There are eight chime options to choose from, and you can mute the receiver temporarily or permanently if desired. You can even download additional chime sounds to customize its ring. The receiver can also connect to up to six transmitters, allowing you to add more doorbells.

One of our favorite features is the portability of the receiver, so you can always hear the doorbell ring, even from your home office or backyard. A receiver wall mount also is included if you’d prefer to have the receiver in a permanent place. Although portability is a great feature, there is a lag between the button and the receiver. Despite this minor technical delay, this doorbell is our top choice because of its long-lasting battery life and easy-to-use features. 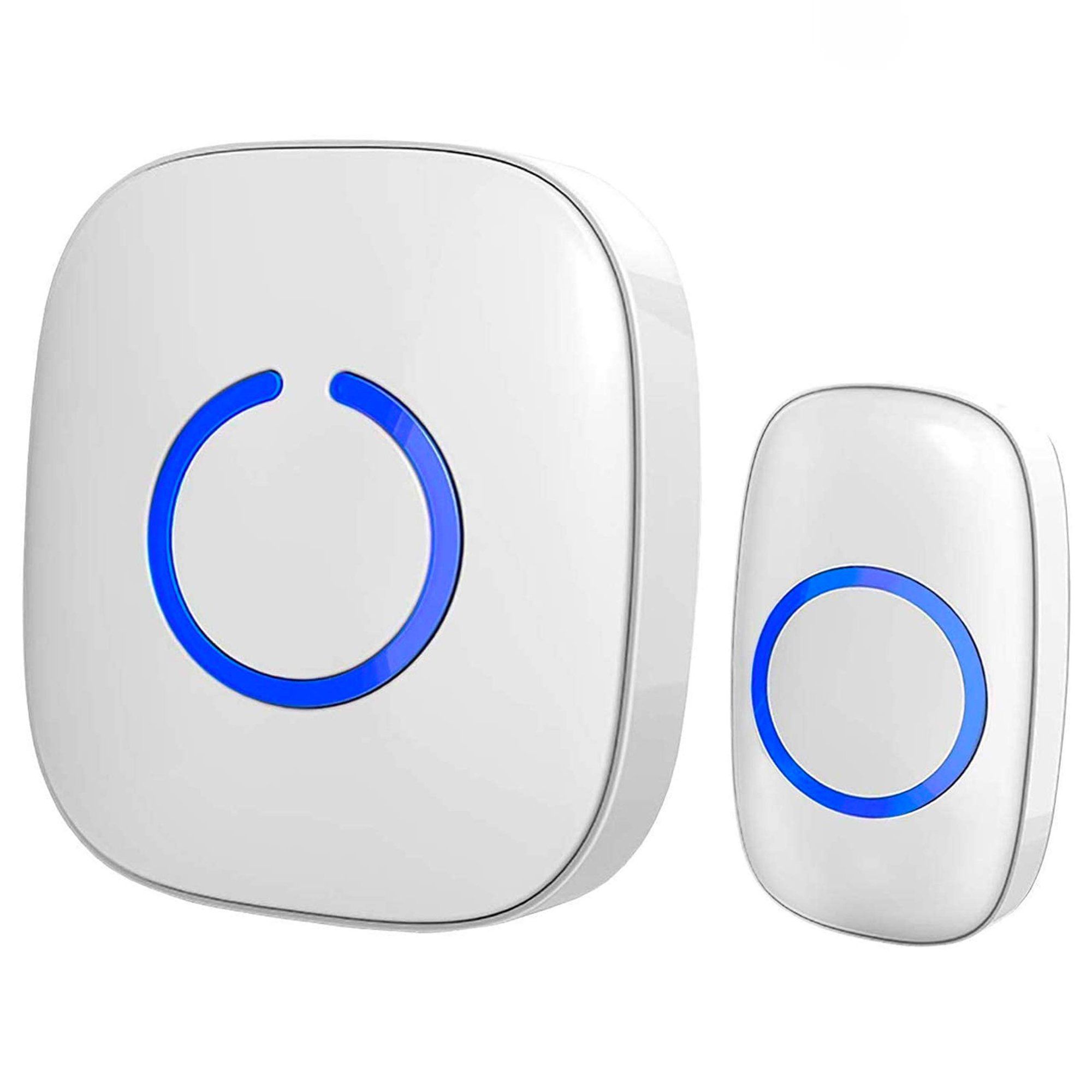 The SadoTech Wireless Doorbell is a budget-friendly choice that’s easy to install and offers lots of versatility. The push button itself runs on a 23A battery (included), and the receiver plugs right into an electrical outlet. The two units have an operating range of over 1,000 feet, and the doorbell comes in several colors to match any decor.

This affordable wireless doorbell includes more than 50 chime options, but the downside is that you have to cycle through them all to select the one you want. There are four volume levels, as well as a silent mode, and the doorbell comes with both screws and heavy-duty adhesive to give you multiple installation options. 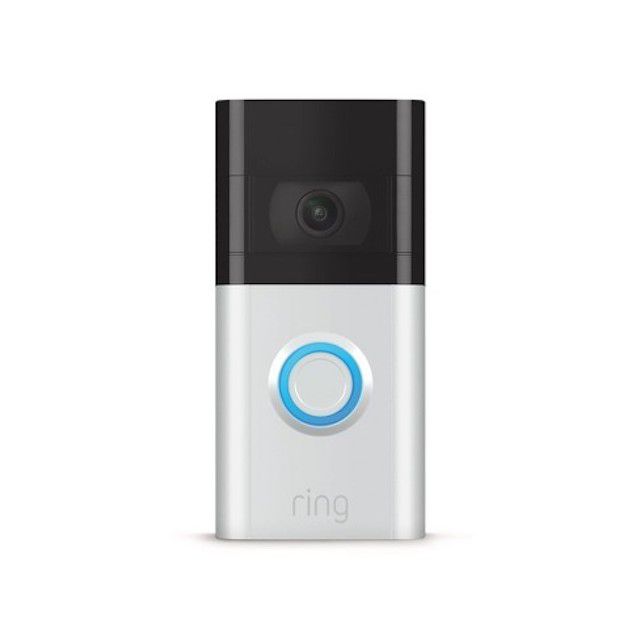 Smart doorbells are an increasingly popular investment for homeowners, as they allow you to monitor your home even when you’re not physically there. One of the best smart wireless doorbells available today is the Ring Video Doorbell 3, which streams 1080-pixel high-definition video straight to your smartphone and sends you alerts whenever something is at your door.

You can use this video doorbell wirelessly with its rechargeable battery pack, or you also have the option to hardwire it into your home. It supports two-way audio, allowing you to speak to whoever is at the door, and you can even connect it to Alexa to hear announcements when the doorbell rings. However, keep in mind that you’ll have to subscribe to a Ring Protect Plan (which costs $3 monthly) if you want your doorbell to record and save videos. Without it, you can only view live videos through the device.

If you want to see who’s at your door without opening it, the Arlo Essential Video Doorbell is the one for you. This video doorbell has a max video resolution of 1536x1536 pixels, and it offers a 1:1 aspect ratio and 180-degree field of view, allowing you to see more of your property. The Arlo Doorbell syncs up to your smartphone for operation, and you can hear and speak to visitors with two-way audio or pre-recorded messages.

The Arlo Video Doorbell has a rechargeable battery pack that can last for up to six months, or it can connect to existing doorbell wiring. There’s also a built-in siren you can trigger to scare off intruders, if needed. If you want to store video recordings, you have to subscribe to Arlo Secure, which costs $2.99 per month for one camera.

The 9 Best Doorbell Cameras of 2022 to Guard Your Home 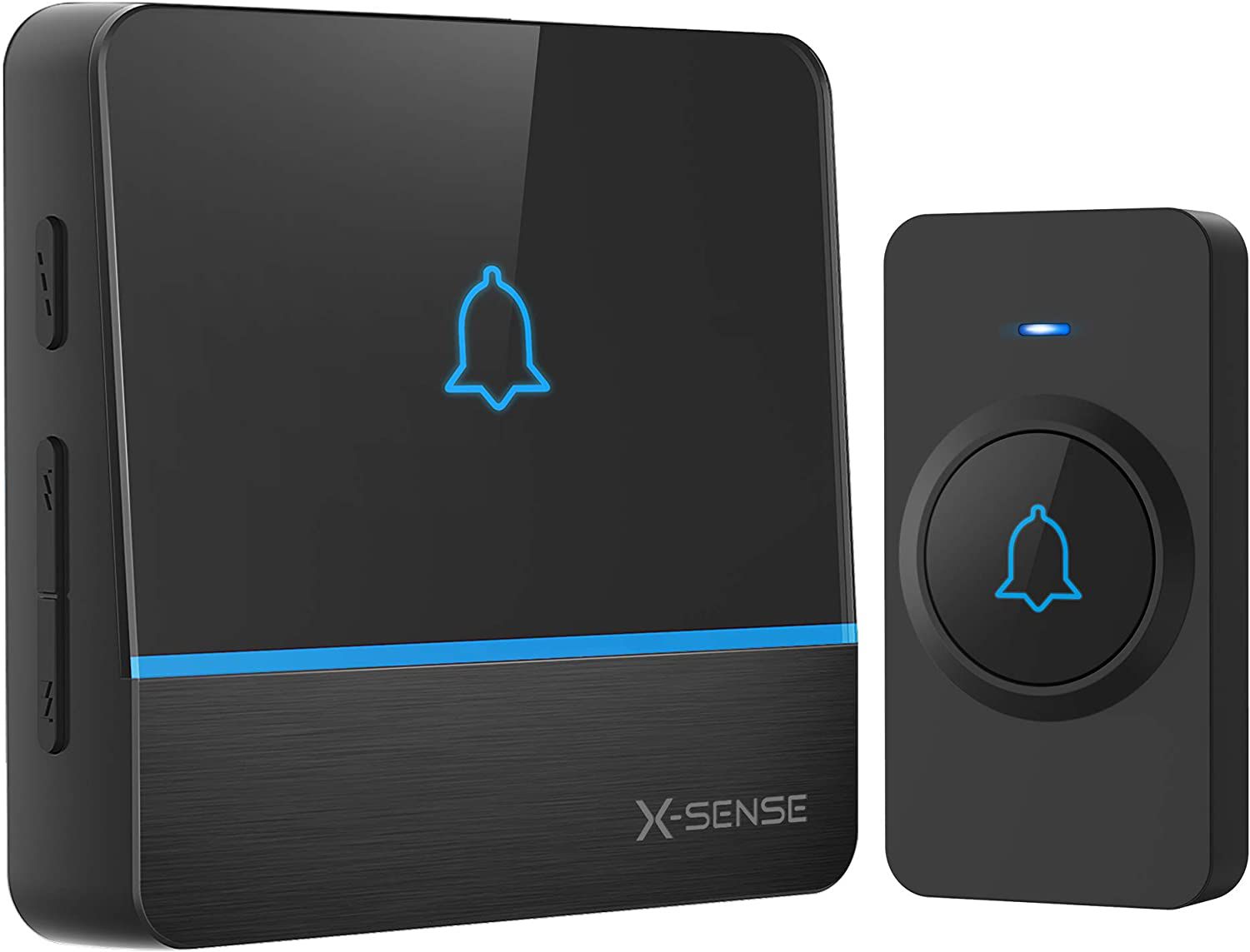 If you have a large home or want to be able to hear the doorbell when you’re out in the yard, the X-Sense Wireless Doorbell has an impressive 2,000-foot range. You can get it with either one or two doorbells, which come with both adhesive patches and screws, depending on your mounting preferences. The doorbell itself runs on CR2032 batteries, which can last for up to three years, and the receiver plugs into an outlet.

This doorbell offers a whopping 56 chime sounds, as well as five volume levels. A blue LED light gives you a visual cue that someone is at the door, and the unit even has a memory function that preserves your settings in the case of a power outage. 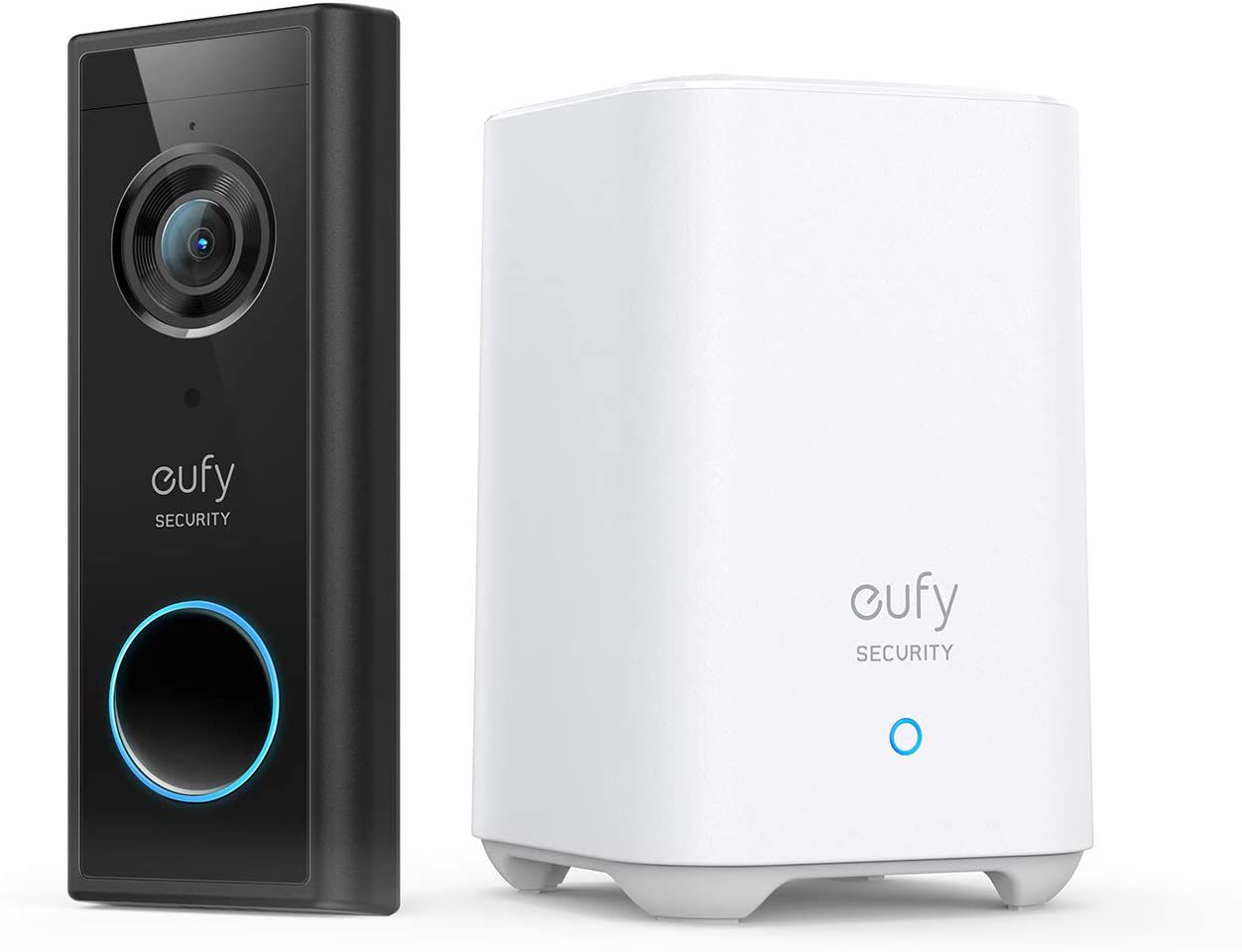 Many video doorbells require a monthly subscription fee if you want to record video footage, but the Eufy Battery-Powered Video Doorbell is a subscription-free option that offers encrypted local video storage instead. This wireless doorbell records in 2K resolution, and its wide dynamic range capture clear details, even when the subject is backlit.

The wireless doorbell is simple to install, and the unit comes with a “Homebase” that stores video footage and also acts as a chime. You can sync the unit with Amazon Alexa or Google Assistant, and two-way audio and prerecorded messages allow you to interact with visitors.

The 7 Best Home Security Systems of 2022 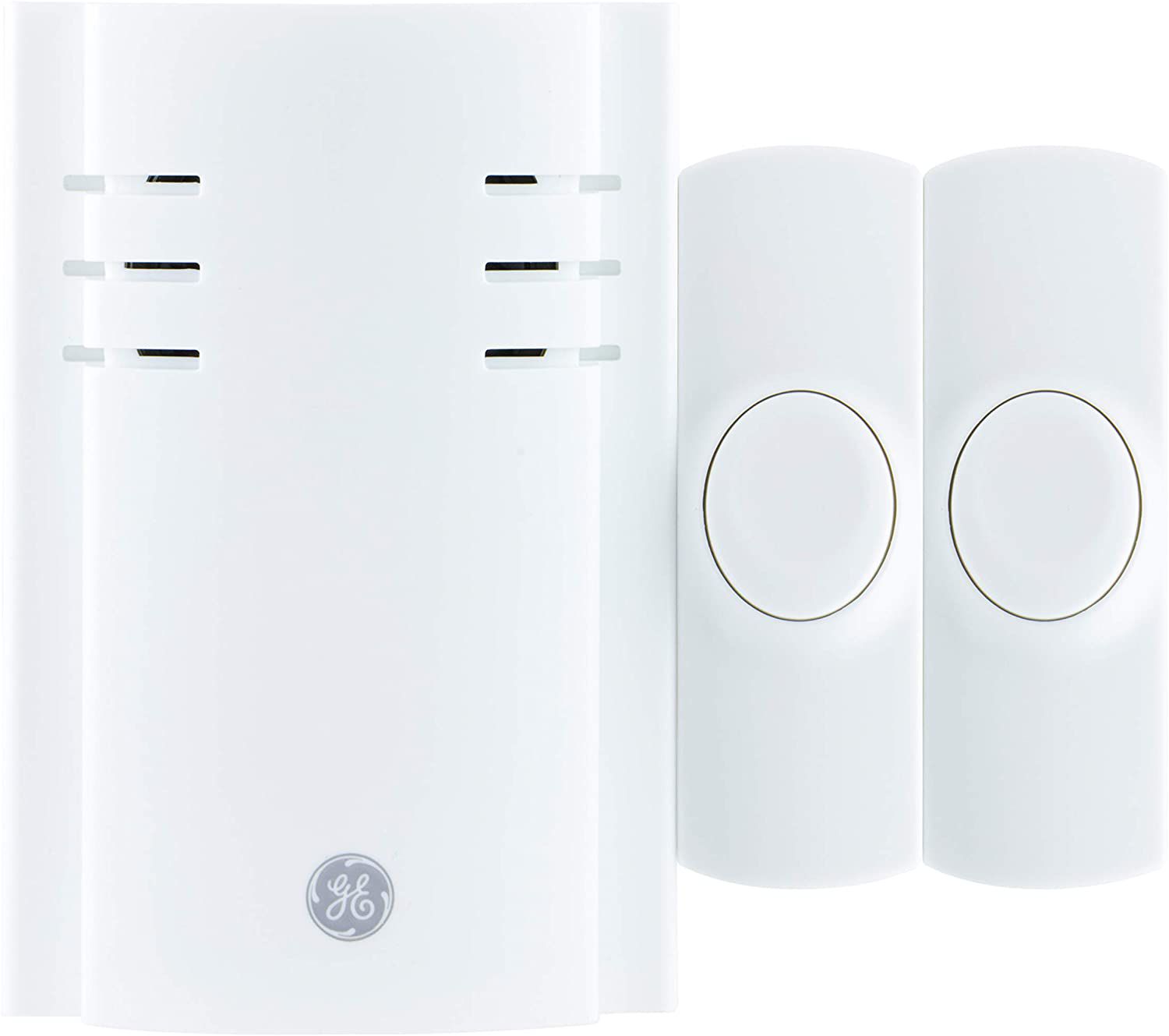 For homes with multiple doors, the GE Wireless Doorbell Kit comes with two push buttons, each of which you can use with the receiver, which plugs into an outlet. CR2032 batteries power the buttons, and they can be placed up to 150 feet away from the main unit.

This doorbell offers eight different chime options, including a traditional ding dong and several fun melodies. There are four volume settings, and the doorbells arrive already paired with the receiver, making it quick and easy to set up. Plus, you can expand the system with up to four doorbells, if needed. 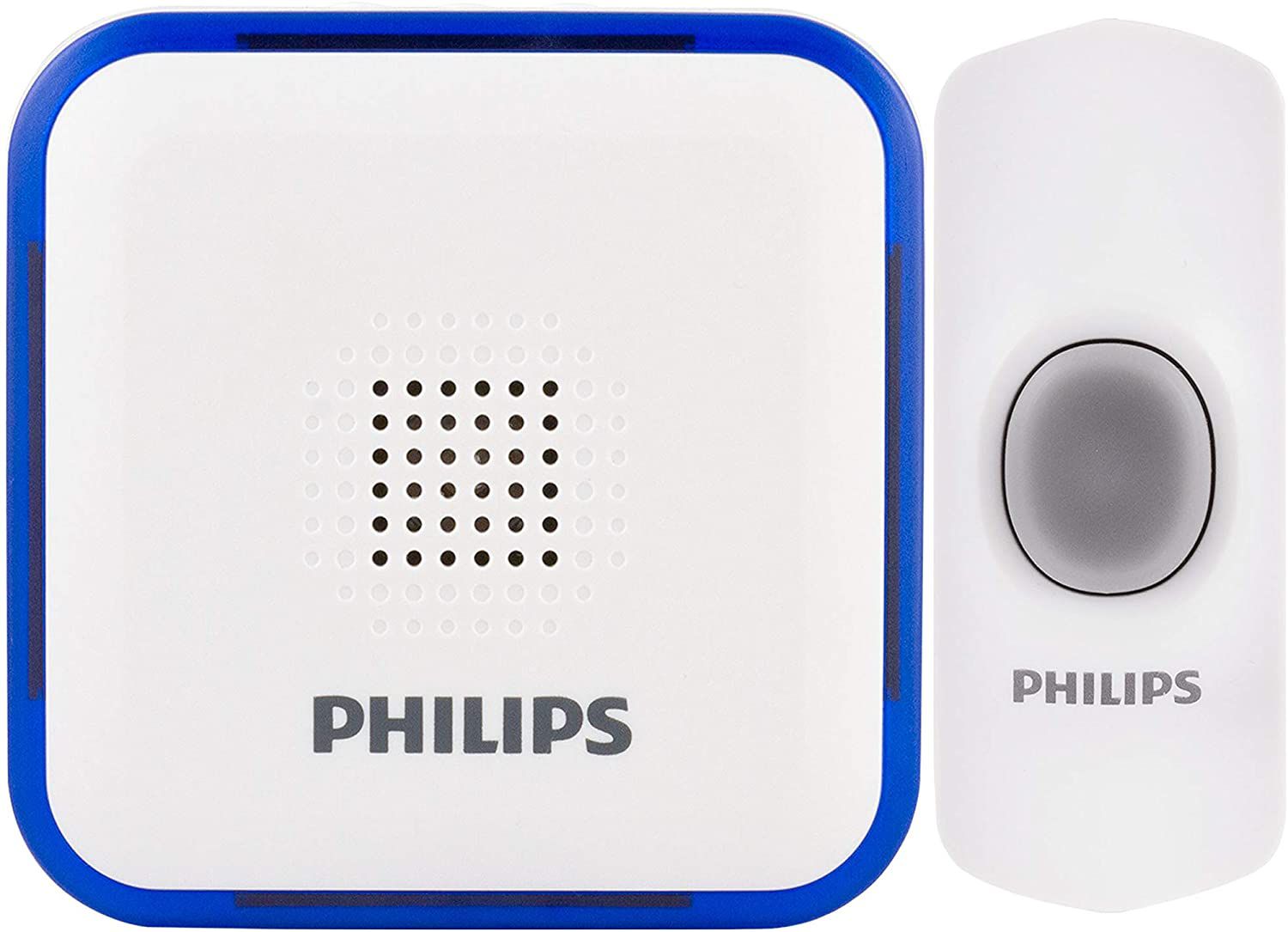 If you sometimes miss the chime of your doorbell, the Philips Doorbell has a built-in LED light on its receiver that illuminates with button presses, giving you a visual cue that someone is at the door. This doorbell kit has a 150-foot range between the push button and receiver, and you can expand the system to include up to four buttons.

There are 32 different doorbell chimes to choose from and four volume levels, the loudest of which is 95 decibels. The receiver itself is battery-powered for portability, and it has a flat base that lets you place it on your desk, counter, or table.

For a no-frills wireless doorbell that’s easy to install and operate, you can’t go wrong with the Honeywell Series 9 Portable Wireless Doorbell. This unit has a portable receiver with a range of 450 feet, and it offers eight chime options and impressive battery life. If you’re looking for something more high-tech, the Ring Video Doorbell 3 is a top-rated smart doorbell that streams high-definition footage straight to your phone, and it even allows you to talk to whoever is at the door.

What to Look for in a Wireless Doorbell

Many people choose wireless doorbells because they can’t have a hardwired model in their home, and you’ll want to ensure you can properly install the wireless option you select. Some doorbells must be screwed into the wall—not always feasible for renters—while others can be temporarily mounted using double-sided adhesive.

“Some doorbells have a built-in battery, while others will have a battery pack that is removable,” explains Bueckert-Orme. “This means some doorbells will need to be taken off entirely to charge, while others can stay installed.” Further, doorbell receivers are either battery-powered or plug-in, the former of which can easily be moved around your home if needed.

Most wireless doorbells have a range limit between the doorbell itself and the receiver, and you’ll want to take this into account when selecting the best model for your needs. The standard range of these products is between 150 and 500 feet, but if you have a larger home or want to bring the receiver outdoors with you, you may want to opt for a model with a longer range.

“Consumers should look at which features are most important to them on a wireless doorbell,” says Bueckert-Orme. Common features on wireless doorbells include multiple chime options, volume adjustment, and light-up receivers. On more high-tech models, you’ll also find features such as high-definition video capture, two-way audio, motion detection, and even security sirens.

This article was written by Camryn Rabideau, a freelance home writer who has contributed to The Spruce since 2017. While putting together this list, she considered each product’s range, design, and chime options, as well as how easy the units were to install. She also looked at factors such as battery life and video capabilities to find the best options for every home.

For more information about wireless doorbells, she spoke to Kaleigh Bueckert-Orme of Ring, one of the leaders in the wireless video doorbell space, about the benefits of this technology and how to use it optimally within your home.