In the world of TikTok cleaning, there are some amazing hacks and there are some not so amazing ones. But while the bad ones simply don’t work, the worst ones are downright detrimental. This video of a ‘laundry stripping’ technique involving Borax has gone viral, largely in part because supporters claim that Borax is a “green” cleaning product.

But does the use of one naturally occurring chemical make a practice green, or even safe? We investigated and learned that the answer is… well, complicated.

Learn How to Start Eco-Friendly Cleaning in Your Home 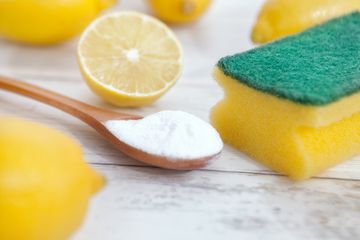 What Is Laundry Stripping?

As a cleaning concept, laundry stripping isn't exactly new. It's basically a method of soaking your towels and/or sheets in a specific mixture meant to remove or "strip" your textiles of any gunk that might have collected deep within the fibers over a period of time—think detergent, body oils, and other tiny particles that could potentially remain after regular washing. Experts can't quite agree on whether it's actually an effective way of cleaning, or if it's even necessary.

As shown in the video, most laundry stripping calls for a tub filled with hot water and a combination of baking soda, laundry detergent, and Borax.

Borax is a boron compound and a salt of boric acid. It comes in the form of a white, crystallized powder that dissolves easily in water, and is commonly used as a cleaning product to remove mold, odors, and stains. Because it's naturally occurring, many assume it's a great, green alternative. But what does that mean, exactly? And is it toxic?

We asked dermatologist Dr. David McDaniel to share his thoughts from a medical perspective. His first point was that the particular type of Borax in the video is sodium tetraborate. This is different from boric acid, which is “much stronger and more toxic than borate.”

But Borax itself isn't non-toxic. Despite the fact that it's often used as a food additive and in some cosmetics, it's a chemical that “has also been widely used as a pesticide,” particularly for ants and various fungi.

Noting that it's been banned for most uses in the UK, Europe, and Canada, Borax as a cleaning product requires "appropriate precautions,” said Dr. McDaniel.

One of his biggest concerns with the viral TikTok video is that the proper safety considerations aren’t being followed. Noting the cat featured on-screen later, Dr. McDaniel said, “I think that having an open tub for five hours concerns me in this regard, especially in busy homes with children and pets.”

You also might have noticed that the TikTok-er isn’t wearing gloves, and this is another no-no. One of the proven toxicity issues for Borax includes skin irritation. For this reason, “exposure of open wounds or breaks in the skin should be avoided.” Dr. McDaniel also warned against eye exposure and inhalation. “I would be especially careful about breathing the powder or dust when using it.”

Additionally, “there are some concerns about exposure and disruption of hormones.” Though these concerns are “not well-defined,” according to Dr. McDaniel, they are something to consider.

One of the reasons the video has spread so far is that many claim that Borax is a ‘green’ product. “To the extent that Borax is not a phosphate or a chlorine-type cleaning product, that is correct. It is ‘naturally occurring. However ‘green’ does not necessarily mean ‘safe,’” Dr. McDaniel told us.

Naturally occurring also doesn't mean its use has zero impact on the environment. To make Borax, the mineral boron is extracted from the earth through open-pit mining. This involves drilling, explosives, and transport, and leads to major land degradation, as well as air, noise, and water pollution. All decidedly not eco-friendly.

Is There a Better Way to Laundry Strip?

While searching for an alternative to the chemical mixture featured in the video, we connected with the team behind Guppyfriend—a washbag that catches microplastics during your wash cycle. The company also prioritizes educating the public on eco-friendly laundry techniques.

Upon learning about the concept of laundry stripping, Julia Krippendorf, Guppyfriend’s Communications Manager, said, “It doesn’t look very efficient, to be honest!”

But if you really feel like laundry stripping is something you need in your life, Julia suggests finding a biodegradable detergent. Unfortunately, this involves more than just glancing at a label, because even some eco-friendly brands might still contain certain toxins and liquid plastics. The best you can do is study the ingredients. "Avoid perfumes,” advised Julia. “And any ingredient with ‘poly’ in the name is probably not good.”

If you’re confident that you have a truly eco-friendly mixture involving biodegradable detergent, then Julia had one more tip. “Use a basin. The tub is a waste of water!”

By using a basin, you can then “filter the wastewater [through a microplastic filter like Guppyfriend] before you drain or flush,” said Julia. At the end, collect all of the fibers caught by your microplastics filter and save them in an air-tight container, until you’ve collected as many fibers as you can. Then, simply toss the entire container so that none can escape and further pollute the environment.

Unfortunately, in our search for truly eco-friendly alternatives, we learned that the rise in 'greenwashing' by brands makes it hard to know if you're truly going green. This marketing technique is used to deceive consumers by providing false or misleading information to make a company sound eco-friendly. If you take a look at the Borax packaging, you might notice a few greenwashing red flags––mainly its heavy use of the phrase 'all-natural.' Which, as we already know, does not mean safe.

As an alternative, Guppyfriend created a Wash Guide to help people further ensure they’re washing their clothes in a sustainable, eco-friendly way. One of the major tips is to use cold water, which, it should be noted, automatically rules out laundry stripping as a viable, environmentally friendly option when it comes to cleaning.

While it's not the solution we need to save the planet, being mindful of how we clean is more important than ever.

The 8 Best Green Laundry Detergents of 2021
Article Sources
The Spruce uses only high-quality sources, including peer-reviewed studies, to support the facts within our articles. Read our editorial process to learn more about how we fact-check and keep our content accurate, reliable, and trustworthy.