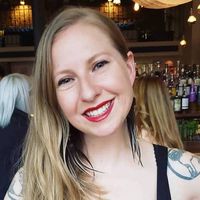 Linnea Covington
Linnea Covington has been writing about food for over a decade in Tasting Table, New York Magazine, and more, and she has no plans on stopping. From farmers' markets to award-winning restaurants, if the eats prove good, she's there, often trailed by her two young boys.
Learn more about The Spruce's Editorial Process

Brooklinen’s All-Season Down Comforter is one of the best on the market. If you want to feel like you’re staying in a luxury hotel every night, this is the bedding for you.

Buy On Amazon Buy On Brooklinen
5

Buy On Amazon Buy On Brooklinen
In This Article

We purchased Brooklinen's All-Season Down Comforter so our writer could put it to the test in her own home. Keep reading for our full product review.

In recent years, a number of direct-to-consumer bedding companies have come out of the woodwork. One of the most popular is Brooklinen, a (you guessed it) Brooklyn-based brand from husband-and-wife duo Rich and Vicki Fulop. When they launched in 2014, the millennial couple was looking to offer hotel-worthy linens for a fraction of the price by selling straight to their consumers, not storefronts. The company’s approach and products—which have expanded to include more bedding, loungewear, bath accessories, and gifts—have since garnered a lot of hype. To see if All-Season Down Comforter delivered on all of Brooklinen’s promises, we picked one up to try in our home. Keep reading for our full review.

Material and Texture: Soft and supple

Brooklinen’s All-Season Down Comforter features a 100 percent cotton sateen shell and 700 fill power down. The cotton is OEKO-TEX certified, meaning that it’s been tested for and found to be free of a range of substances, and the down is ethically sourced from Hutterite Farms in Canada. The fact that Brooklinen is so transparent about its materials is a sure sign of quality and for eco-friendly shoppers, the fact that everything is responsibly sourced is also a major plus.

Baffle boxes ensure that the comforter’s down is kept evenly distributed. Additionally, the feathers are treated with antimicrobials which help cut back on allergens and stop unwanted bacterial growth in order to extend the life of the comforter. In terms of texture, you really can’t tell the comforter has been treated. It’s very soft to the touch and the lightweight sateen stays cool.

While the cotton shell is extremely breathable, the down clusters—which, on the loftiness scale, are quite fluffy—help maintain heat when you’re cold. Brooklinen’s down comforter is available in two weights: Lightweight and All-Season. The first is suited to warm weather and features 600 fill-power while the latter is better for year-round use with an insulating 700-fill power. We opted for the latter in a twin size for our son’s bed and it proved plenty warm enough for the 50-degree winters we typically see in Denver. If you live in New England or the Midwest, where temperatures dip below the 20s, you’ll likely need an additional blanket to keep you toasty, but Brooklinen’s comforter will fare well in most climates and seasons.

We opted for a twin size for our son’s bed and it proved plenty warm enough for the 50-degree winters we typically see in Denver.

One more thing to note about Brooklinen’s warmth and weight: the company uses down clusters, which have a higher fill power but actually weigh less. Down clusters are soft, fluffy filaments that grow under a bird’s tougher exterior feathers. Down clusters, as opposed to individual down feathers, are much softer and more effective insulators. Best of all, they won’t poke through the material.

Sizes: All the regulars are accounted for

Brooklinen’s down comforter is available in three sizes: twin/twin XL (64 x 90 inches), full/queen (90 x 90 inches), and king/California king (106 x 90 inches). We purchased a twin/twin XL for our 5-year-old’s bunk bed so he’d have a “grown up” comforter to replace the tattered Batman one from his toddler days. It fit wonderfully and he had no complaints about the level of fluff!

Brooklinen advises against washing their down comforter too often. Instead, they recommend using a duvet cover (which can be washed every few weeks) so you only have to wash the comforter itself every six months, or so, to prevent dust mites. If you wash it too often, the down clusters will degrade and the comforter will lose its loft. Between washes, you can fluff the comforter outside to get rid of dust and you can spot clean spills and stains with a gentle cleaner like Woolite.

When you do wash it, do so on cold and use the gentle cycle. Make sure it’s washed alone and don’t use too much detergent, either. If you’re using a top-loading machine, put the detergent in the drum before you load the comforter—don’t pour it directly on the comforter. Taken care of properly, Brooklinen says their comforter lasts 5 to 10 years.

Price: Expensive but worth it

While $300 isn’t a small price to pay for a twin-size comforter (or $350 for a queen and $400 for a king), we’d buy this blanket again and again. The comforter is lightweight, breathable, fluffy as can be, and constructed from ethically sourced materials, after all. Plus, with proper care, the comforter can last 5 to 10 years. While a $30 comforter will be easy on your wallet now, you’ll need to buy multiple to get the same length of use.

While $300 isn’t a small price to pay for a twin-size comforter…we’d buy this blanket again and again.

Competition: The battle of direct-to-consumer brands

Buffy Cloud Comforter: Authentic down fill isn’t for everyone. Whether you’re allergic or you just have moral qualms about it, down alternative comforters offer the same level of comfort, just without any feathers. Buffy’s Cloud Comforter is stuffed with recycled fill that’s derived from plastic bottles. That’s not where the eco-friendly considerations stop, either. The shell is constructed from eucalyptus which is grown with 10 times less water than cotton. If you’re revamping your bed on a budget, you’ll also be pleased to find that down alternative costs less than authentic down. Buffy’s Cloud Comforter goes for $160 for a full/queen size.

Parachute Down Duvet Insert: Parachute is another direct-to-consumer brand that’s been collecting praises since it debuted in 2014. The company’s down duvet insert features European white down with 750 fill power and a sateen shell just like Brooklinen and Snowe’s. Parachute’s prices are a little higher with the full/queen all-season comforter going for $399, but the company offers a 5-year warranty that guarantees against defects in materials and workmanship.

Without a doubt, get yours now.

Nothing beats a solid down comforter—especially one that’s ethically sourced and constructed to last. There’s a reason Brooklinen has been racking up rave reviews, so see for yourself the difference their all-season comforter can make in your home.