Everything You Need to Know About Garbage Disposals

Bob Formisano
Bob Formisano
Bob Formisano is a licensed architect and builder with nearly 40 years of experience building new homes and restoring older homes. One of his specialties is repairing old systems dating back to the 1920s, including galvanized water pipes, knob-and-tube wiring, and more. His home repair articles for The Spruce span more than 10 years.
Learn more about The Spruce's Editorial Process
Reviewed by
Richard Epstein

Reviewed by Richard Epstein
Richard Epstein is a licensed master plumber with over 40 years experience in residential and commercial plumbing. He specializes in estimating as well as design and engineering for plumbing systems, and he works for one of New York's largest union plumbing construction companies.
Learn more about The Spruce's Review Board
Fact checked by
Jessica Wrubel

We have come to depend on the garbage disposal as the workhorse of the kitchen. Invented in 1927 by John Hammes, the garbage disposal has remained fairly consistent in its design but has increased in use to the point of becoming a required appliance in just about every kitchen. The following guides will give you all the information you need to select and install new a disposal, use your disposal properly, and even troubleshoot problems and make common repairs to your unit.

How a Garbage Disposal Works

The garbage disposal is mounted to the underside of a sink and is designed to collect solid food waste in a grinding chamber. When you turn on the disposal, a spinning disc, or impeller plate, turns rapidly, forcing the food waste against the outer wall of the grinding chamber. This pulverizes the food into tiny bits, which then get washed by water through holes in the chamber wall. While disposals do have two blunt metal "teeth," called impellers, on the impeller plate, they do not have sharp blades, as is commonly believed.

Things You Should Never Put in a Garbage Disposal

Your garbage disposal is different from your actual garbage can. Not all food scraps and liquids are meant to be poured into your disposal. To prevent clogs and disposal jams, it's important to learn what foods are best left for the trash and what the garbage disposal is meant to be used for. In general, you should not put in tough or fibrous food scraps, potato peels, grease and oil, and pits and other hard objects.

A little troubleshooting of common garbage disposal problems can save you hundreds of dollars in service calls or an unnecessary purchase of a new unit. Most disposal problems are related to jams. A jammed disposal is easy to fix, but ignoring a jam and repeatedly restarting the unit can burn out the motor.

Clogs are most often caused by improper foods, such as grease, potato peels, or hard-to-grind foods going down the disposal. Clogs can occur in the disposal itself, but usually, they appear in the drainpipe downstream of the disposal. The best way to prevent clogs is to keep problem scraps out of the disposal and put them in the trash instead. Also, remember to keep it clean.

Choosing a new garbage disposal can be as simple or as detailed as you'd like to make it. You can head out to your local home center or appliance store and pick up a standard model that will most likely serve your needs just fine. On the other hand, you can research the latest additional features offered on some disposals, such as fancy stainless steel grinding chambers or extra insulation for sound reduction, and narrow it down to a model with just the right bells and whistles. 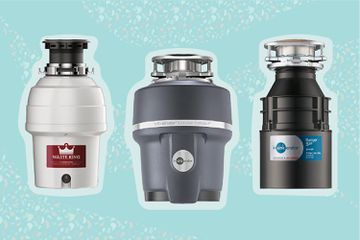 Installing a garbage disposal is fairly straightforward but does require some very basic plumbing and electrical wiring skills. Most handy-ish homeowners can install a new disposal in a few hours.

Removing a garbage disposal is necessary if you are going to replace a sink or a failed garbage disposal. With many disposal models, you can quickly release the motor unit (the heavy part) from the sink assembly and set it aside to simplify the rest of the disassembly and removal.

All situations are different, so if you're researching garbage disposals, pay close attention to the outlets, power supply, and other specific details of your sink and kitchen set-up. These details will determine what kind of garbage disposal you might be able to get, and how simple (or difficult) installation and repairs will be.

FAQ
Where to Shop for Garbage Disposals
The 9 Best Garbage Disposals of 2023
Article Sources
The Spruce uses only high-quality sources, including peer-reviewed studies, to support the facts within our articles. Read our editorial process to learn more about how we fact-check and keep our content accurate, reliable, and trustworthy.