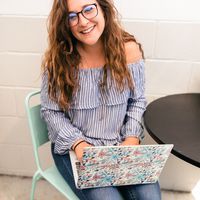 Marisa Donnelly is a lifestyle expert and writer with over a decade of experience sharing her knowledge about what home decor reveals about personalities. She also writes about small business, parenting, and education and her bylines have appeared on HuffPost, Bustle, and BossBabe. Marisa is the founder of an online homeschool program and a support site for blended families.

The bathroom is one of the staple (and perhaps most important) rooms in your home. Unlike a bedroom, which often only has one purpose—for rest—the bathroom is used for everything relating to hygiene, self-care, and relaxation. Plus, it’s the space that everyone (even guests) will frequent regularly, so it’s not only a room for you but for everyone who visits or stays in your home.

As such, creating the design for such an important room is crucial, but sometimes overlooked.

Whether people are aiming to create something trendy and lose the practicality, attempting to make the bathroom ‘homey’ and unfortunately falling short, or landing somewhere in between, here are the bathroom design pet peeves that home stagers, designers, and real estate agents are just sick of seeing.

One of the biggest bathroom design pet peeves that experts share is a general lack of intention for the space. For a room that’s frequented so regularly, it just doesn’t make sense to not take the extra steps to not only make it presentable but usable.

“My biggest pet peeve [with] bathrooms is when they are not given the same level of design attention as the other rooms in the home," says Amber Dunford, Style Director at Overstock.com. "People often forget to include elements such as ambient lighting, decor, or artwork in bathrooms."

"Don’t be afraid to work in a large vase with fresh florals or greenery, interesting artwork, or supplementary lighting like sconces or pendants with warm bulbs to soften the look of this space,” she continues. “Some of the most intriguing and well-designed bathrooms, also recognize the value in designing these spaces to enhance our self-care rituals.”

The bathroom shouldn’t feel like a maze you have to move through just to do your business. When it comes to layout, simplicity should be a priority. However, privacy should never be compromised in an attempt to ‘uncomplicate’ the design.

“When there isn't enough space between the sink and toilet…the bathroom becomes uncomfortable to use,” says Maria Juvakka, Founder of Chic Pursuit. “Towel racks shouldn't be too far from the sink or shower, and shower and cabinet doors should be able to open without any obstructions. It sounds simple, but a lot of people get it wrong.”

To help with privacy, Juvakka recommends simple fixes—even if the space doesn’t lend itself to being the most private. For example, keeping windows from being next to showers and tubs or toilets, or opting for heavier curtains or stained or blurred glass to let light in without compromising on the security of the room.

Questions to Ask Yourself Before Remodeling Your Bathroom

Lots of people want a picture-perfect home, but something to keep in mind is that those ‘Instagram-worthy’ spaces aren’t always the reality.

“As an Interior Designer for thirty years, my biggest pet peeve is that there is always a beautiful photo in every magazine that shows a spectacular bathroom. [And in this picture], you will see a bathtub sitting by itself,” says Judson Rothschild of Rothschild Interiors.

“Yet, there is no place for a person to put soap, shampoo, conditioner, loofa, razor, etc. You will always see a stool with a towel, which means no one is ever going to use this tub,” he continues. “It’s basically a piece of art!”

While these tasteful photos do create a beautiful picture of the ideal bathroom space, as Rothschild says, it may be best to take these images with a grain of salt. Something may look beautiful, but that doesn’t necessarily mean it’s functional.

There are so many less-than-pretty items we keep in our bathrooms, and whether it's beauty products or toiletries or cleaning products, most bathrooms skimp out on the storage or don’t have spaces that actually make sense.

“Our biggest pet peeve is a flat mirror instead of a built-in medicine cabinet,” say Kate Pawlowski and Ann Lightfoot of Done & Done Home. “The space behind bathroom sinks can't really be used for anything other than a mirror, so adding additional storage behind the mirror just makes sense! [This] can completely transform the functionality of the bathroom.”

Some designers, however, have noticed that medicine cabinets are actually on the way out.

“We are seeing less and less medicine cabinets being incorporated in modern bathroom designs,” says Yoselin Castro, Senior Interior Designer at Mackenzie Collier Interiors. “[However], there are many ways to go on about designing functional storage options within the bathroom vanity whether you have cabinet doors or drawers.”

She suggests putting the vanity right by the entry of the bathroom to take advantage of the wall. This way, storage is incorporated in a less obtrusive way, and the toilet can be located in the middle of the bathroom—between the vanity and the shower—as opposed to right at the entrance.

However, it’s important to keep in mind that there is such a thing as too much storage space—for the wrong items. Pawlowski and Lightfoot say that closet spaces inside bathrooms are often ineffective.

“Typically, [bathroom closets] are very deep and people use them for linens, which leads to a ton of clutter and damp towels and sheets,” they say. “We advise our clients to store linens somewhere else, if at all possible and to utilize labeled bins for deeper shelves. That way health and beauty products are contained and overbuying is minimized.”

A bathroom should be a space that’s easy to navigate and well-lit, whether by natural light or intentional, artificial light fixtures. However, in a desire to create a more ‘trendy’ space, proper lighting, unfortunately, gets neglected at times.

“Poor lighting is a self-explanatory pet peeve,” says Castro. “Besides the decorative light fixtures by the vanity, one should always plan to have additional light sources such as recessed can lighting, just to make sure they’re suitable for wet areas!”

The shower is a staple item in every bathroom, but unfortunately, not all showers are designed in a way that makes sense. When it comes to layout, some showers are located too close to windows or openings, creating safety concerns. Other showers lack proper ventilation, which can eventually cause water damage issues. Some showers don’t even have controls located inside the shower itself.

“A serious peeve of mine for bathroom design is when the controls for the shower are behind a shower door, making it difficult to turn on the water before stepping inside,” says Stephanie Nguyen, Atlanta-based Architectural Project Manager. “[This] is just poor design in terms of functionality!”

Another concern is a lack of intentional storage for hygiene products. While this, at first glance, doesn’t seem like a big deal, not having a space for self-care items often results in them ending up on the shower floor—not the best look and not necessarily safe, either.

“Our biggest pet peeve in bathroom design is the small cutout in the shower that is supposed to house a bottle of shampoo and a bottle of conditioner,” say Pawlowski and Lightfoot. “We have rarely, if ever, organized a bathroom that only had those two items.”

“People use all different types of products in the shower,” they continue, “and if they don't have additional storage, bottles end up on the floor of the shower which is not only unsightly, it can be dangerous.”

Finally, shower steam causes condensation—regardless of how efficient your bathroom fan or windows are. As such, it makes sense to opt out of using wallpaper that will inevitably be damaged from the steam and heat.

“If wallpapers are utilized in bathrooms with showers, the wallpapers should be made of vinyl and not paper,” say Oshri Adri & Jillian Dahlamn Bhatia of Adri + Dahlam Interiors. “Paper wallpapers are not resistant to steam and are more likely to peel with time.”