Blueberries include several species of flowering, fruiting shrubs within the Vaccinium genus, all native to North America. Relatives within the Vaccinium genus include the bilberry, cranberry, huckleberry, and lingonberry. Blueberry bushes have pointed, oblong leaves that are leathery to the touch and turn a brilliant red in the fall. The flowers appear in clusters of small, white, bell-shaped blooms in the late spring, leading to deliciously edible berries that ripen from green to a deep purple-blue. Cultivated blueberries are continually being bred for higher yields, heat and cold tolerance, and better pest resistance. Still, some people prefer the blueberries that grow wild in forests and fields. Wild berries are smaller, but many people find them the sweetest to eat.

Blueberries are best planted in the early spring, and the shrubs have a slow to moderate growth rate. Three-year-old shrubs might produce a small harvest, but a meaningful harvest can take as long as six years.

How to Plant Blueberries

When selecting blueberry bushes, the best choice is bare-root plants that are 2 to 3 years old. Older plants suffer more transplant shock and will still take a few years to begin producing large harvests. Blueberry shrubs are generally planted in the early to mid-spring. In growing zones 6 and higher, they also can be planted in the late fall.

Pick a spot that gets lots of sun but is sheltered from strong winds. Avoid a planting site that is close to tall trees or shrubs that might block the sunlight or compete for soil moisture and nutrients. Make sure the planting site has sharp soil drainage. You can mix some peat moss into your planting hole to keep the soil loose, acidic, and well-drained. Also, add a layer of mulch after planting. Evergreen wood chips, sawdust, and pine needles will help to keep the soil acidic. Blueberries also can be grown in containers as long as they get sufficient sunlight.

Blueberry plants should be spaced in a row about 4 to 5 feet apart; adjacent rows should be spaced 9 to 10 feet apart, which will provide plenty of room for harvesting. For bare-root plants, spread the roots out into a prepared hole, and then cover them with soil, making sure the root ball is no more than 1/2 inch below the soil surface. For container-grown blueberries, plant them about 1 inch deeper than they were in the nursery pot. Blueberry plants generally don't need any support structure on which to grow.

Blueberry plants need full sun to grow and fruit well. This means at least six hours of direct sunlight on most days.

Blueberries like very acidic soil with a soil pH in the range of 4.0 to 5.2. They also like soil that's rich in organic matter. If your garden has heavy clay soil, blueberries will fare better in raised beds where you can control the soil type. Sandy soil is preferable to dense clay.

To get the right soil pH for growing blueberries, it’s best to amend the soil the season before you intend to plant. Garden sulfur or aluminum sulfur can be mixed into the top 6 inches of soil to lower the pH as needed. If you have your soil tested at a garden center or your local extension office, they will be able to tell you how much sulfur you’ll need. It’s wise to retest your soil before actually planting to make sure you’ve achieved the results you were after. Continue amending and tweaking the soil periodically because soil tends to revert to its original pH.

Be sure the plants get a deep watering at least once per week. Blueberries are shallow-rooted and need at least a couple of inches of water each week, more during dry spells.

The temperature needs of blueberry bushes vary according to the species. The traditional highbush types prefer humid air and a cold winter climate, but the types bred for Southern gardens do not tolerate freezing temperatures. Most types prefer protection from drying winds.

Don’t fertilize your blueberries in their first year. The roots are sensitive to salt until the plants are established. Ammonium sulfate is usually used as a fertilizer for blueberries, as opposed to the aluminum sulfur used to lower the pH. But you can use any fertilizer for acid-loving plants, including blueberry food and azalea food.

It’s not uncommon for blueberry leaves to begin to yellow. Although this is usually a sign of iron deficiency, it is probably not caused by a lack of iron in the soil. More likely, this symptom is telling you that the soil pH is too high and the blueberry plants cannot access the iron that is already there. If you see yellowing progressing, have your soil pH tested and make adjustments as necessary.


Blueberries can self-pollinate. But for best results, plant more than one cultivar. This will often result in a higher fruit yield and larger fruits.

There are four main types of blueberry plants: highbush, lowbush, half-high, and rabbiteye. They are primarily classified by their size, and plant breeders continue to cultivate new varieties to improve their vigor. The main types include:

Blueberries and huckleberries come from the same genus. And the fruits might look similar on first glance. They’re both small and round with a blueish color. However, huckleberries tend to be more tart than blueberries, and their seeds are noticeably hard when you bite into them unlike blueberry seeds.

Blueberries will typically be ready to harvest between June and August. Most blueberry plants will start to produce a small harvest by their third year, but they won’t produce fully until around their sixth year. Mature blueberry bushes produce around 8 quarts of berries per bush. It’s possible to extend your blueberry harvest by planting early, mid- and late-season varieties.

The only reliable way to know whether blueberries are ready to pick is to taste them. Blueberries are their sweetest if allowed to stay on the plant at least a week after turning blue. Ripe blueberries will readily come off the stem. Simply hold a container under berry clusters, and gently pick them off with your other hand to drop the fruits into the container. Put them in the refrigerator unwashed as soon as possible. They typically can keep up to a week when refrigerated. Wash them right before use. They can be eaten fresh or used in baked goods. They also can be frozen and will keep in the freezer for around six to 12 months.

How to Grow Blueberries in Pots

Blueberries are popular in home gardens because they can grow in a small space, even in containers. In fact, they are one of the easiest berries to grow in containers. Container growth is especially ideal if you don't have adequate soil conditions for blueberries. Use a container that’s at least 18 inches deep with ample drainage holes. An unglazed clay pot is ideal because it will allow excess soil moisture to escape through its walls as well.

Use one container per plant, and choose a blueberry variety that remains fairly small. Select a potting mix made especially for acid-loving plants, and plant your blueberries at the same depth they were in the nursery pots. Keep the soil lightly moist but never soggy, and make sure the container gets plenty of light. Use a fertilizer made for acid-loving plants in the spring.

How to Grow Blueberries in Containers 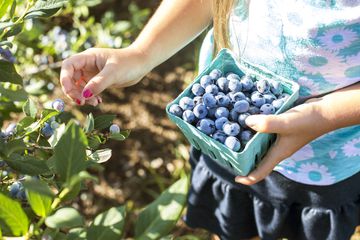 Blueberries will continue producing at their best with some maintenance pruning. In the first two years, remove any flowers that appear. Your plants will get bigger and more vigorous because of this. You can leave the flowers on for the third year. You won’t get many berries, but no pruning is necessary until the fourth year.

Beginning in the fourth year, prune your blueberry bushes in early spring while they are still dormant. Prune out any dead, broken, crossed, or weak branches. The goal is to open up the bush, so light can reach the middle. Maintenance pruning in subsequent years should aim at thinning out the older branches to encourage new growth. Cut back the oldest, thickest branches to near ground level, and prune back branches that have gotten too long or that are growing too thin. Older branches will look gray; newer branches will have more of a reddish tinge.

Like many woody shrubs, blueberries can be propagated by taking softwood cuttings and rooting them. Not only is this a cost-effective way to get a new plant, but it also helps to thin out mature plants. The best time to do this is in the early spring. Here's how:

How to Grow Blueberries From Seed

Before blueberry seeds can be planted, they first must be put in the freezer for 90 days to break their rest period. Fall is the best time to plant seeds in warm climates while spring is best in cool climates. Fill a flat tray with moistened sphagnum moss, sprinkle seeds over the moss, and then just lightly cover them with more moss. Cover the tray with newspaper, and place it in a room that stays between 60 and 70 degrees Fahrenheit. Keep the moss consistently moist.

Seedlings should emerge in about a month, at which point you should remove the newspaper and keep the tray in bright, indirect light. Once the seedlings are 2 to 3 inches tall, they can be planted in an equal mix of peat, sand, and soil. Continue to keep them moist. They should be large enough to plant in the garden in their second year in the spring after the threat of frost has passed.

It’s generally ideal to start with as large of a container as possible when growing potted blueberries. If you see roots coming out of the top and drainage holes of your container, it’s time to repot into something larger. Choose a container that comfortably fits the root ball, fill it with fresh potting mix, and replant your shrub at the same depth it was in the previous container.

Blueberry shrubs go dormant over the winter, and they’re generally hardy to the winter conditions of their growing zones. However, they can be susceptible to fluctuating winter temperatures that trigger new growth. To protect your shrub and help to maintain consistent soil temperatures, add a layer of mulch around it prior to winter.

By far the biggest problem growing blueberries is keeping away birds. Putting netting over your blueberries can be successful if you have only a few bushes. But if you have a large blueberry patch, consider using a bird deterrent that sends out a bird-in-distress call, which will repel birds.

Insects to be on the lookout for include: blueberry tip borer, cherry fruit worm, cranberry fruit worm, and plum curculio. If these are common pests in your area, check with your local extension for the prescribed deterrents and treatments.

There are some fungal diseases that can affect blueberries, including powdery mildew and leaf spot diseases. Your best defense is to plant genetically resistant varieties. It also helps to give your plants plenty of space for good air circulation, plant in full sun, clean up any fallen debris, and replace the mulch annually, so the spores cannot overwinter in the area. If you should experience problems, you might need to use a fungicide labeled for use on edible plants.

Some other common blueberry diseases to keep an eye out for include:

FAQ
Featured Video
Article Sources
The Spruce uses only high-quality sources, including peer-reviewed studies, to support the facts within our articles. Read our editorial process to learn more about how we fact-check and keep our content accurate, reliable, and trustworthy.