Keep your home and family safe

Written by
Camryn Rabideau
Camryn Rabideau is a freelance writer specializing in decorating and design. She covers home products for The Spruce and has also been published on Food52, Martha Stewart, and USA Today.
Learn about The Spruce's Editorial Process
Camryn Rabideau

Smoke detectors use two kinds of sensors to tip you off when there’s trouble and get to action with immediate evacuation (consider fire escape ladders), emergency services contacting, and fire extinguishers so a fire hopefully won't cause major damage to your home. Photoelectric smoke alarms are best at detecting smoldering fires, while ionization smoke alarms are better at detecting sudden, fast-burning fires.

Aside from sensor type, the other main consideration is whether or not you need hard-wired detectors. Hard-wired smoke detectors may require an expert for proper installation (to place it in the right areas and position!), but the major pro is that they only rely on batteries as a backup power source. Of course, you can also get battery-operated alarms that aren’t hard-wired for the ultimate ease of use. The downside, of course, is that they’re more likely to start chirping in the middle of the night because it’s time to change the battery. But that minor annoyance is worth the major difference smoke alarms bring to your home protection (Tip: fireproof drywall installation never hurts either). Two manufacturers, First Alert and Kidde, dominate the smoke-detector market, so you'll notice they're well represented on our list. 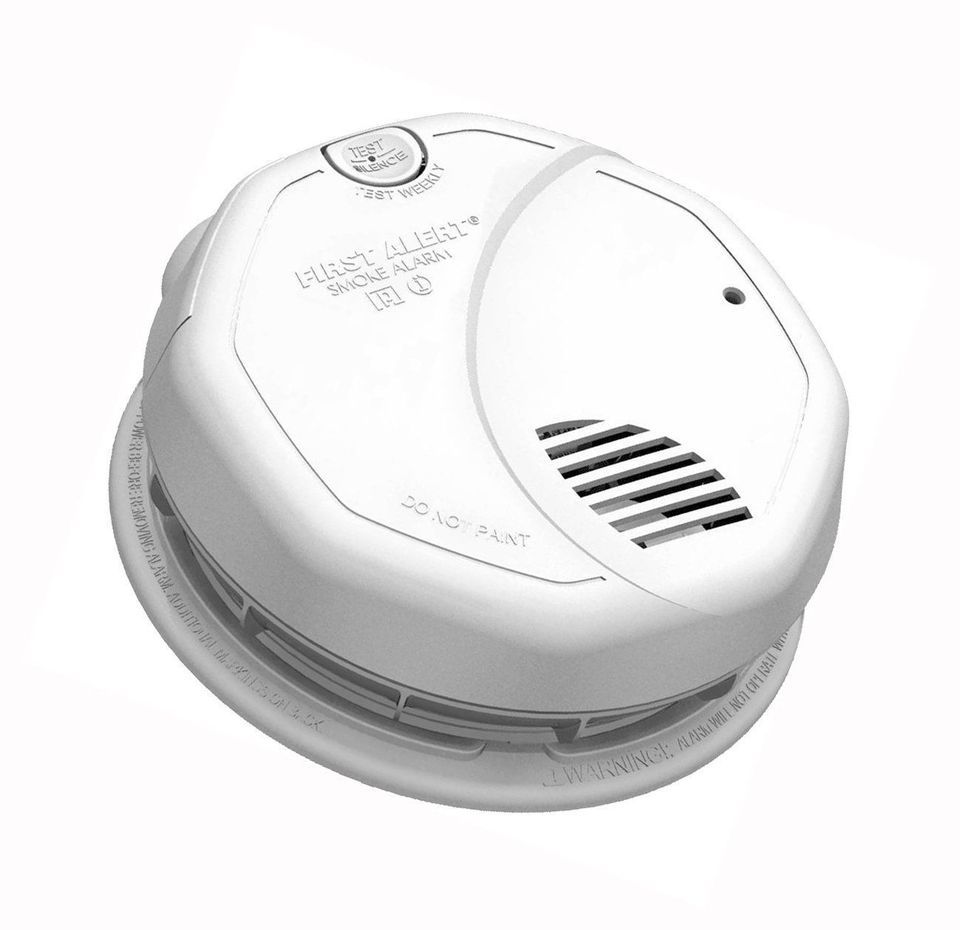 Buy On Amazon Buy On Firstalertstore.com

One of the best smoke alarms in terms of performance, reliability, and value is the First Alert Smoke Detector. This hardwired alarm uses both photoelectric and ionization to detect smoke, giving you peace of mind that your family will be alerted if a fire ever breaks out.

The First Alert Smoke Detector must be hardwired into your home, but it also includes a battery backup so it will still function if the power ever goes out. It features both photoelectric and ionization sensors for comprehensive fire detection, and there’s a button on the device that you can press to silence any false alarms—like if you burn popcorn. This same button can be used for monthly testing of the device. What’s more, this fire detector has an end-of-life signal that lets you know when it’s time to replace the unit. 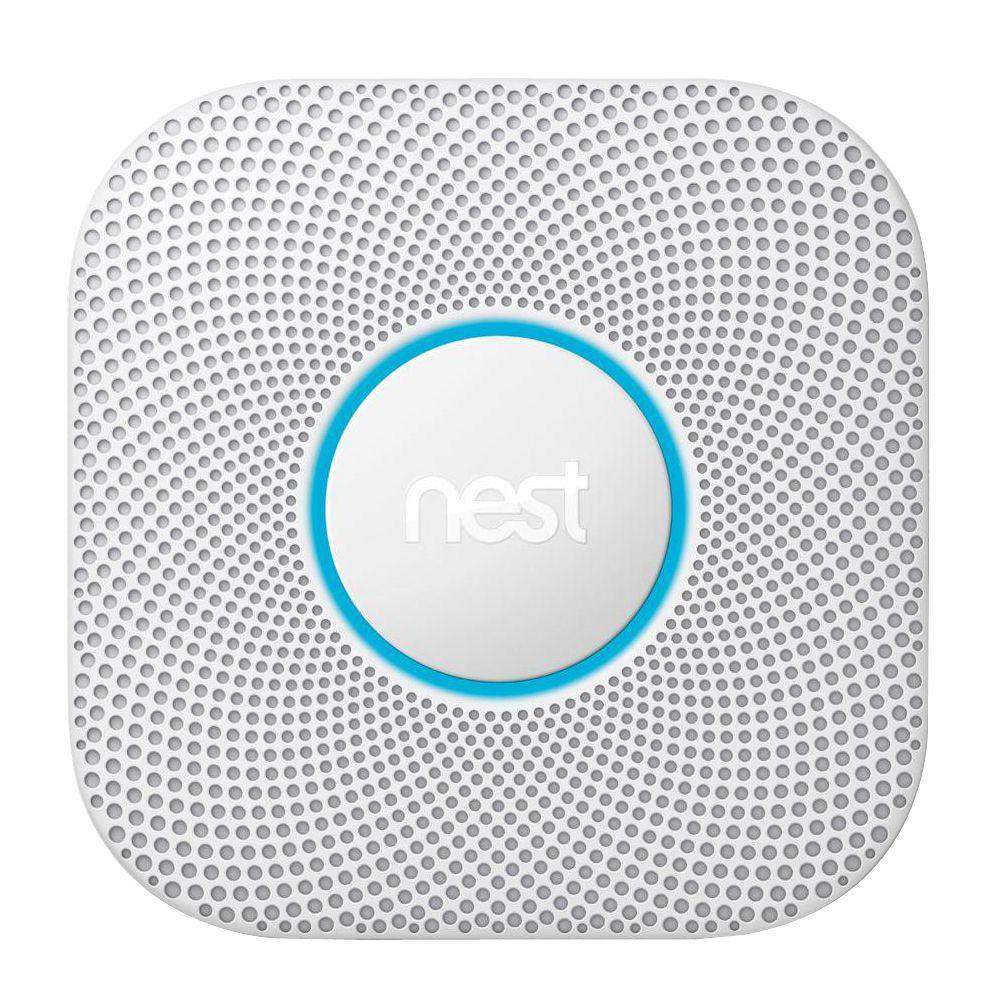 If you’re willing to spend a little more on a smoke detector, the Nest Protect is a top-rated smart smoke and carbon monoxide alarm. This unit comes in both hardwired and battery-powered models, and it connects to your phone via WiFi to send real-time updates on what’s happening in your house.

The Nest Protect includes a variety of useful features beyond smoke and carbon monoxide detection. This smart product automatically tests itself to save you the hassle, and it sends alerts to your phone whenever it detects a problem, letting you know there’s an emergency even when you’re not home. If there’s a false alarm, you can silence the detector from your phone, and when you walk underneath the unit at night, it lights up to help you see better.

"Given that our new house is three stories, we opted to create a network of Nest Protects, with one on the ground level and another on the second floor. The volume of the voice messages is clear without being too loud, and communication is broadcast from both devices as well as through the app."—Nathan Borchelt, Product Tester

If you’re not particularly handy, you might prefer to buy battery-powered smoke detectors, which don’t require any wiring to install. One of the best options in the category is the Kidde Battery-Operated Combination Smoke/Carbon Monoxide Alarm, which operates on three AA batteries.

This product is a fire alarm and carbon monoxide detector in one, with a voice alarm that will alert you to whether there’s fire or carbon monoxide in the home. Its alarm sounds at a loud 85 decibels, so it should wake you up if you’re sleeping.

When the batteries need to be replaced, the unit will announce that the batteries are low and give off a chirping alarm. The only downside to this product is that it only uses ionization technology, so it may not detect slow, smoldering fires as well as a product with a photoelectric sensor.

"The battery compartment will only shut if the batteries have been installed properly. We like this extra safeguard as it ensures our alarm is always functioning correctly."—Katie Begley, Product Tester

Buy On Amazon Buy On Walmart

Many modern home smoke detectors come with lots of features, but if you just want a basic, no-frills model, you should consider the budget-friendly First Alert Dual-Sensor Smoke and Fire Alarm. It doesn’t talk, light up, or connect to your phone, but this unit will let you know if there’s ever an emergency in your house—and isn’t that what really matters?

These smoke detectors are battery-powered, and they require two AA batteries. Because there’s no wiring needed, the First Alert detectors are easy to install, and they have both photoelectric and ionization sensors for comprehensive fire detection.

If there’s ever a fire, you should be able to hear the 85-decibel siren no matter where you are or if you’re sleeping, and if it’s a false alarm, you can silence the unit by pressing the button on the front. 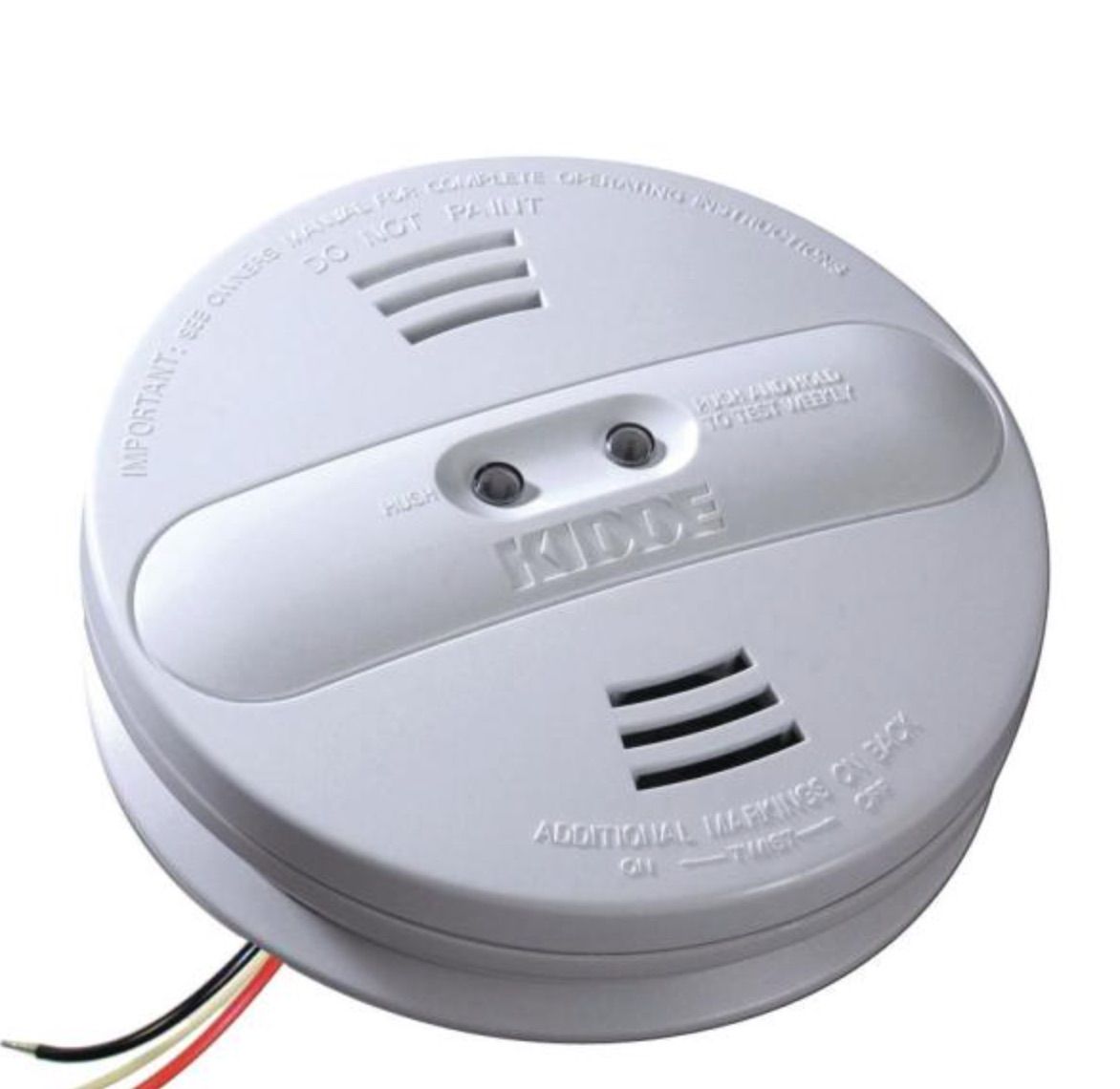 There are two types of fire sensors: ionization sensors, which are best for detecting flames, and photoelectric sensors, which are more responsive to smoldering fires. For comprehensive fire protection in your home, the National Fire Protection Association recommends dual-sensor alarms, which combine both these technologies.

Beyond our best overall pick, one of the best dual-sensor smoke detectors out there is the Kidde Hardwire Smoke Detector with Ionization/Photoelectric Dual Sensors. This hardwired alarm includes a 9V battery backup in case of a power outage, and it can be used as a standalone unit or part of an interconnected system. The design is tamper-resistant to prevent unwanted changes or theft, and there’s a hush feature to silence false alarms. The alarm itself operates at 85 decibels. 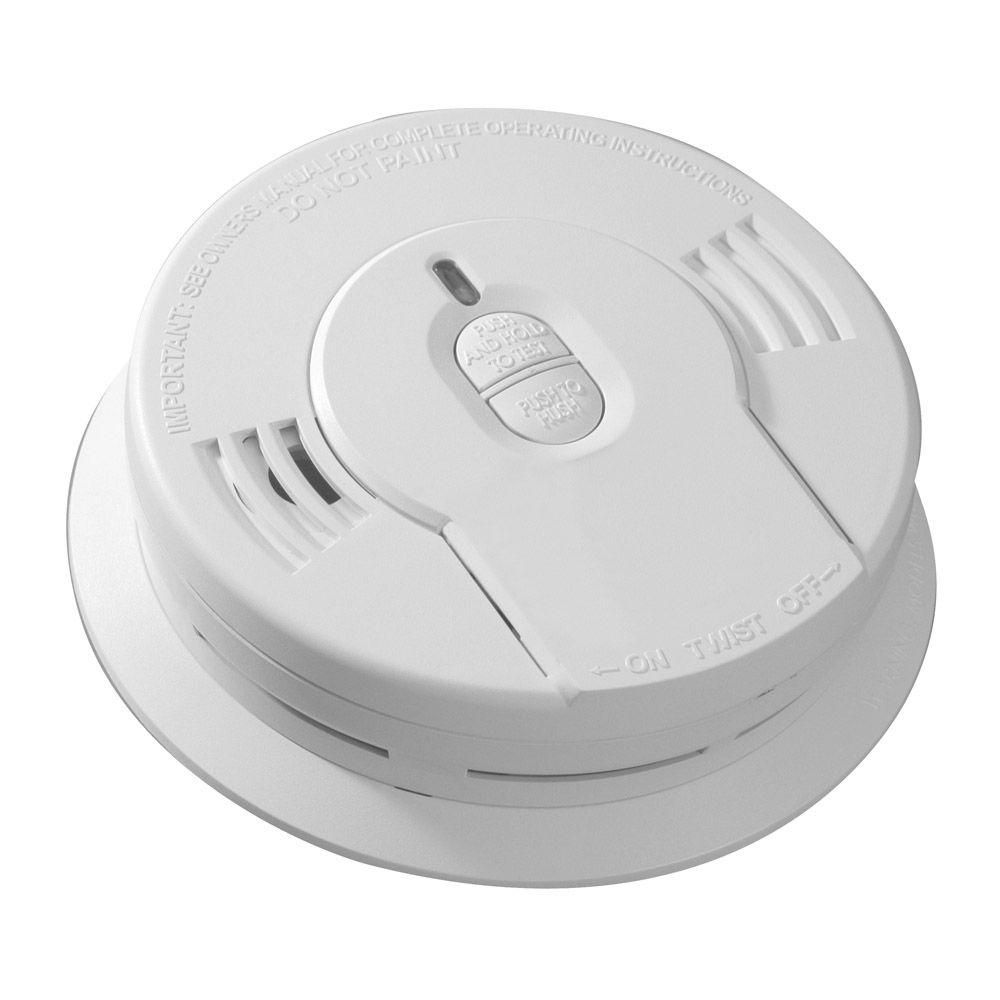 The National Fire Protection Association (NFPA) recommends changing the batteries in your smoke detectors every six months or so, and that can get pretty expensive if you have several units installed throughout your home. To solve this common problem, several companies now offer smoke detectors with 10-year lithium batteries so you don’t have to worry about frequent maintenance.

One of the top-rated products in this category is the Kidde Code One 10-Year Sealed Battery Smoke Detector. This product is powered by a lithium battery that can last up to 10 years, and the battery is sealed into the unit, preventing unwanted tampering and ensuring the alarm is always on—you can also check the green LED light to ensure it’s functioning properly.

This smoke detector is easy to install since there are no wires needed, and it includes a smart hush feature to silence false alerts. The Kidde Smoke Detector uses ionization sensors to detect invisible fire particles, but it does not include a photoelectric sensor. 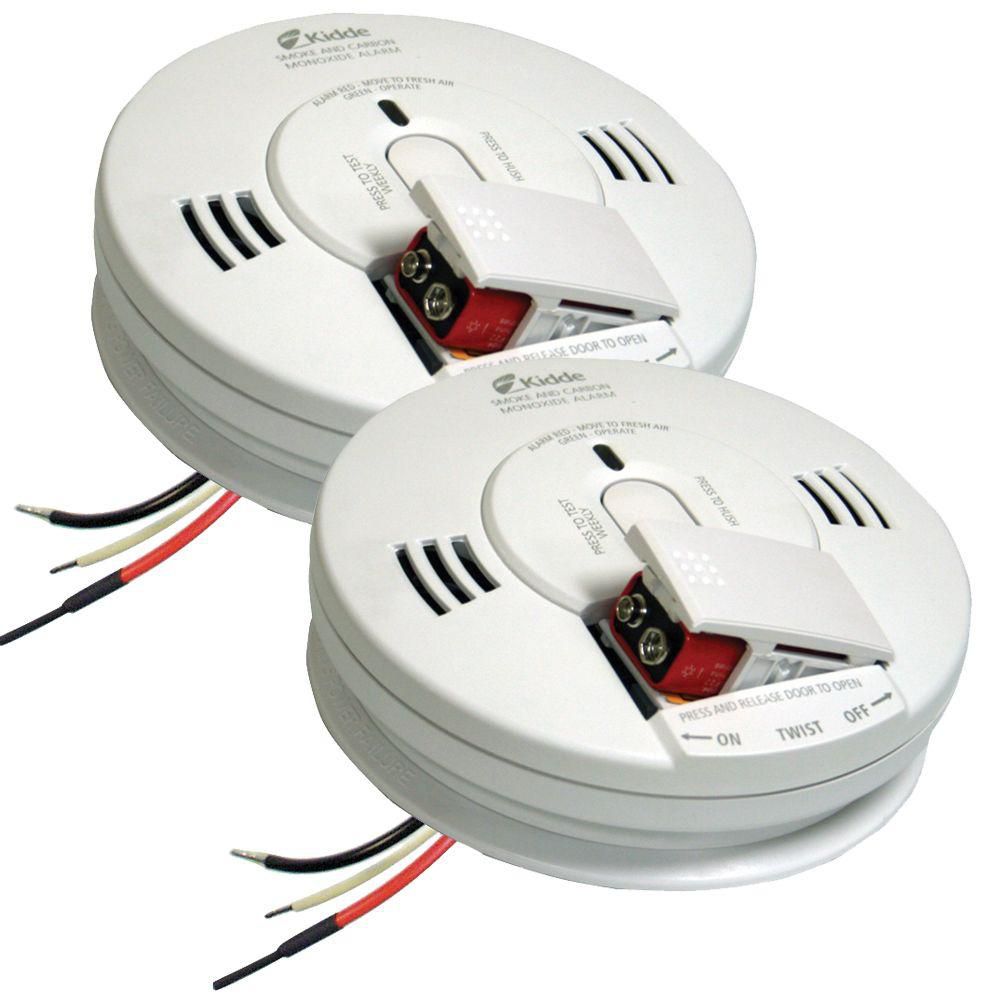 If you need all new smoke detectors for your home, you can save some money by purchasing a set of them. For instance, this two-pack of Kidde FireX Hardwire Smoke and Carbon Monoxide Combination Detectors is a great value for a pair of highly rated smoke and carbon monoxide detectors.

The two units must be hardwired into your home, and each has a 9V battery backup to ensure uninterrupted protection. The units are interconnected, so they all will sound in case of an emergency, and they include voice alerts that let you know whether there’s a fire or carbon monoxide detected. The only downside of these smoke detectors is that they solely use photoelectric sensors, so they might not detect a fast-burning fire as quickly as a unit with an ionization sensor.

You can't go wrong with the FIRST ALERT Hardwired Smoke Detector (view at Amazon), which is easy to install and includes both photoelectric and ionization sensors. If you're looking for a smart smoke detector, check out the Nest Protect Smoke and Carbon Monoxide Alarm. Though expensive, it earns high marks from our tester for its smart capabilities and early warning system, which will alert you before the alarm sounds.

What to Look for in a Smoke Detector

Smoke detectors can be hardwired to your home’s electrical system, but that often requires professional installation. Look for devices with backup batteries in case the power goes out, and be sure to check them every so often. Battery-operated models are easy to install but require more maintenance in the long run.

How do smoke detectors work?

Ionization smoke alarms have a small amount of radioactive material that ionizes the air around it and are generally more responsive to large flames. When smoke enters the chamber, it disrupts the flow of ions and activates the alarm. Photoelectric alarms on the other hand respond best to smoldering fires. This type of alarm works by using a light sensor. A light source is aimed into a sensor chamber and if smoke enters it, light is reflected and triggers the alarm. You won't be able to predict what kind of fire you may have so you should always have both types of protection in your home for ample safety.

How do you change a battery in a smoke detector?

To change your smoke alarm's battery, you'll need to remove the cover first. Most covers twist open, but for some you'll have to use a screwdriver. Your user's manual should give you specific instructions based on your model, but most are pretty easy to change once you've removed the cover. Simply disconnect the old battery (many use a 9v battery, but some use lithium) and replace it with the new one. Make sure it's firmly into place and facing the correct way.

Use the test button after installing the new battery to ensure it's correctly installed. If the test alarm doesn't sound, your battery may be facing the wrong way. Mark the inside of the alarm with the date you changed the battery to remind yourself later on. You should also check your alarm's battery at least twice a year to ensure maximum safety around your home.

How many smoke detectors do I need?

According to the NFPA, every level of your home should have a smoke alarm, including your basement. Smoke alarms are the fastest way to indicate a fire and prevent it from further spreading to other rooms of the house so you should have one in each bedroom and one outside every sleeping area. Even if your home already has a set number of hard-wired alarms, you can still place extra ones that are battery operated around the house as well. In the case of fire prevention, it's better to have an extra amount of alarms rather than not enough.

This article was written by Camryn Rabideau, a freelance writer who has been contributing to The Spruce since 2017. Her work can also be found on MyDomaine. To make this list, she considered each pick's power, lifespan, and sensor type, as well as insight from product testers.