A finely tuned, well-balanced ceiling fan will rotate overhead and keep you cool for many hours—quietly and efficiently. Using a ceiling fan is among the most economical ways to cool your home. They can even be used in the winter to better distribute heated air.

But if the ceiling fan is wobbly and out of balance, it announces itself with every turn of the blade. Even if you have learned to live with the noise, a ceiling fan that is out of balance no longer moves air with the same efficiency as before. Even more critical, an imbalanced ceiling fan can break loose and damage itself or injure people below. Learning how to balance a ceiling fan is easy and very inexpensive.

Ceiling fans can be very close to balanced, but no ceiling fan is perfectly balanced. Because your ceiling fan rotates from a central axis, this rotation helps to correct a certain amount of imbalance in a fan. Some degree of wobble is considered to be normal and is not necessarily a defect. When the fan's imbalance exceeds the tolerance level, the fan will wobble more than is necessary and will make noise.

Though most ceiling fan imbalance issues can be traced to the fan blades, you should first check the fan as a whole. The fan body and housing must be tight and in good condition. The blade brackets should be firmly attached to the fan body.

Fan blades should be checked to ensure that they are not cracked or delaminating. You should also make sure that each blade is firmly attached to its bracket.

Most ceiling fan imbalance problems result from incorrect and inconsistent blade levels. The bracket that attaches the fan blade to the fan-motor assembly may need to be bent back to its original position.

Some imbalance problems also result when the entire fan-motor assembly (the unit below the droprod) is off-balance. The fix is to attach metal adhesive or clip-on weights from a ceiling fan balancing kit to the top of the fan blades. This kit is sometimes included with the ceiling fan or is available from the manufacturer or from a home center.

Always turn off the power to the fan before working on it. It is always safest to turn off power to the fan with its circuit breaker, at the service panel. Do not attempt to bend the blade brackets to an irregular position. 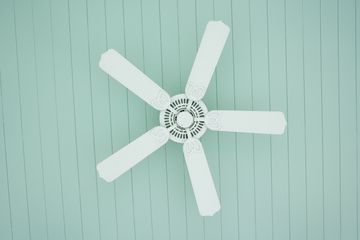