When you remove or open a wall or a ceiling, you may encounter stray electrical wires. The wires may have led to an outlet or a light that has been taken out of commission. Or the previous owners may have buried the wires behind drywall—an extremely dangerous practice.

Watch Now: How to Terminate Electrical Wire With Wire Caps

At the electrical box, test all wiring you will be working on with a voltage tester. Touch the tester probe to all wires and to all parts of each wire within the box. The tester should indicate no voltage. If it detects voltage, return to the service panel and shut off the correct breaker, then retest the wiring.

How to Fix Electrical Outlet Problems by Yourself 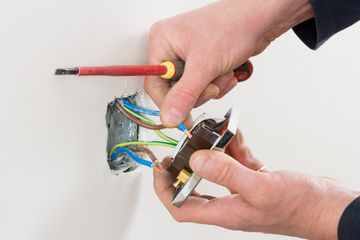 When to Terminate Electrical Wire With Wire Caps

It is always easiest to work with electrical wire before the drywall has been installed on the studs. If enough walls are open, you may be able to pull back the electrical wire all the way to an intermediate point or to its starting point.

The intermediate point can be another electrical box located in the direction of the service panel. If possible, it makes more sense to strip back the wire toward the upline electrical box and use that as your termination point than to install an additional box with capped wires and a blank wall plate.

An even better option would be to strip back the wire to its original starting point: the circuit breaker at the service panel. Unless this is a whole-house remodel with drywall removed, this is rarely possible.

Terminated, capped electrical wires should never be buried behind drywall, whether loose or in an electrical box. The leading edge of the electrical box must be flush with the drywall.