Installing a new electrical box in a finished wall requires a special type of box, often called a remodel, cut-in, or old work box. The old work boxes used most commonly by homeowners today are plastic boxes that have built-in ears or wings that secure the box to the drywall. To install the box, you cut a hole in the drywall, slip the box into place, then turn a couple of screws to pull the ears or wings tight to the backside of the drywall.

Traditional metal old work boxes used by electricians (typically on commercial jobs) are installed similarly but use a different attachment system. They rely on thin strips of metal, called Madison straps or "Mad bars," that are tucked into the gap along both sides of the box. The straps have rear tabs that rest against the backside of the drywall as well as front tabs that are folded over the edges of the box to hold the straps in place. Like plastic old work boxes, metal boxes have flanges on the front edge of the box that prevent the box from falling into the hole. The Madison straps keep the box from slipping out of the cutout opening.

Madison straps are easy to install. For a professional-looking job, it's important to cut the drywall hole carefully so that the box fits and is supported properly and so that all gaps are hidden by the outlet cover plate.

Learning About Electrical Wiring Used in the Home 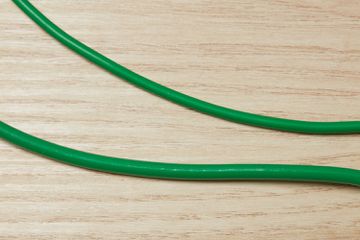