Dahlias are one of several perennial plant species that create tuberous roots. Like most such plants, including daylilies, dahlias are easy to propagate by digging up and dividing the root clumps. Unlike daylilies, however, dahlias are tender plants in zones 3 to 6, so if you want to grow them as perennials in these regions, the roots must be dug up and stored for the winter. This winter preparation offers a good time to propagate the plants through division.

In warmer climates where dahlia roots can remain in the ground, you can dig up, divide, and replant the root clumps in early spring before growth has begun.

What Is a Tuberous Root?

A tuberous root is a root structure consisting of a clump of fleshy nodules that extend down beneath a central stem. It is different than a true tuber, like a potato, in which the fleshy root structure has multiple "eyes," any one of which can create a new stalk. Nor is a tuberous root the same as a bulb, corm, or rhizome, each of which has a unique identifying structure. All these structures are sometimes mistakenly described as bulbs, but in reality, they are quite distinct from one another.

When to Dig and Divide Dahlias

Wait until the plants have been hit by a true frost and begun to die back. Once the foliage and stems are turning yellow, the plant is ready to be dug up. Don't dig them up too early, as you want the roots to be as fully developed as possible. But you also don't want to wait too long as dahlias are hardy only in zones 7 to 10, and soil temperatures below 20 degrees Fahrenheit will kill the roots.

It's best to try and plan for a week where dry weather is predicted. The stems will be cut several days before digging up the roots, and it's best to avoid water penetrating the cut stems, which can introduce rot into the root clumps.

Dividing dahlias is a trickier operation than for many perennial plants, as it's critical that each piece include a growth "eye." These eyes are typically located near the top of the tuberous structures, near where the plant stem was located. Without an eye, the root clump will not be viable.

Most experienced growers discard the center "mother" root clump, and keep only the well-developed offshoot root clumps to store for replanting the following spring. The mother clump has generally been exhausted by supported the plant's growth, and usually will not produce the following year.

15 Stunning Dahlias Types You Can Plant in Your Garden 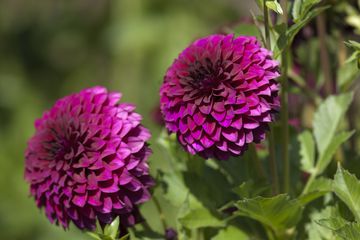 Dahlias: Season Ending Stunners
Article Sources
The Spruce uses only high-quality sources, including peer-reviewed studies, to support the facts within our articles. Read our editorial process to learn more about how we fact-check and keep our content accurate, reliable, and trustworthy.