Modern wireless telephone systems have largely eliminated the need to outfit your home with many phone jacks, since a central phone jack can now serve a single transmitter/message unit that sends signals to several wireless remote handsets that can be used anywhere in the house. And there are now many homes that have no land-line phones at all, relying instead on cell phones only. At one time, it was common for homes to have a phone jack in every room; today's homes may have none at all.

But if your home still has a landline, it's sometimes necessary to establish additional phone jacks that are hard-wired to the main telephone system. For example, in very large homes, wireless receivers may have trouble receiving the signals from a single transmitter. In these instances, the solution is often to run phone cables to remote locations and install jacks that can serve their own transmitters. It's also possible you may need to replace the main phone jack that serves the central cordless transmitter, should it wear out.

Fortunately, this increasingly rare DIY project is still quite an easy one to complete.

In older telephone installations, the phone cable typically has four small-gauge wires inside the outer jacket: red, green, black, and yellow. If you're extending a line to a room or other part of the house, you can continue to use this type of cable, or you can use newer Category 3 or 5 (Cat-3 or Cat-5) data cable, which also has multiple wires but with a different color scheme. Cat-3 or Cat-5 cable works just as well as the old cable for phone service, and it works much better for data (such as for a DSL internet connection). With either type of cable, once the cable is run to the jack location, the wiring of the jack is a simple matter of matching up the correct wire colors.

Our project assumes the phone cable to the new jack location has already been installed. Running phone cable is generally any easy process, in which the wires at one end of the cable are first attached to the matching screw terminals on the main phone terminal block. After the cable is run through the walls or under the floor to the new location, finishing the job is usually just a matter of hooking up the wires to a new jack using the same color-coding. Running phone cable through finished walls uses many of the same techniques that are used for running electrical circuit cable, but the job is considerably easier since phone cable is quite small and flexible.

Telephone wires inside your home carry a very low-voltage electrical current and are generally quite safe to work on without shutting off the power. In fact, only the phone company can shut off the power to the phone system. But just to be safe, don't work on phone wiring with wet hands or when standing in water.

Troubleshoot Your Landline Before Calling a Technician 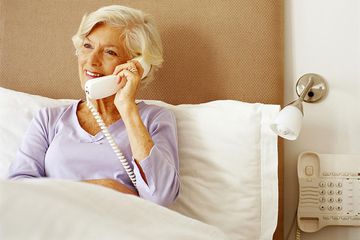 How to Run Cable in an Existing Wall 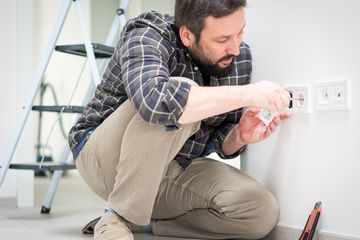