What’s the weirdest place you’ve ever put a plant? For Angela Alba, it’s on her shower caddy which hangs from her shower head. Angela lives in Brooklyn with her boyfriend, cat, and over 60 plants. Her plants are everywhere, including a hallway that’s got an amazing skylight casting natural light to her collection.

Inside This 60+ Brooklyn Plant Collection

Angela has a really unique collection ranging from a Cinnamon Cactus which she considers the trickiest in her indoor jungle to her Agave Americana, which was the first kind of plant she ever had (this one isn’t the exact one—the original died so she replaced it). She first started collecting plants in her early 20s when a friend of hers suggested that she find something to take care of, and plants seemed like the best thing.

When you enter her bathroom—which is one of the best rooms to keep humidity-loving plants if you’ve got light—you get to see her most unique plant, a Philodendron Bilietiae which has really long narrow leaves.

In her bedroom Angela has her Beaucarnea Recurvata, or the Ponytail Palm, which she said would be the plant she would be if she was reborn as one. We also get to see her most treasured plant, a Maple Leaf Begonia, which has the most gorgeous leaves.

Like a lot of other plant people, Alba’s most expensive plant is a variegated Monstera. She’s got both a Thai Constellation and a smaller Monstera that she’s hoping will have some variegation as it matures.

While she doesn’t talk to her plants, she does feel like they’re picking up on some of the things she says, “I was cleaning and a little bit frazzled and I kind of noticed the plants started drooping. Maybe it was just a coincidence but I really feel like they do pick up on my energy.”

How She Makes Room for Her Plants

Throughout her tour, Angela shows her love of her plants and also offers a great tip. “The best way to make room for plants is to get a place that’s dedicated for your plants. For example I have this shelf and I don’t really use it for anything except for plants.” Can you say #Shelfie?

Angela, like a lot of the other people we’ve met during this season of In the Weeds with Plant People, values the plant community a lot, “Even if I don’t meet the plant people in person, they're always quick to DM me and strike up a conversation about plants and I’ve met many online friends through this.”

This Ohio Plant Parent Lives With Over 200 Plant 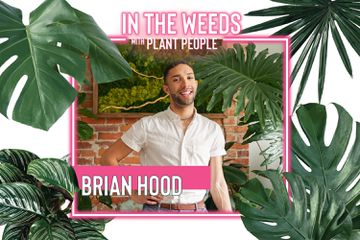