How to Grow and Care for Mahonia 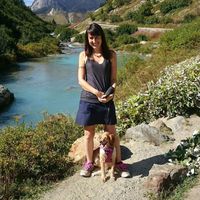 Gemma Johnstone
Gemma Johnstone is a dog expert and writer with over 15 years of experience in the pet industry and as an animal welfare advocate. She has worked for the Scottish Society for Prevention of Cruelty to Animals and fundraises and volunteers for local dog rescues.
Learn more about The Spruce's Editorial Process
Reviewed by
Barbara Gillette

Reviewed by Barbara Gillette
Barbara Gillette is a master gardener, herbalist, beekeeper, and journalist. She has 30 years of experience propagating and growing fruits, vegetables, herbs, and ornamentals.
Learn more about The Spruce's Review Board
Fact checked by
Jessica Wrubel

Most of the shrubs in the mahonia genus are densely textured with eye-catching, large foliage. They are shrubs well-suited to shady spots in your yard and are popular as privacy hedges. Because of their architectural, dramatic appearance, they're often used in minimalist landscape designs, especially in southern states.

North American native woodland plants, mahonias, are easy-to-grow and have an almost tropical look. The fragrant golden-yellow late winter or early-spring blooms are attractive to pollinators like bees and butterflies. The dark bluish-black berries appeal to a range of birds, who might also take refuge in the thick, green foliage. Part of the appeal of these upright evergreen shrubs is that they offer year-round interest and the spiky foliage is deer-resistant. Plant mahonias in spring or fall when the temperatures are mild.

Mahonias are known to be slow-growing, hardy, and low-maintenance shrubs. They don't like to be moved, and appropriate site selection is important for their success. Protect your shrub from freezing winds as these can cause burn in the winter, and make sure they have enough space to grow as they aren't fans of being crowded.

Most mahonia can tolerate full sun and heavy shade, but they thrive in partial shade positions. Deep shade can result in leggy growth for some species.

One of the advantages of mahonia species is that they don't tend to be particular about the type of soil they grow in. They usually do well in sandy, loamy, and clay types and across a range of pH levels. The soil just needs to be moist and well-drained.

Generally, mahonias do best with regular deep watering while they're establishing (especially during the first year), although you should avoid waterlogging. Once established, they're known for being pretty drought tolerant and will usually only need watering when there are hot, dry spells.

Apart from the danger of foliage burn because of freezing winds, mahonias usually tolerate a wide range of temperatures. They're typically able to handle temperatures as low as 5 degrees Fahrenheit. If temperatures drop as low as this, however, mulching in the fall around the shrub to protect the roots could help.

These plants don't need a rigorous regime of fertilization. An annual spring feeding with a slow-release, low-nitrogen fertilizer or a rich layer of mulch or compost with fish and bone meal should be sufficient.

There are around 70 species of plants in the Mahonia genus and many more cultivars and hybrids. Some popular, readily available varieties include:

It's worth noting that leatherleaf mahonia (Mahonia bealei) has been a popular ornamental species, but it is now classed as highly invasive in many southern states.

Mahonias do not have a demanding pruning regime. However, light pruning every couple of years in early spring after any frosts have passed can encourage healthy foliage growth. You can also help to retain a tidy look by thinning out any crowded branches.

If your shrub has been growing in deep shade, resulting in leggy, straggly growth, or tall specimens have become bare at the base, cutting it back to the ground can help it recover a more compact, full habit. After cutting back like this, it's a good idea to mulch around the shrub base and offer a light feed to encourage new, healthy growth.

It's also good to control any plant suckers that sprout from this slow and steady grower. You might want to remove these if you don't want the space to become overcrowded with mahonias.

Most mahonia species propagate readily from cuttings taken in the late summer or early fall before flowering commences. Following the steps below can help to increase the chance of success:

How to Grow Mahonia From Seed

To attempt to grow new mahonia from seeds, try following the steps below for spring planting:

Alternatively, you can sow the seeds directly in the ground in the fall and keep your fingers crossed for spring germination.

Because of their spreading habit, mahonia generally aren't suited to growing in containers. For best success, stick to growing in the ground where there is plenty of space to allow for this spread.

Mahonias are robust species, and pests and serious diseases aren't common problems. They can sometimes suffer from rust or powdery mildew (which causes brown spots on the foliage). While neither are typically fatal, they can cause curling, withering, or dropping leaves.

Watering the shrubs at the plant base rather than over the leaves, avoiding a damp location, and removing infected sections can help you to minimize these problems. Fungicides can be used if the problem is difficult to control. Mahonia aquifolium is particularly susceptible to rust.