Books have been written about the meaning of flowers and what they symbolize. Some, like the Easter lily, are symbolic of a season or holiday and early spring offerings at your local greenhouse will likely include a display of these white trumpet like blooms. Lilium longiflorum can be a focal point in the home garden in USDA hardiness zones 4 to 8, but it likely won't bloom for you in time for Easter celebrations. In northern climates, the fragrant flowers won't appear until mid-summer.

Like similar holiday flowers such as the Christmas poinsettia, Easter lilies are "forced." This means greenhouse growers manipulate the plant's environment to trick it into blooming in order to meet consumer demand.

Easter lilies have come to represent Easter in large part due to their showy white flowers because in the language of flowers white symbolizes purity. Native to Japan (the Ryukyu Islands) this plant first landed in Bermuda, a favored production location for the nursery trade. There it was commonly called the "Bermuda lily" and not until much later did the Easter lily became associated with that holiday in the western hemisphere.

How to Grow the Easter Lily 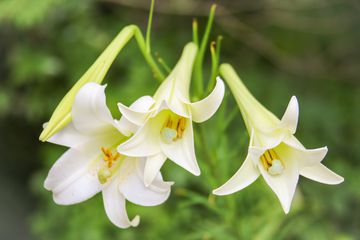 Often purchased for the holiday or given as gifts as potted plants, Easter lilies can be planted out in the home garden. It will return year after year as a perennial in those zones where it is hardy. Be sure to wait until all danger of frost has passed before moving your lily to the outdoors. The plant will also benefit from a gradual hardening off. This involves taking the pot outside for a few hours for several day and slowly increasing outdoor time to allow the plant to acclimate to the temperature change.

Likewise, some instruct using a bulb fertilizer or all-purpose fertilizer at planting time, but many gardeners experience successful growth for a few years simply by providing a soil that drains well and that has been fortified with compost (proper fertilizing may increase your plant's lifespan, however).

Pick a spot that receives full sun. After removing your Easter lily from its pot, install it in the ground to the same depth as you had it in the container, water it in, and apply a 3-inch layer of mulch around it. The reason to mulch, especially in this case, goes beyond weed control: Mulch will keep the roots cooler in summer, which this plant likes. Ideally, the bulb, itself should rest about 6 inches underground. If you are growing multiple plants, make sure that you provide enough space between them (1-2 feet). Keep the soil evenly moist, as best you can.

Summer's heat will take its toll, but do not worry: It is normal for the leaves to turn brown. Some gardeners cut the plant down to ground level (or nearly to ground level) at this point, promoting new growth later in the season. Again, some go against conventional wisdom here and do nothing when the foliage turns brown—not because they are mavericks, but because they are trying to save themselves work. Likewise, many gardeners fail to mulch the plant to help it over-winter (it is really a good idea to mulch in regions subject to harsh winters; be sure to remove the mulch in spring). Despite this lack of care, their Easter lilies often re-emerge just fine the following spring, grow to a height of around 3 feet, and produce multiple blossoms in July.

If you wish to divide long-established bulbs, do so in late summer or fall (after the foliage has browned). Such division can rejuvenate old plants. Even after the leaves have turned brown, do not forget that a bulb is left behind, underground. This bulb does not like to dry out, so continue to keep the soil evenly moist (not wet, but not dry).

In some areas (for example, New England in the U.S.), the red lily leaf beetle (Lilioceris lilii) is a potential problem for the grower of Easter lilies. It also attacks other members of the genus, Lilium (for example 'Fangio' L.A. hybrids and 'Stargazer' lilies') and the genus, Fritillaria. These beetles can defoliate a plant, up to the point even of killing it. If you do not think that you have the time or energy to watch for the beetles daily and pick them off by hand, try spraying neem oil on your plants at the first sign of an infestation.

Easter lilies are poisonous plants and can be deadly to cats.

Featured Video
Article Sources
The Spruce uses only high-quality sources, including peer-reviewed studies, to support the facts within our articles. Read our editorial process to learn more about how we fact-check and keep our content accurate, reliable, and trustworthy.