A popular houseplant in the United States, this tropical ornamental vine Epipremnum aureum (of the plant family Araceae) has been grown commercially in this country for nearly 100 years. Often produced in hanging baskets, small pots, and even as climbing totem poles for commercial spaces, pothos is widely welcomed into many homes and offices for its hardiness and aesthetic.

If your pothos leaves are turning yellow, it might be helpful to first identify what is the variety of pothos in question—it may have yellow leaves naturally! 'Golden Pothos' has intense yellow variegation on its leaves on a dark green background, exhibiting some natural yellow foliage. 'Marble Queen' is variegated in green and white, 'Hawaiian' has especially big leaves, and both 'Pearls and Jade' and 'Njoy' have long, flat leaves that come in a showy cream color with grey-green speckles. 'Jade' is solid green and has the usual heart-shaped leaves, 'Green Genie' has deep emerald, round, smaller leaves, and 'Neon' is chartreuse.

Regardless of the variety, it is typical for older leaves to turn yellow and drop off. Then most of the healthy leaves are left at the end of the vine. To maintain a healthy plant and promote new growth, cut it back two inches from the soil line. Besides natural aging, leaves on a pothos can turn yellow for several easy-to-fix reasons: too much direct sunlight; too much or low-quality fertilizer; or exposure to cold or hot temperatures.

Fortunately, even if your pothos plant has yellowing leaves, you can likely renew its health by identifying the problem and fixing it effectively.

How to Grow Pothos 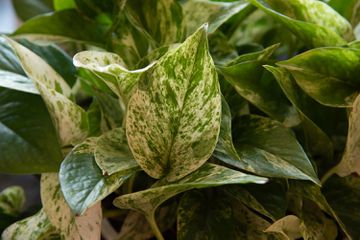 Here are five specific problems that may be causing pothos leaves to turn yellow:

When pothos has pythium root rot, the roots look black and mushy; mature leaves yellow and fall off the plant. (With bacterial leaf spot disease, water spots will appear with yellow halos on the leaf undersides.) Root rot is caused by overly saturated soil, which can be a result of overwatering, poor drainage, or heavy soils.

Bacterial wilt disease often occurs during commercial production in the single-node rooting stage when infected cuttings do not root as they are meant to. Bacterial wilt then sets in. Veins and stems can turn black, and if the infected, oozing stems are cut and put in water, millions of bacteria can be seen released into the container. This disease is caused by the bacteria known as Ralstonia solanacearum, which can swim and be transported in irrigation water, infecting root hairs and plant wounds during further propagation and handling of the plant.

Southern blight is more common in warm southern climates. Once transported from commercial greenhouses, which are most commonly found in Florida, it can thrive in greenhouses throughout the country of the United States.

Symptoms of bacterial wilt and southern blight diseases can escalate severely and rapidly during the warm times of the year. Southern blight is caused by the fungus Sclerotium rolfsii, which grows especially fast in wet soils and hot temperatures. The first sign of southern blight is typically seen in strands of fungus. These will be white, feathery strands of fungal mycelia growing on the soil surface and up the stems. This fungus then produces oxalic acid, pectolytic enzymes, and cellulolytic enzymes with the purpose of dissolving the plant's cell walls.

Manganese toxicity is another problem to keep an eye out for. While bacterial wilt and southern blight can occur in younger plants, excess amounts of the element manganese are more readily a problem in older pothos plants. Such excess may cause the plant to appear diseased, but manganese toxicity not caused by fungal, bacterial, or viral organisms.

Manganese toxicity is most commonly noticed in stock plants that absorb too much manganese. It can be caused by too much micronutrient fertilization, potting soil acidity reaching 5.0 or lower, or an excess of certain fungicides.

Ethylene damage also looks like a disease, but it is not caused by fungal, bacterial, or viral organisms. Certain fungicides may cause leaves to turn yellow and then to tan and light brown. Ethylene damage in particular usually occurs in fall and winter.

Like manganese toxicity, Ethylene damage is also not actually a disease. Ethylene is a naturally occurring gas. It arises from decomposing plant matter, some ripening fruit, and sometimes by greenhouse heaters in winter that malfunction. Accumulating in poor ventilation, it may be contained to detrimental proportions during the shipping of pothos plants.

How to Treat Yellowing Leaves on Pothos

If your pothos has root rot, you'll need to first take care of the diseased roots. Disinfect a pair of scissors with a mixture that is 1 part bleach and 9 parts water, then snip off the yellowing leaves. To create the cleanest of conditions, disinfect the scissor blades after each cut. Dig up the plant and cut off all the roots that are mushy and brown. Clean the pot, rinse off the roots with water, and return the plant to the pot with fresh potting soil. Be sure it is placed where it gets part sun to part shade, that the soil is draining, and that it is not overwatered. Avoid misting the plant because the fungi that cause root rot prefer moisture.

To treat bacterial wilt on a small scale, for a single plant, try cutting a diseased stem near the soil level, placing the cut stem in a clear vase, and letting the milky substances run out of the infected plant. If an outbreak of bacterial wilt disease happens on a large scale in a nursery, it is recommended that staff bag the plants, soil, and pots and remove them from the site. Also disinfect benches and tools before any replanting or reordering. Similarly with southern blight, be sure to discard infected plants and do not reuse pots in a nursery. Treat remaining plants with a fungicide drench that has pentachloronitrobenze (PCNB) or flutolanil.

To treat manganese toxicity, stop fertilizing the plant with any fertilizer that has the manganese element such as maneb or mancozeb, and avoid using any trace-element mixes. Instead, apply lime to the soil and raise the pH up to between 6.0 and 6.5. To treat Ethylene damage, make sure greenhouse heaters have good ventilation and work properly before winter.

Both southern blight and Ethylene damage can be prevented. To avoid another bout of Southern blight in your pothos, do not store potting mixes directly on the ground where Sclerotium could colonize wood chips and soil. To prevent further Ethylene damage, avoid shipping or mixing flowers, other foliage, or vegetable plants with pothos, which could infect it yet again with a range of diseases, pests, and other issues. Root rot can also be prevented by increasing drainage and adjusting your watering schedule.

Regardless of what you do, a certain amount of yellow leaves can be expected because it happens naturally when plants age. It's just a part of the leaf life cycle.

Pothos vs. Philodendron: What's the Difference?
Featured Video
Article Sources
The Spruce uses only high-quality sources, including peer-reviewed studies, to support the facts within our articles. Read our editorial process to learn more about how we fact-check and keep our content accurate, reliable, and trustworthy.