When your shower faucet is no longer operating correctly, it might be time to replace the valve it contains. Faucets that are hard to move, don't turn the water off completely, or that cause fluctuations in the temperature of the water, can all indicate the need for a new valve.

In addition to replacing a faulty valve, you might also want to undertake a shower valve replacement to take advantage of a new pressure-balanced valve that senses fluctuations in the system and keeps the water temperature constant, even if other fixtures and appliances are running while someone is showering. This can not only be a comfort enhancer, but it can be an important safety feature to prevent scalding.

Replacing a shower faucet valve is a rather advanced project that typically requires soldering copper pipes and fittings. However, if you don't have soldering skills—but you do have access to the supply piping—you can install a new valve using CPVC pipe or PEX tubing, neither of which require soldering.

This project can be divided into two phases: removing the old valve and installing the new one.

Make sure you know where the shutoff valve is for your home's water supply. While you can often cut the water supply closer to the shower on which you'll be working, when it comes to plumbing projects, it's always best to know where the main shutoff is in case something goes wrong and you need to quickly stop a flood.

Plumbing work can vary widely depending on the specifics of your shower. Depending on the shower's surroundings, wall material, and more, the following may be required to complete this project: opening the wall; removing, replacing, or repairing tile; soldering; and making multiple plumbing connections. If replacing your shower valve requires any of these steps, our experts strongly recommend that you consider hiring a professional to complete this project for you.

How PEX Pipes Can Help You Do Your Own Plumbing 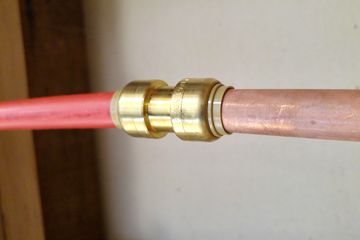