Major remodeling projects often involve opening up walls, floors, and ceilings, and this presents a good time to inspect old plumbing pipes and to replace them when necessary. Water supply pipes are especially critical to inspect since these carry water under pressure, and the results of a major plumbing leak can be devastating. Replacing old plumbing pipes is a very common project, and all homes will need to have this done sooner or later.

At one time, replacing water supply pipes usually meant installing new copper pipes joined with sweat-soldered fittings that required a flame torch and considerable skill to assemble. Copper was the plumbing pipe of choice from the 1950s until 2000 and was widely used both in new construction and to replace the galvanized steel water supply pipes that had been the standard into the 1950s. But copper's use has gradually faded, due to the introduction of PEX plumbing tubing. PEX is made of cross-linked polyethylene, a form of flexible plastic tubing with cross-linked molecules that create great durability and strength.

While copper pipes and fittings are still common, many professional plumbers now use flexible PEX for all new construction and for most repairs and extensions to existing copper systems. PEX is especially friendly to DIYers, who find the various methods of making connections much easier than soldering copper fittings with a torch.

PEX tubing is typically connected with either crimp-ring connectors, which require an inexpensive specialty tool known as a crimper, or with push-fit connectors, such as the popular SharkBite fittings. Both methods can be used to join new PEX tubing to existing pipes, but because push-fit connectors require no special tools, they are a favorite among DIYers.

Watch Now: How to Replace Copper Pipe With PEX

When you run into corroded or leaking copper pipes during your remodeling projects, you have several DIY options.

Replacing visible runs is the solution many DIYers choose because this method is not as ambitious nor costly as re-piping the entire house. While it may sound complicated, this option is actually not much harder than the spot-fix option.

Copper pipes properly installed have a very long life (50 years or more), but they do go bad eventually. Original copper pipes may be nearing the end of their useful lifespan, but it's not always easy to recognize when they are begging for replacement. When copper pipes are just starting to corrode, leaks don't always gush forth and make themselves obvious, but there are early signs you can look for.

Any or all of these signs mean that your copper pipe is on its way out.

All About Push-Fit Plumbing Fittings 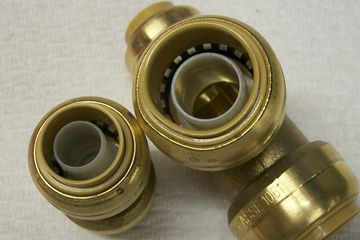 Make Sure Your Electrical System Is Grounded

In homes with older electrical systems, the electrical system is sometimes grounded through metal water pipes. This is not a common practice with circuit breaker systems, which are usually properly grounded when they are installed, but it is more common in older systems that are protected by fuses rather than circuit breakers. When replacing metal water pipes with PEX, this continuous grounding path may be interrupted, since plastic piping is not an electrical conductor.

In addition, codes in some communities may require that the entire plumbing systems be bonded to the home grounding system. Here, too, replacing copper with PEX may interrupt that bonding. Consult local code authorities for instructions on how to handle bonding with plumbing systems using PEX.

For this reason, it is a good idea to check to make sure your system is still properly grounded whenever replacing metal plumbing pipes with plastic. If you find that outlets have lost their grounding connection, consult an electrician to reestablish grounding. Normally this is done by connecting the main service panel to a grounding rod driven into the earth, via a bonding wire.