When hummingbirds zip from flower to flower, their emerald green, ruby red, and other jewel-like colors flash in the sun. These aerial acrobats are fun to watch, but they’re so fast, they’re hard to see—unless you know a few secrets, like how to attract them, keep them, and use a migratory map to follow their journeys. We talked to hummingbird experts about how to do just that.

How to Attract Hummingbirds

The best way to attract hummingbirds is by planting native plants, says David Mizejewski, a National Wildlife Federation (NWF) naturalist. “Natives form the foundation of the food web and the natural habitat hummingbirds need for survival.” These plants also support insects that hummingbirds eat, “something that most ornamental non-natives don’t do.”

To find native wildflowers, shrubs, and other plants for your area, type your zip code into Audubon’s Native Plant Database. (It also identifies plants for birds.) The NWF also sells native plant collections for the Northeast, Mid-Atlantic, and Midwest regions through its Garden for Wildlife initiative. Collections for other regions are in the works.

What Do Hummingbirds Eat?

These little birds have big appetites and fast metabolisms, beating their wings up to 80 times per second. Although native plants are the best choice for drawing them to your yard or garden, others will work. Look for tube-shaped blooms in red and other bright colors, and the birds will sip nectar from them with their slender beaks. It’s easier for them to see masses of color, but if you lack garden space, grow container plants.

Hummers also gobble bugs to supplement their liquid diet. “When they’re in a breeding cycle or feeding their young, they spend a lot of time chasing whatever insects they can get their little beaks on,” says Mike Muraco, Center Director for Audubon's Strawberry Plains Center. Avoid using insecticides or other chemicals to keep the birds and their food supply safe.

How to Make Sugar Water for Hummingbirds

Hummingbirds will visit feeders stocked with sugar water as a nectar substitute. To make it, add a cup of refined, white sugar to four cups of boiling water. Stir until the sugar dissolves, let the mixture cool thoroughly, and put it outdoors in a feeder designed for hummingbirds.

Don’t substitute honey or any other sweetener for the refined sugar, and don’t use red dye, Muraco warns. They can be harmful or toxic to these tiny creatures.

Homemade sugar water spoils fast, so rinse your feeders with hot water and refill them often. Muraco changes his feeders every day or two, especially in hot weather.

Buy more than one feeder and rotate them through the dishwasher. Mold and other contaminates can be deadly, so keep your feeders and sugar water clean. If you make a batch of sugar water and can’t use it all at once, refrigerate it for up to two weeks.

When Is It Time to Put Out Hummingbird Feeders?

Where Do Hummingbirds Nest?

Hummingbirds don’t use nesting boxes or tree cavities. They build their nests from 10 to 90 feet off the ground, using plant fibers, lichens and spider webs. Mizejewski says “they need healthy, native plant communities to supply the nectar and insects that make up their diet, complete with trees, shrubs, and other dense vegetation.” To give them an attractive nesting site, grow different kinds of plants with different heights. They like plants with soft fibers, fuzzy leaves, catkins or other materials they can use, such as willows, cottonwoods, Lamb’s Ear (Stachys byzantine), milkweed, and ornamental grasses.

Where Do Hummingbirds Live?

“Wherever they find suitable habitat,” Mizejewski says. Many of the ruby-throats Muraco sees like living on the forest line “where they’re able to easily get in and out for flowers and insects. They appear to enjoy the protection of the trees but prefer to be close enough to zip in and out.” Other species live in grasslands and meadows or even in urban environments and desert areas.

“There are 13 species that regularly range in the United States,” Mizejewski says, “mostly in the West, with a few more species that are rare visitors. The only hummingbird that breeds east of the Rockies is the ruby-throated, although occasionally western species show up in the East at random, usually during the winter in the southern states.”

Most of these North American species are migratory, he adds. “Some travel great distances on their tiny wings.” Ruby-throats fly from the eastern half of North America to Central America, even crossing the Gulf of Mexico. “Rufous hummingbirds travel some 4,000 miles from breeding habitat in Alaska and Canada south to Mexico for the winter.” Costa’s hummingbirds travel shorter routes from their homes in Southern California and the Desert Southwest to Mexico. Others, like Anna’s hummingbirds, remain in their habitats, which stretch from the Pacific Northwest to Mexico, year-round.

Muraco says he’s often asked if we should take down our feeders down in fall, so we don’t encourage hummingbirds to stay around when the temperatures drop. “The instinct to migrate is too strong. All the feeders in the world wouldn’t make them stay.” But he encourages leaving out some feeders for stragglers.

How Long Do Hummingbirds Live?

Mizjewski says most species probably live three to five years. Don’t be disappointed, Muraco points out, but you’re probably not seeing the same bird at your feeder all the time. “Everybody likes to think little ‘so-and-so’ comes back to my yard every year, but that’s incredibly difficult to verify. I’ve been banding 400 to a thousand hummingbirds every year for 20 years, and I’ve had only a handful come back. Your bird is probably in the region, but not to your specific window.”

Track Hummingbirds on a Migration Map

“Tracking hummingbird migration is a fantastic way to learn more about these incredible birds,” Mizejewski says. He recommends Journey North and Operation Ruby-Throat. As fall approaches, look for Hummingbird Central. Its spring 2021 migration map is complete, but a tracking map that follows the birds when they fly to warmer climates is expected to follow.

You can become a citizen scientist by reporting the birds you see. You’ll also learn when to expect the first birds in your area to arrive and depart and get clues about when courting and nesting will begin and when baby hummers will hatch. 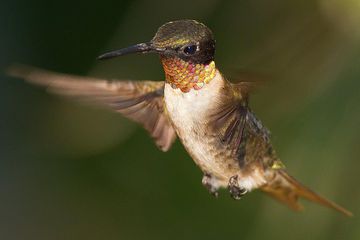