Make sure you're prepared for the next snowstorm

Camryn Rabideau
Camryn Rabideau is a freelance writer specializing in decorating and design. She covers home products for The Spruce.
Learn more about The Spruce's Editorial Process
Fact checked by
Sarah Scott 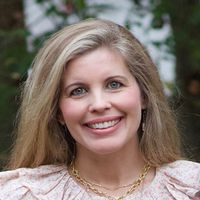 Sarah Scott is a fact checker and researcher.
Learn more about The Spruce's Editorial Process

If you live somewhere that receives several feet of snow every winter, chances are a snow blower would be a worthwhile investment for your home. Snow blowers typically cost several hundred dollars, but they can save you hours of backbreaking work, moving even the heaviest snow quickly and easily.

However, there are a lot of snow blowers out there to choose from. You’ll have to decide between gas- and electric-powered models, as well as whether you want a one- or two-stage design. Gas snow blowers tend to be more powerful, but like most gas tools, they also require more maintenance. You’ll also want to consider factors such as the amount of snow you usually get, how heavy the snow is, and how much area you need to clear. 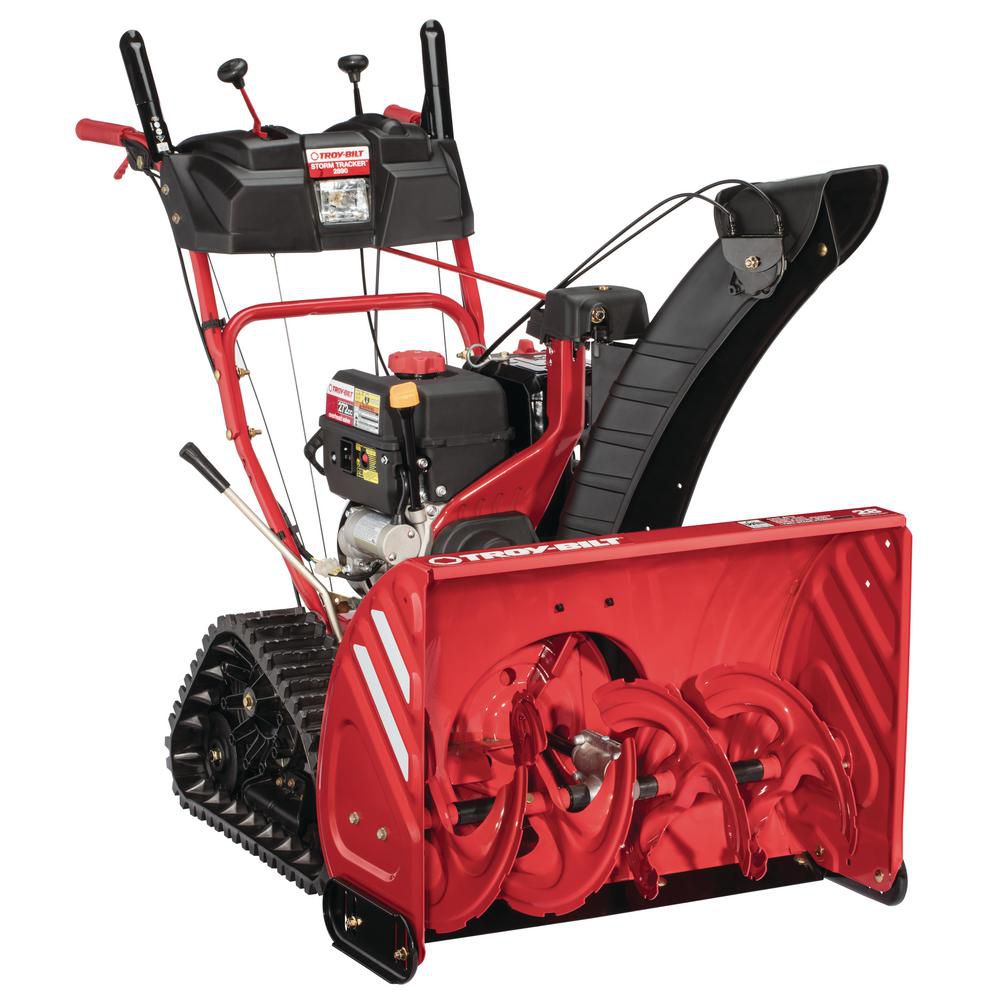 For a powerful, reliable tool that can handle deep, heavy snow, you need a model like the Troy-Bilt 277 cc Two-Stage Gas Snow Blower. This high-end gas-powered snow blower has all the features you could ever want or need, including a powerful 277-cc engine and a 28-inch clearing width to tackle up to 12 inches of snow.

The Troy-Bilt Two-Stage Gas Snow Blower has serrated steel augers that break up ice and snow, and its two-stage snow thrower is easy to control thanks to its remote chute control. This allows you to change where the snow is being thrown from a control near the handle, making it easy to switch the direction quickly as you plow. The model is mounted on hardened gears and features an in-dash headlight, trigger control power steering, heated handgrips, and more. 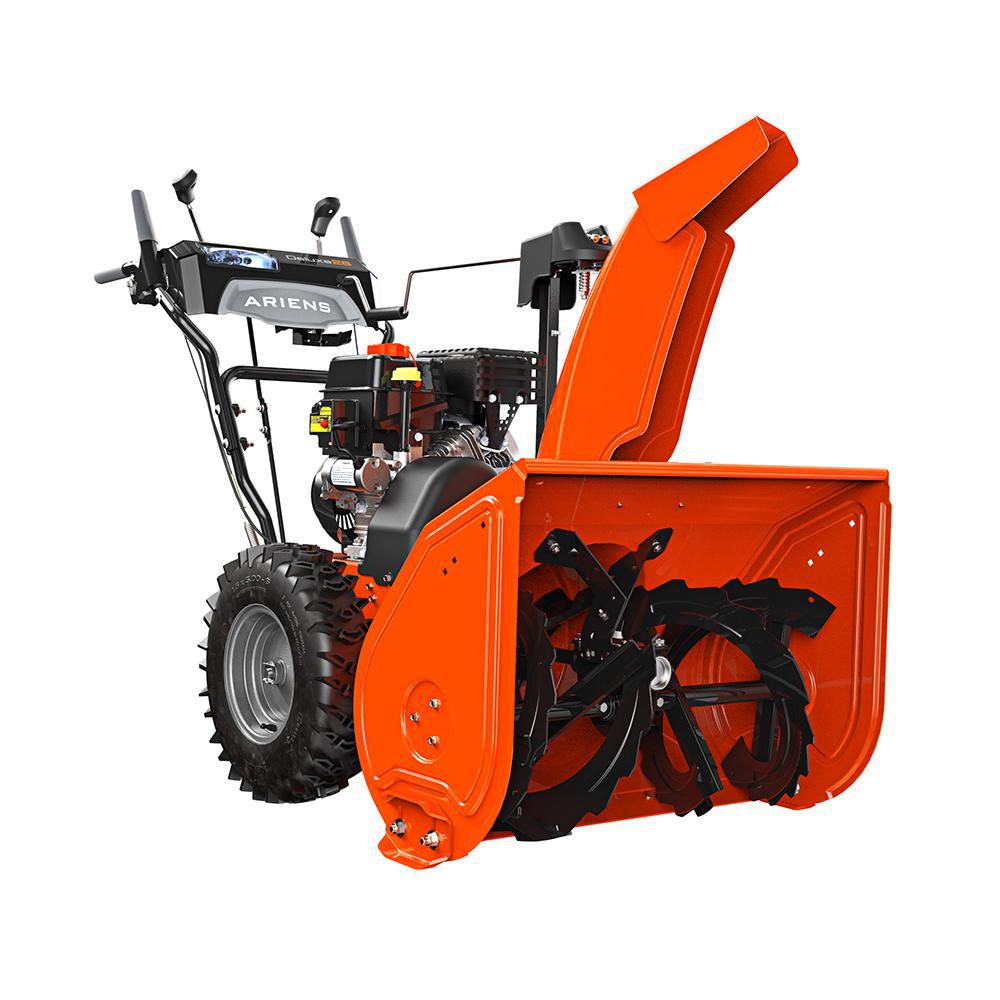 The majority of snow blowers sold today are powered by gas, including the top-rated Ariens Deluxe Two-Stage Self-Propelled Snow Blower. At over $1,000, this model is on the more expensive side, but its two-stage operating system and 28-inch clearing width are useful for anyone who has a large driveway.

This gas-powered snow blower has a 254cc engine, and its 14-inch steel augers help you move through snow up to 21 deep quickly and easily. It’s self-propelled with six forward and two reverse speeds, and its auto-turn steering makes it effortless to guide around your driveway and sidewalks.

"The snow blower is gas-powered, but a 120-volt electric push-button start ensures that the unit quickly starts—no matter how cold it is. After a medium-sized storm, say 5 inches of new snow, it took us about an hour to fully clear our driveway—and that’s with a lot of attention to detail." — Justin Park, Product Tester 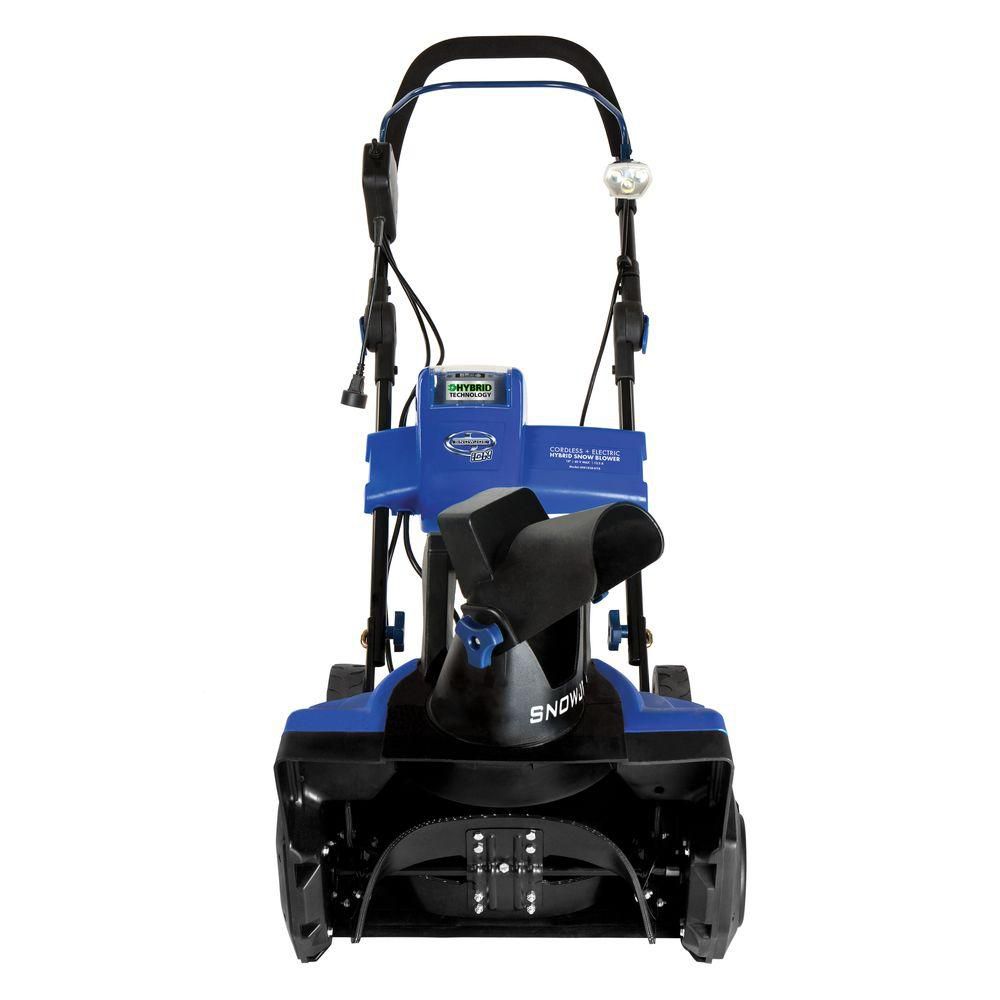 Electric snow blowers like this cordless model from Snow Joe offer less power, but they require significantly less maintenance. This particular battery-powered snow blower runs on a 40-volt battery that delivers up to 50 minutes of run-time per charge, and its 18-inch clearing width is ideal for small driveways, paths, and sidewalks. Its 180-degree chute can throw snow up to 20 feet, and the whole unit only weighs 32 pounds, making it easy to handle. 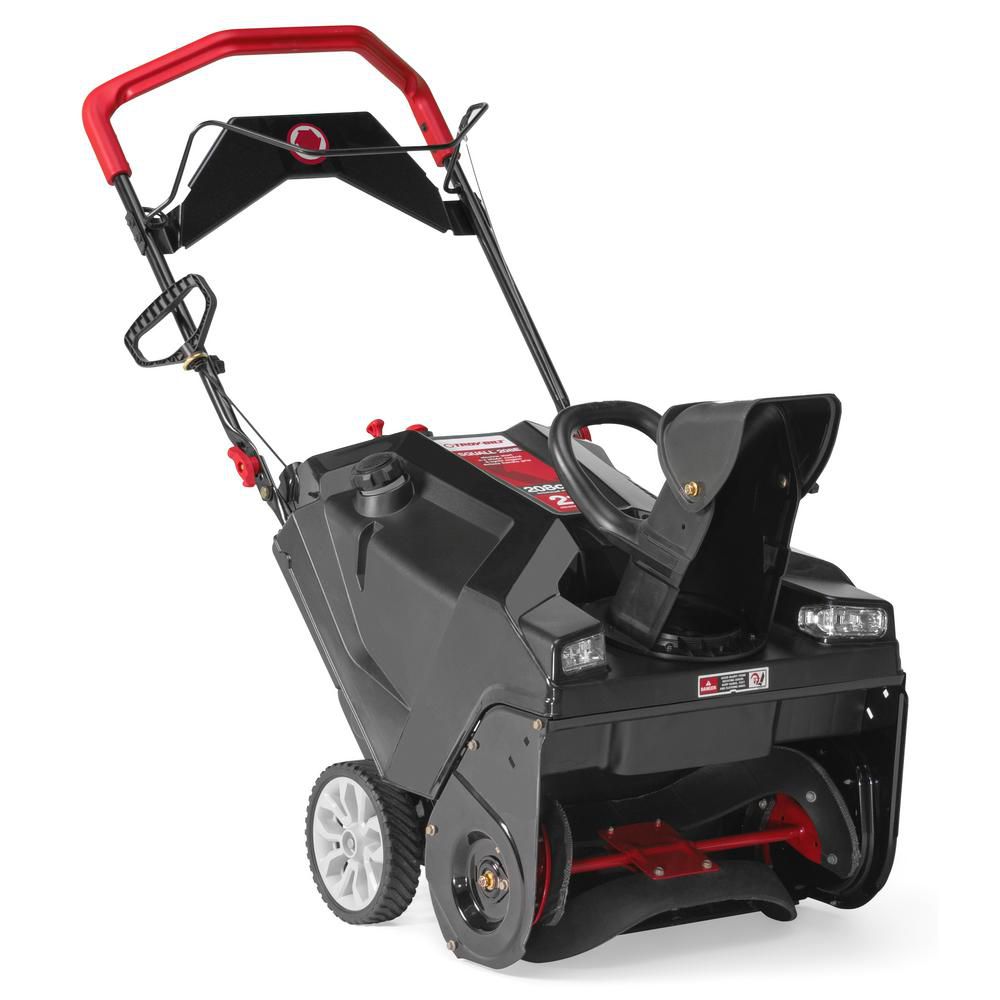 For a powerful, reliable tool that will last you for years, you need a model like the Troy-Bilt Squall 21-inch Single-Stage Gas Snow Blower. At just 103 pounds, this gas-powered snow blower is lightweight and easy to maneuver. Its 208 cc engine and 21-inch clearing tackle up to 6 inches of snow.

This snow blower has a manual pitch E-Z Chute control that allows you to adjust the rotation up to 190-degree rotation. The ergonomic handle folds down for easy storage, and dual-LED headlights provide additional visibility in low-light conditions.

"Starting the snowblower was a cinch—and probably one of our absolute favorite things about the machine. To get it going, the manufacturer guides you to insert the key, open the choke, press the primer three times, and then yank the pull-start to get the blower revved up. We were surprised that after just two pulls, the engine was running and we were off." — Lindsay Boyers, Product Tester

The best overall snow blower is the Troy-Bilt 28 in. Two-Stage Gas Snow Blower (view at Home Depot), which is a powerful and reliable gas-powered snow blower that can tackle almost anything. If you’re looking for a more compact option, go with the Troy-Bilt Squall 208EX Snow Blower, which gets high marks for its lightweight design and user-friendly pull-start.

What to Look for in a Snow Blower

Snow blowers are powered by both gas and electric motors, though electric motors are limited to lighter-duty single-stage models. Decide whether you want the convenience of electric operation or the extra power of a gas motor that also needs regular maintenance and fuel. Pay attention to how much power either type of engine is rated for on any snow blower you’re considering. Gas engines are rated in terms of horsepower, and electric engines are measured in amps.

Consider how wide a path the snow blower will clear with each pass. Typical clearing widths are anywhere between 20 and 25 inches. But some budget models may clear even less, and some more robust models may be able to do up to 30 inches or more. Narrower clearing widths mean you may need to make more passes to clean the driveway or sidewalk—extending the time you’ll be spending out in the elements. A wider clearing width will help you clear snow faster and get inside sooner.

Many snow blowers work at a single pace. But if you’re looking for a model with a little more kick, then shop around for one with variable speed control. Typically found on two-stage and three-stage snow blowers, speed control will let you move faster with a simple adjustment to a lever near the handgrips. Also, check to see where the speed control lever is located and whether it’s in a comfortable position for you to adjust. If it’s out of reach or hard to use, you won’t enjoy the convenience offered by this feature nearly as much.

Make it easier to get started quicker by choosing a snow blower with an electric starter. At the push of a button, the machine will be ready for action without the need for a manual pull-cord start, which can be challenging. Both electric and gas-powered models are available with an electric start option. If you want to be up and running faster when the snow flurries arrive or you hate struggling with a conventional starter, you should strongly consider an electric starter.

While the snow blower itself will do the majority of the heavy lifting, there are accessories and extras available to make the task easier or more comfortable. Below are some of the most common options to consider.

If the wind is blowing, you can expect to get more than a light dusting of snow as your machine throws snow out of its path. Blowback is an unpleasant part of the snow-clearing process, and a snow cab will minimize your exposure by protecting you with a clear, portable windshield of sorts. It can also help to block any icy wind that may be blowing your way.

If you opt for a gas-powered snow blower, you’ll have to drain the fuel for the warmer months of the year or develop a plan for keeping the fuel stable. Instead of wasting it, adding a fuel stabilizer to the tank can keep the gasoline ready and prevent it from breaking down over time. Just be sure to follow the manufacturer’s instructions for use, which will likely include filling the gas tank to the brim to avoid condensation and moisture build-up.

When shopping for a snow blower, it’s not uncommon to see warranty coverage that lasts for two or three years. Typically, single-stage snow throwers will have two years of warranty protection, while two-stage and three-stage machines may gain an additional year of coverage.

It’s important to know that most warranties are dramatically reduced if you use the snow blower for commercial purposes. In some cases, the warranty period may be as short as 90 days. But if you just plan to use the machine around your property or to clear the sidewalk in front of your house, you will have several years of warranty coverage to give you peace of mind.

This article was researched and written by Camryn Rabideau, a freelance writer who has written for The Spruce since 2017. A lifelong New Englander, she is no stranger to blizzards and knows the value of a high-quality snow blower, which can help make snow removal a much easier task.