Many older homes have electrical outlets, or receptacles, with only two slots for a two-prong plug. There's no third slot for the grounding prong found on most modern appliance plugs. A two-slot outlet often indicates that the home's electrical system does not have ground wires for the outlets, switches, or other devices. There may in fact be a grounding system that works via metal electrical boxes and conduit, but often there is simply no ground in most of the household circuits.

Two-slot outlets are perfectly legal (and generally safe) in existing homes, even though grounding does add some additional safety. However, in wet locations like bathrooms, you need more protection than just a ground wire. That's where a ground-fault circuit-interrupter, or GFCI, comes in. A GFCI outlet has an internal breaker that can shut off the power to the outlet in the event of a ground fault, which is most likely to occur when there is water around.

GFCI-protected outlets are required in all bathrooms (for new homes and remodels). if you'd like the same protection but you have old, ungrounded outlets, the good news is that you can simply swap them out for new GFCI outlets and get full GFCI protection, even though there's no ground wire. Just be aware that the new outlet will not be grounded (a GFCI does not add means of grounding, despite its name). As a bonus, GFCI outlets always have a ground slot, so you'll be able to plug in your three-prong plugs.

GFCI outlets can be wired in a couple of different ways. If you're just replacing one outlet in the bathroom, use the single-location method, which provides protection at a single GFCI outlet. The other method is called multiple-location, and it provides protection at the GFCI outlet and any additional outlets (including standard outlets) "downstream" on the same circuit. Multiple-location wiring requires two circuit cables in the electrical box—one for power coming into the outlet (marked with the word LINE on the backside) and one for power going out to the other outlets (marked with the word LOAD on the backside). Single-location wiring is shown here. If you want to use multiple-location wiring, consult the outlet manufacturer's wiring instructions.

Learn How to Test Your GFCI Outlets to Prevent Shocks 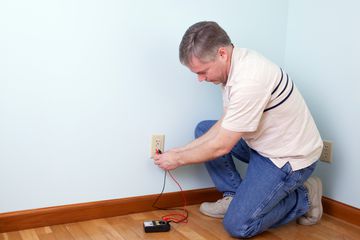