When Reese Witherspoon and her agent beau Jim Toth got engaged, he presented her with a custom-designed four-carat Ashoka-cut diamond, which left most of the world scratching their head and asking, "What is an Ashoka cut diamond?" Most had never heard of this rare and exclusive cut before, so we decided to share some much-needed information about the stone and its rich history.

What Is an Ashoka Cut Diamond?

An Ashoka cut diamond is similar in shape to both cushion and emerald cuts. It is a rectangular shape with rounded corners. Today, true Ashoka cut diamonds are exclusively available through diamond jeweler William Goldberg and its partners.

The Ashoka cut is based on a famous third-century diamond and named after one of India's greatest emperors, Ashoka Maurya. The original stone after which it was named, was a 41.37 carat, D color, internally flawless diamond that was legendary for its beauty, unique cut, and size. These rare and incredibly brilliant diamonds were said to "banish sorrow." The Ashoka cut is essentially a modified cushion-cut, with a rectangular shape and rounded corners. With 62 facets, it can help a stone appear larger than it is. Less than 10 percent of all rough diamonds mined each year even possess the potential to be carved into an Ashoka-cut. Because the extra-long rough stones needed for this cut are rare, brides and grooms choosing an Ashoka engagement ring can be confident that their ring will be unusual and special. It's especially appropriate for couples looking for an engagement ring that feels vintage.

Reese's stunning ring was created by jewelers William Goldberg, whose patented modern Ashoka-cut is available only through William Goldberg and its partners. It featured a colorless four-carat, Ashoka-cut diamond set in platinum with a pavé band. The elegant ring has a vintage, timeless feel. The proprietary cut creates extra sparkle and light through its various angles of cuts for an effect that is truly unmatched. Since the cut is patented, that makes this particular diamond even more rare and desirable.

Why Is It Special?

The things that make a diamond worth more in value or more beautiful to the eye are the Four C's: Cut, Clarity, Color, and Carat. These four aspects of diamonds are the benchmarks to measure the overall quality and value of a stone. Some would consider cut to be among the most important part of the equation because the way a diamond is cut can really affect the amount of light and sparkle the stone creates.

The right cut makes the most of a diamonds particular carat weight and color, emphasizing its sparkle in the most effective way while showcasing its color and clarity. The most traditional diamond cuts include round brilliant, cushion, emerald, princess, Asscher, oval, pear, marquise, radiant and heart. Thanks to specialty jewelers like William Goldberg, some brands are creating their own patented diamond cuts to make their designs more exclusive and rare for their clients. Of course, they are the most expensive of the bunch as well, because exclusivity comes with a price! The Ashoka Cut offers:

About 84 percent of brides in the United States receive a diamond engagement ring. The most popular styles include round, princess, marquise, emerald, and cushion cut.

Is Your Diamond Real or Fake? 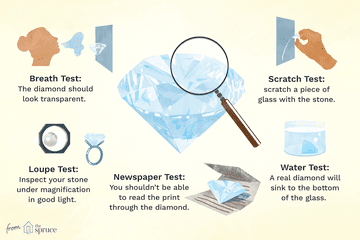