Move over soil and LECA! Pon is taking over the plant scene. In plant-collector circles, lately it's been nothing but pon this and pon that. Pon? All I could glean was that plant collectors were repotting some of their plants into pon, but I didn’t fully understand why or what the point was. Thankfully, there’s a lot of information out there about this new substrate.

We wanted to get to the bottom of this trendy growing medium. Find out what pon is, why plant influencers and collectors are using it, and how it has affected their plants.

Pon is a substrate—or growing medium—that can be used in place of soil.

If you speak to a plant parent who is familiar with pon, they’ll most likely mention the brand Lechuza, a company that creates many self-watering planters that help prevent overwatering (I made need to buy one for my poor Asparagus Fern).

Why Plant Collectors and Influencers Are Using Lechuza-Pon

The Lechuza-Pon plant substrate is probably the most popular version out there and is made of high-quality mineral stones. The company says using the stones helps you avoid pests like fungus gnats, prevents fungus, allows for a balanced nutrient distribution when fertilizing, and it has the “optimal air/water ratio for plants of 45% water and 55% air.”

Lechuza claims its pon helps keep plants healthier than soil. “The vulnerability to diseases is reduced. Even after some time, the structurally stable plant substrate does not condense and it keeps its air-permeable structure.

How Long Can You Use Lechuza-Pon?

Lechuza says its pon "can be used for years, without having to be replaced."

We spoke with two plant parents who have transitioned some of their plants to pon to find out whey they made the switch and what they like—and dislike—about it.

First, let's take a moment to applaud that IG handle. Go ahead, read it aloud. We'll wait... Get it?

Why she first tried using pon
“I first heard about PON, specifically the Lechuza brand in January of 2020. I started seeing some posts from other Instagram accounts and got very curious," Eula said. She decided to make the switch to pon because of the combination of a growing plant collection and being very busy. “I have been trying to look for a low maintenance system for some of my plants," she said.

Benefits of using pon
Eula also moved some of her Hoya collection that has been struggling into pon. “My Hoya Wayetii was in LECA. It has been dormant for quite some time. So I decided to switch the substrate to pon, and the difference of the leaf growth after a few weeks was amazing!  My Hoya Rigida was rooting in perlite, and I transferred it to pon and shot out two new leaves after 3 weeks.

"I have also tried rooting some Hoya nummularioides in different mediums such as water, LECA, perlite and pon. The cutting in pon rooted quicker than the others.”

Pon vs soil
“The difference in leaf growth and rooting in pon is significantly faster as opposed to other mediums. The sub-irrigation of pon circulates the water instead of standing water. I am hoping to see less root rot in pon and fertilization is well-balanced since it is coated with premium quality fertilizer. Soil dries up at the top, while it stays moist at the bottom and pon seems to have a balanced distribution of moisture...

"After switching some plants in pon, my plant care time has already decreased so I am looking forward to transitioning others to this kind of system so I can enjoy my plants without stress while staying busy.”

Why she first tried using pon
“There was soil ALL OVER my sinks (and apartment). I wanted to experiment with the substrate knowing it was a soil alternative, similar to LECA in terms of being able to be used as both a soil alternative or in a semi-hydro way with a cache pot, etc. I had a bunch of small cuttings I could test with, so I said why not?...There are also so many benefits!”

Benefits of using pon
Agatha holds virtual plant consultations for plant parents and she said that a lot of clients ask for tips on caring for their plants when they’re traveling, “I now recommend po, LECA, and semi-hydro [growing plants without soil] to those that travel a lot as it's a great way to manage watering, allowing the plants to get what they need.”

Learn the Basics of Hydroponics: The Most Efficient Gardening Method

Agatha has now transferred over most of her hoya collection to pon. She’s also switched some of her philodendrons and says that you could probably plant monsteras in it, too. Pon can have a downside with certain plants, she said: “It can be difficult to swap larger plants mostly because pon can take up a lot of room if you mix it yourself, but it can be done. I recommend testing hoyas, philodendrons, and even monsteras! I also recommend mixing your own PON as a more cost effective way too.”

Pon vs soil
“There are so many benefits: Less pest issues, as you do not have that same organic matter in soil that pets live and thrive off of. Less watering, and checking up on plants, and it's also a great way to root cuttings, or rehab any plants that might have suffered from root rot... I've enjoyed playing around with pon, and I even make my own now. It's super easy to DIY (and a lot more cost effective.)”

Overall, I think pon is a great alternative to traditional potting soil. I am going to give pon a shot with some of my 70+ plants. 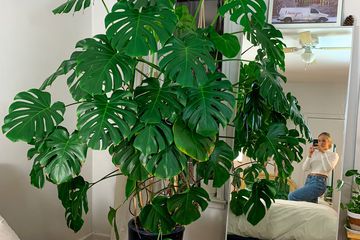