What Is Scandinavian Design? 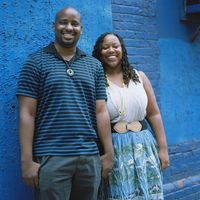 Jeanine Hays and Bryan Mason are AphroChic, a husband-wife duo of professional interior designers who cover luxurious and modern home decor products inspired by cultures around the globe.

Scandinavia refers to the northern European countries of Norway, Sweden, Denmark (and its territory Greenland). Depending on the context, some also include close neighbor Finland and Iceland, an island nation just to the North. While there are several historical and cultural similarities between these nations, there are also more than a few notable differences. The way in which they became united under the banner of home decor is a matter of marketing as much as history, beginning with changing social philosophies at the end of the 1800s.

The world was changing rapidly at the end of the 19th century. The Industrial Revolution made daily living conveniences more accessible, which in-turn influenced commerce and politics rapidly on a global scale. Modernism was sprouting up everywhere and, fearing a takeover of machines in all aspects of life, an impassioned plea emerged for a return to nature.

One such admonition came from the Arts and Crafts movement, led by designer William Morris. Arguing for the "diligent study of nature," Morris attempted to reverse the social course brought upon by the surge of industrialism. This was also one of the last gasps of the Romantic movement as the Art Nouveau movement was taking hold in Europe.

By the early 20th century, Art Nouveau was certainly a new style for a new century. Like most new artistic movements, Art Nouveau was, in many ways, a rejection of the forms that had preceded it.

Similar to the Arts and Crafts movement, Art Nouveau embraced the decorative arts of interior design, as well as fine arts and architecture. As Europe moved closer to the outbreak of World War I in 1914, the social commentary became more a part ofdazsf art and architecture. The revolutionary tone of European art through movements like the German Bauhaus, Russian Constructivists,​ and Swiss Dadaists mirrored a growing rejection of traditional notions of social class and aristocracy.

By the time the war ended in 1918, those structures were showing signs of weakening, as were the nature-inspired designs of Art Nouveau. Despite the devastation of war, only two short years separated the end of the conflict from the start of the Roaring '20s. By 1925, the naturalist designs of Art Nouveau had been largely supplanted by the visually-dazzling designs of Art Deco.

And, though it had been intended to celebrate a time of unheralded prosperity, Art Deco's reign as the preeminent design style of the nouveau riche was slowed by the onset of the Great Depression in 1929, then brought to a complete halt by the outbreak of World War II in 1939.

If World War I made apparent the cracks in the aging social structures of European nobility and the aristocracy, World War II broke them wide open. More than one empire lay in ruins and European powers struggled to hold on to the ill-gotten gains of colonization in Africa, South America, and Asia. The philosophical outlook of Europe with regards to art and society was also shifting, and that change was made evident in home decor as well.

To this point, whether it was Art Deco, Art Nouveau, or any of the preceding styles, beauty in the home was the providence of those who could afford it. The level of complexity or ostentation in the design was a direct reflection of the social status of the homeowner—bigger nearly always meant better. However, that feeling began to change in the aftermath of the war. Modernism, which began in-part with Art Nouveau, began to take on a new form.

A New Day For European Design

In light of two world wars in the same half-century, it was a popular view in the mid-20th century that humans were doing something wrong. Consequently, the design world was looking for an antidote for totalitarianism, which had been represented in design by the German-based Bauhaus style.

New social ideas were sweeping through Europe and, in design, they reversed older conventions around beauty and status. Beauty, which had once been reserved for the wealthy, and functionality—required by all—were combined, and those products were made available to everyone.

At the same time, the years following World War II saw the nations of Scandinavia banding together. This was particularly evident in the realm of design—through a series of conferences in Scandinavian cities during the 1940s, a design movement was forming.

This new approach to design was a combination of beauty, simplicity, and functionality. The element of functionality had been influential for some time in Scandinavian architecture, as seen in the Bauhaus Movement. The harsh climates of northern Europe (particularly during winter) had long influenced Scandinavians to prize utility and simplicity above decoration.

The formulation of a specifically Scandinavian style of modernist design may have begun during the '40s, but it was not until the beginning of the 1950s that it began to take shape as a recognizable entity. The midcentury modern style was heavily influenced by the appearance of Scandinavian design on the world stage in the early '50s. Most furniture arrangements were uncluttered and simple, giving the entire space a cozy, content feeling described as hygge in Danish.

One of the first major steps for widespread recognition occurred with the establishment of the Lunning Prize, otherwise known as the "Nobel Prize" of Scandinavian design. The award was named for Frederik Lunning, a New York-based importer of Danish designs, and was awarded for the first time in 1951 and every year thereafter until 1970. Shortly after the institution of the prize, Scandinavian design gained a champion in Elizabeth Gordon - editor-in-chief of House Beautiful magazine during this era.

Gordon described Scandinavian design as an alternative to Nazi-era design fascism, describing it as democratic, natural, minimal, intimate, and focused on the home and family, not the state. In 1954, Gordon arranged "Design in Scandinavia," a traveling exhibition of the best designs the collective nations had to offer. For three years, the show visited cities in the United States and Canada.

By the time Gordon's exhibition concluded its run, Scandinavian design was an internationally recognized commodity and one that had a particularly strong following in the United States. Though its popularity declined between the 1960s and 1980s, the renewed focus on sustainability during the 1990s and early 2000s breathed new life into the trend.

Rooms designed in the Scandinavian style tend to boast white walls to emphasize light, a neutral-heavy palette with pops of color, natural textures such as wood and stone, a lack of window treatments and carpets, and simple, no-fuss layouts that emphasize an elegantly minimalist aesthetic.

In a Scandinavian-designed room, you can also expect bare wood floors and white painted brick walls that add a rough texture while maximizing the light streaming in through large windows.

In addition to shaping the ways in which we create our rooms, Scandinavian design is also known for its many contributions to furniture design, which may be its most enduring legacy. After all, few American homes are complete without a trip to IKEA. The influence of Finnish designer Alvar Aalto's famous curved wood armchairs and Arne Jacobson's Egg, Drop, and Swan chairs continue to be felt to this day.