Most people don’t think “fire hazard” when they think of mulch. However, that’s exactly what your mulch can be if improperly applied.

If you’ve never heard of mulch fires or spontaneous mulch combustion it can sound made up. Sadly, mulch fires are very real, but there are things that you can do to prevent them, like being careful with where you place your mulch, how you care for it and what kind of mulch you use. We spoke with two fire experts about what causes mulch fires and how you can prevent them from happening in your own yard.

Types of Mulch and Why You Should Use Them

There are two beliefs about mulch fires out there. The first is that mulch can spontaneously combust causing fires. The second—and most widely believed—is that mulch catches fire due to improperly discarded smoking material.

Spontaneous mulch combustion is believed to happen when heat builds up within a thick layer of mulch, say six inches or more. Theoretically, if enough heat builds within that layer, it can start to smolder and cause a fire. Although not extensive, there is some research supporting that mulch can spontaneously combust in certain atmospheric conditions.

“Mulch may not burst into flame at the touch of a cigarette, but it can and does smolder, and fire can creep along under mulch beds and erupt long after the initial ignition as humidity drops and wind picks up,” she said.

Kevin Walters of the Tennessee Fire Marshal’s Office would agree. “Grass fires and wildfires can be caused by dry conditions, hot temperatures and an errant spark or stray cigarette. We cannot speak to the possible causes of spontaneous combustion.”

How Often Do Mulch Fires Happen?

Mulch fires are more common in some states than others.

Massachusetts, Virginia and Ohio recommend keeping 18 inches between mulch and the sides of structures. They also advise about the dangers of throwing away smoking material in mulch or potted plants. And rightly so after a massive mulch fire in a Virginia neighborhood gained national attention earlier this spring.

"There must be enough mulch fires that impact homes or businesses to motivate state fire marshals’ offices to warn residents in those states," Steinberg said.

Conversely, mulch fires are rare in some states, like Tennessee. Only 315 mulch fires were reported between 2016 and 2020, according to The National Fire Incident Reporting System. About two percent were ignited by spontaneous combustion or chemical reaction, while almost 13 percent were caused by cigarettes.

How to Prevent Mulch Fires

The last thing you want to happen after laying down a beautiful layer of fresh mulch is to see your house going up in flames. To avoid that, consider implementing these safety tips in your garden:

Which Mulch Is More Flammable?

A group of researchers at the University of Nevada did a study on mulch fires. They simulated conditions during a typical wildfire season, and could identify which of the eight common organic mulch types were most hazardous. Here’s how they ranked:

Mulch fires can happen but are completely preventable. If you take some of these simple steps to use the right, nonflammable mulch near your house and place the flammable stuff farther away, you’re already reducing the risk of a mulch fire. And, that’s good news for your garden and your home.

What Landscape Mulch Is Best for Your Garden? 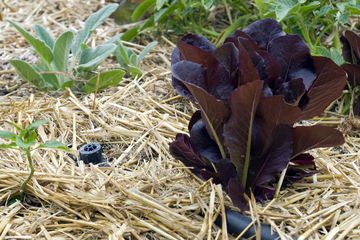 Featured Video
Article Sources
The Spruce uses only high-quality sources, including peer-reviewed studies, to support the facts within our articles. Read our editorial process to learn more about how we fact-check and keep our content accurate, reliable, and trustworthy.